Mento is a distinct style of Jamaican music that emerged in the early 1900’s and is not to be confused with Jamaican calypso. Mento, much like other Caribbean folk music, is a blending of African rhythms, Latin rhythms, and Anglo folksongs. Mento draws its traditions from African slaves brought to Jamaica and some European folk culture. Slaves were sometimes made to play music, singing European folk songs which largely influenced the development of Mento.

Inevitably, the slaves would infuse their own traditions with the music and it became common practice to sing Mento songs about social lives of the people.

In Jamaica, Mento is sometimes referred to as country music, because of it light hearted and simplistic lyrics as well as the omitting of electric instruments. A Mento band typically consists of a banjo, an acoustic guitar, hand drums and rumba box and is characterized by a 3:3:2 rhythms with an emphasis on the fourth beat in each bar.

Mento came to real prominence in the 1940’s and 1950’s before being displaced by ska, rock steady and reggae.

It wasn’t until the early 1950s that true Mento recordings first began to appear on 78 RPM discs. This decade was mento’s golden age, as a variety of artists recorded Mento songs in an assortment of rhythms and styles. It was the peak of mento’s creativity and popularity in Jamaica and the birth of Jamaica’s recording industry. These recordings reveal Mento to be a diverse musical genre, sometimes played with reckless abandon and other times with orderly precision.

In addition to mento’s African and European roots, by this time, it had also encompassed pan-Caribbean influences, as well as from American jazz. Although it was informed by a world of music, mento is clearly, uniquely Jamaican. And as Jamaica’s original music, all other Jamaican music can trace its roots to mento . Mento is still listened to in Jamaica today, but mostly be heard in tourist destinations. Early recordings of traditional mento are difficult to find. Some early mento practioners were Slim and Slam, Count Lasher and Everard Williams. 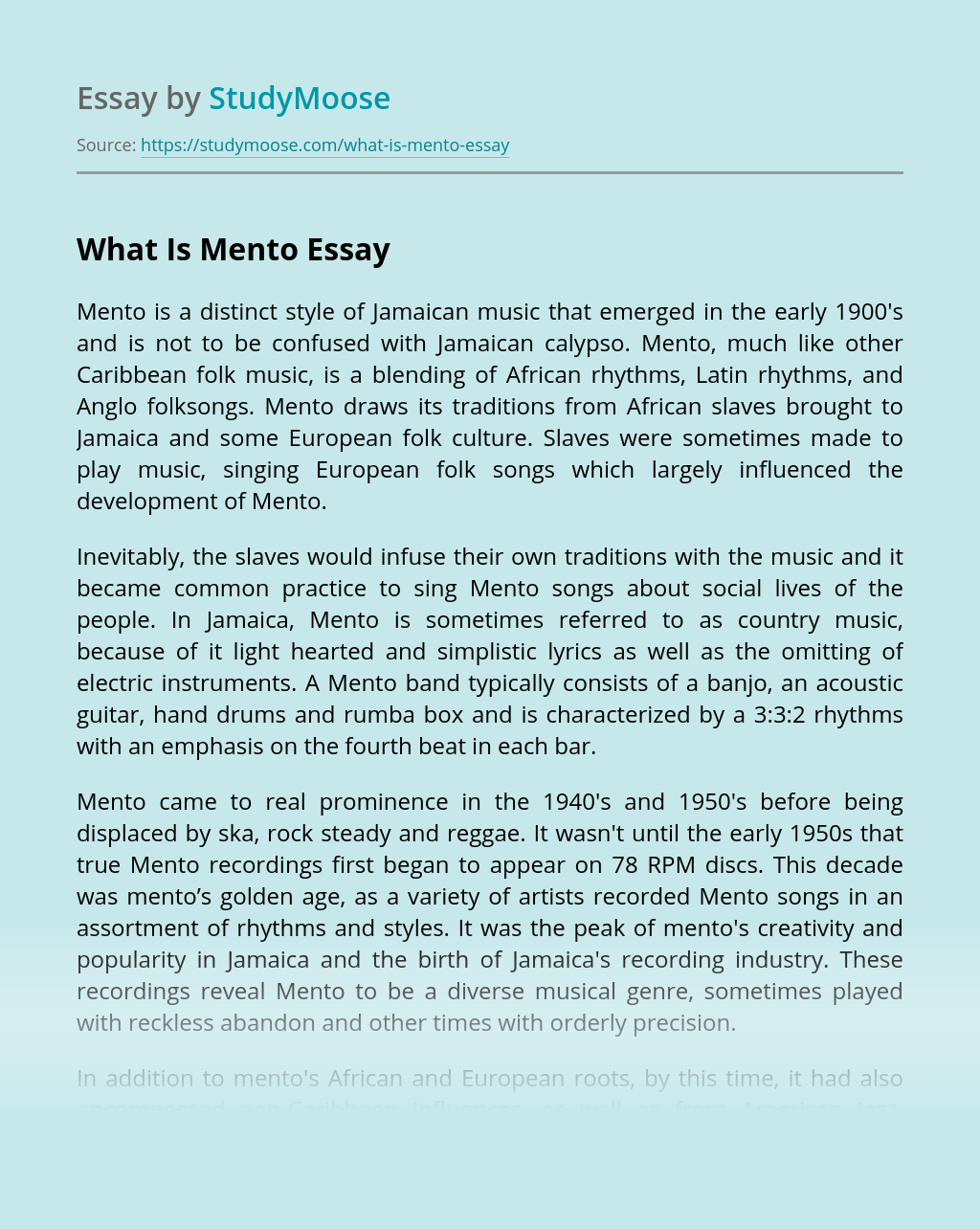