Get a verified writer to help you with Asian Literature

Asian Philosophy The basis of Eastern Asian philosophy finds roots in the principle of awareness of the relationship between all things and events. This principle explains the idea of the concept of the unification of an individual with the universe or a sense of oneness. Eastern philosophy encompasses the principles of Buddhism, Confucianism, Hinduism, and Taoism.

Buddhists believe in the principle of the Middle Way or to seek moderation and avoid self-indulgence or extravagance (Ling, n.d.). Buddhists accept the impermanence of nature and an interconnection of all things. Confucianism encompasses the principles of personal and governmental morality, appropriateness of social relationships, sincerity, and justice (Ling, n.d.).

Hinduism in India and Taoism in China are two other philosophies reigning from Eastern Asia. Hinduism expresses a belief in the idea of the Absolute. This principle explains the accepted human reality as an illusion because the spirit lives infinitely.

In the essay “Mother Tongue” by Amy Tan explains how all people speak in different languages and the subsequent categorization based on speech. Tan explains the different types of English she uses to write and the kind of English she uses when she speak with her mother. When Tan speaks to her mother she speaks broken English so that her mother understands rather than grammatically correct English. “I heard myself saying this: not waste money that way,” (Wong, 1996, p. 40). Tan explains she uses this type of English when speaking with her family even though her mother understands more English than speaking in a broken up pattern denotes. Tan later says, “When I was growing up, my mother’s “limited” English limited my perception of her,” (Wong, 1996, p. 43). Tan explains how in generally American’s view Asians who speak with fractured English as limited in knowledge or intelligence and how she herself was a victim of viewing her own mother through this stereotype. Tan uses the experience of her Asian mother to explain cultural racism in America and how English as her second language speakers makes daily communications difficult.

In “No Name Woman” by Maxine Hong Kingston explains how a Chinese mother explained life lessons and warnings to her children through the same stories she grew up being told. The mother in the story tells a bloody tale of a woman who disgraced herself by becoming pregnant and how the villagers destroyed the woman’s belongings and the family’s home as well as killing animals and taking items to bless themselves after cleansing the house. The story ends with the pregnant woman killing herself and her baby and is never mentioned by the family again as if she never existed. “Don’t let your father know I that I told you. He denies her. Now that you have started to menstruate, what happened to her could happen to you. Don’t humiliate us,” (Maxine Hong Kingston, n.d., para. 9). Kingston’s mother embraces traditional storytelling from over the top examples to discourage behavior in the younger generations.

Garrett Hongo’s “Kubota” tells the story of Hongo’s grandfather and how after the attacks on Pearl Harbor by Japan he and his family feared for their lives. Hongo’s grandfather, a Japanese American citizen, gathered for questioning by the FBI because of being part Japanese. It did not matter that he was born an American citizen as were the other Japanese Americans gathered it only mattered that he was Asian. “Many of these men–it was exclusively the Japanese American men suspected of ties to Japan who were initially rounded up–did not see their families again for over four years,” (Hongo, 1995, para. 7). Hongo explores the political prejudices endured by Japanese American’s during the war and how this treatment changed people. Hongo explained, “I am Kubota’s eldest grandchild, and I remember him as a lonely, habitually silent old man who lived with us in our home near Los Angeles for most of my childhood and adolescence,” (Hongo, 1995, para. 8).

Conclusion Asian American literature encompasses the philosophical and cultural traditions of the area in Asia known as Eastern Asia. The generally accepted principle throughout different Asian philosophies is self-actualization and oneness with the nature. In the United States Asian immigrants struggled to find work and cultural identity while assimilating to American culture. Often Americans stereotype older Asian Americans as not intelligent because of a fractured way of speaking English rather than speaking with proper grammar. Asians in America faced political racism during the war Asian Americans loyalty came into question because of the physical appearance of Asian descent. Asian American literature includes the colorful and dramatic storytelling style of Asian culture when explaining the importance of accepting and continuing traditional Asian values to younger Asian American generations.

Get a verified writer to help you with Asian Literature 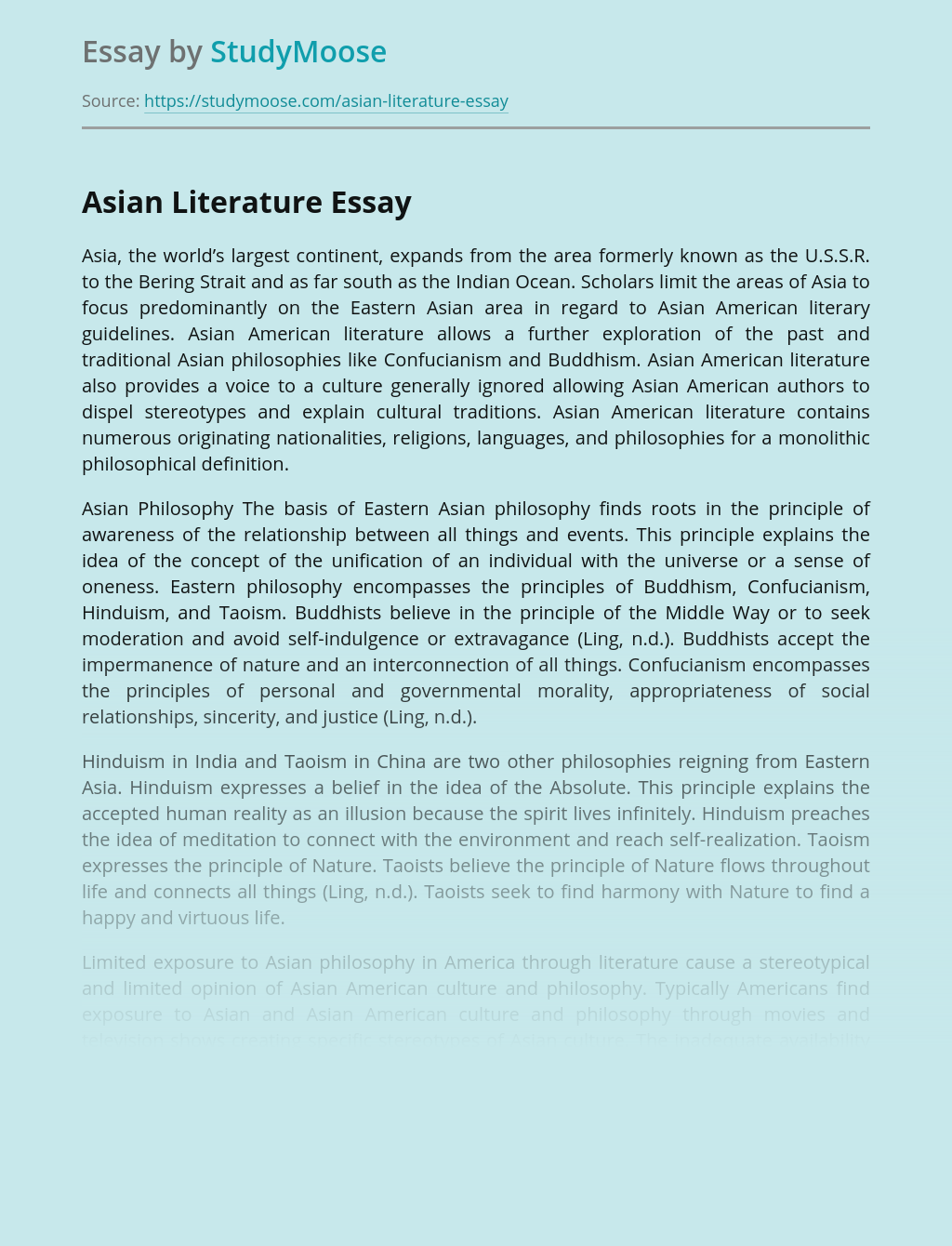 Kate Oliver’s analysis of Flannery O’Connor’s “Good Country People” claims that Joy-Hulga’s physical symbolizes her emotional impairments. By going into detail of the context of O’Connor’s original short story, Kate Oliver is able to make an overall moderately strong argument of how she feels she is correct in her analysis. Oliver is able to make...

Reflection Paper for Philosophy of Religion

Religion has been as part of society as far as its beginnings. All ancient human civilization had some sort of belief in a God or the transcendent. Beliefs have always been an issue within any human society. The belief of the transcendent gives humans a chance or hope for eternal happiness for people who abide...

Get Essay
Free Will and Religion: A Nietzsche Perspective

Free will has been studied for lots of centuries and has still puzzled common individuals, lots of thinkers, scholars, theories, literary figures, and theologians worldwide. It has been puzzled with numerous aspects such as requirement or determinism from which the specific marvel whether his actions are based upon self will or driven by conditions he...

Introduction As I was a Christian, my parents use to ask me to read different types of books about God and religion. One of my favorite books that I had read during my high school years was a book by Thomas Aquinas. Thomas Aquinas believed in a unique combination of faith and reason in his...

We all have our reasons for everything, and we all have our some type of faith in us. Reason can be generally as understood as the principles for a practical inquiry, whether intellectual, moral, aesthetic, or religious. Faith, on the other hand, involves a position that some claim that is not, or at least presently,...

God is the wonderful creator of the universe. He is all-knowing and all-seeing. Nothing escapes His notice. God is a special and intimate god who cares for and loves every single speck of creation He has created. God is the ruler of everything. He has complete and total authority over the universe. He has always...