As we can see, this is not the situation in Jamaican Creole. Case is always demonstrated by position. Any pronoun before the verb is the subject, and after the verb it is either the direct or indirect object. Other features to note are the lack of gender and absence of nominative and accusative case forms. Also lacking in Jamaican Creole are possessive pronouns like my, your, his, her, its, our, their. To demonstrate possession, Jamaican Creole either has the simple pronoun directly in front of a noun, (for example ‘my book’ would be ‘mi buk’), or adds the prefix fi-, (as in ‘fi-mi buk’ also meaning ‘my book’).

Don't use plagiarized sources.
Get Your Custom Essay on Jamaican Creole vs Standard English Just from $13,9/Page

Plural Marking Plural marking in Standard English is a hodgepodge of different forms borrowed and assimilated from many languages. The original Old English way of making plurals was either the addition of -n or -en or the changing of the vowel sound, as it is for Modern German.

For example child/children, man/men, ox/oxen, foot/feet. The Norman French way of making plurals was to add an -s, -es or an -x. Only the first two forms were borrowed into English at first, producing forms like hand/hands, eye/eyes, bus/buses. Recently the -x ending had been borrowed for words like bureau/bureaux, adieu/adieux, chateau/chateaux, but it is pronounced as if the x were an s. During the renaissance, Classical Latin and Classical Greek became fashionable, and although being extinct languages, they added a great deal both to the grammar and vocabulary of the English language, particularly in the fields of science and invention. Plurals produced at this period of time include datum/data, octopus/octopi, medium/media, index/indices, helix/helices, matrix/matrices.

These plural forms cause the most confusion not just to foreign speakers but also to a lot of people who speak English as their first language. Plural marking in Jamaican Creole is much more logical and easier to learn. In fact Jamaican Creole behaves like Japanese for the most part in that it does not generally mark the plural of nouns. To indicate plurality, animate nouns (and sometimes other nouns to be stressed) are followed by the suffix -dem. This produces structures such as ‘di uman-dem’ or ‘di pikni-dem’ meaning ‘the women’ and ‘the children’ respectively. Tracing roots of Jamaican CreoleThe unique vocabulary and grammar of Jamaican Creole did not just simply spring up as an easy way for plantation slaves from different tribes to talk to one another. Many words, phrases, and structures have an interesting etymology. (Etymology is a linguistic term for the history of the development of a word). In Middle English, there was a distinction between singular ‘thou’, and plural ‘you’.

This distinction has been almost completely erased apart from in some North Yorkshire dialects where the singular form ‘tha’ is still used. E.g. ‘tha’s nice’ means ‘you are nice’. In some English dialects an attempt has even been made to replace the missing pronoun. In Southern States of America ‘y’all’ is used; in Scouser (a dialect found in Liverpool) ‘youse’ or is used; and a common form in London is ‘you-lot’. In Jamaican Creole, the pronoun ‘oonu’ is found and this is similar to the form it has in modern Igbo (spoken in Nigeria) which was the most likely donor language. Forms of the pronoun (such as uno, unu, unoo) can be found in widely scattered parts of Africa in the Nubian and Nilotic language families and even as far as the Negrito languages of Malaysia. The word ‘seh’ as in ‘im tel mi seh…’ (he told me that…) has similar origins. Wow!!! Another interesting word commonly used is ‘pikni’, meaning ‘child’.

The word was borrowed originally form Portuguese ‘picaninni’. Prior to British dominance, it was used by Portuguese masters to refer to black slaves, who picked up the word and began using it to refer to their own children. In Jamaica today, despite its innocent original meaning (child), it has acquired a pejorative connotation because of its history in Jamaica. Two more interesting words that have spread across the English speaking world, but have their origins in Jamaica, are ‘buddy’ and ‘cuss’. These was a mispronunciations of ‘brother’ and ‘curse’ respectively. The first recorded use of ‘buddy’ was in 17; whereas the word ‘cuss’ is a word that has entered our vocabulary only since the late 1940s.

The difference in age of these terms shows how much influence Jamaican Creole has on the English speaking world, The word ‘buddy’ is even found in the Oxford English Dictionary and ‘cuss’ is used so much among the younger generation in particular, that it is only a matter of time before it too is added to the OED. in view of the popularity of fashionable culture and music forms that have their origin in Jamaica Jamaican Creole is likely to continue to have considerable influence of English as a global language, but should it be classed as a dialect of English or should it have official recognition as a language in its own right? Language Standardisation.

There are more salient differences between Jamaican Creole and English than there are between Swedish and Norwegian, yet the latter are classed as two separate distinct languages. Swedish and Norwegian people have almost no difficulty understanding one another, whereas some Englishmen will not have a clue what a Jamaican is saying. Similar cases are Czech and Slovakian, and Punjabi and Urdu, of which the spoken form is the same but only the written form is different. Many people who have stated that saying ‘mi de a di paak’ as opposed to ‘I am in the park’, sounds childish, are completely ignorant of the fact that ‘mi/me’ is a common indigenous Niger-Kongo form of the first person pronoun. I would have been easy for early Jamaicans learning this strange alian language, to continue using ‘mi’ in that position rather than switching to ‘I’. Also the English at that time didn’t exactly have schools and colleges to teach blacks the proper way of forming the first person singular nominative pronoun. 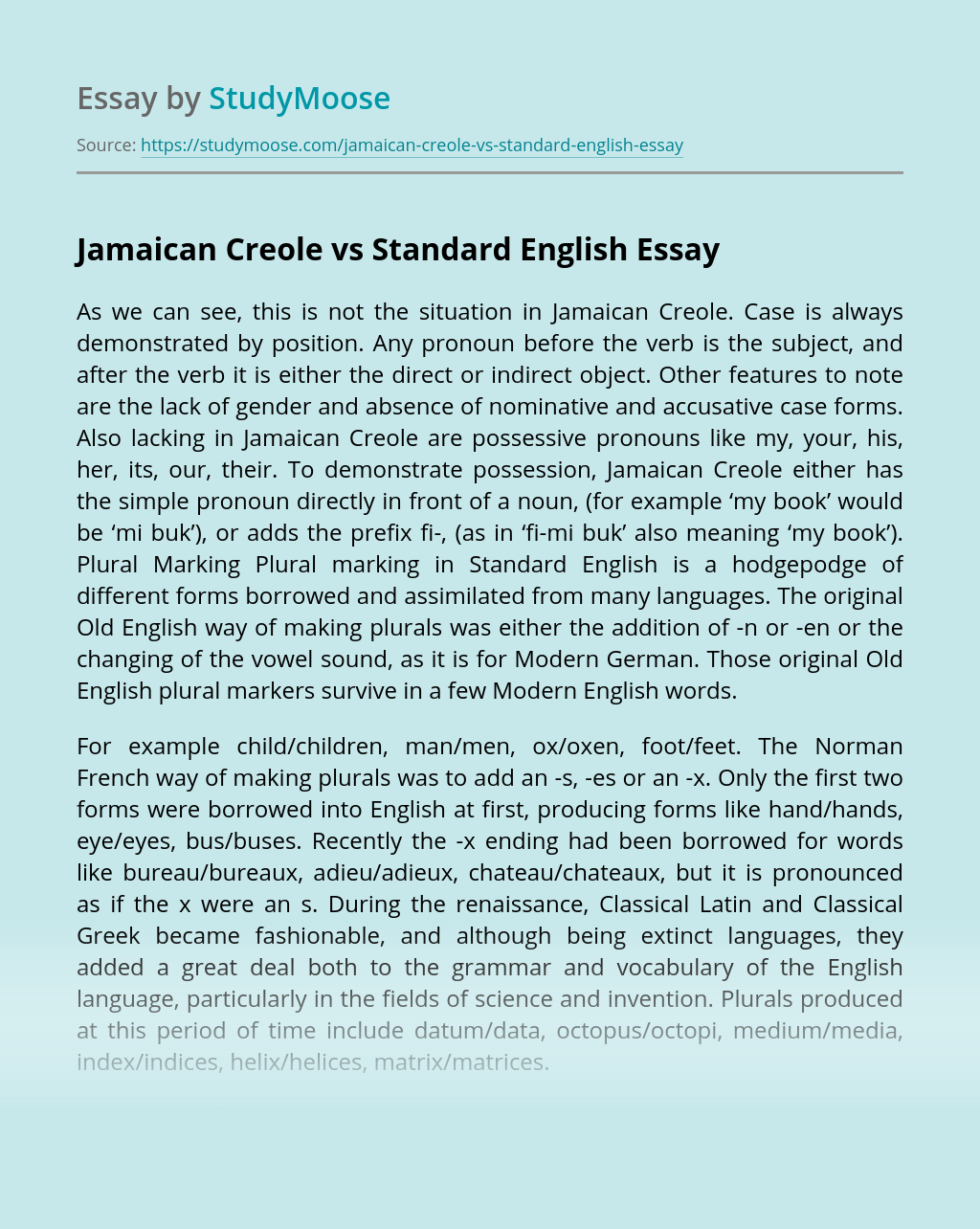 The importance of realism in British soap opera

Rate this post Corrie, ‘Enders and Brookie are all one. Family Affairs and The Archers are too. These shows are all a part of the great institution known as the British Soap Opera’s. Originating from when they were U.S. daytime drama programs sponsored by soap manufacturers, they were aimed at 1930’s housewives with Opera ironically...

Rate this post Ecology is the scientific study of interactions among organisms and their environment. In relation to The Lion King, ecology is the circle of life. Ecological succession can change a community by making exponential changes to the ecosystem over time, symbiotic relationships are important in maintaining a stable ecosystem because they provide competition,...

Get Essay
Atticus Finch Character From To Kill a Mockingbird

Rate this post In the final courtroom scene in the film “To Kill a Mockingbird”, Atticus Finch is given the case of a life time when he gets the opportunity to protect Tom Robinson, a black male who is being falsely implicated of raping a white female in the 1930’s when inequality and bigotry was...

Rate this post Because the annual Fifties sci-fi movies have actually portrayed robotics as really advanced devices developed by human beings to perform intricate operations, to deal with humans in safe vital objectives, in hostile environments, or regularly to pilot and control spaceships in galactic travels. At the very same time, however, smart robots have...