Probably one of the most lively and rich cultures of the world is of the Jamaican culture. It is perhaps due to its exotic surroundings and the various regions of its origin. Today in Jamaica, there are obvious influences of African, English, Spanish, and Indian. Being only the third biggest island in the Caribbean its impact is huge on the rest of the world.

The official language of Jamaica is English. However, most civilians in Jamaica speak patois. Think of it as an extremely slurred accented speech of English with hints of African, Portuguese, and Spanish appearing here and there.

Don't use plagiarized sources.
Get Your Custom Essay on Jamaican Culture Just from $13,9/Page

Most of the time just knowing English will help you understand what people basically are saying.

The religions in Jamaica are wide and varied. However, statistics show that over half (61.3%) of all Jamaicans are Protestant. There is also a good deal of participation in spiritual cults of not-really-defined religion (almost 35%). Religion is highly held in Jamaica and can affect from what people where to what they eat.

Sometimes cults in Jamaica resort to violence against other cults.

The education system in Jamaica has four basic levels: early childhood, primary, secondary, and tertiary. Presently, 703,600 of Jamaica’s estimated 2,650,000 people are enrolled in the education system. About 80% of all teachers are professionally trained. Jamaica currently holds an 85% literacy rate for total population (81% for men alone and 89% for women alone). Currently in Jamaica, only 3% of the enrolled education students are enrolled for college level education, 32% for junior high and high school level, 45% for elementary level, and 20% for ages 3-5 yrs.

The majority of the people in Jamaica usually live in or near the cities in low-income housing. However, some still live rurally for agricultural purposes.

There are many holidays and festive occasions in Jamaica. Jamaica’s national holiday is its Independence Day on the first Monday every august. Most of Jamaican culture is expressed through stories, songs, and dances of important figures. Here are just a few examples of Jamaican culture. One old custom now only practiced in rural areas is that of taking the baby’s naval string cord after they are born, waiting 3 days, and burying it in the ground and planting a tree on top of the cord. Another belief is that of a mother cannot get wet the first few days after birth otherwise she will get sick and die.

In Jamaica, lavish funerals are required to give respect to the dead for they will rise on the third night after their death. There are also certain characters of folklore. One is Anancy. He is the spider man known for his trickery. There is also the children’s character of Big Bwoy. In Jamaica there is also many festivals. The Gran’ Market is a pre-Christmas celebration. Obeah is a general term for black magic. Kumina is a popular ritual practiced only by certain sects for religion. Dinky-Mini is a dance and song used to help cheer up the family of a dead person. Hosay is a festival particular to Muslim/Indian sects.

Most people in Jamaica have somewhat balanced diets and eat depending on religion and season. A typical breakfast is the country’s fruit, the ackee. Lunch is usually light meat or vegetables while dinner consists of goat, pork, seafood, rice, and beans. Skyjuice, coconut juice, and tea are popular drinks. Skyjuice is the American equivalent of a slushy.

On average families have about two children in cities but having many more in rural areas, especially on farms. The parents usually work while the children are off attending school.

In Jamaica, almost every festival has its own unique dressing design. The most popular and renowned is that of the simple plaid cotton design of Bandana. Women’s dresses are of three tiers (big ruffles) and they are known to be adorned in beads and braid their hair intricately. 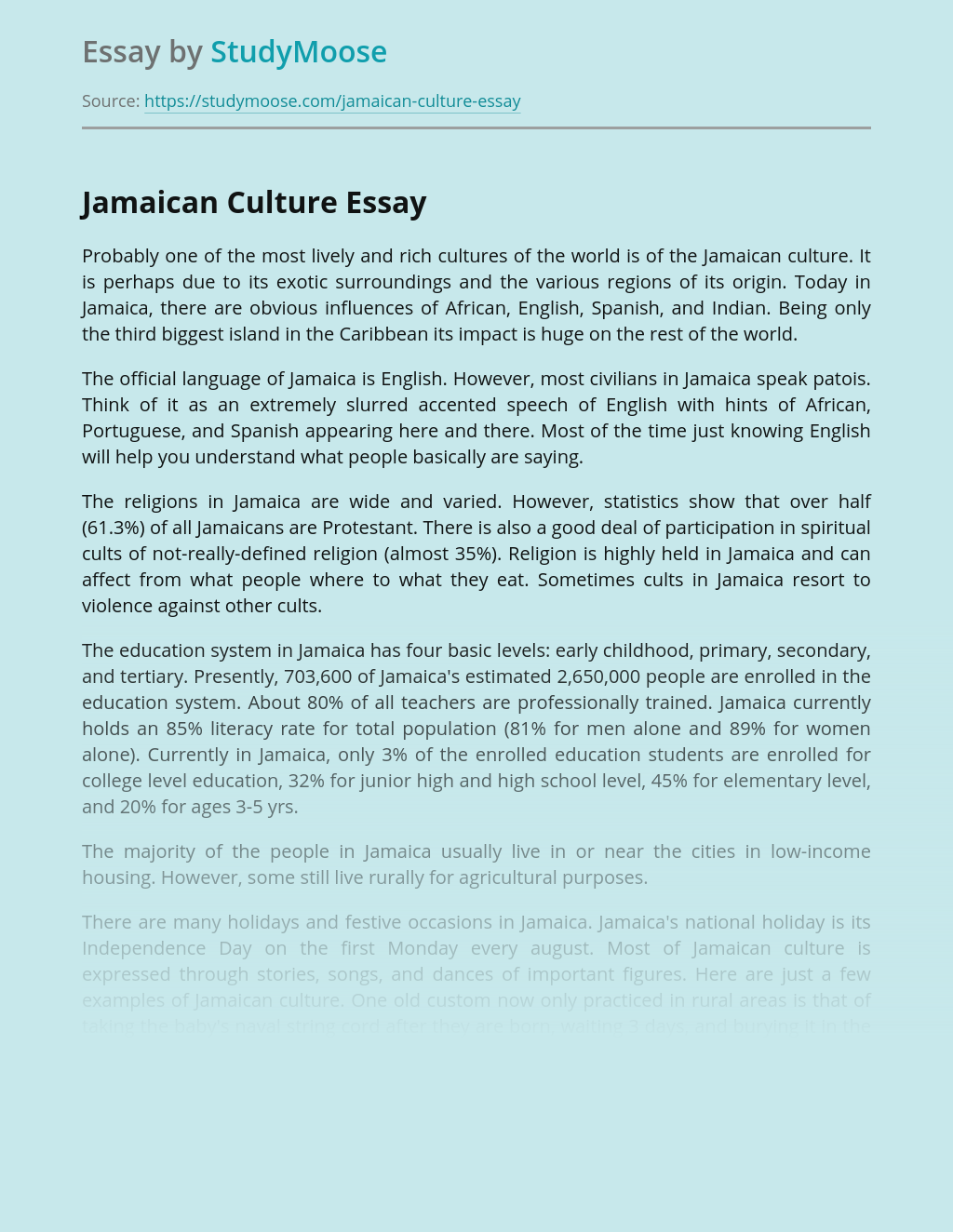 I would first and foremost like to thank God for guiding me and keeping me safe during the time of conducting the SBA. I would also like to thank Him for blessing me with the required tools to complete this assignment. I would like to thank my mother for helping me to get in contact... VIEW ESSAY

Heart of Darkness is in its entirety not an allegory. Its surface is too profound and meaningful to allow itself to be interpreted in more than two ways. There are however several parts in the novel that hint at the opposite and that prove that the context of the novel can be seen from more... VIEW ESSAY

View sample
Get Essay
European Rivalry in the Caribbean

The Spanish monopoly in the Americas was established the moment that Christopher Columbus made landfall in Bahamas, this was way back on his first voyage in 1492. Soon after, her monopoly increased in size, wealth and fame. This was brought about by way of her island and mainland territories; a few being Cuba, Puerto Rico,... VIEW ESSAY

In the early modern period, silver became the currency of the world. Never before had any good been so zealously sought after or acquired. Not even the grand spice trade routes over Asia could compare with the enormous scale and complexity the discovery of deposits of silver in Spanish America and Japan brought to global... VIEW ESSAY

View sample
For the Period Before 1750, Analyze the Ways in Which Britain's Policy of Salutary Neglect Influenced the Devlopment of American Society

For the Period Before 1750, Analyze the Ways in Which Britain’s Policy of Salutary Neglect Influenced the Devlopment of American Society as Illustrated in the Following: Legislative Assemblies, Commerce, Religion As soon as the Americas were discovered, tens of thousands of people wanted to migrate across the sea. The fastest the voyage could be made... VIEW ESSAY