Comparison and Contrast of Hispanic Culture and Anglo-American Culture

There is no universal culture amongst the world society as each community embraces a unique culture that guides and defines their behavior. The differences that are exhibited within any particular group of people in a country or a cultural group are usually greater than those differences that may be in a homogeneous group. The differences are usually noted in level of education, social standing, religious beliefs, personality definition, previous experiences, and affection that prevails in the home among other many factors that have an influence on human behavioral and cultural practices.

Don't use plagiarized sources. Get your custom essay on
“ Comparison and Contrast of Hispanic Culture and Anglo-American Culture ”
Get custom paper
NEW! smart matching with writer

When conducting cross-cultural studies, comparison becomes the main essence of the study thereby ensuring that generalized assumptions are inevitable as the researchers seek to categorize the cultural groups.

We need however to be cautious that generalizations may lead to serious negative impacts especially when they are made from faulty observations. This paper shall aspire to give a comparison and contrast of the Hispanics and the Anglo-American cultures

Hispanics: An analysis of the Hispanic community in the United States is not an easy task as there are several Hispanic groups in the country having different backgrounds especially in relation to their point of origin.

The Hispanics are therefore not a single group with similar cultural characteristics as they exhibit differences in regard to political views, customs, religious beliefs, familial and other conventions that distinguish each group from the others.

The focus on the Hispanics in this paper shall focus on four categories which include the Mexicans Americans, the Puerto Ricans, Cuban Americans, and those from the Central American region. The Mexican Americans trace their place of origin from Mexico while the Puerto Ricans are considered the citizens of the United States given that Puerto Rico is a United States’ territory. The Cuban Americans on the other hand are those who fled Cuba due to the political and economical turmoil that has been experienced in their country for quite some time.

Lastly, the Hispanics from the central part of the Americas are said to have originated from various countries in the region (Kanellos, 1994). The Anglo-Americans: The Anglo-American refers to the ethnic group of individuals of European origin. The term ‘Anglo’ has come to be used to refer to the English speaking Americans with little reference to their particular origin more like the term Hispanic has been used to refer to the various groups that make the Native American population.

The Anglo-Americans comprise of English speaking Americans who are in most instances Protestants with minority of them adhering to the Roman Catholicism. The term Anglo-American has been used to refer to all those individuals who originated from countries that traditionally spoke English as their main language and also those whose families have adopted the English speaking culture in the United States and Canada to perfection (Diaz-Guerrero & Szalay, 1991). Comparison and Contrast of the Hispanic and the Anglo-American Cultures:

As stated earlier, there are various groups in the United States which form the larger Hispanic category. Nevertheless, the different groupings within the Hispanic block have distinct features which come out especially when compared to the Anglo-American way of doing things. The Mexican Americans for instance, are known to speak Spanish and they are taught in bi-lingual classes which involves English as their second language. The Mexican Americans have various values which are unique of the Anglo-Americans.

The familial values of the Mexican Americans for instance are uniquely different from that exhibited by the Anglo-Americans. The Mexico Americans for instance emphasizes on the social structure that is rooted in the family unit (Kanellos, 1994). Though the women are greatly respected in their culture, the Mexican Americans holds that the women are inferior to their husbands in the homes. The husband is seen as the figure of authority and the chief decision maker for the family. They usually cherish large families and extended family ties are maintained.

This is in contrast to the typical Anglo-American culture where both the man and woman in the house enjoy equal or almost equal right in the decision making process for the family. The family is based on democratic principles and small nuclear families are cherished. The bond for extended family ties is usually loose in the setting of the Anglo-American culture. Most Mexican Americans are also observed as Catholics and they put emphasis on the holding of religious moral values than their Anglo-American counterparts.

Politically, the Mexican Americans have not been quick to stamp their authority in the political landscape within the United States save for the appointment of Alberto Gonzales as America’s Attorney General (Kanellos, 1994). This is in contrast to their Anglo-Americans who have dominated the political scene with most being identified with the Republican Party. Economically, the Mexico-Americans have remained generally sidelined as their Anglo-Americans counterparts continue to dominate the economic landscape.

From the study done in 1989 it was revealed that Mexicans Americans earned 21% wages lower than the Anglo-Americans. Though these statistics can no longer be relied upon die to the passage of time, there still remains a significant gap between economic gains by these two groups (Franklin, 2010). The Puerto Ricans are well known for their general proficiency in Spanish and English languages. This concept has made life for this group of Hispanics more bearable than any of the other Hispanic groups.

Contrary to the Mexican Americans, most of the households amongst the Puerto Ricans are headed by females. The Puerto Ricans submit to various religious groups which include Baptism, Catholics, Methodist and any other of the world religion more like their Anglo-Americans counterparts. Politically, the Puerto Rican have limited access to the same rights and political privileges enjoyed by any other American citizen though Puerto Rico is considered a United States’ territory from the year 1917. They are for instance not allowed to take part in presidential election.

They are however exempted from paying the federal income tax. Though they have limitation on the rights associated with citizenship, the Puerto Ricans continue to enjoy exceptional unrestricted US migration (Diaz -Guerrero & Szalay, 1991). The Cuban Americans have come from a difficult background that was characterized by unstable political environment in their backyard and difficult economic conditions. They however carried with them much of the Spanish culture given that the Spanish had great influence on the Caribbean Island.

Most of the Cuban Americans are Catholics though some traces of Protestantism, Jewish, Santeria, and nonreligious beliefs can be traced. It has however been noted that most Cuban Americans have been assimilated in the mainstream culture meaning that they have taken most of the Anglo-American culture leaving their own though they have kept a small portion of their original culture (Diaz -Guerrero & Szalay, 1991). The other Spanish group from the Central American region comprise of the Venezuelan Americans most of whom are Spanish, Italian, and Portuguese.

Though most of them came to stay in America after the completion of their college studies in the US, they still maintain their familial ties which are very strong. They imbue in their children the value of family as an important aspect of the society at an early age. The familial ties are so strong that they at tomes make it hard for them to get assimilated in the American mainstream culture. Most of the Venezuelan Americans are Catholics though most do not hold religion in high esteem as the other Hispanic groups (Franklin, 2010).

Other general aspects of the Hispanic groups’ culture include privacy which is only handled by the family members. They value modestly as part of their culture and that the area between the waist and the knees is considered as private. This is not common with the Anglo-Americans who are often exposes their body parts that would otherwise be considered private in Hispanic culture. The old members of the family are greatly respected given their experience with life.

In regard to health practice, the Hispanics are known to be emotionally expressive and individuals are expected to be pampered when they fall ill. To most Hispanics, birth control measures are not entertained a part from the natural ones given that most are Catholics. They also view thinness as a problem and plumpness is considered ideal. This is in contrast to the Anglo-Americans who are pragmatic on heath issues and readily accept the birth control methods and also despise plumpness of the body (Culturediversity. rg, 2008). In a study conducted by Pablo G. Cardona, Bonnie C. Nicholson, and Robert A. Fox, in the year 2000 entitled ‘Parenting Among Hispanic and Anglo-American Mothers With Young Children’ it was found that Hispanic mothers had higher frequency of discipline and a lower frequency of nurturing with their young children compared to their Anglo-American counterparts though no differences were recorded in the expectations of both the Hispanic and Anglo-American mothers (Cardona, Nicholson, and Fox, 2000).

Conclusion: The cultural comparisons between the two cultural categories can go on and on without any sign of stopping any soon. The cultural differences observed between the Hispanics and the Anglo-Americans are reflected most in the familial affiliation, language, and religion. Most of the Hispanic groups in the United States have very strong family bonds, they subscribe to the Catholic faith and that they speak Spanish.

Comparison and Contrast of Hispanic Culture and Anglo-American Culture. (2016, Sep 12). Retrieved from http://studymoose.com/comparison-and-contrast-of-hispanic-culture-and-anglo-american-culture-essay 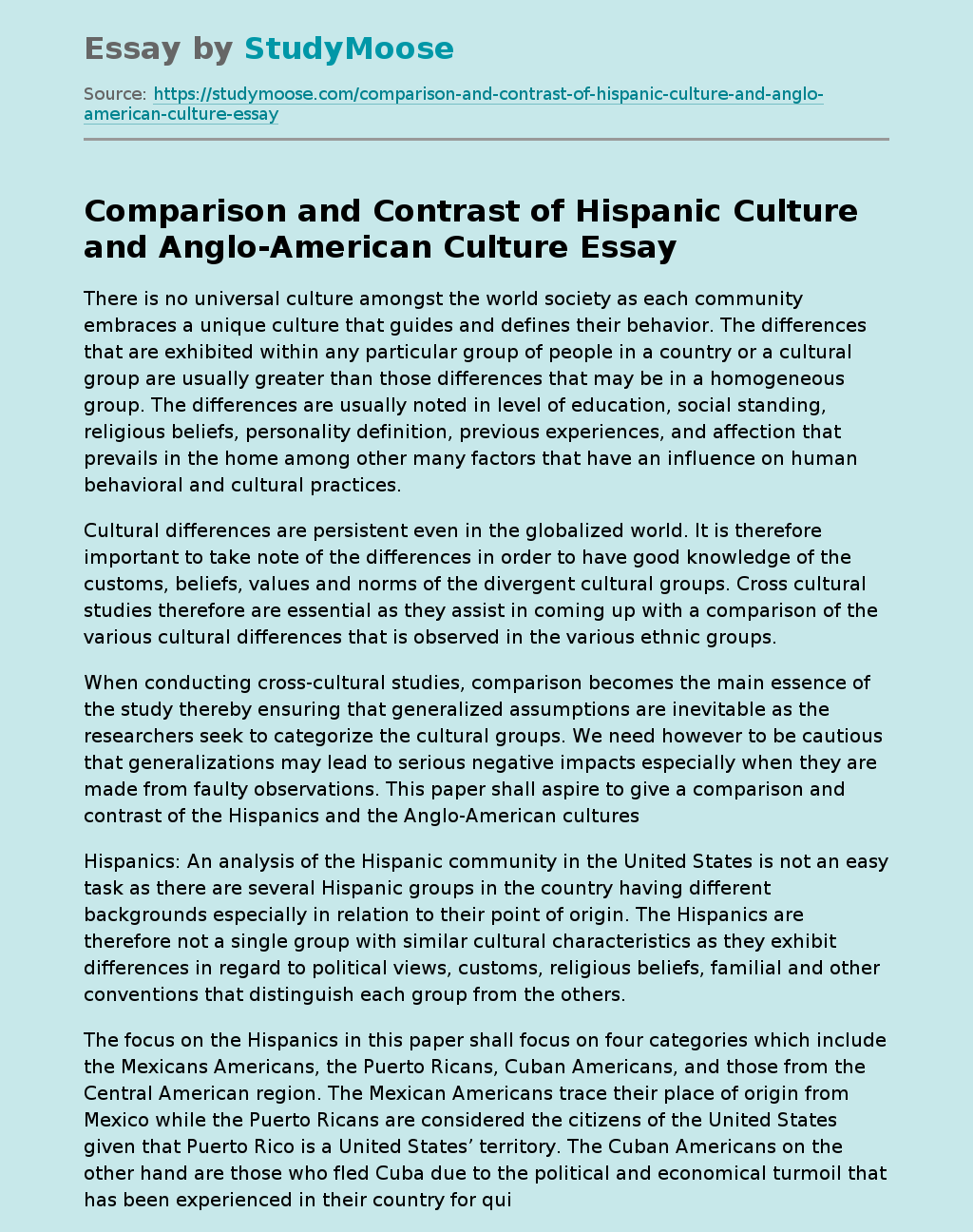