Frida Kahlo was a Mexican artist that has become one of the most influential and famous painters in history. Her legacy has left a huge impact on Mexican culture and popular culture that will continue through generations.

d.) Kahlo spent most of her childhood and adult life at her family home in Coyoacan, Mexico in La Casa Azul, which now The Frida Kahlo Museum. Because Kahlo was bed ridden for a large portion of her life, she began to paint. This was a huge part of why she began her artistic career. She often painted self-portraits. Throughout her artwork she portrays very personal themes that were often autobiographical. They seemed like detailed accounts of her life experiences.

She made about 200 paintings, sketches, and drawings. Frida Kahlo included a lot of symbolism in her art. She truly expressed herself through her art and “much of Frida’s work must be understood as extreme suffering turn lucidity into prophecy, to express extreme suffering pictorially, without allowing for pity or self-pity (Monsivais, et al. 15). Kahlo had to overcome a lot of obstacles throughout her life, often medical ones. At the age of six, Kahlo contracted Polio (Kismaric and Heiferman,1992,100). This cause her right leg to be thinner and shorter than the other.

In September 1925, when Kahlo was 18 years old, she was involved in a terrible bus accident. The accident left her with a broken spinal column, collar bone, pelvis, and ribs (Goozdich, 2016). Kahlo faces many health issues throughout her life. She was obviously in a lot of pain and it clearly transcended into her art. To cope with the constant pain, Kahlo turned to painkillers, smoking, and alcohol (Kismaric and Heiferman,1992,100). Because of her medical complications she was unable to bear children. The had 3 miscarriages and has multiple paintings dedicated to her devastation of not being able to give her husband, Diego Rivera, a son. She had over 32 operations in the span of 30 years, so we could only image the toll the surgeries had on her physical and mental health.

As an influential artist, Frida Kahlo had an immense impact on Mexican culture. She introduced traditional Mexican attire to the mainstream since she would often travel with her husband. People in the United States and Europe because curious of the tradition attire and often stopped to admire Frida. She is the reason why Mexican costume became internationally recognized. According to Walker, “Kahlo and her husband… were the champions of Mexican culture independence and had consistently sought to establish a national renaissance based on the material culture of Mexico”. What Frida Kahlo wore, became a huge part of her presence and her persona. There is even an exhibition at the Casa Azul dedicated to the type of clothing that Kahlo wore. Items included “jewelry, ceramic wares, figurines, feather-work, and ex-votos. [There was also] dresses, shoes, corsets, shawls, embroideries and samples” (Walker 294). What she wore wasn’t the only attribute that stood out. She proudly displayed her distinctive Latin features like her predominant unibrow and mustache. Photographs often showed her wearing dresses and Mexican hairstyles that mostly consisted of thick braids. Her hair was often decorated with ribbons and sometimes fresh flowers. Kahlo favored a traditional “Tehuana dress from Tehuantepec Isthmus in Oaxaca… The traditional society there was matriarchal, administered and dominated by woman who’s attire symbolized female power and independence” (Walker 295). This type of clothing was typically viewed as Mexican peasant clothing, but Frida wore it to “express her political and aesthetic ideals” (Walker 297). Everywhere she went, Kahlo celebrated her culture with her clothing. Her clothes played a huge role in her life. Not only was it an outlet of expression, but it also helped hide the scars of her many injuries and procedures as the skirts she wore were long and covered her disproportionate legs. Frida Kahlo’s unconventional style inspired many fashion trends. Frida also has a huge influence in today’s fashion industry, which is not surprising because she was featured in the October 1st, 1937 edition of Vogue. (Kismaric and Heiferman,1992,100).

Another reason why Frida Kahlo has become one of the biggest artists in Mexico is because of her exceptional solo exhibits. She made history in 1939 when “the Louvre purchased ‘The Frame’ making her the first Mexican artist to be featured in their collection” (Kismaric and Heiferman,1992,100).

Frida Kahlo has become an icon in popular culture. Despite it being 60 years past her death, she is still one of the most recognized personalities to exist. It is evident that “the cult of Frida Kahlo, and the widespread commercial use of her image, is a phenomenon that has taken on a life of its own” (Thackara,2017). There are all kinds of commercialized merchandise including shirts, posters, shoes, dolls, etc. that are sold every day. Kahlo is also so popular that she was featured in the 2017 animated film “COCO”. She was depicted in the afterlife as a skeleton that still found ways of expressing her creativity.

Kahlo has also become a huge source of empowerment and inspiration for woman over generations. She was very strong, resilient, and often took control of her own life. Her paintings were personal, intimate, included nudity, and were “racy” in her time which are all characteristics of true feminism. In the 70’s during the feminist movement, Frida was admired as an “icon of female creativity” (Goozdich, 2016). She became admired by many communities including the feminist, the LGBTQI, and Chicano communities.

Frida Kahlo’s legacy is incomparable. She tackled social issues, political activism, and constantly battles social norms. For one, Kahlo was openly bisexual which was considered taboo in her time. It was said that we had affairs with prominent women at the time. As for political activism, she was very involved in the Mexican Revolutionary War. In 1927, she joined the Mexican Communist Party (Wikipedia). Frida once said “I must fight with all my strength to turn what little positive energy my poor health has left me toward aiding the revolution. The only real reason for living” (Monsivais, et al. 17). This demonstrates the passion she had for the effort. She was constantly pushing boundaries and challenging social norms. In a family portrait, Frida wore one of her father’s suits. Sometimes she would experiment with men’s clothing and hairstyles. She was way ahead of her time.

Finally, despite her physical hardships and many struggles, “Kahlo’s work has been celebrated internationally as emblematic of Mexican national and indigenous traditions and by feminist for what is seen as its uncompromising depiction of the female experience and form” (‘Frida Kahlo,’ n.d.) 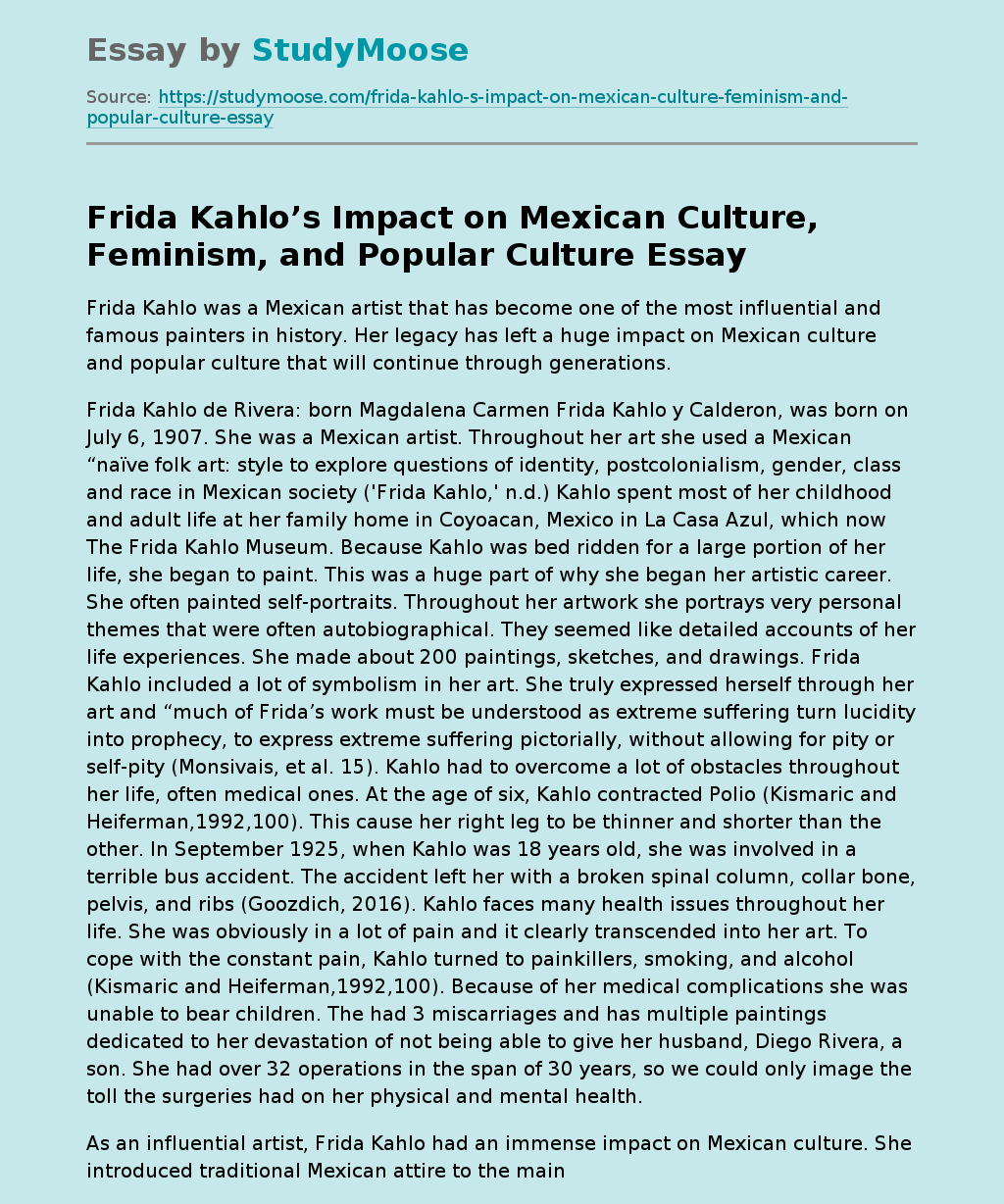