Frida Kahlo, in her self portrait paintings, often illustrates herself wearing a Mexican woman’s traditional dress with a flowing hair which somehow introduces a part of Mexican’s feminine identity. Her self portraits are also known for the incorporation of “pre-Columbian jewelry, thereby demonstrating her credentials as a member of Mexico’s indigenous community and her femininity in eccentric fashion” (Stremmel and Grosenick 60). However, her Self Portrait with Cropped Hair stands out among her self-portraits since she painted herself with masculine physical features that oppose her usual visual attributes of femininity.

Don't use plagiarized sources. Get your custom essay on
“ Frida Kahlo’s “Self-Portrait with Cropped Hair” ”
Get custom paper
NEW! smart matching with writer

In the portrait, it is very apparent how Kahlo “rejects the traditional feminine image by laying aside the insignia of her beauty and sensuality” (Stremmel and Grosenick 60). She completely and extremely transforms herself in this image wherein she appears dressed in a large, dark colored man’s suit. Moreover, in the painting, it appears that she has just cut off her hair very short, with a pair of scissors still in her hand.

One of the thick tresses of her hair lies over her thigh, and the remaining strands of curls and twists are scattered across the floor and round the legs of the chair.

This clearly demonstrates an act of self-mutilation, by which the subject destroyed and altered a great part of her physical self in an attempt to send a significant message. Frida once said that in her art, what she always depicts “is her reality and not dreams” (qtd. in Herrera and Frida 151). Considering this statement from Frida Kahlo, it is inevitable to assume that this painting talks about her personal life.

This is even more affirmed by the verse of a song painted across the top of the picture, “See if I loved you, it was for your hair, and now that you’re bald I don’t love you anymore” (Smith 50).

The verse was taken from a famous Mexican song at that time (Smith 50). Considering the lyrics of the song, Frida Kahlo seems to be telling that in the beginning, she felt she was being loved for who she is. However, she came into the realization that she was only being loved because of her female attributes, and so out of rebellion perhaps, Frida decided to put these aside and renounce the feminine image demanded of her. Her self-portraits, often with serious physical countenance, especially this one, affirm her statement that “my painting carries with it the message of pain” (qtd. in Rhiel and Suchoff 113).

Apparently, the Self Portrait with Cropped Hair is an image that expresses Frida’s inner emotions, self knowledge, and her sense of individualism. Frida’s self portraits somehow demand attention in gentle and manipulative ways. Since her self-portraits reflect her reality, her paintings become like a diary. Although her self-portraits that reveal something intimate about herself are sometimes shockingly personal, they do not offer a full confession since her aesthetic talents and sensibilities with the embedded symbolisms from color, light, and expression offer a lot of possible interpretations.

Unlike in written art when one reads the printed text, he or she can interpret the writer’s themes and messages according to how he or she understood the words of the author. On the other hand, in paintings, it is important to know the cultural, social, and personal background of the painter in order not to create far deeper misinterpretations. To understand the reality behind Frida’s self-portrait painting, it is crucial to dig into her life more deeply. Frida Kahlo seems to fascinate herself in producing self portraits, since all her life, she created 66 of them.

Her “self-portraits record her birth, her childhood, her marriage to the muralist Diego Rivera, divorce, miscarriage, her sadness over not being able to bear children, and finally the misery of numerous surgical operations that never cured the injuries to her leg and spine from a bus accident that nearly killed her when she was 18” (Rhiel and Suchoff 113). The film “Frida” in 2002 directed by Julie Taymor is “one of the most realistic portrayals of Frida’s life” (Tibol 28).

In the film, her involvement in painting started when she met a trolley accident at the age of 18. The accident leaves and sentences her life with risky operations after her spinal column broke. It made her crippled at a very young age, causing her to suffer terribly. After the trolley accident, her life started to change, and Frida eventually began her life in the artistic world. She met and married her mentor painter Diego Rivera after her bold appreciation of his works. However, his infidelity and unquenchable hunger for sex tortured their marriage.

Hence, her paintings, especially the self-portrait ones, simply express the sequences of her life and the emotions and story behind her loneliness and pain. Frida once said, “I paint self-portraits because I am so often alone and because I am the person I know best” (Rhiel and Suchoff 113). The bitterness of her experiences, especially the bold infidelities of her husband, is perhaps some of the things that she was unable to contain and she had no one to rely on but herself. It was said that “Diego Rivera was a dramatic and stubborn man.

His personality flaws, and Frida Kahlo’s obsession with maintaining his attention despite his rejection,” made her life more miserable (Rhiel and Suchoff 113). Meanwhile, her confinement due to her illness leads to a narrow focus by which she finds herself the most accessible subject. The aloneness of her self-portrait paintings is manifested as she situates herself in an empty room or landscape, detach from her surroundings filled with pain and miseries. Moreover, self-portraits perhaps remind her of her true self that she has known since childhood.

Meanwhile, most of her self-portrait paintings “adopt the staring, sightless look of the person shy before the mirror, self-conscious before the camera, forcing herself into the gaze of the other against her will, not unaware of what is going on around her but not overly responding to it (unwilling to have her response to it recorded)” (Smith 255). The thick eyebrows and penetrating gaze in her portrait suggest that she is eminently social as if she wants to create a relationship between her and the one who will look the piece.

Her mysterious and often serious eyes also allow the readers to discern her independently. In the case of Self Portrait with Cropped Hair, it was apparently the “first self portrait created by Frida Kahlo after her divorce from artist Diego Rivera, an incredibly influential Mexican muralist” (Tibol 26). It was said that Frida’s long hair has been long admired by this man, and the masculine suit depicted in the painting is “most likely his” (. Therefore, people inevitably associate Diego Rivera with this unconventional masterpiece of Frida.

Furthermore, in this piece “Frida gave up the feminine Tehuana costumes so liked by her husband and wore instead a man’s suit, its cut so broad that it might well have stemmed from Rivera’s own wardrobe” (Kettenmann, Kahlo, and Williams 55). This implies that Frida is on the state of rebellion and despair against her husband whom she believes only loves her because of her sensuality and femininity. However, Frida reduced herself to illustration, saying that there is more to her paintings than meets the eye.

Her unconventional self-portrait sends a bold message that she is more than her husband’s fantasy, a space after he retreats from his power in public life. Frida Kahro clearly provides an extremely rare voice for this sphere, by which she tells that her suffering makes her stronger than ever before. Although she might seem to be dominated by her almost obsession to Rivera, in this painting, she clearly tells that she is more than in the confinement of vulnerability and femininity which most men during that time enjoy.

Hence, this particular painting intrinsically has a strong relationship with her former husband. This art gives implies that Frida has great self-assurance despite the pain brought by their separation. Her free expression of self and the sudden transition of her arts’ physical attributes from femininity to masculinity suggest that she is a woman who explores physical and emotional torments through art, by which through boldly expressing herself, she will find great consolation.

The bright colors of the floor perpendicular to the chair mean hope to Frida—that despite her miseries, her self-expression through art still gives her a vibrant hope. Self Portrait with Cropped Hair also gives insights into her emotional state and her new born independence and freedom. Meanwhile, the process on taking on her new bodily condition must have “coincided with an evident radicalization about Mexican society and her extreme belief in communism” (Tibol 24). Her political and radical views made her perceive herself who has and who can gain strength like a man.

Meanwhile, this painting may also be retribution to adversity, especially those who exploit her feminine charms due to her bold expression of sensuality. She might also be challenging her fate to reaffirm her own strengths and hide her physical defects and orthopedic devices through masculine attire. The discarded hair of Frida demonstrates that her feminine charm and her sense of sensuality will still creep and influence unconsciously through the help of her past self-portrait paintings.

The incorporation of earrings may mean that a part of her femininity cannot be taken away from her. Self Portrait with Cropped Hair is also narcissistic since it depicts Frida’s self-absorbed world. The painting is basically a clear expression of herself. Apparently, her self-portrait painting is her most effective way for self-healing in conquering her self-pity due to her physical defects, and in finding companion through art in the midst of her miseries and pain. It talks about her woman’s individuality that she clearly wanted to project.

Her painting is her reality about herself that affirms the initial part of this paper which tells that Self Portrait with Cropped Hair is simply an image that expresses Frida’s inner emotions, self knowledge, and her sense of individualism and unpredictability due to her sudden transition of her portrayal of self. Work Cited Frida. Dir. Julie Taymor. Perfs. Margaret Rose Perencio, Brian Gibson, Mark Amin. Miramax Films, 2002. Herrera, Hayden and Frida Kahlo. Frida Kahlo: The Paintings. New York: HarperCollins 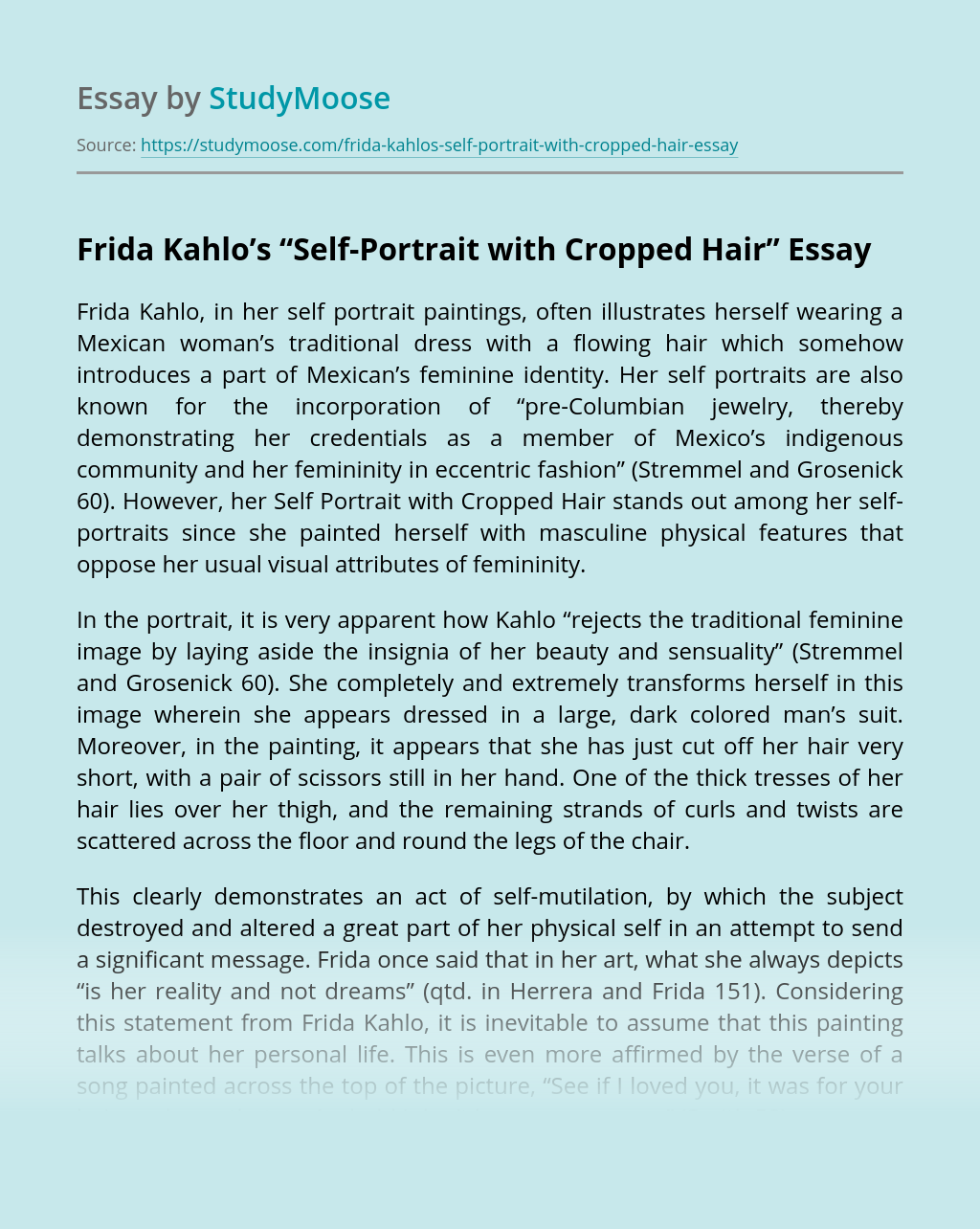