The “Henry Ford Hospital” (The Flying Bed) completed in 1932, created by the artist Frida Kahlo was her first painting on tin. The painting contains all components of “Frida Style” ex-voto (retablo); which is small in size, painted on tin, portrays a tragic event and an inscription. The style used for this painting is Surrealism. This work is made by Oil on Metal. The dimensions of the work are 12 ¼” x 15 ½” In a shape of a Rectangle. Frida used rich colors to express strong feelings.

This artwork was made during the Modern Art period.

Frida Kahlo was the creator of the “Henry Ford Hospital” (The Flying Bed) 1932 painting. This is one of her most painful self-portraits that she had ever painted. Frida created this artwork of herself during one of her most painful times in her life. She was suffering her second miscarriage, and she was also was also realizing that she would not ever be able to carry a pregnancy to term.

She experienced this situation in a foreign city that she did not like, the city of Detroit, Michigan.

They were in the city of Detroit because her husband Diego was creating his famous Detroit Industry frescoes (frescoes, is a technique of mural painting executed upon freshly laid lime plaster) at the Detroit Institute of Arts. In the background of the painting Frida included the Ford family’s factories because they dominated the skyline from the hospitals view. In Henry Ford Hospital Frida lies naked in her bed. Frida has a large tear falls from her left eye.

The sheet beneath her is bloody, because she is had a miscarriage.

Her stomach is still swollen from pregnancy. The bed frame bears the inscription “Henry Ford Hospital Detroit,” but the bed and Frida floats or flies in an abstract space circled by a series of six floating objects around her bed that are symbolic of her emotions at the time of her miscarriage. They are attached with festive bows; the ends of red ribbons I suggest are veins or umbilical chords that she holds against her stomach with her left hand. There is a side view of the female anatomy, a fetus, a snail, a machine, an orchid and an image of a pelvis.

The main object or image is a perfectly formed male fetus; the little Diego Frida had hoped to have. The others refer to aspects of childbearing. The snail Frida explained refers to the slowness of her miscarriage. At the bottom of the painting is the broken pelvis that prevented Frida from having children. The large lavender orchid looks like an extracted uterus, Diego had given it to Frida in the hospital. When she painted the orchid, she had the sexual thing mixed with the sentimental. The female torso is to explain the inside of the female.

The machine at lower left symbolizes the mechanical part of the whole business. This works meaning and the feelings involved are expressed openly. The objects are much larger than her actual body, symbolizing how her fears and tragedies are overtaking her life. The fact that she lies alone in her bed, with no one around her except the sky, shows that she feels alone. This shows the feeling of loneliness, abandonment and helplessness. It also illustrates the fragility of her body and therefore shows that she is in a weak, painful, grieving and depressing point in her life. 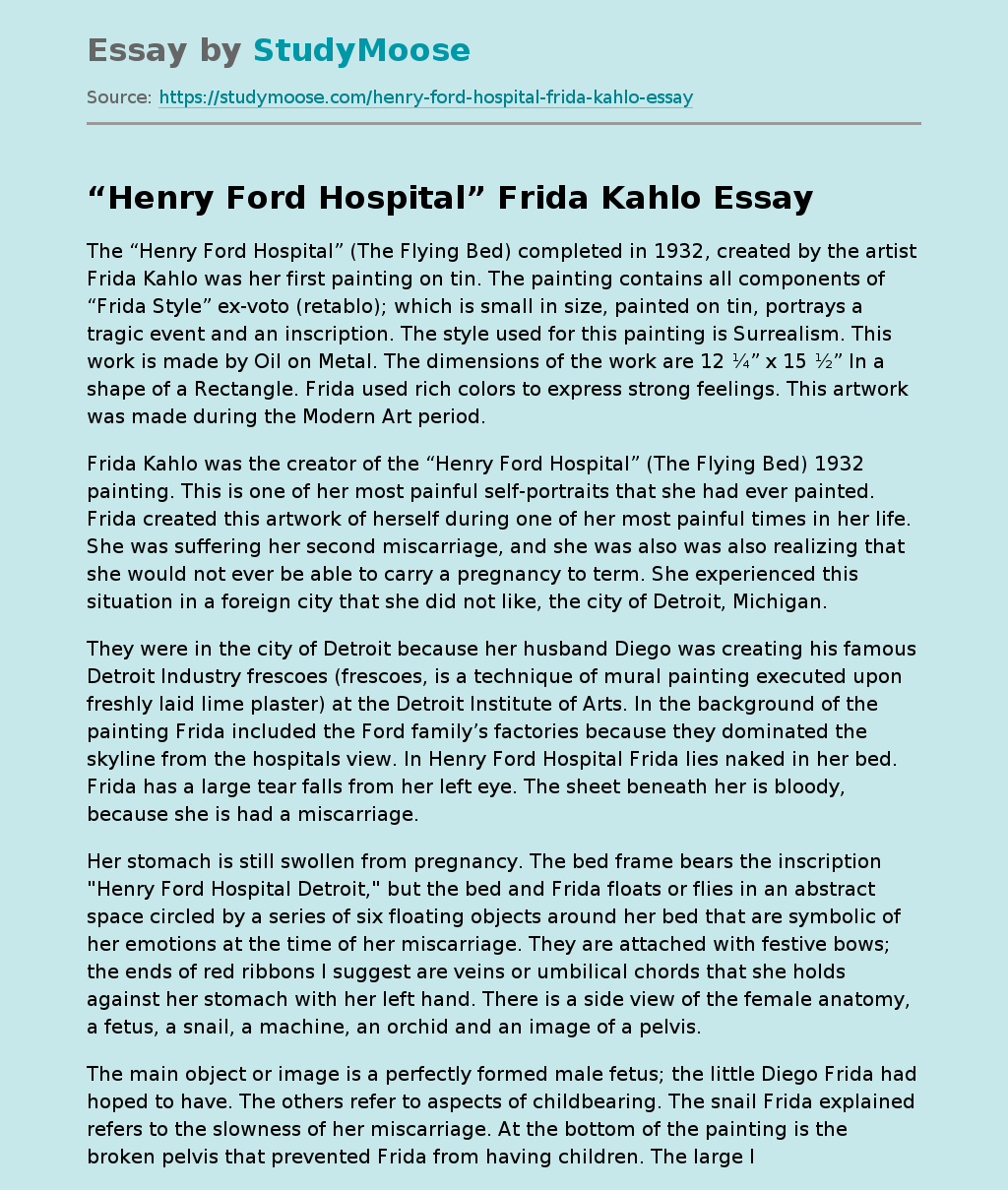