What assumptions did Mr. Fischer make when he prepared the forecasts shown in case Exhibits 1 and 2? Were these assumptions reasonable?

General Assumptions
1.The company has seasonality in sales
This assumption is reasonable as the business has been shown to have different rates of sales in different months.

Assumptions (Income Statement)
1.Sales for the year will be consistent with the previous year (only a small decrease)

This assumption is reasonable since a decline in sales was not predicted until January 1996; only a negligible decline was forecasted.

This assumption is in fact conservative given that the company has been growing consistently throughout the past years.

2.COGS will be consistent with the previous year

Mr. This assumption is not entirely reasonable since Mr. Fischer has estimated a reduction in manufacturing costs of $900,000 however this is not accounted for in the income statement. However this makes the forecast even more conservative.

He assumes the overheads to be 300 throughout the year, which seems to be reasonable as the production is constant during the year.

Furthermore it is close to last years average of 296.

4.Selling and administrative expenses will be maintained at previous levels

. 5.Not showing any interest expense

He is not accounting for interest expense in his pro-forma statement.

This assumption is reasonable as it is predicated that the modernization project will be completed in August. No other investments are expected to be needed.

8.Accounts Payable, he assumes a 30-day payment period for and a consistent rate of $777 per month.

The consistent rate is reasonable since production is steady throughout the year. Given the other assumptions the 30-day payment period is also achievable.

Given that production is constant this assumption is correct to make.

Mr. Fischer made relatively conservative forecasts based on largely reasonable assumptions of seasonality, investment needed for PPE and continuing levels of sales. Based on the data at Mr. Fischer had in June 1995 it is difficult to criticize his projections.

Why does he need additional short term financing to support the additional sales peak? Isn`t he producing throughout the year at a stable rate-I would understand if he needs the money for add. NWC during the low sales period but not during the strong months when the inventory is going down. Why was SureCut Shears unable to repay its bank loan by December 31, 1995 as originally forecasted? SureCut was unable to repay its bank loan for two primary reasons, an overestimating of sales (drop in demand) a build up of capital in inventories (this was in part due to the seasonality of the business).

SureCut has the policy of producing at a constant rate this meant that it has little flexibility to reduce inventories. The downturn caused a reduction in sales therefore SureCut no longer had the revenue from this but still needed to pay for in Raw Materials, Accounts payables, and production related costs. Additionally the investment in PPE went over budget by $304,000 which contributed to the lack of cash. These factors combined led SureCut to taking out more short term financing to cover their immediate cash needs. Inventories increased by 1 Mio as sales go down – capital tied up in the inventory Plant only went up by 100000

Has SureCut’s financial condition worsened sufficiently to cause Mr. Stewart any great concern? The financial condition has been made worse by the downturn, however this can be rectified through adjustments. In addition to this SureCut still maintains a level of current assets ($10,929,000) that far exceed current liabilities ($1,901,000), a current ratio of 5.7, indicating that the in the short term the company is still financially healthy. He should be alarmed but not severely concerned. If however the negative sales trend continue in the future problems might appear. If we take a view where SureCut isfinding it difficult to sell inventory (a long sustained downturn) lets the quick ratio (1.9) tells us there is sufficient liquid capital for the company to survive; cash & cash equivalents: $3.555.000/$1.901.000=1,9

Additionally the current cash management might case problems, as Surecut is paying its suppliers faster than it gets paid by its clients. This does not put Suecut in a preferable situation as there is 15 days difference between payables an receivables. As a result his accounts receivable are very big compared to the monthly sales. These are various methods Mr. Fischer can use to improve his companies long term financial situation (given that the downturn is forecasted to be sustained) 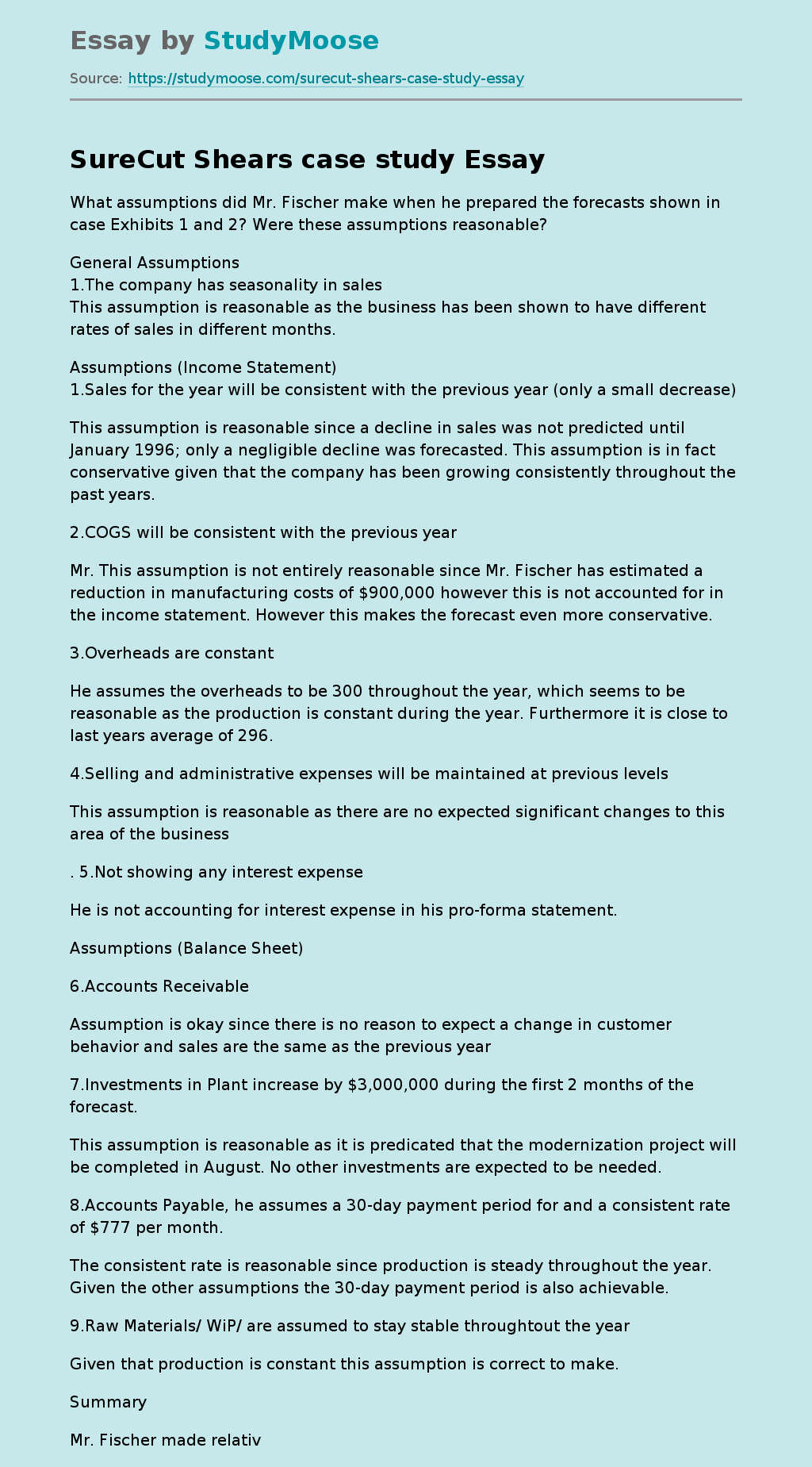