Modern Civilization revolves around Technology and the end goal of Technology is to remove the dirt from under the fingernails of Man and make him cultured. In fact, showing a great bias towards city dwellers, the word “Civilization” itself is derived from the Latin word “Civitas” which denotes the townsman who is more refined than his country dwelling contemporaries. But Modern culture and Civilization is characterized by a distancing from nature.

The tension between the nature and technology (one of the most important basis of Modern culture prevalent in the cities) forms the basis of his celebrated essay “The Metropolis and the Mental Life”.

Don't use plagiarized sources. Get your custom essay on
“ Modern Civilization ”
Get custom paper
NEW! smart matching with writer

At the outset Simmel talks about what man requires in his Life. He says “Man is a creation whose existence is dependent on differences, i. e. his mind is stimulated by the difference between present impressions and those which have preceded”. City life is characterized by concentration of a vast humanity in a limited place.

As Elisabeth Adams explains it in her aptly titled article “Alone in the Crowd: human reactions to urbanization”, “The average resident of a city dwelt in far closer proximity to other people and saw many times more members of his species in one day than his ancestors only a generation or two removed might have seen in a lifetime, and yet the city became known as a world of profoundly impersonal relationships between people.

“This incapacity to react to new stimulations with the required amount of energy constitutes in fact that blase attitude which every child of a large city evinces when compared with the products of the more peaceful and more stable milieu. ”(Simmel 81) Though it can be argued that Simmel might have overly generalized the phenomenon, this has been observed widely enough to be given a pride of place in contemporary literature. In his short story “The Defeat of the City” O Henry speaks almost exclusively about Simmel’s arguments, though in a manner more apt to entertain than readily enlighten.

Robert Walmsley descends upon the city to claim his rightful place in the pantheon of legal luminaries and goes on to become one of the most celebrated members of its high culture societies – full of polished manners and erudite charm. He even marries the most sought after of the high society women – Alicia Van Der Pool. The description of Alicia by O Henry itself seems to justify the vast research that must have prompted Simmel and many sociologists and anthropologists since in to the perils of city dwelling.

To differentiate the natural poise of a farm boy and high society gentleman, O Henry uses one of the most apt descriptions which seem to justify the point about immunity to new stimulations – the blase attitude – formulated by Simmel. O Henry says “He was a lucky man and knew it, even though he were imitating the Spartan boy with an ice-cream freezer beneath his doublet frappeeing the region of his heart. ”(239) O Henry goes on to show the small pleasures of the village with the unique gift that he has to transform mundane things magical.

The city dwelling Alicia is seen to be silent and cool but not haughty. It is left to the imagination of the reader to know the state of Walmsley. Here he was the cool and successful member of the city’s elite sitting in the company of his not so educated Mother making polite conversation with her high society daughter-in-law about marmalade, his sister and even their family dog trying to be part of their evening conversation. It is in this setting the pride of his rural life enters Walmsley’s mind and he gets seized by it.

He, who was anxious al that while about his wife’s reactions to his native rural roots, suddenly stops to care. He knows that the consequences (as the reader can imagine) are going to be grievous. But the joyous and reckless spirit of the village engulfs him – the same spirit which has the capability to react with unadulterated joy to such small pleasures of sight, sound and smell – the same spirit which is lost in the city with all its pretenses and rigid conditions of how things ought to be.

The spirit which gives man the capability of gay abandon and the will to pursue smallest measure of happiness with a desire so robust, that it would be called crass in the highly desensitized city life. As the story goes along, the reader watches with increasing alarm, the loss of reason in Walmsley’s actions. The same reader who carries on with trepidation how Walmsley was going to hide and squirm at the rural crassness of his breed suddenly discovers that it is not his family or folks or anything that goes out of its way to show the tru color of Walmsley’s roots but Walmsley himself.

He calls for manly wrestling bouts with his brother Tom and wins most of them. He challenges the entire farm group. He dances with gay abandon and in Henry’s words “He turned handsprings on the grass that prodded Tom to envious sarcasm. And then, with a whoop, he clattered to the rear and brought back Uncle Ike, a battered colored retainer of the family, with his banjo, and strewed sand on the porch and danced “Chicken in the Bread Tray” and did buck-and-wing wonders for half an hour longer. Incredibly, wild and boisterous things he did.

He sang, he told stories that set all but one shrieking, he played the yokel, the humorous clodhopper; he was mad, mad with the revival of the old life in his blood. ”( O Henry 240) These lines are most descriptive of the difference between city life and the life away from the rigid prescription of city life. As Simmel describes the reasons behind the blase attitude of city life “It has been Money economy which has thus filled the daily life of so many people with weighing, calculating, enumerating and the reduction of qualitative values to quantitative terms” (Simmel 80)

How can you quantify the simple pleasures of spending time joking around with your family and inhaling the sweet scent of earth that you grew up on? This contradiction in Walmsley’s character goes to show that however city life might take over a man, there shall always lie a child inside every man who wants to play simple, seemingly meaningless and inconsequential games which are of no use but have the capability to give immense an purest form of pleasure. As Walmsley reveals his roots and his natural robust nature unmindful of his high society wife, she retreats to her room.

He begins to suddenly fear an encounter with her because he is sure of the nature and intensity of her reaction. “All the polish, the poise, the form that the city had given him had fallen from him like an ill-fitting mantle at the first breath of a country breeze. Dully he awaited the approaching condemnation. ”(O Henry 241) It is but natural for him to expect the heavens to come cascading down on him in reproach. But being true to his brand of “twist in the tale” O Henry, Alicia exclaims that she thought she married a man till she came to the village and found out the truth.

The ending is vintage O Henry “But I find that I have married”–was this Alicia talking? –“something better–a man–Bob, dear, kiss me, won’t you? ” The city was far away. (O Henry 241) O Henry manages to give the shape of a story to all of Simmel’s theories about the cold aloofness of city life, which is so much in marked contrast to the vivaciousness of rural life, lived in close proximity to nature –even if it means living away from the smothering affectation of city and technology. 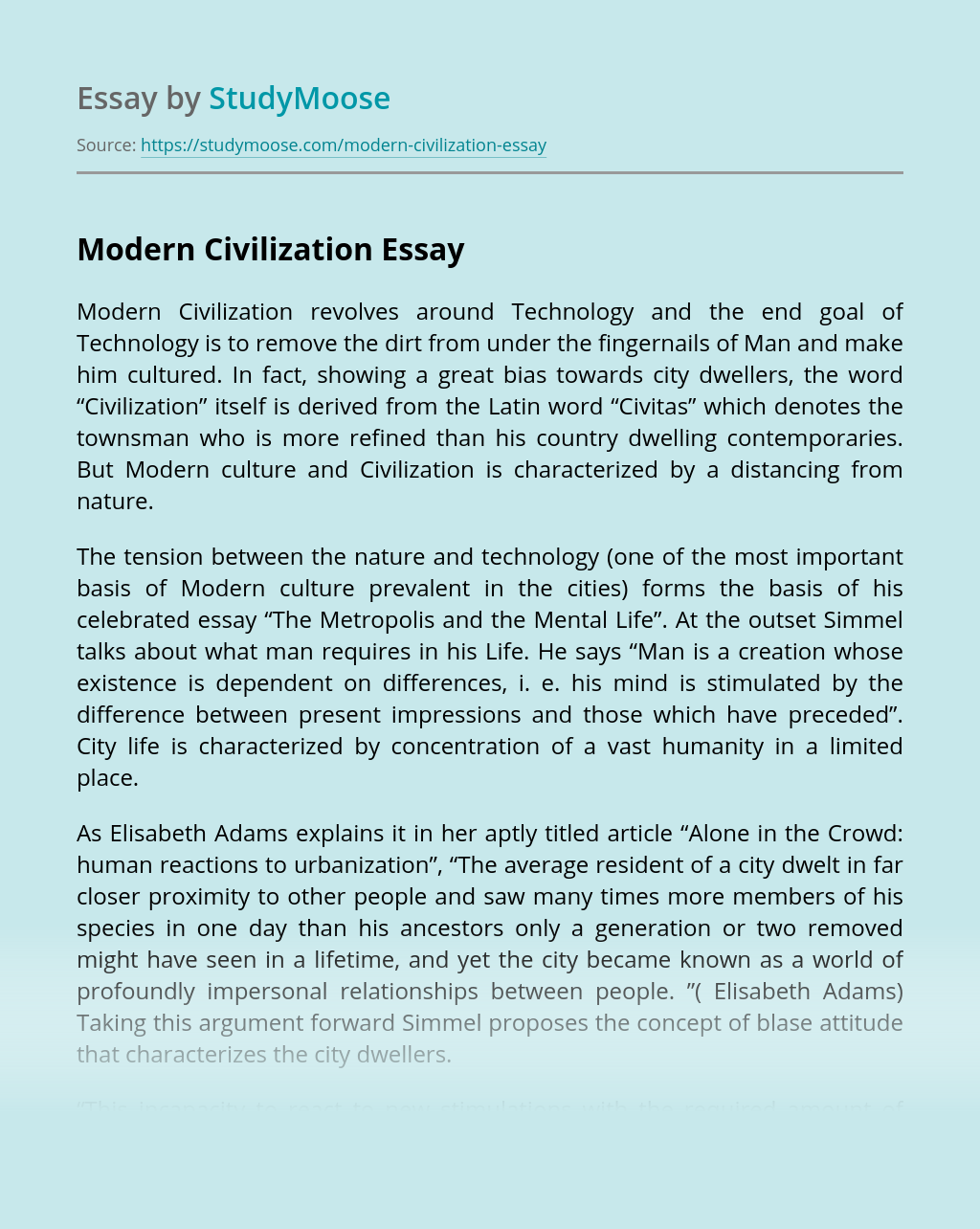