Give me liberty or give me death

As the basic human right, we are all enjoying the inherent freedom since we were born. However, 200 years ago, a group of people was fighting for their freedom perseveringly. On 23rd. March, 1765, Patrick Henry, who is the leading lights of American Revolution, gave the speech in front of Virginian audience. He responded the oppressive against the control of British. he turned colonial ideas against negotiation with England and toward armed rebellion.

Patrick Henry illustrates the themes of freedom in the speech to Virginia convention through the use of the statement that there is no middle ground between freedom and slavery, the experience that how British desecrates their freedom and the emphasis on the importance of freedom.

Don't use plagiarized sources. Get your custom essay on
“ Give me liberty or give me death ”
Get custom paper
NEW! smart matching with writer

The strong desire for freedom is reflected in many parts of his speech. at the beginning of the speech, Henry pointed out that there is no middle ground between freedom and slavery.

“I consider it as nothing less than a question of freedom or slavery…It is only in this way that we can hope to arrive at truth, and fulfil the great responsibility which we hold to God and our country.

“(Henry,88) Henry pointed out that the only way in front of them is either freedom and slavery. There is no doubt that they can not just treat coldly to their own country and their right to get freedom. He also mentions that the act of fighting for freedom is related to the responsibility to God. Later on, Henry looks back on the experience that how British desecrates their freedom.

“And what have we to oppose to them? Shall we try argument? Sir, we have been trying that for the last ten years. Have we anything new to offer upon the subject? Nothing. “(Henry, 89) Henry uses several rhetorical questions on the issues and uses a short answer to response them. It clearly shows that the action that they took before for getting freedom was useless under British’s rude control. Last but not least, Henry emphasis the importance of freedom. “Forbid it, Almighty God! I know not what course others may take; but as for me, give me liberty or give me death! ” Henry ends his speech with this famous quote.

He indicates that he’d rather die for his country than living without freedom. He repeats the importance of freedom and accentuates it in the last sentence. In this whole speech, henry uses there statements to prove his themes of freedom, which are the statement that there is no middle ground between freedom and slavery, the experience that how British desecrates their freedom and the emphasis on the importance of freedom With the process of the speech, Henry’s normal voice becomes louder and louder and almost shouts in the last sentence. And it eventually causes a large number of people to willingly enter the war and fight for their freedom.

Give me liberty or give me death. (2016, Jul 29). Retrieved from https://studymoose.com/give-me-liberty-or-give-me-death-essay 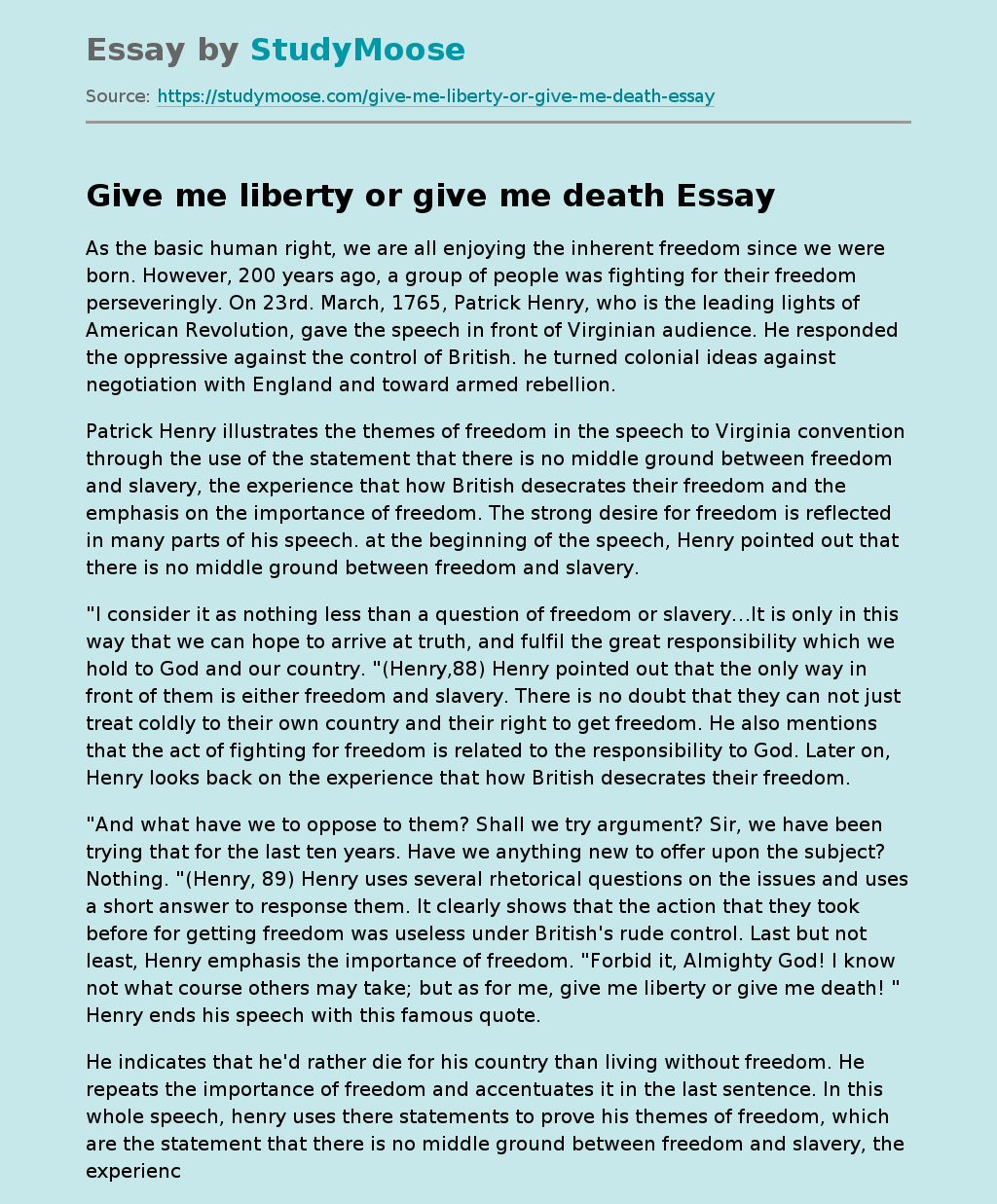