Perfume by Patrick Süskind, exposed me to a series of literary texts, themes and ideas. It also opened me to a variety of cultural developments that happened throughout the book. Through the interactive oral I gained a better understanding of the historical context and Parisian lifestyle. When reading I had superficial knowledge and I never really analyzed the periodical moment that the book was set in. The presentation helped me broaden my understanding of the French lifestyle by explaining the streets of Paris and the lack of sanitation.

Don't use plagiarized sources. Get your custom essay on
“ Symbolism in Patrick Suskind’s Perfume ”
Get custom paper
NEW! smart matching with writer

I now understand the importance of where Grenouille was born and the significance it holds; but then I also found myself astonished of the extreme conditions humans could endure and call everyday life. The fact that the author chose to set the book in that time period, where Paris was at its filthiest, and decided that the main character shall be born with the gift of scent. This fact gave me an interpretation of the author’s choice in location.

It was also through this interactive oral that I got a stronger grasp of the connections between Grenouille and the other gifted abominables that were mentioned in the beginning of the novel. When initially reading the book, I lost the real connections of the characters. It was through the interactive oral that I made the vital connections between Grenouille and Marquis de Sade and the others that were mention as well. These historical figures were also known for their terrible acts against humanity.

As the group described each of them, I was thoroughly interested because I was surprised by some of the horrific things some of them had done.

I was most engrossed by the Marquis de Sade; he’s personality and lifestyle as repulsive as it was, interested me a lot and I realized I got the same reaction from him, as I did from Grenouille. I became aware of Süskind’s directive with such connections. It further strengthens my opinion on how Süskind antagonized Grenouille from the beginning; because of the comparisons to the horrific figures from history. This interactive oral gave me a simple but direct understanding of the cultural context, by explaining 18th century Paris. I appreciate Süskind choice of location and including those historical figures, as foreshadowing. Overall I reached an improved understanding of Perfume. [Word Count: 400]

The Exploration of the elements of innocence from the fallen victims of Grenouille as he begins and ends his quest for the ultimate scent in Perfume: The story of a murder

The roles of minor characters are gravely important to the development of a story. Their character, their actions and what they symbolize lead the protagonist to different points of the beginning or to the conclusion of their journeys. This is clearly shown in Perfume by Patrick Süskind, as the protagonist Jean-Baptiste Grenouille is led on killing spree in search for a certain element for his ultimate scent; the minor characters aid him as the catalyst and conclusion of his quest.

The plum girl of the dark Parisian streets unknowingly awakened Grenouille’s desire for what he perceived to be the ultimate scent. Her role as a minor character was to be the catalyst of Grenouille’s journey, her scent captured him and led him to the discovery that a scent like that was conceivable. She was a fleeting character, barely in the book but her presence and representation brought on the whole premise to Grenouille’s voyage. Süskind never gives the reader a direct characterization of the plum girl but it is through her scent that he creates a personality that the reader is supposed to unravel; when he describes her scent we get an indirect form of characterization of her character “Her sweat smelled as fresh as the sea breeze, the tallow of her hair as sweet as nut oil, her genitals were as fragrant as the bouquet of water lilies, her skin as apricot blossoms… and the harmony of all these components yielded a perfume so rich, so balanced, so magical…” (pg. 41).

Linking her scent to her personality we are obliged to believe she was a girl of adoration, because of the description of her scent. The comparisons of her fragrance are all things that one would find beautiful. “… the scent was not much stronger. It was only purer, and in its augmented purity, it took on an even greater power of attraction. Grenouille walked with no will of his own.” (pg. 40). Everybody admires beauty and it’s through this that Süskind admits that even Grenouille is unable to resist beauty; fore this beauty was in the scent.

Süskind’s diction further allows the reader to entwine the beauty and associate the plum girl with innocence; despite the little context the readers are given. “… like a piece of thin, shimmering silk… and yet again not like silk, but like pastry soaked in honey-sweet milk- and try as he would he couldn’t fit those two together: milk and silk!” (pg. 40). The comparison of her scent with milk brings back Jeanne Bussie’s thoughts of the smells of a baby, the link between their milky scent and their innocence. The author’s choice to link the plum girl with those simple forms of innocence shows how she is one of the representations of purity. The plum girl was the catalyst to Grenouille’s quest as it was through her that he gained the incentive to further his knowledge and vision to capture scent.

During this time, the enlightenment was at its stronghold, as new scientific experiments took place, and as it took on the form of individuality; where man was fighting for their rights. The people of the enlightenment began to drift apart from the social norms of that time and began to associate themselves as their own being. This was something Grenouille soon realized he lacked as he came to terms that he had no essence to call his own. The thing that in his perspective made everyone who they were, was what was absent from him. As Grenouille is led on his journey to capture his intrinsic scent, as he embarks on his killing spree; Süskind leads the reader to believe that Grenouille is seeking a certain element for his perfume. After his first kill every girl that followed next was in one way or another, a form of innocence. From the girl of the rose fields who was “young, so very young”, to the young Italian girls of the migrants, the Sardinian washer-woman, and the carpenter’s daughter; they all shared something apart from their youth. “…the college of medicine examine the bodies of the shorn beauties to determine the state of their virginity.

It was found that they had all remained untouched” (pg.197). All the girls were virgins. Virgins are a universal symbol for purity and innocence, the point that Grenouille was attracted to their scents further incites the feeling that he in fact was trying to extract what they had and that was their sense of purity. It strongly suggests that Grenouille was seeking the element of innocence for his perfume. Süskind shows the reader that Grenouille has an exact plan and process; ones that correspond to the enlightenment. As he journeys we discover different aspects to Grenouille’s nature that resemble aspects of the enlightenment. We see this through his methods and his overall perspective throughout the novel; as the enlightenment was entirely about experimentation, the individual rights of man and finding oneself.

Süskind perhaps proposes that through the quest as he seeks the ingredients for his ultimate perfume Grenouille is also creating a recipe for himself. Grenouille’s whole being responds to the views of the enlightenment as he is searches for self-awareness through science and experimentation. Where the plum girl represents the beginning of his quest, it is only through Laure that he concludes the journey. Her role as a minor character was to be a physical representation of Grenouille’s end goal, to conclude his quest. She was the depiction of the ultimate innocence and it was shown all about her, through her appearance, her age and her scent; “She barely had the rudimentary start of breasts… In a word: the girl was still a child” (pg. 170-171). Süskind clearly illustrates that Laure was a girl of admiration and beauty; this allows us to make the connections of Grenouille’s craving with one associated with himself.

Grenouille’s goal was to be someone that overwhelmed people, someone who could bewitch people; just like he predicted Laure would. She too like the other girls had something that Grenouille wanted, that element of innocence he required for his perfume. As she was the end goal, the others girls were different components to his depiction of innocence, and Laure was the absolute scent. She was his epiphany, and she completed his composition. “In a year or two this scent will be ripened and take on a gravity that no one, man or woman, will be able to escape. People will be overwhelmed, disarmed, helpless before the magic of this girl…” (pg. 171). Only through Laure would he be able to achieve what she could achieve by just being, and only through her and collecting her scent did Grenouille finally come to self-realization, it’s only after he had completed his quest did he come to gather the “worthlessness” to this earth.

He had completed what he wanted and only then did he come to terms that there was nothing else in this world that he would want. He had overwhelmed people, disarmed them, and bewitched them. It simply was not enough. Her character was the physical embodiment for his masterpiece that he would call his scent. The minor characters are the basis structures that aid the main character in any journey he or she sets of to accomplish; they symbolize different aspects of the theme that the book tries to convey.

All the girls were symbols of innocence in one form or another, different ingredients for the ultimate scent. The roles of these girls were to create the hunt for Grenouille, as the plum girl began his quest and Laure brought it to an end. It was only through the quest and these minor characters did he create his recipe for himself and came to self-realization. It was through the quest that Süskind allows the reader to believe that Grenouille was the epic depiction of the enlightenment as a whole. [Word Count: 1316] 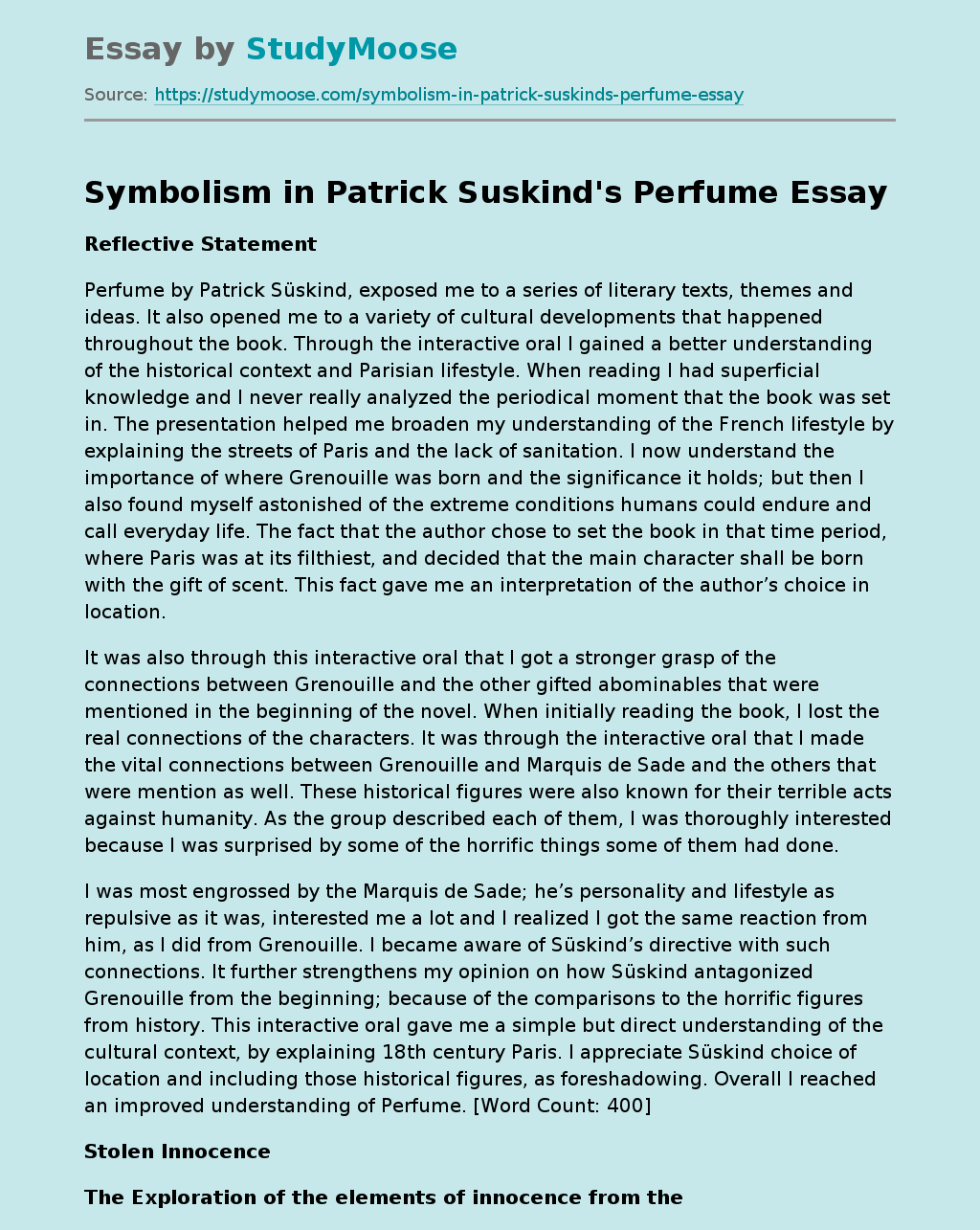