"The Virginia Convention" by Patrick Henry

In the speech “The Virginia Convention” Patrick Henry set out to convince the Virginia delegates that the war with England is inevitable, the longer they wait the harder to win the war and that the war had already started. The author uses repetition, rhetorical questions, and facts to allow the speech to be more effective, interesting, and strong.

Repetition is one of the stronger designs that Patrick uses to help stress the importance of taking on this battle now rather than waiting and being to late to defend what is theirs.

Turn in your highest-quality paper
Get a qualified writer to help you with
“ “The Virginia Convention” by Patrick Henry ”
Get high-quality paper
NEW! AI matching with writers

To begin with, Patrick made certain points by repeating the words he spoke as often as possible and using them in his speech as much as possible to emphasize. In speaking of living under the oppressing rules of the king, who lived so far away and had never even seen this land, Patrick, no longer willing to tolerate the king’s preposterous laws, states, “We must fight! I repeat; sir we must fight!” Next, referring to several unsuccessful attempts to enlighten the king about the need for freedom from his tyrannizes rules, Patrick declares, “We have petitioned.

We have remonstrated. We have supplicated.” Patrick Henry uses the strategy of repetition to enforce the need to join the war and declare freedom from Britain.

Using resent events and facts as a technique to emphasize the need, the urgency, and the importance of joining the war, Patrick Henry stresses “Our brethren are already in the field.” Patrick approached the people with a statement about England’s offensive thoughts of the people in America, “They tell us sir that we are weak-unable to cope with so formidable and adversary.

” With feeling in his voice Patrick accents, “The war has actually begun.” Patrick Henry’s facts showed the people just what was out there in the war and the strife between America and England. It was time for people to stand up and fight for freedom and Patrick wanted the people to be a part of that fight.

Henry uses the strategy of rhetorical questions to make the people realize how irrational they are being for not entering this war, with the rest of the land, against Britain. “Is this part of wise men, engaged in a great and arduous struggle for liberty?” Henry asks, wanting to know why they want to just sit back and take the oppressing kings rules; how long until they become just like the king and the people of Britain? How long until they become the slaves of the new world, taking orders from a king and a country that is thousands of miles away? How long until they are weak and powerless and unable to fight for freedom that they have wanted for so long. “Is life so dear, or peace so sweet, as to be purchased at the price of chains and slavery?” Henry uses these questions to find only one answer, going to war with Britain and standing up to the king for what they have worked so hard to develop and make their own.

Henry uses true and powerful statements, rhetorical questions, and repetition to get the point across to the person that going into the war is the only choice if they want to turn this land into a country of their own. The people cannot just live their lives pretending not to hear and see what is going on outside of their small community and not take any action to what will be the destiny of not just the people around them but them as well. They must stand up with their neighbors, cousins, and “brethren” and fight for what they believe, what they want, and what they have dreamed of for so long. Henry makes the point that the “war has already begun” and there is nothing they can do but ignore it or join it; what do they want, liberty, peace, justice for what they have worked so hard all of their lives? All Patrick Henry wants is liberty and he will die fighting for it, “Give me liberty or give me death!”

"The Virginia Convention" by Patrick Henry. (2016, Jun 18). Retrieved from http://studymoose.com/the-virginia-convention-by-patrick-henry-essay 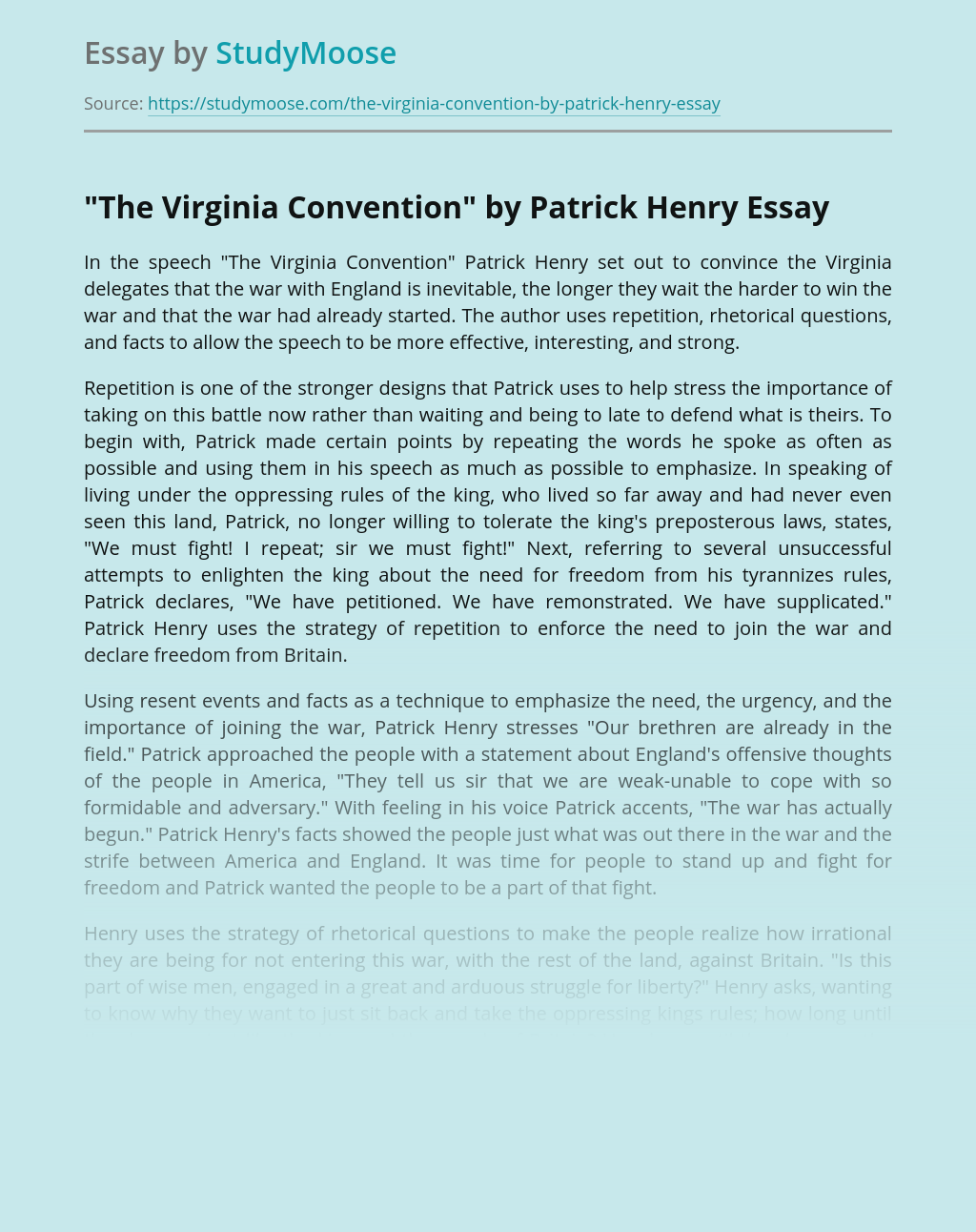 Turn in your highest-quality paper
Get a qualified writer to help you with
“ “The Virginia Convention” by Patrick Henry ”
Get high-quality paper
Helping students since 2015
Stay Safe, Stay Original