Libraries, bookstores, and even school classrooms are swamped with many explanations of the Holocaust. So many survivors have a story to tell, so many people have a point to make, and so many more people simply want to try to understand the horror, or maybe help others to understand it better. Elie Wiesel’s Night and Art Spiegelman’s Maus are two greatly admired works of art which are flooded with the shocking dreadful summary of the Holocaust works. During the tenth grade one of my favorite books was Maus.

Don't use plagiarized sources. Get your custom essay on
“ Night VS. Maus ”
Get custom paper
NEW! smart matching with writer

Another one of my beloved stories was Night. Although they are very different, they also have similarities.

Art Speilgman’s Maus is a comic book and it tells the tale of Vladek, Art’s father. Vladek and his wife Mala are survivors of the terrible tragedy known as the Holocaust. Throughout the story, it tells all about Vladek going through life’s trials and tribulations. There are even parts of Vladek’s story that he doesn’t want Art to tell.

I personally believe Art wasn’t wrong for telling them anyway because why would he tell some of the story but not all? I think skipping parts would mess up the flow of the story. On pages 85 and 86 of Maus is the “Hanging scene.” This is a very important scene because both books have a hanging scene. In Maus, Anja’s father comes into the room with a horrific look on his face and says “They just arrested my friend, Nahum Colon, and his son.

” In Maus, you see how the emotions in the words. In Night, it is much darker and cruel because you feel worried when you read it. You have to imagine what the expression on each person’s facial expression is.

Maus’s hanging scene embraces the reader to understand better and show how serious the Holocaust really was in my opinion because in Night only the people who know of the hanging are the people at the concentration camp, where in Maus everyone in the street knows. Though both books have lots of similarities, there are also many differences. Maus is a graphic, “comic book” novel while Night is a regular book. Even though both story tellers were at the same place, they were treated differently. The survivor in Maus had used skills like using a different language and disguising himself. Vladek could speak Polish, English, and German. He also used his skills he picked up from working elsewhere to mend shoes. While in Night Eli was only a child at the time and he was trying to do basic work and keep his father going. Elie was manipulated easily by other Jews. The other Jews would tell him to just abandoned his father and fend for himself and he began to think that he should do it. Elie also didn’t have any plugs or connections to ensure his safety or to get a good job but, sometimes he did get lucky.

Another contradictory feature that differs is the relationship between Art and Vladek in Maus, and Elie and his father in Night. Vladek always seemed to need Art around to stay with him and help him to deal with his health issues, but Art didn’t hastate in say no. Art was married and wanted to embrace his relationship with his wife more than he did with his father because Vladek was self-centered and did what he wanted to do at all time. He loved being there for his father, but didn’t want to deal with his ways. Unlike that with his father, Elie always took it upon his to be there for his father through everything. Elie’s father meant the world to him and when things was wrong Elie blamed himself for not doing more than enough to keep his father up and in shape to stay up with him. The relationships between Elie and his father were a lot closer than Vladek and Art because Elie’s father was all he had left, so he didn’t want to risk losing all that he had. 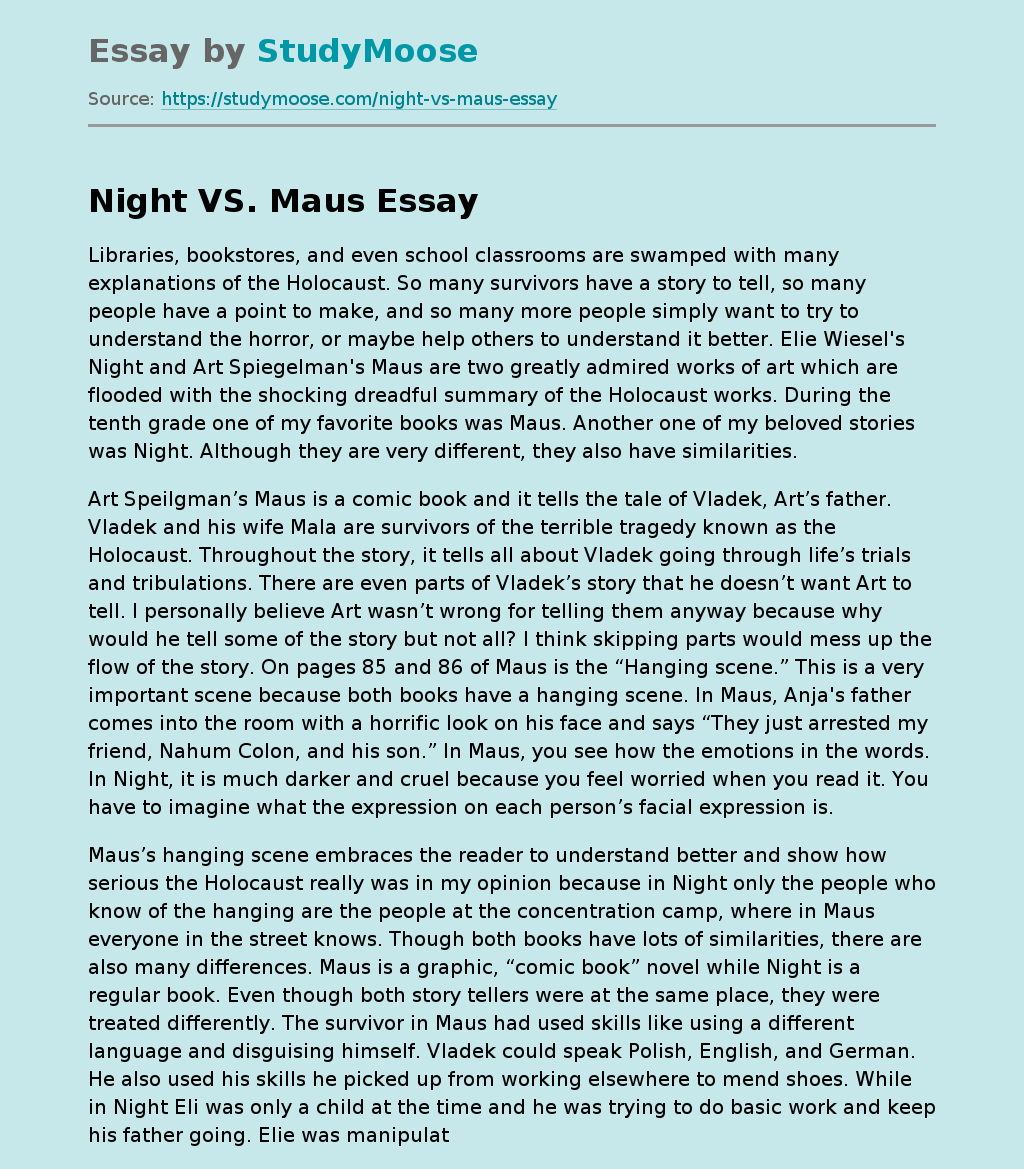