The autobiography Angela’s Ashes by Frank McCourt tells the life of the McCourt family while living in poverty in Limerick, Ireland during the 1930’s and 1940’s. Frank McCourt relates his difficult childhood to the reader up until the time he leaves for America at the age of nineteen. Angela’s Ashes has many prevailing themes, but one of the most notable is the settings relationship to the family. The setting of the book ultimately influences the choices and lifestyle of the McCourt family in many ways.

Don't use plagiarized sources. Get your custom essay on
“ Personal Experience of Frank McCourt in Angela’s Ashes ”
Get custom paper
NEW! smart matching with writer

Living in poverty and not being able to meet basic needs leads the characters to result to desperate measures, such incidents as stopping Frank McCourt’s education and taking a job to support the family. Frank is forced to take the job mostly because his father is an alcoholic and uses all the money to buy beer instead of feeding his family. Frank describes this pattern of drinking away the money by saying ” when dad comes home with the drink smell there is no money and Mom screams at him till the twins cry”(42).

This situation lasts until Mr.McCourt leaves to work in England and is never heard from again which forces Frank to take a job at fourteen years old. Frank takes on the role of the head of the family proudly and comments ” Its hard to sleep when you know the next day you’re fourteen and starting your first job as a man”(309). Frank’s ability to provide financial stability leads to greater comfort and living conditions for his family.

The members of the McCourt family are also forced to beg and steal in order to help the family’s well being. Mrs.McCourt begs charities especially the St.Vincent de Paul Society for help with basic necessities for the family such as food, clothing, and furniture. Mrs.McCourt is even forced to beg for the family’s Christmas dinner. The butcher who she begs to tells her ” What you can now missus, Is black pudding and tripe or a sheep’s head or a pig’s head”(97). Mrs.McCourt reluctantly accepted the pig’s head and is ridiculed walking home with it. Also, the children are forced to pick up scraps of coal for the fire from the road on Christmas Day. Frank describes the children’s humiliation by saying, ” Even the poorest of the poor don’t go out Christmas Day picking coal off the road”(99).

Despite Frank McCourt’s horrid poverty, tiresome starvation and devastating losses, Angela’s Ashes is not a tragic memoir. It is in fact up lifting, funny and at times triumphant.

“When I look back on my childhood I wonder how I managed to survive at all. It was, of course, a miserable child hood: the happy childhood is hardly worth your while. Worse than the ordinary miserable childhood Is the miserable Irish childhood, and worse yet is the miserable Irish Catholic childhood”, writes Frank McCourt of his early life Although Frank McCourt’s autobiography, Angela’s Ashes, paints a picture of both terrible poverty and struggles, this text is appealing and up lifting because of its focus on both humor and hope. McCourt’s text shows the determination people living in dreadful conditions must have in order to rise above their situations and make better lives for themselves and their families. The effect of the story, although often distressing and sad, is not depressing. Frank as the young narrator describes his life events without bitterness, anger, or blame. Poverty and hardship are treated simply as if they are a fact of life, and in spite of the hard circumstances, many episodes during the novel are hilarious.

Frank McCourt was born in Brooklyn in 1930, just after the beginning of the Great Depression. During this time, millions of people around the world were unemployed and struggling to survive. Franks father, Malachy McCourt, struggled to obtain work and lost it easily due to his alcoholism. His mother, Angela McCourt, being a good catholic wife produced five babies in four years, leaving her unable to provide the most basic care for her children. When the baby, Margaret, died due to the shocking living conditions in Brooklyn, Angela subsided into clinical depression, which went untreated. Other women in the building where the McCourt’s lived looked after the children until Angela’s cousins arranged for the family to return to Ireland.

Life in Limerick was considerably poorer, with a less supportive population than Brooklyn. The McCourt’s lived in a succession of substandard flats and houses characterized by poor sanitation and lack of electricity. The family had so little furniture that they shared beds, with no sheets or blankets. When Malachy McCourt took his family back to an impoverished Ireland he chose to live in the south, where he was discriminated against because of his northern name and accent. He was unable to find work and when he finally did it was too late. He had become an alcoholic, unable to control his drinking and conform to the demands of a job. This meant that his family was reduced to existence on the dole and as a result, his children starved, and were forced to pick coal up from the side of the road in order to keep the fire burning. When Malachy left for work in England he sent no money home and Angela was forced to beg for food. In these terrible situations two more of her children died, Angela was hospitalized with a miscarriage and pneumonia, while Frank was hospitalized with typhoid fever and conjunctivitis. Survival for the family was clearly difficult and life only improved when Frank found full time employment as a telegram boy. His sense of responsibility guided him to give his mother his wages in order to support the family.

Life in Limerick was often associated with humor. A lot of laughter derived from religious practices such as taking the wafer at mass. Since the wafer regularly stuck to peoples tongues, the boys at school had to practice sucking pieces of newspaper, sticking their tongues out for the teachers. The sins that the children confessed were also often sources of humor for the priests, and when grandma’s demand to know if she should clean Franks vomit up with Holy Water is pure mockery. “bless me father for I have sinned, its been a minute since my last confession”, becomes a sarcastic comment on Grandma’s ignorance. Poverty itself reduced the family to other slapstick situations. Pious Grandma’s deliberate lie to the real estate agent when she denied that there had ever been two rooms upstairs in Angela’s house has a savage humor in light of her piety. For the children Grandma was often the source of unintentional humor from the moment they heard her accent.

There is humor in the situations caused by Roman Catholic censorship. On one occasion Frank is evicted from the public library for reading a book about sex left on the table. The irony here is he really wanted to read Butlers Life of the Saints but was enticed by a book that shocked the librarian.

From an early age Frank promised to support his family. To do this he dreamed of returning to America. During the novel there was discussion between Frank and his father about the difference in economies of the two countries when his father discussed this over the paper he encouraged him to get a good job in the land of opportunity. These discussions were placed in the context of the English oppression of Ireland. It is the symbols associated with New York that really sustained Franks dream over the years. The images of the Statue of Liberty and Ellis Island which he kept as he left New York as a small boy were so clear that he recognized them on his trip back.

McCourt’s hope of a better future was shared by his father, brother Malachy and hisUncle Pa Sheehan. However, it was Frank that had the determination to work at any job available and to save money even id his family starved, in order to make the dream real. There is no magic in Angela’s Ashes. Poverty and despair are cured by both hard work and breaking the law. Not everything that Frank did to save his fare was honorable, but his choices were made with long term goals in mind.

Angela’s Ashes depicts unrelenting poverty and the terrible consequences for individuals living in dirtiness. However, Frank McCourt shows that there is always humor in life, no matter how desperate the situation is. Combined with this is the hope that sustained McCourt and drove him to seek a better life in the USA. 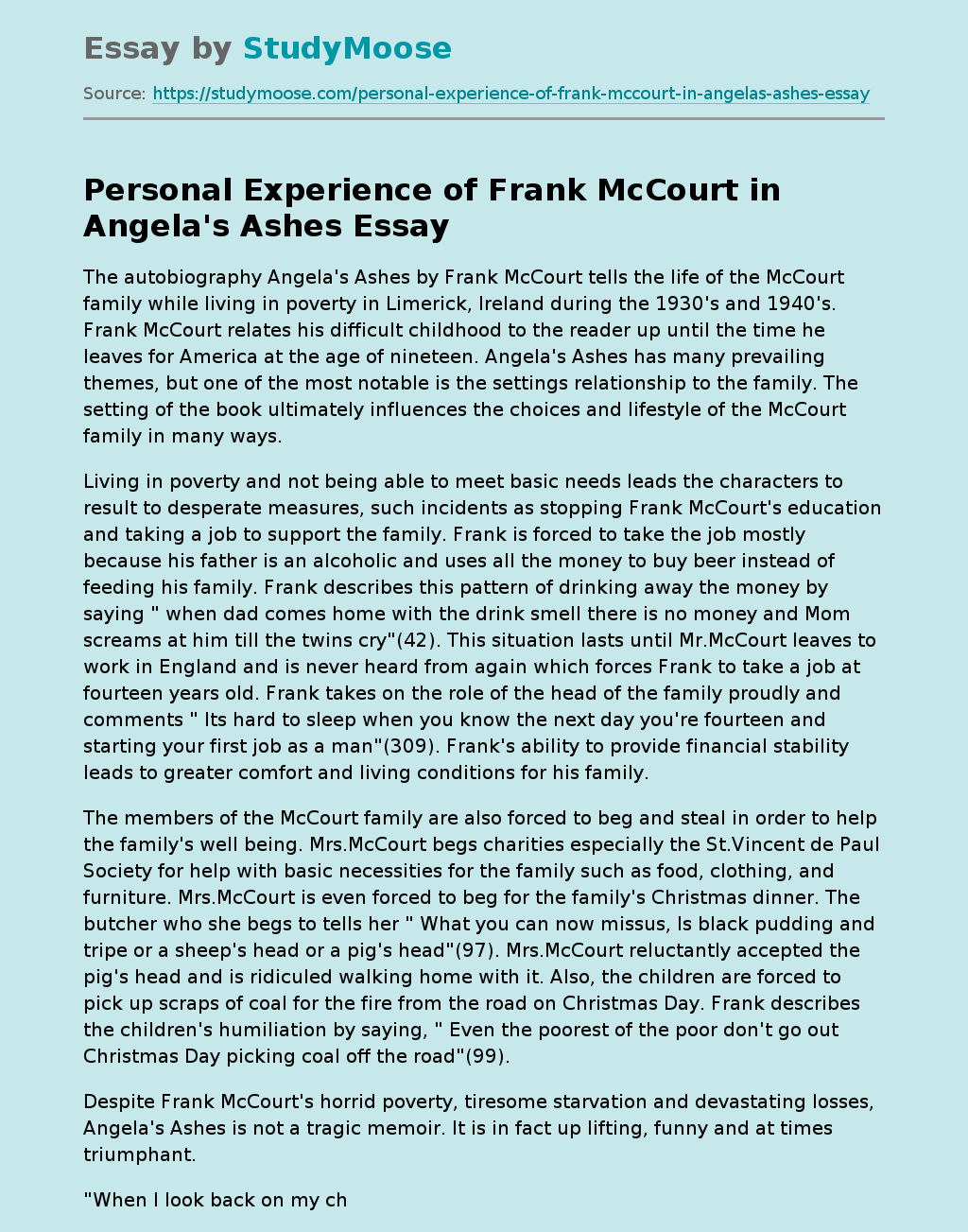