"Ashes for the Wind" by Hernando Tellez

In the short story “Ashes for the Wind”, Hernando Tellez uses Juan Martinez to show that sometimes you have to make sacrifices in order to fight corruption and injustice. Through Juan, his wife Carmen and their baby, the author tries to show that people should not be pushed around and intimidated, which is why I think that Juan is a hero. To me being a hero can mean many things, wether it is to inspire, help or even take a stand and a first step towards something better and good; a hero is a hero and that’s who Juan is.

Don't use plagiarized sources.
Get Your Custom Essay on “Ashes for the Wind” by Hernando Tellez Just from $13,9/Page

He stood up to the authorities, even though at the time he may not have know or realized this, by sacrificing his life and his family’s, he sends a message and makes a point. Juan represents freedom, innocence and shows the corruption in the government.

Freedom to vote for what you want and not what you are forced to; freedom to other farmers and people to make their own choices and not be thrown out, pushed away and punished because of corruption or their votes.

Innocence, in the fact that Juan and his family died an innocent death that was not deserved just because Juan voted for what he wanted and when the person who won turned out to be someone else they ordered his death under the suspicion that he was a resistor. These two things help to show the people that there is corruption in their government and that people aren’t being treated equally and fair, that someone has to do something about it and Juan took the first stand. He was a leader, a hero and for all we know could have been the reason for people to start a revolution, that eventually set things right again and saved lives of many people. It shows that through each action, not matter how big or small, we make our future.

“Ashes for the Wind” by Hernando Tellez. (2016, Apr 02). Retrieved from https://studymoose.com/ashes-for-the-wind-essay 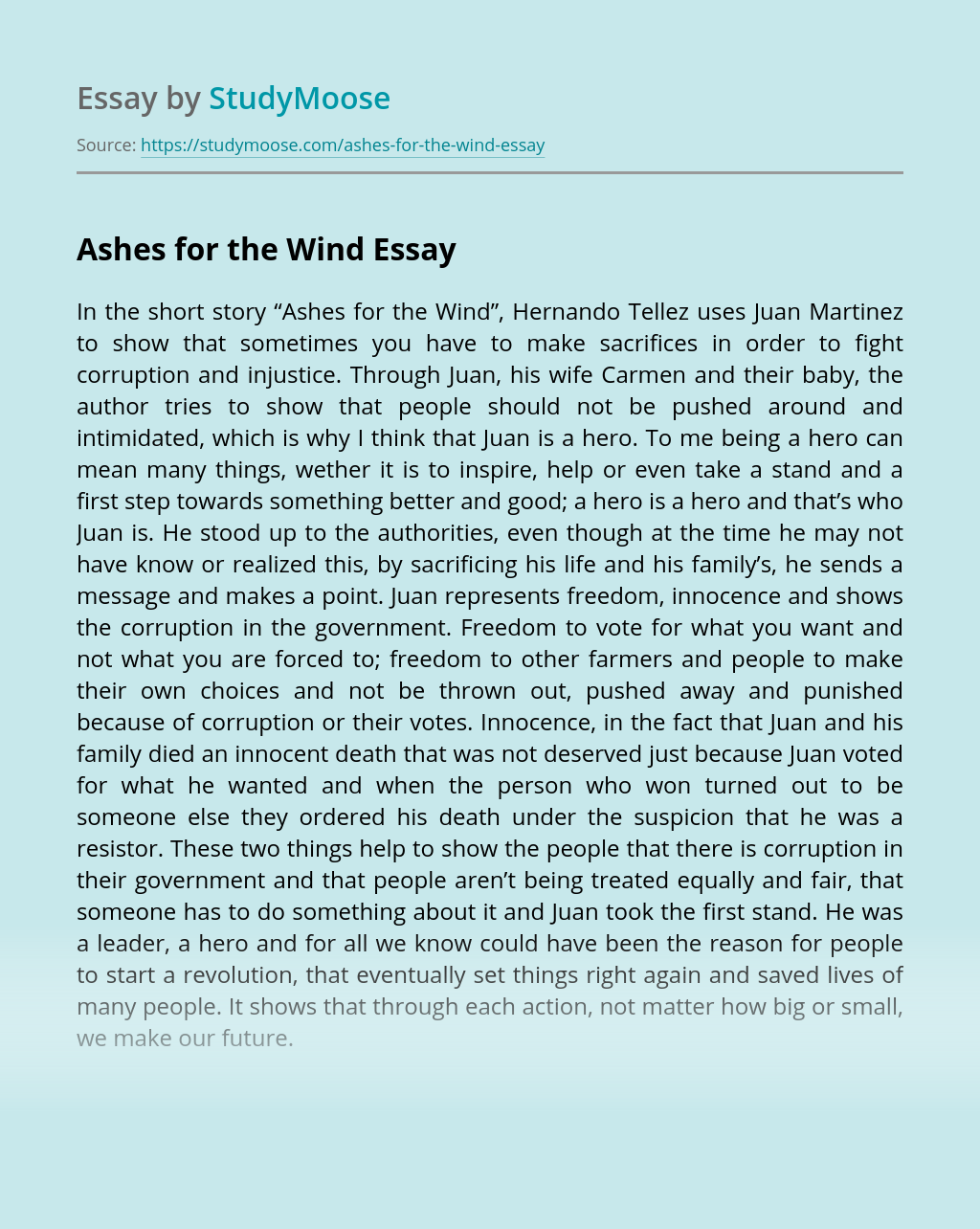 Rate this post The American Psychological Association states that, “Teen suicide is a growing health concern. It is the 3rd-leading cause of death for young people ages 15 to 24” (Teen Suicide is Preventable). As youth suicides are becoming more publicized, society is gradually becoming more aware of this global concern. Although most people do...

How much is John Proctor responsible for his own death

Rate this post “The Crucible” is set in 1692, in Salem, Massachusetts. It is written by Arthur Millar in the early 50’s. It follows the lives of a gang of teenage girls, meddling with witchcraft. Stifled by the crushing pity of their elders they end up doing strange things in the woods. The chief of...

Rate this post Within The Lotos Eaters and Choric Song, Tennyson portrays a life complimentary from toil, where the mariners remain in a consistent dream-like state. The mariners resolve to stop wandering the seas, and settle in the tranquil, carefree world. Contrastingly, Ulysses wishes to continue exploring the world and wishes for more adventure. Ulysses...

When I Have Fears and Mezzo Cammin

Rate this post As people near the time of their deaths, they begin to reflect upon the history and events of their own lives. Both John Keats’ “When I have Fears” and Henry Longfellow’s “Mezzo Cammin” reflect upon the speakers’ fears and thoughts of death. However, the conclusions between these two poems end quite differently....