Sacrifice is one of the purest and most selfless ways to love someone. There is no better way to show one’s loyalty or love for another than through sacrifice. The Kite Runner clearly demonstrates the sacrifices individuals made to make the ones they love happy.

In Khaled Hosseini’s novel The Kite Runner, a little boy named Hassan demonstrates love and sacrifice the most. Hassan admires Amir an immense amount and his loyalty towards Amir is always present in everything he does.

Don't use plagiarized sources.
Get Your Custom Essay on Love and Sacrifice Just from $13,9/Page

He constantly sacrifices things for Amir and does whatever he can to make Amir happy and Amir’s father Baba, very proud of Amir. Hassan makes sure Amir is always pleased and does anything and everything Amir tells him to do. Hassan has an unconditional love and loyalty towards Amir that he does not falter no matter how badly Amir treats him. Hassan is absolutely selfless; to a point where he sacrifices himself for the one thing he knows Amir has craved his whole life, his father’s admiration.

When Hassan goes running for the blue kite, Amir asks him to come back with it and Hassan replies “ For you a thousand times over!” (pg.71). Hassan has two choices; to give the blue kite, which will consequently betray his best friend Amir, or to be punished by Assef and his friends and keep the kite. His devoted love to Amir results in a horrible sacrifice. Hassan gets raped and does not even think twice about giving up the blue kite, the key to Baba’s heart. He stays loyal to Amir even though he pays a hard price.

Hassan has always taken the blame for things Amir does or farthings Amir makes Hassan do. Hassan being the selfless person he is never speaks up for himself knowing that will only get his dear friend Amir in trouble. Hassan’s final sacrifice for Amir is deliberately planned by Amir himself. Amir cannot withstand the pain and guilt of knowing that he does nothing to help Hassan from getting raped; he is selfish and a coward. He is reminded of this every time he looks at Hassan. He thinks if he can find a way to make Hassan and his father the servants of their house, Ali will then leave and rid him of his guilt and suffering. So he plants his new watch under Hassan’s bed and then accuses Hassan of stealing it. Knowing that Hassan will never disappoint him. He waits for Hassan to respond when Baba asks him if this is true. “Did you steal that money? Did you steal Amir’s watch, Hassan?” Hassan lies … “yes” (pg.111) this is another significant event where Hassan put Amir before himself selflessly.

Baba Is always perceived as a wise man with strong morals and opinions in “The Kite Runner”. He is not a coward nor selfish, he stands up for what he believes is right and Baba is a very brave man. This is displayed when he sacrifices his life for a woman he does not know. He stands up and says, “Tell him I’ll take a thousand of his bullets before I let this indecency take place”. (Pg. 122) This act stops a Russian soldier from raping a woman that is carrying a baby on their way to America. This shows the love Baba has in his heart to help this woman from a terrible event that would have taken place if he had not stopped it. He has shown love and sacrifice for women he does not know and that shows his good character and bravery.

Although Amir had feels his father never appreciated him enough his father makes a big sacrifice for Amir. With the war-taking place in Afghanistan, Baba knows it will not be a safe place for Amir to grow up and knows he has to do something about it. He leaves everything he has behind. He sacrifices everything he has for Amir, all his belongings, and his house, and where he grew up. He leaves his life behind so Amir can have a happy and safe life in America. He does not like America but he knows it is best for Amir. He puts Amir before himself, demonstrating another one of Baba’s selfless acts.

Throughout the novel, Amir has some very negative personality traits. He is selfish, demanding, cowardly, disrespectful and jealous. He does not seem like the type of person that will do something for another out of the kindness of their heart. He always thinks about himself and what he wants. He has never sacrificed anything for the people he loves. Growing up with the memory of Hassan’s rape still fresh in his mind like a situation that has just unfolded has finally opened his eyes and makes him realize he needs to be brave for once in his life. So Amir acts. He goes back to Afghanistan to find Hassan’s son, Sohrab. Rahim Khan’s advice, “There is a way to be good again” (pg.2) helps Amir to put his feelings into action. Assef, now a Taliban officer, beats Amir up badly, but this, heals Amir of his wrong doings from the past and he takes Sohrab back to America with him to live a good life. Amir finally puts someone before himself after all the sacrifices Hassan has made for him in the past. This shows the love and sacrifice he makes for Hassan’s child knowing it is the only way he can ever repay Hassan for the years of mistreatment in their childhood.

The Kite Runner by Khaled Hosseini demonstrates a very good lesson on sacrifice and love. The novel is a perfect example of the ways Jesus shows us how to live our lives. “There is no greater love than to lay ones life down for a friend”. 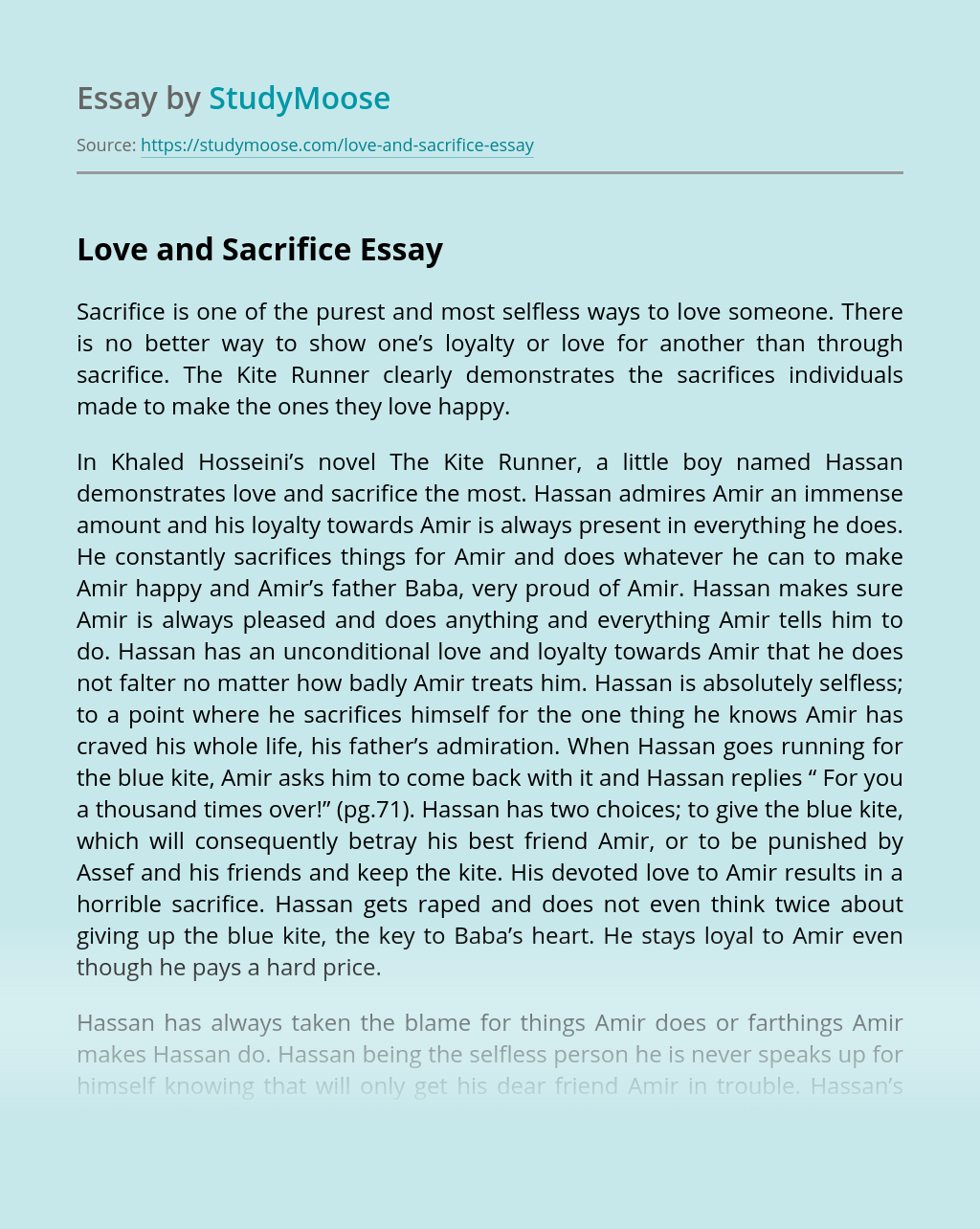 Class conflict is represented throughout the play, A Streetcar Named Desire in various ways through characters, symbols, ideas and language. Characters such as Blanche, Stella, Mitch and Stanley are used throughout the text to represent the upper and lower classes, as well as the conflict between the two classes. Symbols, ideas and language help to...

Siddhartha, by Hermann Hesse aligns perfectly with the genre of a bildungsroman. Why? Because Siddhartha grows as a person from youth to adulthood throughout the story. He leaves his home looking for answers and experience trying to achieve Nirvana. Siddhartha’s unhappiness makes him leave on a journey looking for enlightenment. In a bildungsroman, the goal...

View sample
Get Essay
The Body by Stephen King

In the novella The Body, author Stephen King makes an attempt to describe a story about losing innocence, just to be replaced by maturity and the corruption that includes it. To do so, King revolves a story around a group of four kids who go on a life changing journey to discover a dead body...

View sample
The Theme Of Evil In Shakespeare's Othello

Just what is “wicked” in Shakespeare’s play? Iagos will for “vengeance” on Cassio, who has been promoted to a greater army rank than himself? Is Iago evil? Essentially, Iago might be described as the central trouble-making, ill-willed character of the play; he leads a great deal of the characters into a state of confusion, convincing...

Abraham Lincoln, the 16th President of the United States of America, summed up the perfects that would go on to shape one of the most powerful countries of the world. Although President Lincoln’s speech was about ten lines, in which he delivered in two minutes, he moved not simply the people who had collected for...