The movie “3 Idiots” is an Indian film about the life of three engineering students who went to study at one of the best colleges in India, the Imperial College of Engineering. Coming from different walks of life, the three “idiots”, Farhan Qureshi, Raju Rastogi , and Rancchoddas “Rancho” Shyamaldas Chanchad, will become best of friends. But the movie will circle on how the wisdom and ideals of Rancho will influence the life of his two friends and other characters in the story.

At first, Rancho’s giftedness seemed entertaining to his friends and classmates. But his free spirit and wit will irritate his lecturers including the college director, Professor Viru Sahastrabudhhe (ViruS). Standing by their new beliefs as inspired by Rancho, the three friends will face obstacles that will test their loyalty and determination. Valuable lessons can be learned from the characters portrayed in this film, even from the antagonists.

The movie all throughout illustrated how the elder people of India (in the story) make themselves prisoner to the expectations and high regard of others.

They pass on this burden to their children who had to sacrifice their passions, happiness, and future. The movie also seemed to point out how important open and honest communication is within the family. Communication is so important that failing to be understood or to understand may lead to serious heartbreaks and depression among family members. I have also observed that verbal wit is entertaining. But in the long run, our actions are what will win the respect and the hearts of people.

Farhan Qureshi is studying engineering to pursue his father’s wishes. But his one real passion though is wildlife photography. As said by his father to Rancho during a confrontation, they have invested all their money in Farhan’s studies. They didn’t buy a car or an extra air conditioner (only Farhan’s room had AC) because they prioritized Farhan’s study needs. Coming from a struggling middle class family, Farhan is pressured to finish engineering to compensate the sacrifice of his family. But in the course of the story, Farhan adopts the outlook of Rancho to pursue one’s true passion.

He gathers the courage to take a stand and convinces his father to believe in his dream of becoming a photographer. Farhan demonstrates the lesson of courage to believe in your passion and follow your happiness, and not just to live for the approval of others, as seen in the words of his father when they argued over his career change, “The world will laugh. They will say that you reached the final year and quit.” But in the end of their quarrel, the final response of Farhan’s father demonstrated and taught us humility, open-mindedness, the willingness to understand, and the untiring love of a parent. Raju Rastogi comes from a poor family. Raju’s father is a retired post master who had become a paralytic. His mother is a retired school teacher. Most of their income went to his father’s medication.

The scene in Raju’s house depicted a poverty stricken family with a paralytic father who “lay on a small bed”, a coughing mother, a sofa with springs coming out, a dripping roof, and “a sister waiting to get married” (because they had no dowry to give for her marriage). Raju was always afraid and so relied on lucky charms for a less scary future. Later, Raju will face a possible expulsion from college which can only be revoked if he witnessed for Mr. ViruS, the college director, for the expulsion of his friend, Rancho. Not wanting to betray his friend nor face his parents’ heartbreak with his getting expelled, Raju attempts suicide and ends up in a comma. But with the constant care and support of his mother and friends, Raju recovers and gains new-found confidence as influenced in him by Rancho. With this, he will impress corporate agents in one job interview and get hired. In the story, Raju gets a chance to cheat to pass a difficult exam but refuses to, and chooses to make it with “his own ability”.

Raju’s character demonstrated valuing genuine friendships, courageous honesty, and earning your way fairly. And there was Rancchoddas Shyamaldas Chanchad, or Rancho, who came to ICE for the pure passion of learning. He was introduced as a gifted student with a practical mind, a noble character, and an outlook that didn’t agree with the school system and the family traditions in the story. Rancho didn’t bother to compete for grades or adopt to the college’s dog-eat-dog system. Professor ViruS despised Rancho and how Rancho outwitted him in most of their arguments. Professor ViruS thought that grades and the favor of his teachers didn’t bother Rancho because he was a rich man’s son. If he doesn’t graduate on time, he could afford to come back the following year.

Rancho, Raju and Farhan will become best of friends. In the movie, we see how the attitudes and outlook of Raju and Farhan are reformed by Rancho’s friendship and by the excellence he exhibited in his studies andprojects. Rancho would also later win the respect of Professor ViruS. This is after the professor experiences for himself Rancho’s nobility and witness Rancho’s gift with machines when his daughter would give birth in a table-tennis room. This incident will change the way the director perceived Rancho. Despite the hurdles Rancho faced at ICE, he earns the engineering degree and graduates as the top student. He then vanishes, to be sought after by his friends 10 years later. As they searched for Rancho, they are surprised to discover Rancho’s true identity.

Rancho is really the son, not of a rich man, but of a rich man’s gardener. Since childhood, Rancho already displayed so much desire to learn. Because his father’s boss wanted a good reputation for his son—the real Rancchoddas Chanchad—the rich man proposed to send Rancho to school to earn an engineering degree using his son’s name. Finally finding Rancho, his friends learn his real name, Phunsukh Wangdu, now a renowned scientist who is sought all over the world. We learn a lot from Rancho’s free spirit. He refused to imprison himself in competition and expectation. He was excellent but his purpose is not for recognition or just to impress others.

He lived the desires of his heart, which are machines and great friendships. His mantra, “All is well. All is well”, reminds us that we cannot control situations, but we can control our attitude and perspective. Rancho also talks a lot. He does a lot of explaining and convincing to his friends. But he backed up his words with weightier deeds of love, kindness, and sacrifice. And I think that is what the writer intended to convey—that his deeds more than his words are what really won the people around him. In real life, I believe that the qualities of Rancho—nobility and excellence without conceit—are attainable through passion combined with faith in God. Going back to Professor Viru Sahastrabudhhe (ViruS), director of ICE, he is the “adversary” of Rancho and the one who sets the “compete or die” system at ICE. By excellence he meant being ahead of everyone else. He despised Rancho who opposed these beliefs, However, Rancho always outsmarted him. In the story, Professor ViruS is the figurative “murderer”. His extreme conviction to always push oneself to the limit provoked three suicide incidents in the story—that of Raju, of another student named Joy, and of his own son (as a backstory).

At first, Mr. ViruS thought his son’s death was just an accident. Later, he will learn that his son committed suicide because he wanted to quit engineering and become a writer instead. After learning this, and after Rancho performs the emergency birth delivery of Prof. ViruS’ daughter (as mentioned earlier), Prof. ViruS outlook changes as well as his perception of Rancho. Here, we learn that the best way to a man’s heart is through “junior” (or daughter). Also, we are reminded again of the importance of communication. Prof. ViruS didn’t know that his son detested engineering so much that he preferred to commit suicide. One character who shared and followed after Prof. ViruS’ morals is Chatur Ramalingam, who was known in ICE as “Silencer”. He was called as such because he drank pills that would make him pass gas. He would take these pills nearing the exams so when he passes gas, the unpleasant odor would distract his roommates from studying well. He thought this would give him a better chance of topping the exams. Chatur was also excellent. In fact, he was second in score rank to Rancho.

But Chatur was always miserable, because like Prof. ViruS, getting ahead of everyone was his ultimate goal. Chatur reminds me of the story of a frog who wanted to be the highest “jumper” in his pack so he cut the hind legs of the other frogs. From Chatur’s bad example, we are reminded of a good lesson that says, the only person you need to be better than is the person you were yesterday. Towards the end of the story, Chatur, along with Raju and Farhan, finds Rancho 10 years later. Thinking that Rancho became a primary school teacher, Chatur mocks Rancho’s work and salary. Another good lesson here is to not be quick to speak, judge, or boast as Chatur did who belittled Rancho just before finding out who Rancho had actually become. Rancho, who is actually the renowned scientist, Phunsukh Wangdu, and who had 400 patents to his name, is the same man he’s looking for to woo and get to sign a multi-million dollar deal with his company.

Overall, 3idiots is a truly engaging film. The story is brilliant and the lessons to be learned are immense. We see the importance of extending a little understanding and consideration and the danger of holding it back. A little understanding could mean a lifetime of happiness; and depriving it could lead to serious depressions, miseries, and even death. I believe that the life stories of the characters in this movie are very relatable—peer pressure, poverty, and family’s expectations. But the story is also very liberating— don’t be a prisoner of expectations and competitions. Be freeto live your dream! 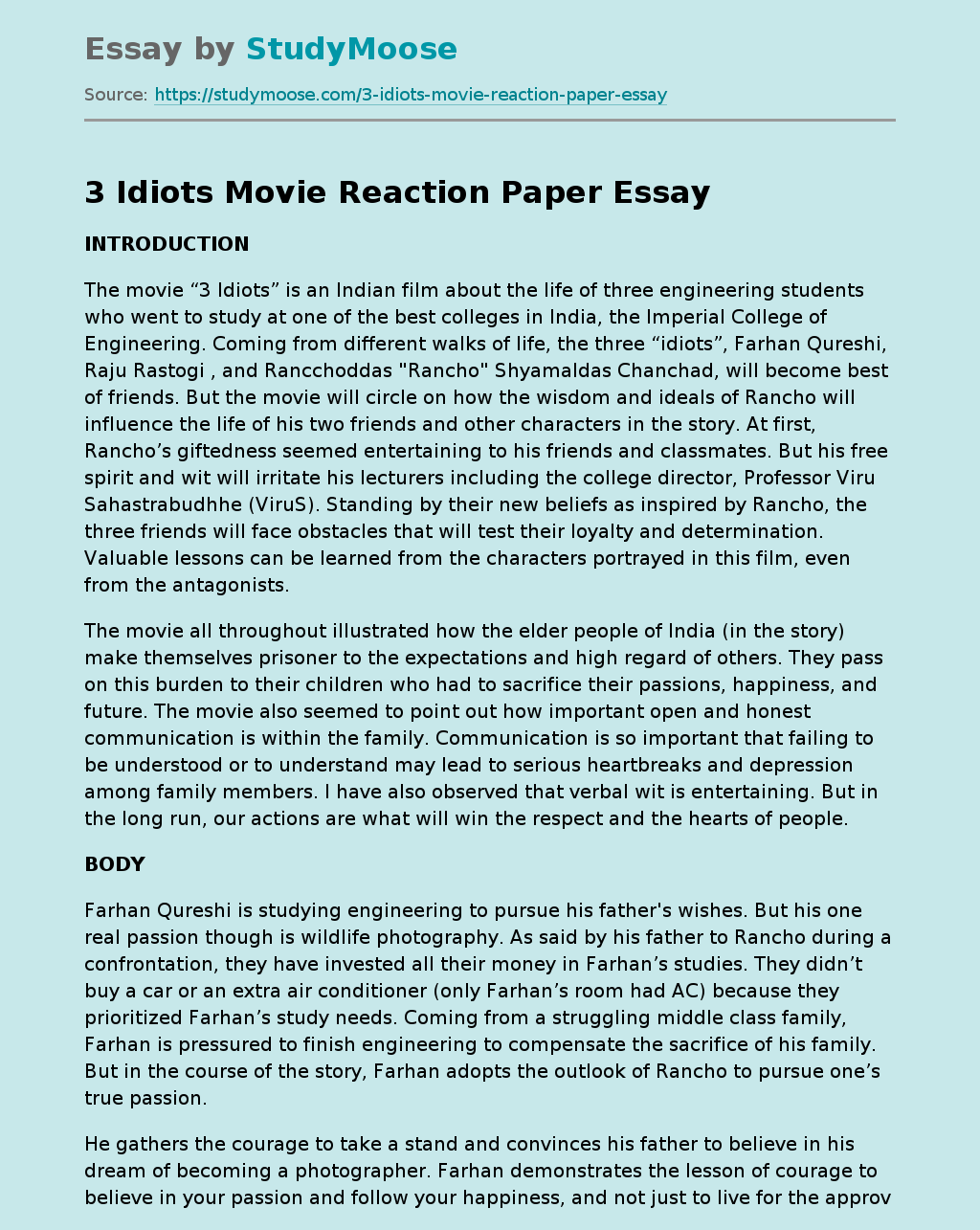