The movie 3 idiots is a Hindi movie that was released in 2009 under the direction of Rajkumar Hirani and production by Vidhu Vinod Chopra. The movie is currently the highest grossing Bollywood film and is critically acclaimed by film critics as one of the best foreign films of all time having won numerous awards both in and outside India.1

The movie features the college life of Rancchoddas “Rancho” Shyamaldas Chanchad, Farhan Qureshi, and Raju Rastogi who were engineering students at the Imperial College of Engineering.

Don't use plagiarized sources. Get your custom essay on
“ Reaction Paper on 3 Idiots Movie ”
Get custom paper
NEW! smart matching with writer

The plot revolves around the trials and tribulations that they went through after they have incurred the wrath of college dean, Professor Viru “Virus” Sahastrabudhhe, and his model student, Chatur “The Silencer” Ramalingam. The film is mainly about hope, family, and the pursuit of happiness.

There are several life lessons being taught in the film. Personally, among these lessons, the most important are the pursuit of excellence through passion and not just the pursuit of success, the importance of life and its beauty, and the significance of hard work as well as the danger of living a mediocre life.

These three lessons, if inculcated, will not only lead to a successful life but will also lead to a life that is worth living. II. BODY

The film also reiterated old adage that when one’s profession is also his hobby then passion becomes the profession which eventually leads to excellence in life.

The motion picture also imparted the importance of life and showed how beautiful life is. The film encouraged its audience to live life to the fullest as if it’s the last day on earth because life is God’s gift to man. The movie also stressed the beauty of life and that the pursuit of happiness is the “end all and be all” of living. Further, the importance of making a difference to the lives of others is also highlighted in the film. The 3 Idiots also highlighted the importance of hard work and the danger of living a mediocre life. Although the movie encourages humility in the pursuit of excellence and as one of the characters best said it ‘Legs down to earth and eyes looking beyond the sky’, people must not be afraid to fail and must not be terrified of going out of their comfort zones and pushing their boundaries to the limits. Additionally, most Filipinos can relate to the movie especially because the setting revolves around the importance of education, poverty, friendships, and love for the family which are topics that are close to every Filipino heart. III. CONCLUSION

The movie may not be considered as an “obra maestra” but it embodies important, inspirational and life changing lessons that is not commonly seen in most films. There are only a handful of movies that can transform their audiences into better persons in just two and a half hours. Lastly, The film should be part of the curriculum of both college and high school students as well as vocational schools in order to fully impart the valuable lessons in the film with the hope that the film would bring out the “Rancho” in everybody. 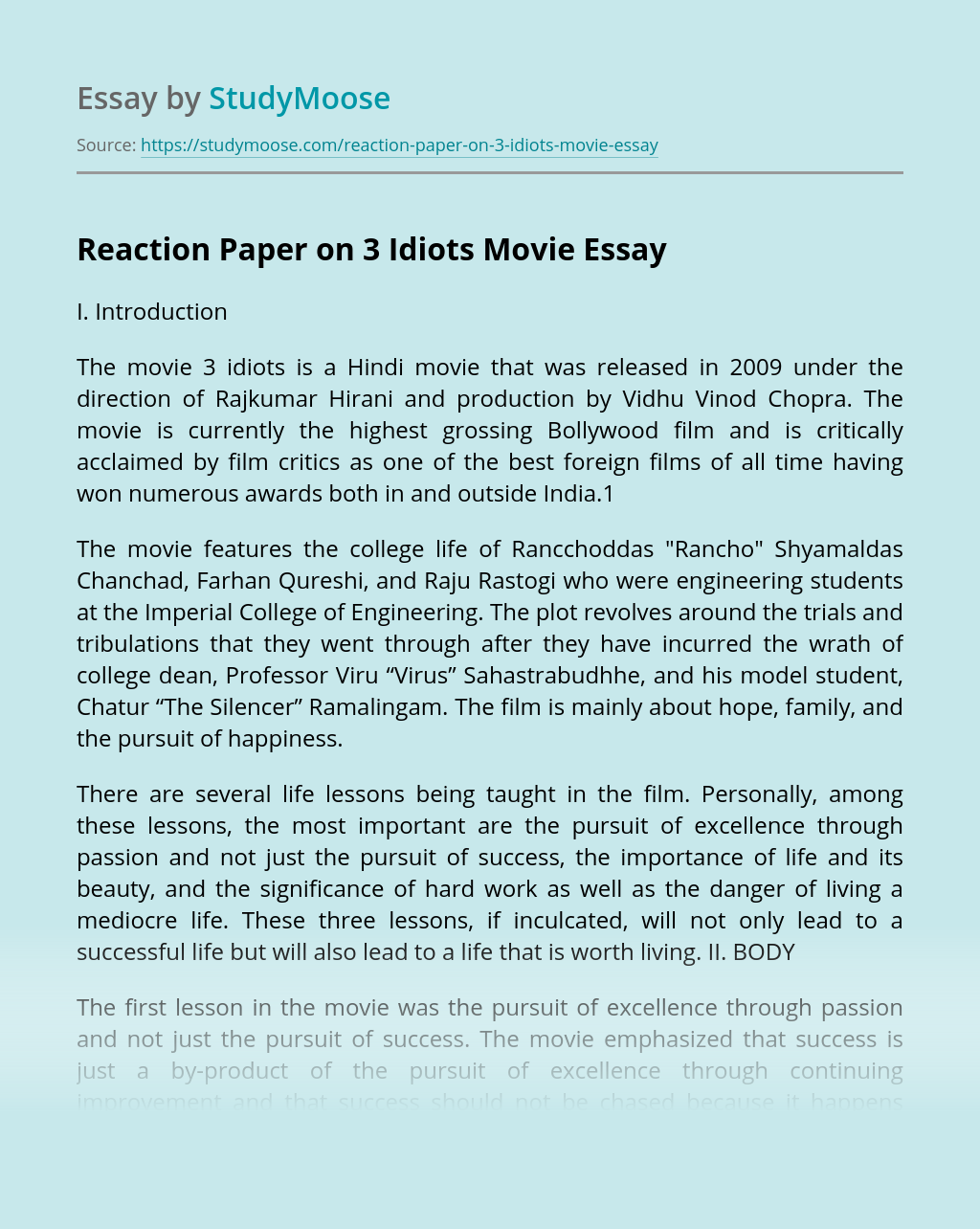