The Narcotics Anonymous meeting which I attended was named 7 Days of NA which was located on 1212 North Wolfe Street at an organization called Dee’s Place. Just as the Alcoholic Anonymous meeting previously attended, the location appeared to be in a covert and quiet place to hold a support group. We entered through the rear entrance, which seemed to be staged that way to secure participants identity. As before at the last support group I attended, I searched around the room to see again, a 12 steps guide posted on the wall, a relatively thick NA ‘Basic Text’ textbook on the desk of the facilitator and this time there were more participants in attendance.

There were approximately 20 woman and men in attendance, predominantly African Americans and two Caucasian women, however a majority of the attendees were women. All of which we either their due to being court ordered or there for the regular daily attendance. Before I was able to sit in my chair I was approached by a group of women, who appeared to be regular attendees, who greeted me with hugs and welcomed me to the meeting.

After attending the AA support group, I felt as though I already knew what to expect and how to effectively receive the stories of how some of the individuals overcame substance abuse addiction. The meeting began with the facilitator reciting the Serenity Prayer, then she asked if anyone was new to the meeting. Again I was nervous and uncertain how to respond so I looked around but did not stand up because I did not want to be acknowledged.

They then made announcements, where I then witnessed three people receive key chains for being 1 week clean. Though to some being one week clean may not pose much significance, however to the individual who sustained their sobriety for that period of time, it was proven that it was an enormous step for the individual. To me I believe the use of the key chain is a great aspect in motivating the individual to continue making progress towards their goals. I observed that when each person who had the floor recounted their stories of addiction, everyone appeared to have much admiration for the person sharing their story.

I observed that before sharing their story they started with an introductory statement saying “Hi, my name is Janet, and I am an addict” and much like AA after each individual recounted their stories they thanked the group for having them while the grouped responded “Thanks for sharing”. This group, like AA appeared as though they were a unified family. Everyone listened to what each other had to say with no interruptions, no biases, and all appeared to be in support of one another. After listening to several stories of individuals suffering from addiction of various illicit substances to include mainly heroin, crack-cocaine and benzodiazepines, I was in awe as to how early some individuals began abusing drugs. Some of the participants started using drugs as young as 12 years old while some have been abusing drugs for as long as 20 years. However many participants identified as being clean for several years to include one woman who was clean for 15 + years, which made me reflect on how strong these individuals must be to overcome such a powerful disease such as addiction. I noticed that though they have been clean for so long, they still dedicate themselves to attend NA meetings to assist in maintaining their sobriety.

According to Gossop, Steward and Marsden (2007), it has been proven that attendance in 12 step self help groups including AA and NA meetings shows increased abstinence, improved psychological health outcomes and improved substance use outcomes. Expressing their stories of addiction to the group, for myself may appear to be seemingly hard and embarrassing but with a group of such empathetic and supportive members, recanting their stories came with ease. Once again I was asked if I would like to share my story, however this time I was more prepared and quickly and respectfully declined the opportunity to share a story with the group. Many participants engaged the group with stories of overcoming addiction or being sexually molested by family members as reasons behind their addiction. However all of their stories were compelling and empowering to the group of individuals who have seemed to endure some of the same sentiments as their fellow group mate.

It appeared as if the individuals in the group even though that were court ordered appeared to be extremely engaged and very involved during the meetings. It seemed as though most who attended found peace and solice from the group during the NA meetings. As it stated by Krentzman, Robinson, Moore, et.al (2010), client’s state that their top two reasons for attending NA meetings were to promote recovery/ sobriety and to find support acceptance and friendships. One thing that I learned from the NA group that just as in AA, family support deems to be an important function on the perseverance of an addict and that the participation and involvement of family is detrimental in the treatment process for the addicts. In several of our readings many of the passages discussed the effects of family systems support as it pertains to substance abusers chemical addiction. The passages described the family system as being a detrimental part of the treatment process as well as for the treatment of the family as well.

According to past studies, family involvement has aided clients in sustaining abstinence from drugs/alcohol and studies also show that those individuals with extensive family involvement in therapy reported higher numbers of clients being abstinent after six months as well as a much better family relationship (Crnkovic & Delcampo, 1998). After listening to all the stories of both feelings of defeat and success, the environment felt so warm and opened. Everyone made each other feel like no matter how long someone has been addicted or whether someone has fallen victim to relapse, they were still a part of the family and they were there to aid that individual in getting through their demise. Everyone motivated and supported each other to succeed. At the close of the meeting, everyone stood in a circle while everyone embraced and recited the Serenity prayer again.

I believe that NA is an extremely important aspect of the treatment and intervention process of addiction, because it allows the individual to open up to those who have similar issues and who can emphathize and relate to what that person may be going through because they have or are in the same predicament. Longitudinal studies has proven that having an affiliation with NA has a greater likelihood of sustaining abstinence, improved social functioning and self efficiacy (Humphreys, Wings, McCarty , et al., 2004).

As it relates to social work, advocating for self help groups such as Narcotics Anonymous are detrimental to the treatment process of addiction. These groups provide, advocacy, support and education to their clients which are all essential in supporting addicts in their treatment recovery. Working with these individuals requires empathy, understanding and comprehension of the disease model of addiction, to be an advocate for not only clients facing addiction, but for the surrounding urban communities which are consumed with the drug abuse epidemic daily.

Anonymous meetings, frequency of attendance and substance use outcomes after residential

help organizations for alcohol and drug problems: Toward evidence-based practice and policy. 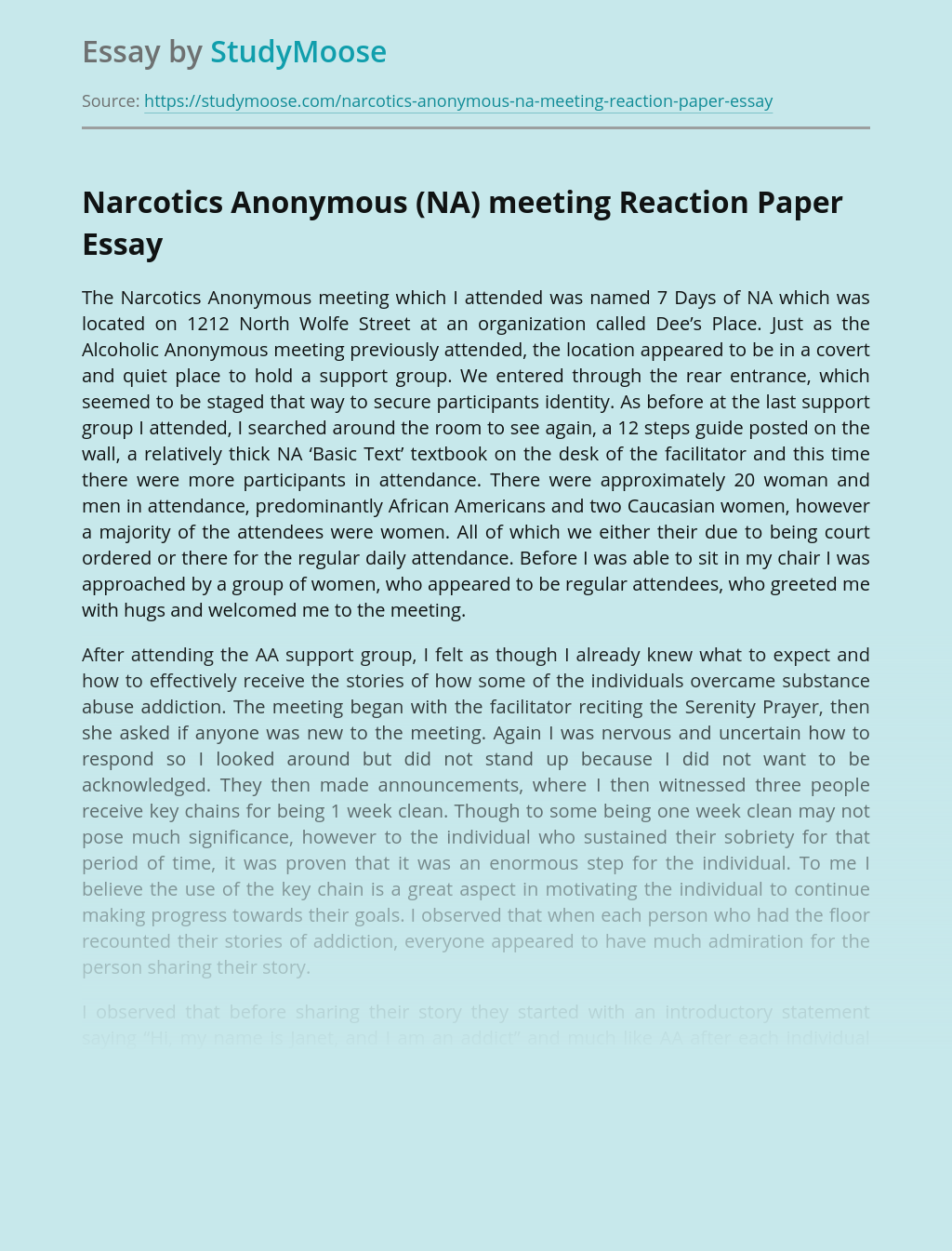 Drug Use and Delinquency

Introduction: Hair is an important physical evidence, can be easily collected and stored at room temperature. Hair is made up of keratin protein, these keratin mixtures give advantage over usage of conventional biological evidences for determination toxicology of drugs in hair (Kintz et al., 2004, Musshoff et al., 2004). Detection window of drug abuse in...

Understanding of Substance Abuse Based on my understanding, substance abuse can be defined as the misuse of illicit, legal and harmful drugs which is used for mind-set adjusting purposes. It also threatens to harm the physical, social and/or emotional wellbeing of the user or different people or society by extension. Difference between Substance Use, Abuse...

INDIGENOUS PEOPLE REACTION PAPER WOW! After the symposium, I realized how lucky I am to be in a concrete house, not worrying if the strong wind will take it with all its might; to live in a more comfortable house with comfortable clothes on. Indigenous people’s always stressing the hell out of them searching for...

Introduction For many years, individuals have battled substance abuse and addiction. My position comes from hearing about it, having seeing results from it, and reading about it, also developing my own thoughts about addiction. Weil and Rosen (1993) believe that a drug use (and addiction) results from humans longing for a sense of completeness and...

Specific Purpose: I will inform my audience about Narcotics Anonymous. Central Idea: Narcotics Anonymous is a worldwide self-help organization that has been around for many years and continues to impact our society. Introduction Attention Getter: Imagine 60,000 people in one city, all dealing with the same problem, addiction. According to an article written by Carter...

Thesis Statement: In this paper, I will try and analyze addiction and the various behaviors that addiction will induce in an individual, and I will also describe the kinds of addiction that an average individual is prone to, and research the efforts that are being made for an addict to try to control his offensive...