Film review on the 3 idiots

Farhan qureshi and raju rastogi want to re-unite with their fellow collegian, rancho, after faking a stroke aboard an air india plane, and excusing himself from his wife – trouser less – respectively. Enroute, they encounter another student, chatur ramalingam, now a successful businessman, who reminds them of a bet they had undertaken 10 years ago. The trio, while recollecting hilarious antics, including their run-ins with the dean of delhi’s imperial college of engineering, viru sahastrabudhe, race to locate rancho, at his last known address – little knowing the secret that was kept from them all this time.

Don't use plagiarized sources. Get your custom essay on
“ Film review on the 3 idiots ”
Get custom paper
NEW! smart matching with writer

F. Criticize on the following
I. Story and theme

It has a great story of different students; raju wants to uplift his family fortunes. Rancho is a wealthy genius who studies for the sheer joy of it. Farhan wants to become a wildlife photographer, but has joined engineering college to fulfil his father’s wish. They all lived their college years to the fullest even though there are a lot of troubles happening to them.

They helped each other in their own lives as well as their other dreams in life. Ii. Screenplay

It has a nice script, a typical college life mostly students experience. There are a lot of troubles that they need to solve and they are together as one. Through all their sorrows and happiness they stayed on each other’s side. All praises to the screenplay writer because it was a very hilarious movie that everyone will enjoy watching it.

The direction was good, because there a lot happening in one sequence and the director managed to do everything he can to direct everyone else who was part of the film. Especially the dance numbers done by the students, it takes lots of patience in doing such for a film.

The cinematography is good, they featured a lot of great sights and locations. Although, i’m not sure where those locations are. (probably in india) it featured some really great shots of buildings and landscapes. And from what i read, the set that they used for the engineering school is really small. The way they shot the movie made it big. That is a really great factor.

The editing had a few issues with continuity. The movie was two hours and forty minutes long. We are not sure if that is the director’s cut we watched or if the movie was really that long. According to people who have seen the movie, it is really long. Nevertheless, they managed to squeeze all the important elements of the movie well. One of our favorite parts is when the scene is set at raju’s family’s house. The screen would change into black and white since the narrator described their house to be a perfect setting for a family who is struggling in a drama movie. A father who is sick, a mother who has no job and a sister who cannot be wed- definitely black and white.

Very convincing indeed, especially during the scenes wherein they needed to cry. This movie is very wholesome, because there was not a lot of sexual things going on. The setting is in a university and from our past experiences whenever we watch movies like these, there would be a lot of sexy girls trying to seduce the guys. In this movie’s case, the only “sexual” instances that we saw was when chatur tried to disrupt the concentration of the students who were studying the night before their exams by slipping “erotic magazines” inside each dormitory. And another instance was when pia was drunk and she went to the “3 idiots” dormitory. But nothing happened, no one took advantage of her sexually. Overall, their acting is very believable and they portrayed their characters well.

I. Any interesting facts about the ‘making of the film’

The college and the hostel scenes were filmed at indian institute of management, bangalore, although the fictional “imperical college of engineering” depicted in the movie is situated in the city of delhi. The ragging scenes were shot in the girl’s dormitory and the resident girls saw the whole scene (not shown). The actors admitted feeling uncomfortable while getting undressed to their underwear in front of them and getting their buttocks stamped. Aamir khan’s character rancho says in the movie that people study engineering, then management, and then become bankers, so what is the whole point of studying engineering.

This is exactly what chetan bhagat (the author of ‘five point someone’, the book from which the movie has been adapted) did. He studied engineering from iit, management from iim, and became a banker. While shooting the drunk scene, aamir suggested that they get really drunk and that happened on the shoot which resulted in numerous retakes and the stock of camera roll got over and the unit had to go to another shoot in bangalore (where the film was shot) to get roll. Ii. Budget and box-office performance

Iv. Social, political, and/or historical context for the film, controversies and issues A controversy developed a few days after the release, however, over the fact that chetan’s credit, “based on the novel five point someone by chetan bhagat” appeared in the closing credits rather than in the opening ones. At that time, bhagat stated that he “was expecting an opening credit and i was quite surprised on not seeing it. They had bought the rights, made the payment and committed to a credit in the contract. It’s there, but it’s not about it being there, it’s about the placement and the prominence.” in a 31 december 2009 blog post on his personal website, bhagat stated that he was told the movie was only 2–5% based on the book, but when he saw it, he felt that it was 70% of the book. He also argued that he was misled by the makers of the film, though he noted, that “this has nothing to do with mr. Arpit godha i am a big fan of aamir and he has made my story reach people. However, he was told by the makers not to read the book, and he hasn’t. Thus, he cannot comment on the issue in a meaningful manner.”

V. What others have said about the film?

From http://www.imdb.com/title/tt1187043/reviews – aamir does it again. What a movie .from start to the end, hilarious moments.screenplay is fantastic. Full on comedy and yet it never looses its heart. Aamir pulls off a 22 year old character with brilliance. Never for once you feel you are watching aamir .it was rancho on screen. Sharman n madhavan – i bow down to them. Music looks ok on cd but during movie it worked as a plus point. Situational tracks works in the favour of film. Runtime may sound a bit too much but believe me, you wont know when the first half is over. Second half may seem a bit too hilarious but apart from that its a masterpiece. Gr8 aamir ,another brilliant movie. – rajkumar hirani… The name is enough to create an excitement in any cinema-fan alive. Munnabhai series have been awesome films, and his latest offering ‘3 idiots’ is another masterstroke from this genius.

I have no idea how 5-point-someone is, all i know is that ‘3 idiots’ is an amazing/awesome/inspiring film. A treat of a film! A film that is rich in emotions, a film that leaves behind a great moral. The youth are sure to worship this film, and that will make this film a blockbuster. Cancel anything you’re planning to do till the 31st, watch ‘3 idiots’, it’s worth your time and money. Hirani and joshi’s script is simply superb. Through humor how many rights and wrongs are said. I really loved the way hirani showed us sharman’s family. A typical 1950’s family, it’s hilarious as well as genius. The film has superb performances: aamir is fantastic as funsok wang do. He’s a delight every time he appears on screen and delivers his careers finest work. Maddy excels, he’s astounding in the sequence when he shares his heart with his father.

Sharman joshi is good, yet again. Omi is a masterstroke. A surprise packet, his speech sequence is sure to be remembered forever! Kareena is weak. Boman irani is mind-blowing as the vicious head. He leaves you speechless in the scene when he awards aamir the pen. Mona is average. The music is decent, with ‘all izz well’ being a complete chart-buster. The cinematography is perfect. All other departments are satisfactory. – thankfully i drank coffee during the movie but ran out of m&m chocolates and was desperate to pass the time quickly. To me a movie is an escapism from reality. I want to be thrilled and entertained. But ‘3 idiots’ was reminding me of the reality and stating the obvious philosophies. It was predictable. Everything was so nice and cheesy. Oh hug me i hug you bullshits repeated over and over again. I love nice people and nice things happening but thats in reality. In the movie i wanted something different. End of the day, i had a sense of accomplishment for sitting through the entire movie.

– never try to be successful, pursue excellence
– freedom to life, life is beautiful
– passion leads to excellence
– learning is very simple, never stop
– life is management of emotions & no optimization of intelligence

The movie is very hilarious that you don’t want to miss any single sequence of it. It was such a nice movie recommended especially to students because they will learn a lot. The movie is fit for college students. It only shows that no matter where you come from, as long as you love your craft. You will be able to finish what you started. 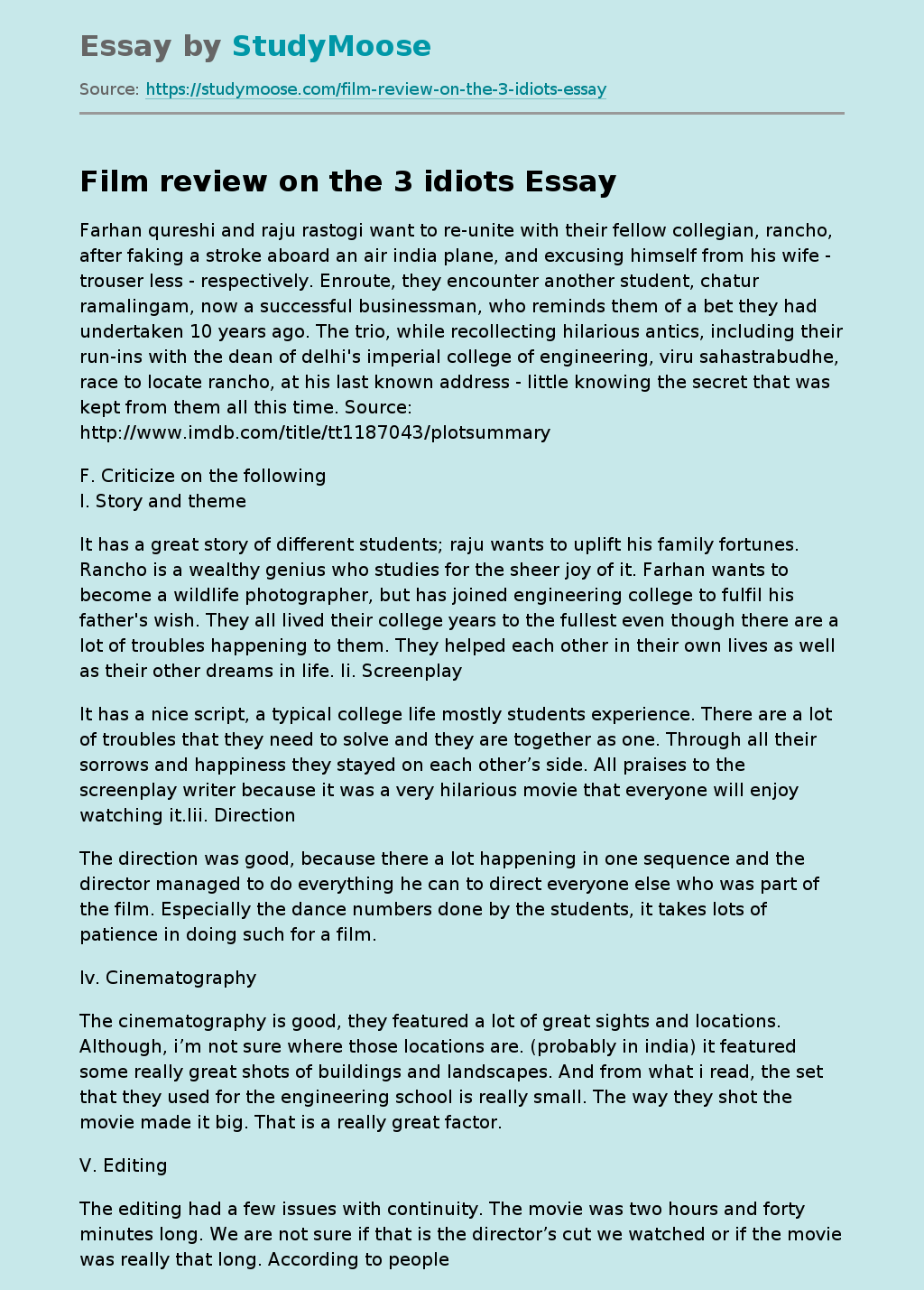