The Blind Side Film Review

The film, The Blind Side is the story of Michael Oher, a teenager from a poor neighbourhood that is given a second chance at an education and at having a family and a future when he is taken in by Leigh Ann Tuohy and her family. The film examines Michael’s the growth and strengthening of Michael’s relationships with the members of the Tuohy family and illustrates how the positive growth of these relationships allowed Michael to develop better communication skills with others and do better in school, in football and in life.

Don't use plagiarized sources. Get your custom essay on
“ The Blind Side Film Review ”
Get custom paper
NEW! smart matching with writer

The first member of the Tuohy family is SJ, the youngest member of the family. The young boy talks to him on Michael’s first day at a new school, where he is feeling outcast and self-conscious because he is the only African American student, he is bigger than everyone else and he isn’t as far along in his educational studies as the rest of the students.

SJ is not intimidated by Michael and tells him that people will want to be friends with him if he smiles at them.

SJ is a character that displays many affinity-seeking strategies towards everyone – smiling, being helpful, telling jokes – and here he is trying to share some of those strategies for making friends with Michael because he recognizes that Michael is uncomfortable. The result is that the two of them become best friends and, later, brothers. Michael’s relationship with SJ vastly improves both his self-esteem and his self-awareness.

He becomes more aware, through SJ’s coaching, of how he is perceived by others when he doesn’t smile and doesn’t talk.

This, along with SJ’s football coaching making him more confident and sure of his self-worth, improves Michael’s self-esteem and he begins interacting with other students and members of the family. Michael and SJ’s physical context of their relationship is illustrated in scenes where Michael works out using the smaller SJ as a weight to do push ups. The two are vastly different in size, but this doesn’t seem to bother either of them. Michael feels protective of the whole family, and this seems especially true with SJ since he is so much smaller than Michael.

The social and cultural context of their relationship is reflected in how they treat each other versus how Leigh Ann’s friends view it. Michael and SJ see nothing outside of the social norm in their relationship, but others, including the women Leigh Ann regularly has lunch with ask her if she’s worried to leave an African American teenage boy alone with her young son and daughter. This illustrates a social bias reflecting an underlying prejudice in the South, but the relationship between Michael and SJ seems untouched by it. A nonverbal behaviour of communication that Michael and SJ establish is the fist bump.

Whenever Michael aces a football play or gets a good score on a test he’s studied hard for, he bumps fists with SJ. There are no words exchanged between the two, and this gesture is a nonverbal congratulation between the two of them. Michael also uses the nonverbal message of eye contact with SJ in many social situations to make sure that he’s doing well and that things are okay. Michael still feels uncomfortable in the Tuohy’s affluent, mostly white world, and his nonverbal messages and confirmations with SJ help to put him at ease.

The relationship between SJ and Michael continues to engage throughout the film. Even when a car accident occurs involving both of them in Michael’s car, they only grow closer and the accident is an example of Michael’s willingness to risk injury to protect SJ. When Michael is looking at prospective colleges, SJ interviews coaches that come to recruit Michael himself, asking how much contact he will be allowed to have with Michael when Michael is at school. SJ’s active interest at such a young age is a message of a need in both of them to maintain and continue the relationship.

Michael’s relationship with Leigh Ann is another significant relationship in the film. Leigh Ann is the one that first lets Michael sleep on her couch, then makes the decision to become his legal guardian and help him with his future. Leigh Ann utilizes several verbal behaviours with Michael to cut through his apprehension and silence and make him be honest with her. She uses straight, direct questions and warns him not to lie to her. Michael trusts her and opens up to her because while she is direct, she is not mean or threatening.

But Leigh Ann is also guarded with her own emotions, using a generic phrase as a replacement for any expression of love or affection towards Michael or her children through the film. This is not necessarily an example of interpersonal communication apprehension, because the guarded verbal and non-verbal behaviour of both of them extends to everyone around them. It is more an inability or unwillingness to attempt self-disclosure, which both Leigh Ann and Michael improve upon, with each other’s help, towards the end of the film.

The relationship between Leigh Ann and Michael functions almost outside the physical context, because the two have very little physical contact through the film. One scene that is the exception is where they drive to Michael’s old neighbourhood so he can pick up some of his clothes from his mother’s. She tries to get out of the car but, fearing for her safety in the bad neighbourhood Michael reaches over her to lock her door and tells her not to get out of the car.

The comments made by the drug dealers on the stoop about Leigh Ann being a snowflake and Miss Daisy indicate that it is not an accepted relationship in this social context either, because the boys from Michael’s neighbourhood don’t understand the concept of looking at someone as rich and white as Leigh Ann as family. Leigh Ann’s individual communication pattern is to speak very directly and to the point, even if that means interrupting or cutting someone off. She does this with her children and her husband, but Michael’s refusal to speak makes her realize how the way she talks to others affects them.

In this way Michael helps her improve her self-awareness and as a result, her verbal communication with Michael improves. Leigh Ann also expresses anger and protection to communicate to others the importance of her relationship with Michael. When she is at Michael’s football game and a man starts yelling racist comments about Michael, she yells at him to shut up. Later, when Michael makes a great play, she turns around to the man again and proudly identifies Michael as her son.

This event strengthens her feelings for Michael and her indignation at others in society that don’t approve of him or of his relationship with her and her family. The final scene of the film conveys a message of communication that shows interpersonal growth in both Leigh Ann and Michael and their relationship. Michael is being dropped off at college and Leigh Ann, unwilling to let anyone see her get emotional or cry, says she is going to wait in the car. Michael follows her and makes her get out and give him a hug.

This shows her ability to move past her own physical and emotional boundaries and let herself be vulnerable, just as it shows Michael’s improvement of his verbal communication skills and interpersonal competence to be able to tell Leigh Ann to do something for him. This exemplifies how the relationship between the two of them has allowed each of the individuals in the relationship to grow, and how the relationship will be continued and maintained in spite of the distance incurred by Michael’s moving to college.

The Blind Side shows how one family could make a difference in the life of one disadvantaged youth, and also how the willingness of both Michael and the Tuohy family ended up changing the relationships and communication skills of all of them. These relationships are examples of interpersonal communication helping individuals to grow and become more competent and self-aware in spite of operating outside the social boundaries of acceptance.

The Blind Side Film Review. (2016, Aug 04). Retrieved from https://studymoose.com/the-blind-side-film-review-essay 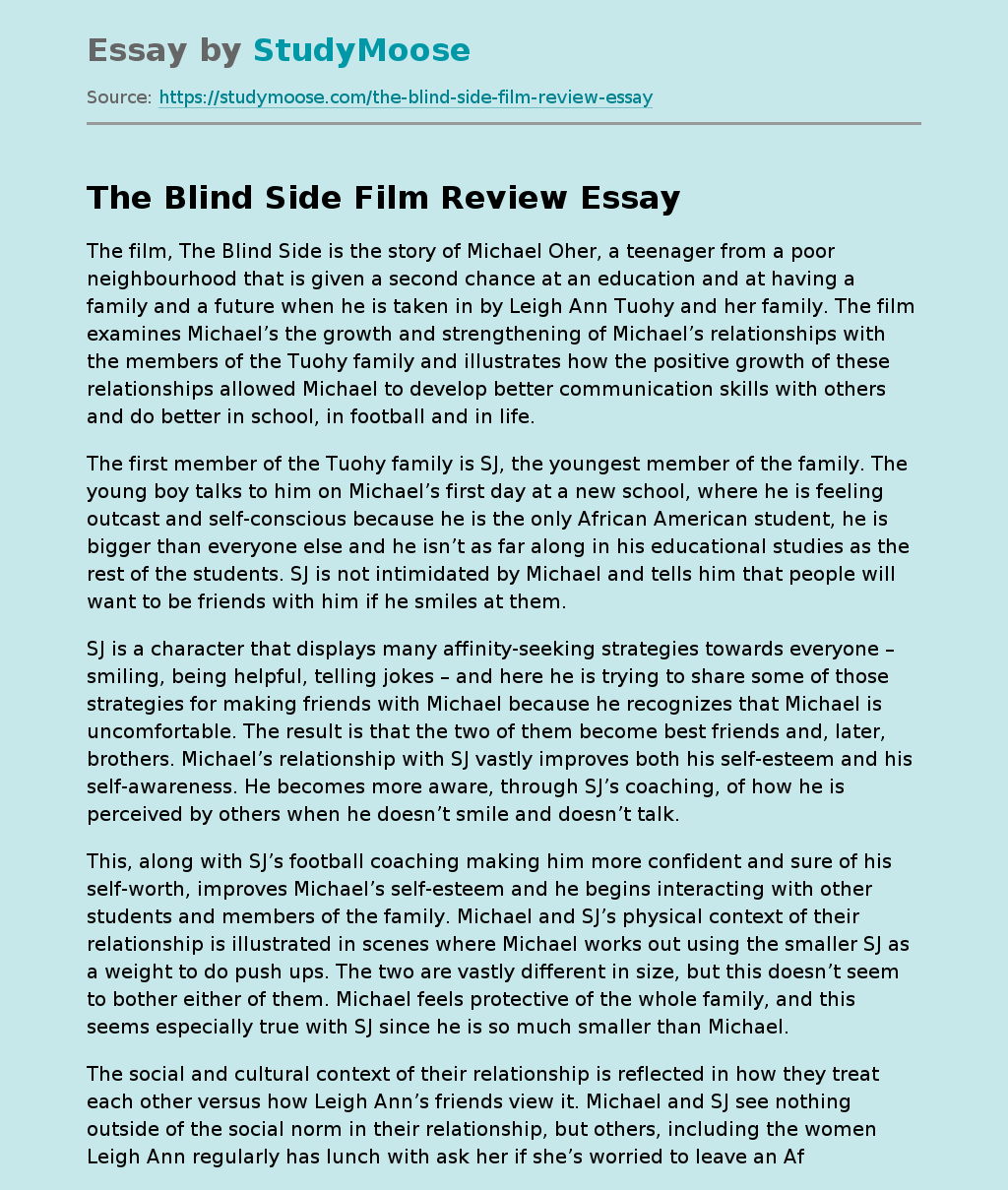