Stages of Development: a Review of the Movie, the Blind Side

Stages of Development: a Review of the Movie, the Blind Side BY Catamaran This movie-The Blind Side talks about how Michael O’er achieved his self-esteem during his adolescent time. Between the plots of the movie, we also included some development theories such as Erik Erosion’s psychosocial cognitive theory; Mascots hierarchy needs theory and also the operant conditioning theory that associated with Michaels development.

As an Introduction, Michael O’er was a famous Black American football player that came from a poor family that consist of thirteen children, an absentee father ND an alcoholic plus drug addict mother in the village of Memphis, Tennessee (Bell, 2009).

Don't use plagiarized sources. Get your custom essay on
“ Stages of Development: a Review of the Movie, the Blind Side ”
Get custom paper
NEW! smart matching with writer

In Michaels childhood, he did not enjoy any love or caring from his parent as both of them do not want to be in charge of him and the other siblings. Thus, Michael was taken care by many foster homes; but, he always ran away from those foster homes and back to his own house to take care of his mother.

Because of that, he was called as the runner by others In his village. The movie starts on with when Michael knew his father was shot and killed how he was promoted into Breviaries Christian high school by his Black friend’s father hen he was already seventeen years old Before this, Michael have been studied in eleven schools including his primary and secondary as all of the schools rejected him because of his poor attitude towards studies.

At first, the teachers of Breviaries Christian high school do not want to accept him; but, the school’s football coach convinced them to accept him with the reason of he was so talented In sports after watching the big size Michael playing basketball with his Black friend in their school’s basketball court.

Then, Michael has become the only Black student in that school. In the first day of school, Michael had scored zero for the quiz that given by his class teacher because he did not study those knowledge before.

In school, Michael had no White friends except for Sean Junior Tooth because of his body color; his big size-six Inch five with a weight of three hundred and nine pounds and also his lack of facial expression in school (Bell, 2009). Although Sean Junior has taught Michael on how to make friends by having a smiley faces, Michael still did not have the enough confident to mix among other White students.

Furthermore, the causes of Michaels unconfined or could be he did not fulfilled his needs of physiological as he only sleeps In a gym room nearby his school for nights. According to Appearance (Bibb one could not reach the self esteem stage which Is the self confident that absent In Michael when he did not fulfilled his first three stages of needs: physiological, safety as well as love and belonging needs.

After some days of study in the school, a letter that wrote by Michael was found and picked up by his class teacher from a paper basket; this letter have says that all just white in color; he do not know and do not want to listen what the teachers was caching; the homework that given to him was a problem for him as he never done any homework in life; all of those causes him to have the thought of he should not be studying here.

All of his thought in the letter have shown Michaels stage of identity confusion that stated in Erosion’s psychosocial cognitive theory where he have the decision to leave the school as it was not suitable and it was not the place that he wanted to stay during that time (Contracts, 2008). Michaels turning point in his life have came to him on the cool night before Thanksgiving where Michael was found walking alone with only short pants and T- hire on his way to the gym for a warm night sleep by Touchy family.

His loneliness had emotionally disturbed Sean Junior’s mother, Leigh Anne and she felt terrible for him and offered to shelter Michael at their house for that night. After the celebration of Thanksgiving, all of the Touchy family members had agreed to accept and adopted Michael as one of them. A touching moment in the movie was when Leigh Anne prepared a bedroom for Michael and he was so touched and kept asking Leigh Anne whether the bedroom is really for him because he never owned neither a bed nor a editor before. This was when Michael fulfills his basic necessities that stated in Mascots hierarchy needs theory.

After fulfilling his basic needs, Michael also achieved the safety needs where he had a sense of protection with his newly adopted family and environment that were surrounding him. According to Norway (2009), living in a safe place and having protection from other is very important for human beings. In home, Anne treated Michael O’er as her own child where she always gives him support such as bought him some new cloths to encourage him to tart a new life; she also brought Michael a trunk when he wishes for it. Besides than his adoptive mother, Sean Junior also plays an important role in the changes of Michaels life.

Because of the adoption, both of the boys had become buddies in a matter of seconds. After Michael Joined the American football team in school, Sean Junior had became Michaels personal trainer to brush up Michaels techniques and physical abilities in football. Collins, daughter of Leigh Anne also showed acceptance towards Michael when she ignores her friend’s impression towards Michael and hoses to accompanied Michael when she saw him study alone in the library. Besides, there are some positive reinforcements to encourage Michael to perform well in his study.

In school, there was a teacher who name Mrs.. Boswell never gave up on teaching Michael where she teaches him patiently and also gave him some extra tuition that improved his study from a grade C to a grade C+. According to the reinforcement theory, positive reinforcement increases the tendency to respond as family members, school teacher’s support are causing Michael to work harder in school (Marine, 2009). Because of the changes made by the Touchy family in Michaels life, he developed a sense of love and belongingness needs to his adopted family members.

The event happened can be explained by the theory of Mascots hierarchy of needs. He reached the third stage of need which is love need since he already achieved the first two stages of needs which are the physiological and safety very protective person where he even injured his right arm in a car accident in order to avoid the smaller sized Sean Junior from getting injured by the air bags’ pressure which might broke Sean Junior’s spinal cord. Although the accident was caused by Michaels carelessness in driving, but his quick reaction saved Sean Junior’s life and this made Anne to console him instead of blaming him.

After this incident, Michael relationship becomes closer to his adopted family and he promised to always protect them. The protective characteristics also helps Michael to boosts his motivation and passion towards football later in the movie plots. After achieve the sense of love and belongingness, Michael agrees to Join the football league to prove and achieve something that shows his development of self- esteem stage in Mascots hierarchy needs theory which is the needs to achieve, be competent, gain approval and recognition that stated by Myers (2006).

When Michael first entered the American football team, he was not a motivated nor a good player where he does not have a single clue of what the rules or even how to play it; until Leigh Anne told Michael that the football team is his family and he should always support and protect his family members in any situation Because of that, Michael have became the terminator that helps his school team won for the spring football match in March. Michael O’er played so well that he had gotten scholarships from different colleges and universities.

In order to continue his tertiary education, his grades must be improved. To do so, Leigh Anne hired a private tutor, Miss Sue to educate Michael for almost 20 hour per week. When Michael was down, positive reinforcement was given by Miss Sue in a form of a statement. For example in The Blind Side (Hancock, 2009), “l do not understand it! ” said Michael and Miss Cue’s reply was meet! You do not understand it yet! “. Reinforcement are always better than punishment because the behavior being enforced will likely to be repeated compared to punishment where it is not likely to be repeated (Mugger, 2007).

Stages of Development: a Review of the Movie, the Blind Side. (2020, Jun 02). Retrieved from http://studymoose.com/stages-of-development-a-review-of-the-movie-the-blind-side-2-new-essay 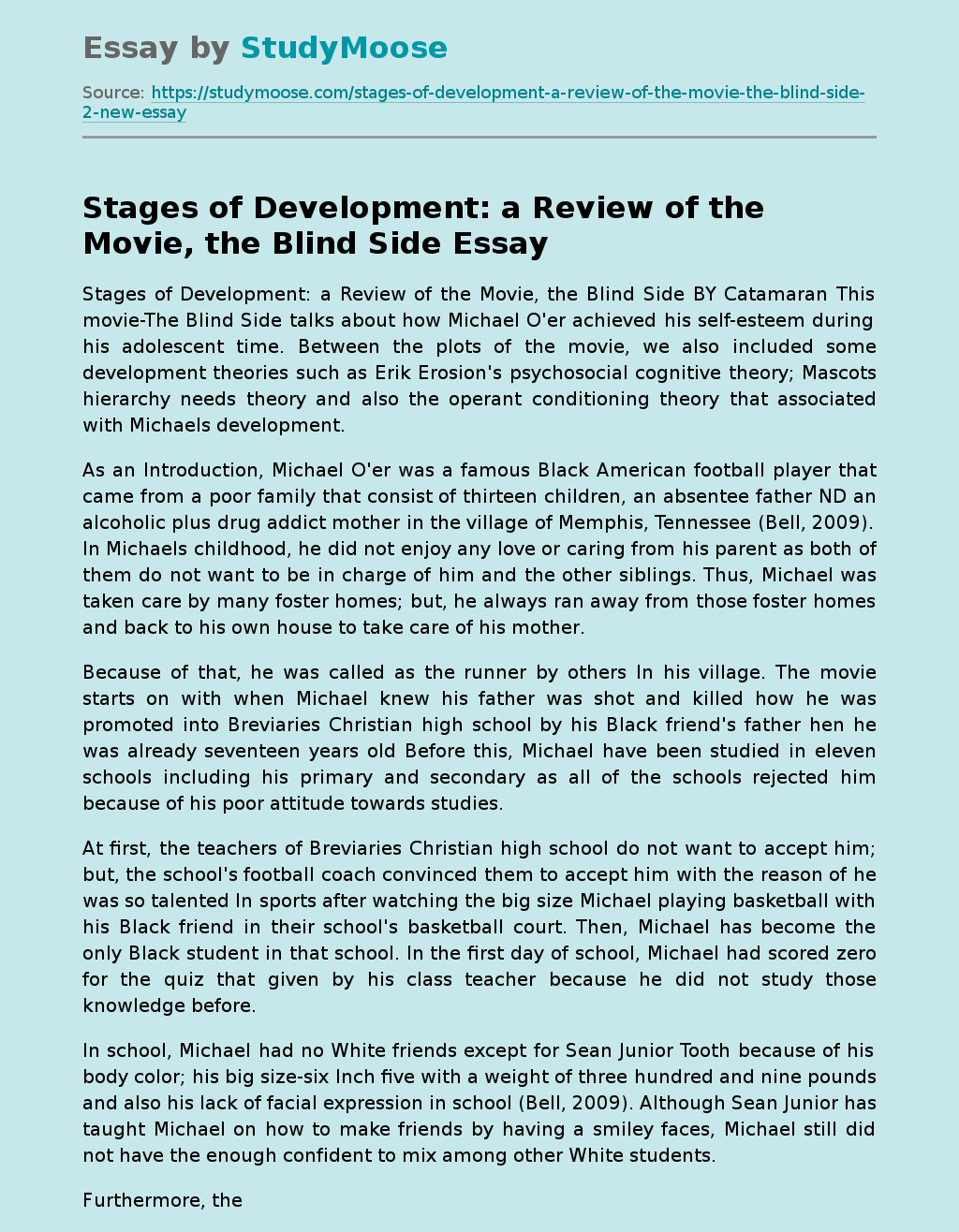