Book Report on the Blind Side

The Blind Side directed by John Lee Hancock was a visual text about a teenage boy named Michael. Based on a true story Michael, nicknamed Big Mike has grown up in a poor and broken family and goes to a public school where no one really cares about him. Growing up this way has left Big Mike emotionally deprived and lonely. Thanks to his Friend’s dad Michael gets the opportunity to go to a private school on a scholarship.

Don't use plagiarized sources. Get your custom essay on
“ Book Report on the Blind Side ”
Get custom paper
NEW! smart matching with writer

Suddenly he has teachers that care about him and while his life seems to be slowly improving, Big Mike still uses other people’s washing machines in the Laundromat, does not sleep at home and stays at the gym at school because it was warm. The biggest turning point in this movie was when Leigh Anne Touhy sees Big Mike on the side of the road and lets Big Mike have a place to stay. Leigh is a woman that gets what she wants and it is clear from the moment she meets Mike that she would care for him.

Proficient in: The Blind Side Movie

From this point Big Mike and Leigh build a strong relationship, he ends up moving in with them and becomes a part of the family. Michael is a big man and one of the reasons he was accepted into the school was because he had the perfect build to play American football and by the end of the movie Big Mike was one of the top players and went on to have a career in it.

My favorite character throughout the book was definitely Big Mike, I love how complex of a character the director made him. Appearance wise, Big Mike looked big and tough, he was the type of boy that you would walk the opposite direction when you see him on the street, but when you see him in the movie you discover how kind hearted he is. A classic example of this is when Big Mike is first playing football and he doesn’t tackle anyone because he doesn’t want to hurt anyone. He reminds me of a giant teddy bear that wouldn’t hurt anyone. But then as well as his kind heart if you dig deeper you can see the inner strength he possesses. From a very young age Michael is forced to look after himself and to get through it the way he did could only be done with utter strength. When most people are left with no one they give up but I admire Big Mike so much for turning to himself and doing all he could to make his life work. Not only is this but his loyalty unbreakable. To get Big Mike to tackle at the practice Leigh said to him to
pretend that these guys were going to hurt her and his family and that’s when he finally tackled with aggression. You could see then and there that Big Mike would take on anyone that tried to hurt his family and those he cared about.

To me it Big Mike is, for lack of a better expression, a total cutie. My favorite part of the movie is when Leigh asks Big Mike if he would like to be part of their family and Big Mike looks at her dead seriously and replies ‘I thought I already was.’ Throughout the whole movie it was this character that constantly impressed and engaged me and the fact that it was based on a true story just adds to this.

One of the main ideas in the visual text The Blind Side is courage. Leigh Touhy shows courage when she takes Mike Oher from off the streets and gives him a roof over his head and someone to lean on. This showed courage in the best of ways and it couldn’t off been done to anyone else. Although Leigh’s family did not agree with having Mike there in the first place, then soon got to like the guy and really enjoyed having him there as another brother or son. It also took real courage for Leigh and Michael to legally adopt Big Mike as a child, get his driver license and help him get into the best school available for Mike to go to on a football scholarship. Leigh also had courage for going to her own friends and telling them about Mike. A conversation held with her friends is. Friend: “You’re changing that boy’s life”

Leigh: “No He’s changing mine”.
I thought that Leigh had courage to say this to her friends as Mike is not her own son yet she is taking care of him as he is the only child in the family.

A quote from the film The Blind Side to represent Courage is “that’s why courage is tricky. Should you always do what others tell you to do? Sometimes you might not even know why you’re doing something. I mean, any fool can have courage”. This is saying that courage is important but it’s hard. You should do what you want to do and not what others tell you to do, but the main point is that anyone can have courage; weather their big, small, tall or short.

The text that I immediately thought of was The Dead Poets society and in particular Neil. The reason for this is in my mind I started to immediately compare the difference between Neil and Michael. As I previously stated Big Mike had to deal with the loneliness in his life and the way he did this was by turning to himself for support. I think the reason that Neil committed suicide was loneliness, by this I don’t mean that he had no friends, as it was obvious from the start he did, but that he felt like he had no support from those that mattered. If his dad had shown a slight interest in his acting career then Neil would have been satisfied but because his dad seemed not to care Neil felt like he had no one to turn to and no options. This is the difference that I see between Neil and Michael, inner strength. While Michael appeared soft throughout the visual text, to carry on living especially in certain points in his life took incredible inner strength and as much as I liked Neil’s character I don’t think he possessed the same strength. Neil is kind of the polar opposite, on the outside he appeared to be strong and content with life but on the inside the way his father was acting slowly killed him inside. Both of these characters had parents that weren’t at all good at their job but it was the difference between the two personalities that ended with one dead and the other a professional football player.

Book Report on the Blind Side. (2016, Apr 03). Retrieved from https://studymoose.com/book-report-on-the-blind-side-essay 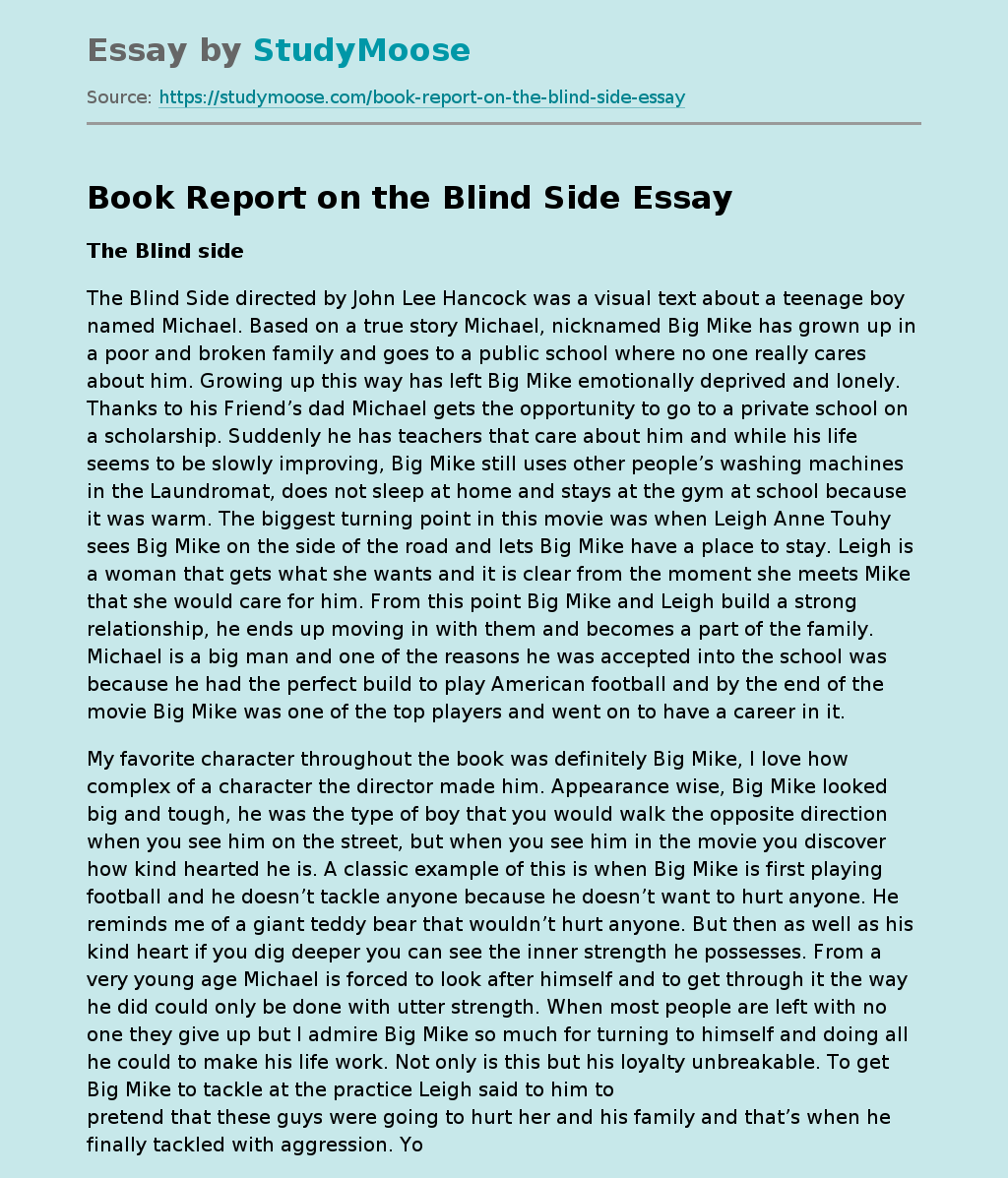