Within the human culture, movies have traits with uniquely and ubiquity. In 2009, cinema admissions have over 6.8 billion across major territories which roughly the same number compare with the world population (6.85 billion) and it generated global box office revenues of over 30 billion US dollars. (Shah,2015)

Nowadays, movies not restricted by one single form, instead, it could present in different dynamic ways. Movies or cinema is undisputed become one of the most powerful propaganda vehicles in terms of culture, education and entertainment moreover it also has the mutual effect with culture and society, in this report will simply illustrate the how movies coherent with social and culture via two movies.

Don't use plagiarized sources. Get your custom essay on
“ Movies, Culture and Society – Three Idiots ”
Get custom paper
NEW! smart matching with writer

The Birth of Nation:

As an integral part of American culture, movies always as a representation of dominant concerns, attitudes and beliefs. (Movies and Culture, 2012) For example, in 1915, The birth of Nation, director by D.W.Griffith. The movie, set primarily in a town in South Carolina before and after the Civil War, portrays slavery, presents black only good for submissive work and the abusive dominion by Southern whites during the Reconstruction.

(Nast, 18 June 2017) During the early 20 century which is the movie release time, waves of immigrants led to a huge fear and social concern around the mass culture, especially in racist attitudes. Social inequalities and nature human difference is prevailing in political atmosphere (Movies and Culture, 2012) Therefore, the largely success of film because it not only captures the social and culture tension in that era but also function as a mirror implicate the contemporary social problems at the meanwhile.

Throughout this movie, by telling the stories, it awakes the social awareness and strongly influence on cultural attitudes.

India education system is one of the largest in the world with 1.4 million schools and 227 million students. But in the largest education system, education is failing the majority of the children, students learning under an atmosphere where their marks define who they are and where do they stand in the crowd. (Prabhudev, N,2018) The movie “three idiots” which directed by Raju Hiraani, exactly reflecting the education reality in India, 3 characters has different purpose came to one of the leading engineering colleges in India, the films follow the friendship of three students and satire about the social pressures under an Indian education system and it inspiring the society that education does not require money, uniform or famous school instead it do require the strong will of learning. (Pareek, Shreya. 30 may 2014) Moreover, the movie gives a guide to the society that thinking critically and creatively education system should look beyond in high grades.

In general, cinema for any genre, from documentary to drama it not only reflects the anxieties or concern in the society but the most important is by telling the stories in order help to influence, shape and solidify a community and that is how cinema coherent with society and cultural. 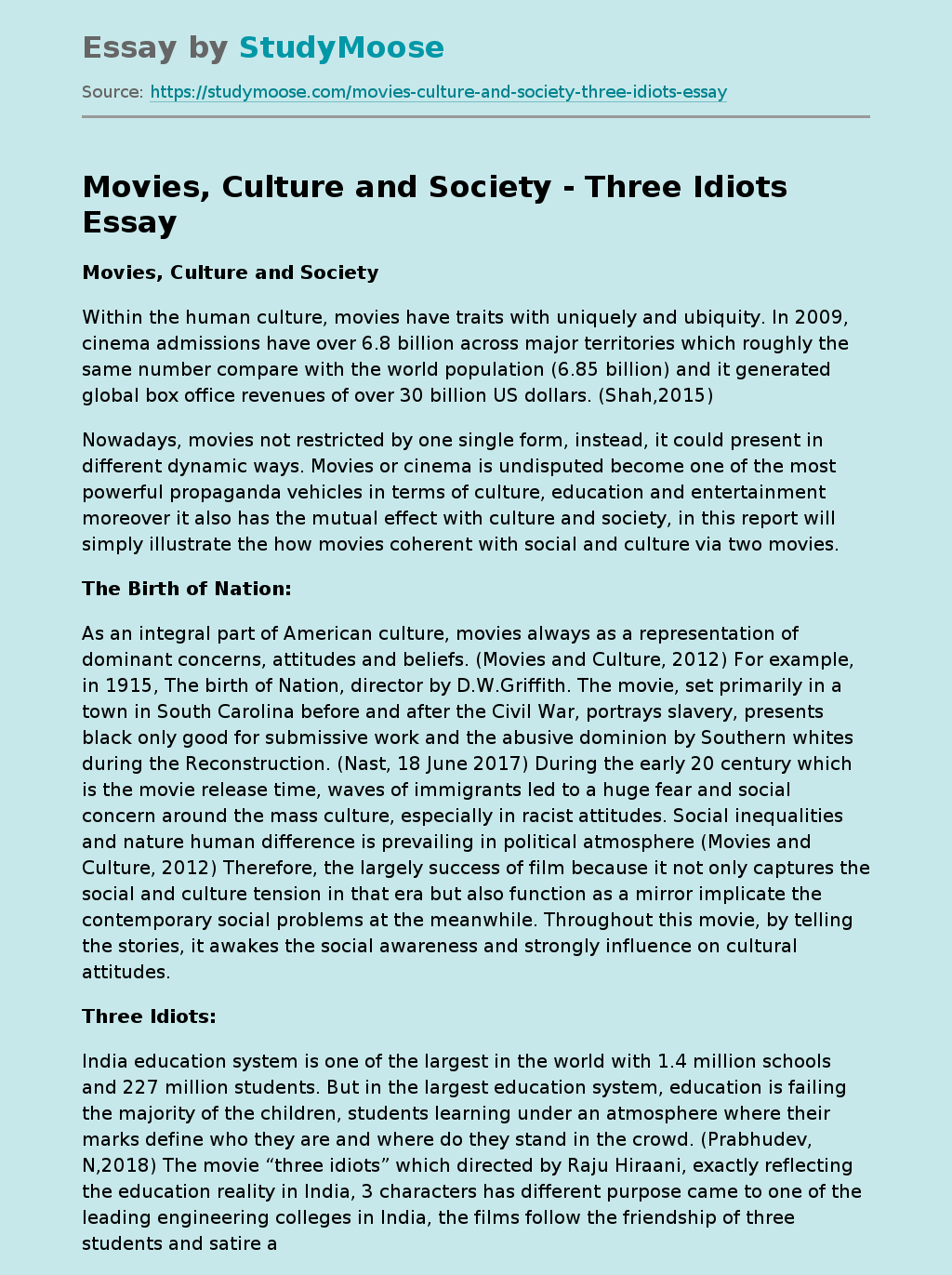