A movie review is always essential to determine how a film was received by the viewing public. This paper will contain reaction, study or analysis and the over-all assessment of the 1993 critically-acclaimed movie, The Joy Luck Club, based on Amy Tan’s bestseller novel with the same title. Particular questions will be answered by the paper aimed at establishing the multicultural psychology aspect and effect of the movie.

Relationship between the Chinese and White cultures and the various personalities, emotions and problems of the characters will be tackled.

Effort to to answer what made the movie interesting by worldwide viewers although it was about the lives and culture of the Chinese will also be contained in this paper. Joy Luck Club 3 The Joy Luck Club Movie Reaction Paper The Joy Luck Club is a Chinese or Chinese-American movie about four women who regularly get together to play mahjong.

The elderly Chinese women who now live in San Francisco have their own dreaded pasts and each also has a daughter for whom she has high hopes for a good American life.

Through a series of flashbacks, four young Chinese women born in America and their respective mothers born in feudal China, explore their past. This search will help them understand their difficult mother/daughter relationship. The four mothers have positions inferior even to their own daughters yet they are the ones who fought tenaciously for their grandchildren.

The fearful symmetry in those fearsome foursomes was evident every time the four play mahjong.

The statelier pace of the Tan’s novel which was made into a two-and-a-half-hour movie survived because of the interesting, dramatic and wider scope of the stories of four grandmothers, mothers, daughters as well as all the characters. The whole movie are stories on top of one another and dramas which made viewers very loose in their senses to allow them to be jerked at such speed and frequency.

Although the movie revolves around the characters’ intertwined miseries and issues such as daughters’ rebellion, matrimonial conflicts and even sexism, it was cited as the first Hollywood film in which Chinese people are presented as likable, normal human beings with their own lives to run and look after. (Simon, 1993). Multicultural Psychology The film is a good example of a material where issues related to multicultural psychology was depicted because two different cultures were tacked and presented.

Although the Chinese and American (or Western) cultures were initially taken as two poles apart, the movie was able to relate and mix one culture with the other in the end. Chinese history and culture dictate that they have to marry or choose a partner within their own and even arrive to Joy Luck Club 4 the practice of fix marriage among younger Chinese. It is the tradition of not allowing other nationalities to dwell into the Chinese culture and the demand for them not to be open into marrying foreigners and the Chinese women submitting themselves only to Chinese men.

However, the second generation characters of the movie, the daughters who were opened to other culture than their own, were able to break the practice by having foreign (American) husbands. The more liberated thinking of the daughters made them realize that there may be conflicts in having a non-Chinese partner but it is not the society, culture and even their own families that will dictate what they want with their own lives but their desire to love their husbands and build a family outside the two separate and opposing cultures. Obedience

Chinese are known for their obedience thus the practice of Chinese women marrying only Chinese men not just, or there may be times, not even for the purpose of love but more of the demand to follow what their elders have long been doing. For generations, the compliance or even the submission of the Chinese to their culture of not marrying non-Chinese was clearly imparted in the early part of the movie thus the conflicts between the mother and the daughters when the latter turned their back from the tradition and embraced the mixture of the Chinese and White cultures.

On the other hand, the film also pictured the open and free culture of the American characters who without inhibitions mingled themselves to the family of their partners even without thinking of how they will be treated or even if they will be accepted by the other culture. Conflicts and differences occur because of the mixture and clash of the opposing two cultures. The movie was able to present that such tradition of obedience was strictly adhered only by the older generations as the daughters were able to have their way out for their families to love their husbands and eventually accept the White culture. Joy Luck Club 5 Self-esteem

The casts got their self-esteem from the other characters. The liberated daughters, although born from mothers with strict adherence to their culture, were firm and very bold with their self-esteem. The daughters were very confident with what they think and say and what they want to do with their lives even to the extent of breaking their culture. Likewise, the culture-stricken mothers were too positive that they will be able to overcome hardships and conflicts within their families. Saving and giving face Saving one’s face and giving face can be best tested in a mother-daughter relationship because of the bond which keeps them together.

Such is a situation when a daughter gets involved with a man who her family will not accept. An example is when a daughter chooses to have a non-Chinese man for a husband and their fruit of love is on the way. Before this may be unacceptable in a strict Chinese culture but today to save the face of the Chinese woman and avoid producing an illigitimate relationship and child, the Chinese parents will have to forego the dictates of the tradition just to be able to save their daughter and spare her from having unwanted life ahead.

In return, the daughter who married a foreigner and broke the practice will exert all her effort to have her marriage work just to be able to bring back and give a redeeming face for her family. Gender Roles Gender differences and conflicts if to be applied to movie roles or characters will have variations in treatment and style. The movie centered on women roles because of the flexibility of the character and personality of women.

A male dominated film may be different because of the firmness of their personality in dealing in such plot and following their long adhered culture and which they are bound to protect and continue. 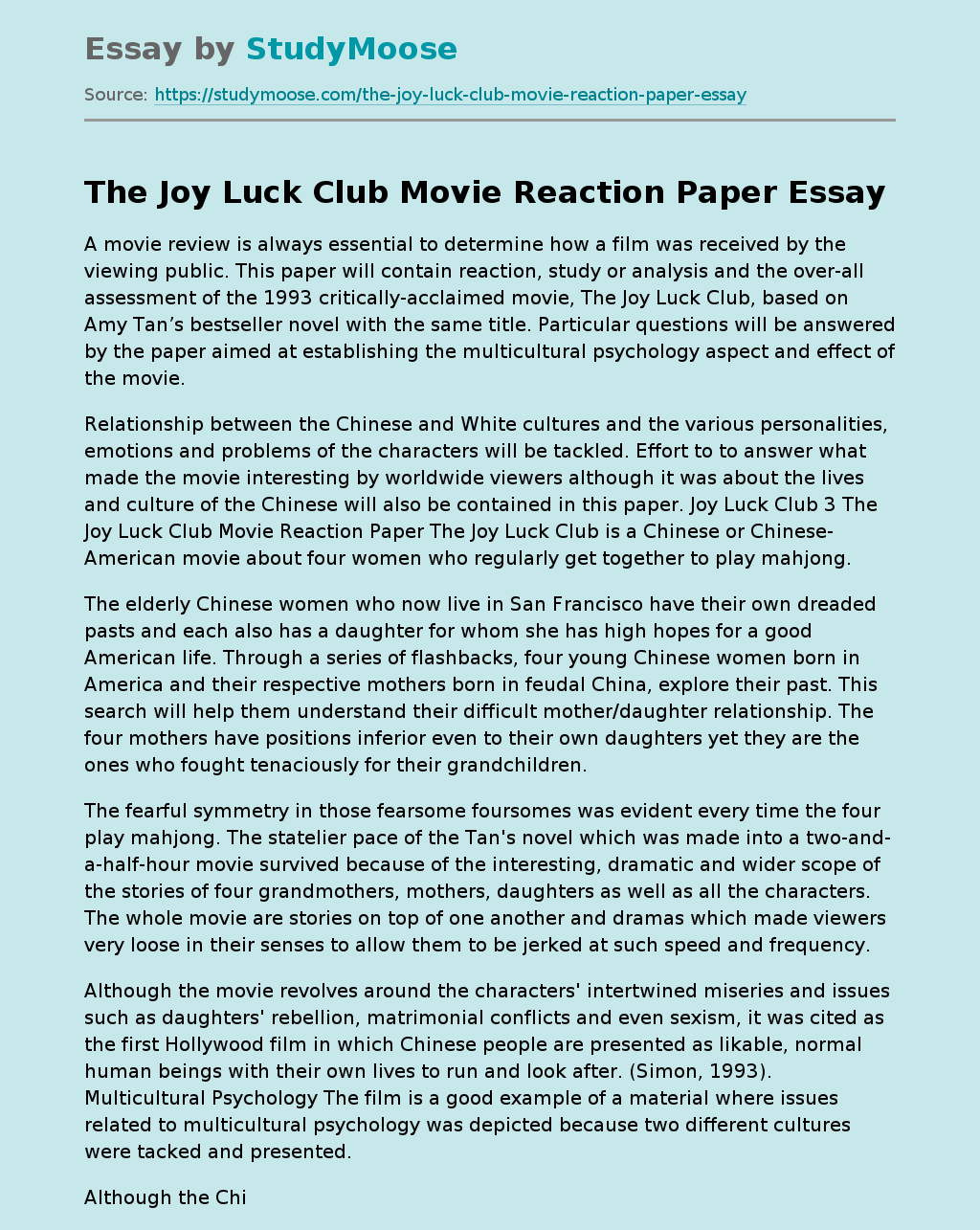