Joy Luck Club is one of the most heartfelt stories i have ever encountered since the movie the Color Purple. The elongated and explorative stories in Joy Luck Club have you loose and gain faith in humanity. The JLC (Joy Luck Club) starts off with the death of Suyuan Woo. Suyuan Woo a Chinese Born mother to three dies without going back to China and reuniting with her Two Children who were left because of Wartime stress and Dysentery.

Lindo Jong. Lindo at a young age was prepared at the age of 15 to live in a woman’s house, and fulfil a guarantee to have many children with a young boy.

Lindo was given up and sent to this house treated unfairly and like garbage until she made a scene that would change her life. Screaming that the ancestors forbid the marriage and made a baby in the maids belly she escaped her prison and got a rail ticket to Shanghai. Lindo Jongs daughter Waverly Jong chess champion had confidence like no other. Welding this power in chess she became a life magazine front cover.

Lindo basking in this glory flaunts her daughter as if she were in her daughters place. Lindo using Waverly as a showboat. Quitting chess because of it Waverly decrees it, but her mother takes no notice. Waverly after months decides to return to chess but does not make a successful comeback. Seeing the self inflicting burden she never played again. Marrying a Chinese man to please her mother she never did, having a baby then divorcing. After this Waverly dated Richard a white man. Lindo silently expressing doubts disapproves Richard.

16 year old Ying ying wooed by playboy Lin Xiao becomes pregnant with his child. Showing his true colors after the baby Lin Xiao because intimate with a opera singer and many other women destroying his domestic relationship with Ying ying. Ying ying Traumatized by the age of 16 drowns her baby because of overwhelming sorrow. Moving to America she was terminally Traumatized by the death if her baby effecting her second child, Lena. Lena with no sense of drive repeats her mothers mistake of having no backbone and no spirit. Living in a emotionally draining household and married to a man who anally splits everything she has an intervention. In a late night arguement Lena argues what there marriage is truly based on. Ying ying spotting the same signs of her relationship initiates the separation. As she calls “hiding in the trees and cutting her spirit loose”.

An mei burned from a bowl of soup has never known her mother, accused of breaking vows. One day her mother returned to do the most honorable sacrifice. An meis grandma dying drinks her daughters blood in order to heal her terminal sickness. An mei witnessing her mother for the first time loses her grandmother, Only the most dutiful daughter cut there flesh for their dying mother to save her life. Decided to move with her mother An Mei leaves her aunts and uncle. Rose An Meis daughter like her mother doesn’t know her worth. Meeting her new boyfriends parents Rose is confronted with racial derogatory language from the mother. Ted confronting the problem shows how much he loves her.

Ted and Rose get married and buy a house. The weight of marriage sinks in to Rose and in a desperate unintentional measure Rose can’t stand up for herself nor have an opinion. Having self worth issues it drags the marriage down to the ground nearing divorce An Mei tells the story of heartbreak and the reason her mother was treated as garbage. 8-9 year old An Mei learns her mother was raped by Wu Tsing (pimp) and kept hostage holding his child, not able to go anywhere or do anything. The child ultimately was stolen from her and 1st wife owns him. Surprised of this An mei’s mother kills herself and flies through the pearly gates of overdose with the strategic role of helping her daughter An mei and her son. Flying through the Pearly gates with the biggest F*cking vengeance chip An Mei wreaks havoc on those who have done wrong to her and her brother. F*cking everything up she gets the respect her and her brother deserve and the first wife backs off for good. 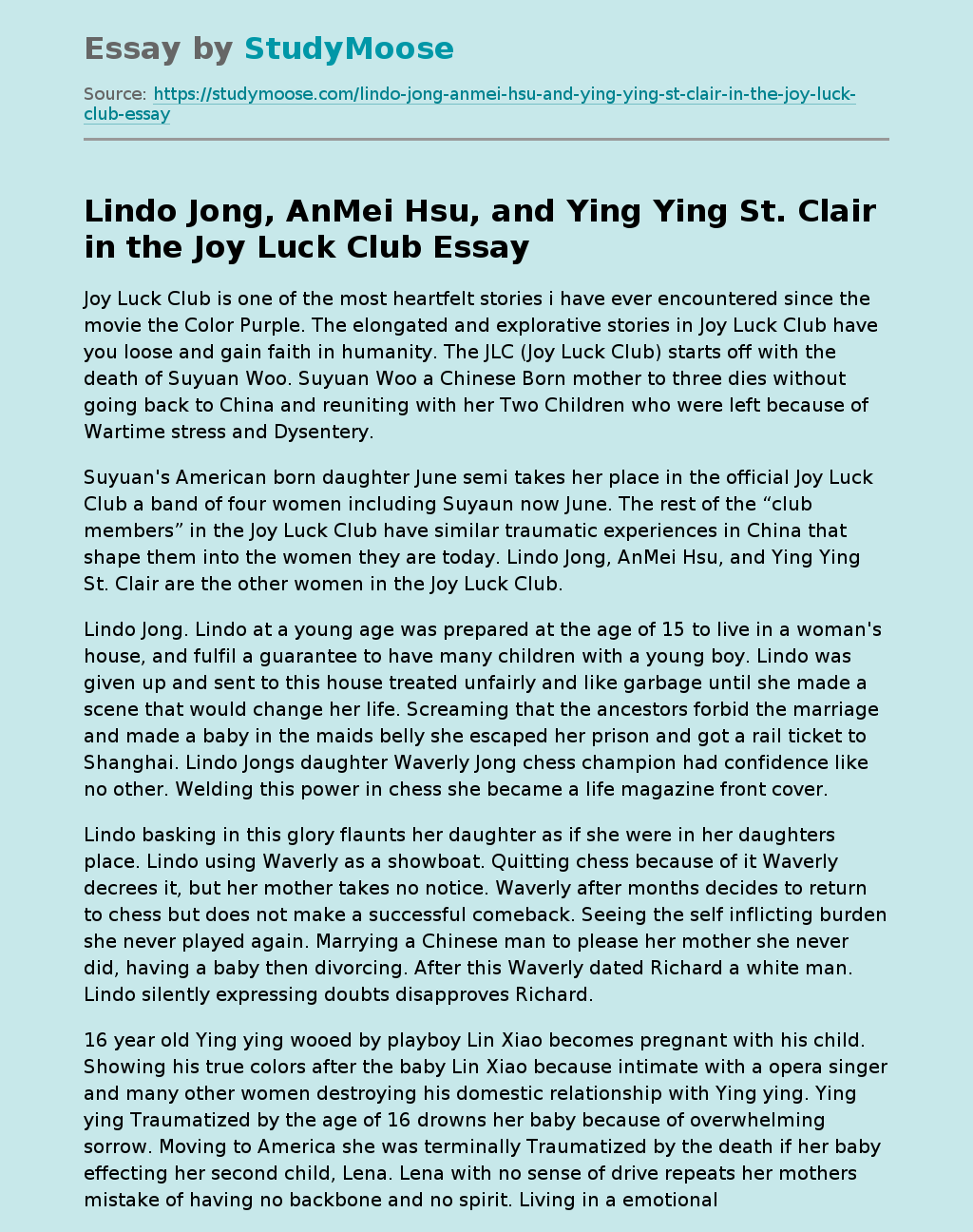