How Penicillin Changed the World Essay

Life before September 1928 proved to be a difficult time for many. The quality of life across the world was poor, and humans had a considerably shorter lifespan than today. Bacterial infections ranked as a leading cause of death. These infections spread easily, and diseases such as pneumonia, syphilis, gonorrhea, diphtheria, and scarlet fever as well as wounds and childbirth infections killed thousands every year. Surgical infections were also a major killer, and doctors had no protection from any of these infections.

Don't use plagiarized sources.
Get Your Custom Essay on How Penicillin Changed the World Just from $13,9/Page

The discovery of the first antibiotic, penicillin, in 1928 changed the lives of people forever. Penicillin provided a cure for many deadly infections, and its discovery led to the discovery of many other antibiotics, such as streptomycin, which are used to treat everyday infections for countless ailments, saving and improving lives throughout the world. Before the discovery of penicillin, medicine was not very reliable for curing diseases or infections. Many people in the late 1800’s- 1920s were dying from the common cold (Tames 12).

The Center for Disease Control and Prevention states,“Diseases such as pneumonia, tuberculosis (TB), and diarrhea and enteritis, which (together with diphtheria) caused one third of all deaths in the late 1800’s to early 1900’s”. 1918 proved to be an especially devastating time with 20 million lives lost due to a wide spread of influenza that no known medication could cure.

During this time vaccinations were the most helpful medication but even with their help, thousands still died from many diseases and infection (CDC). The discovery of penicillin is described as being miraculous. Penicillin is responsible for curing thousands of diseases and infections since the 1940’s. It saves hundreds of thousands of lives that would otherwise be lost due to these infections. Treating everything from cuts and scrapes to major diseases such as syphilis, penicillin is used for just about everything in today’s world (Wong). Wong stated, “Without the discovery of this antibiotic thousands of people would still be dying from the same diseases that killed hundreds of years ago”. Despite the success of the drug, penicillin, discovered by Dr. Alexander Fleming, was an accidental finding. Fogel commented in his article, “Fleming was known as being an unorganized and messy scientist”. He was researching a culture of staphylococcus aureus, a pathogenic bacteria, and left for a two week vacation. When he returned he observed that the specimen was contaminated by a species of penicillium and the penicillium prohibited the growth of the staphylococcus aureus (Wong).

Fleming decided to further his research and discovered that this mold was capable of killing a wide range of harmful bacteria. He published his findings in the British Journal of Experimental Pathology, where other scientists observed them and decided to turn penicillin into something more than just a laboratory finding (“Discovery and Development of Penicillin”). In the early days of penicillin production, only small amounts of the drug were produced, which caused major issues for doctors and surgeons testing the antibiotic. Once penicillin was developed enough for testing, it became high in demand. Producers of the drug could only fermentate small amounts at a time, growing the penicillium bacteria in bedpans, milk churns, and food tins (“Discovery and Development of Penicillin”).

Endocrine Today states, “It took seven months to grow enough of the bacteria to cure 6 patients”. This caused many issues for doctors and surgeons testing the drug, since they couldn’t complete their trials with the limited resource. Many patients who received penicillin died from relapse of diseases since doctors did not have the amount of the drug needed to completely eradicate the disease. It wasn’t until the late 1930’s that increased production of the drug occurred with the development of customized fermentation tanks that would allow 500 liters of penicillin to be produced per week (“Penicillin: An Accidental Discovery Changed the Course of Medicine”).

Although penicillin was limited in resource, tests on the new drug proved to be successful. Performing the first test with penicillin were Howard Florey and Ernst Chain, who injected 50 mice first with harmful Streptococci then with penicillin. The test proved to be successful in eradicating the disease from the mice. According to Tames, “The first human test of penicillin was Albert Alexander, a 43 year old police officer that suffered a small cut from a rose thorn that turned into a life-threatening infection with huge abscesses affecting his eyes, face, and lungs” (24). Alexander was injected with penicillin and within days he made a miraculous recovery. Unfortunately, the limited amount of penicillin ran out, and he died three days later. Another test was performed on a four year old boy with a fatal infection, and he was cured completely. Scientists who worked for major pharmaceutical companies wanted to purify the drug even more for widespread use all over the world (“Discovery and Development of Penicillin”).

Accordingly, penicillin’s use in World War II decreased the amount of soldier deaths that were the result of diseases and infections. In World War I, 200,000 soldiers died from disease and infection. The Center for Disease Control states, “The most common diseases for both world wars were pneumonia ,strep throat, scarlet fever, diphtheria, syphilis, gonorrhea, meningitis, tonsillitis,and rheumatic fever”. With the help of penicillin, in World War II the number of soldier casualties dropped significantly to around 9000. Death rate from pneumonia was 18% in WWI; and in WWII it was less than 1% (“Penicillin the Wonder Drug”).

In addition to its benefits in World War II, penicillin also dropped the death rate from amputation. Amputations were extremely risky in the late 1800s to early 1900’s because of the inadequacy of medication and sanitation in hospitals. Thousands of soldiers came home from the war needing amputations from sustained injuries. Tames states, “Before the induction of penicillin 75% of amputations resulted in death” (45). Penicillin’s use in these procedures reduced that number to 30% (68). Antibiotics made it safe to operate on limbs without the fear of infection for thousands of people. Furthermore, the discovery of penicillin paved the way to the discovery of other antibiotics. Penicillins success inspired many scientists and pharmacists to research other products that could be helpful in medicine. Many scientists tested bacterias and natural fruits for harmful bacteria fighting properties (“The fungus that changed history”).

Endocrine Today states, “A number of pharmaceutical industries began to screen other natural products for antibacterial activity, which led to new antibiotics such as aminoglycosides and tetracycline” (“Penicillin: An Accidental Discovery Changed the Course of History”). These new antibiotics, just like penicillin, were successful in the treatment and eradication of many infections and diseases. As a result from the discovery of new antibiotics along with penicillin, many diseases and infections that killed thousands finally had a cure. Krebs states in his article, “Before penicillin, tuberculosis, scarlet fever, diphtheria, syphilis, anthrax, strep, and staph often resulted in death”. Doctors and surgeons didn’t have the medication to cure many of the diseases that were major killers at the time. With the discovery and induction of penicillin, most if not all those diseases and infections are now curable (“The Fungus that Changed History”).

Today, less than 10% of the worlds population die from the same diseases that killed in the late 1800’s-early 1900’s (Wong). Subsequently, penicillin is still as popular as it was in the 1930’s, despite the growing number of allergies and antibiotic resistance against it. The overuse and misuse of penicillin has caused many to develop antibacterial resistance against the drug. Allergies caused by penicillin are the most common of all drug allergies. Some scientists claim that penicillin allergies are caused by a person’s immune system genetic makeup that is designed to fight all bacteria. Despite this, “Penicillin is the most widely used antibiotic in the world”, and it continues to be effective in curing deadly diseases (“Penicillin: An Accidental Discovery Changed the Course of Medicine”).

Penicillin has changed the world in an extremely positive way. It has provided the means for treating and curing deadly diseases and infections, as well as lead to the discovery of other disease killing antibiotics. Millions of lives have been saved and improved a result of this discovery. Without the “mistake” Alexander Fleming supposedly made the world would still be one with meager medical treatments; and thousands would still be dying from the fatal diseases that took so many lives in the 1800’s. Penicillin has truly fabricated the world of medicine into what it is today.

How Penicillin Changed the World. (2016, Mar 16). Retrieved from https://studymoose.com/how-penicillin-changed-the-world-essay 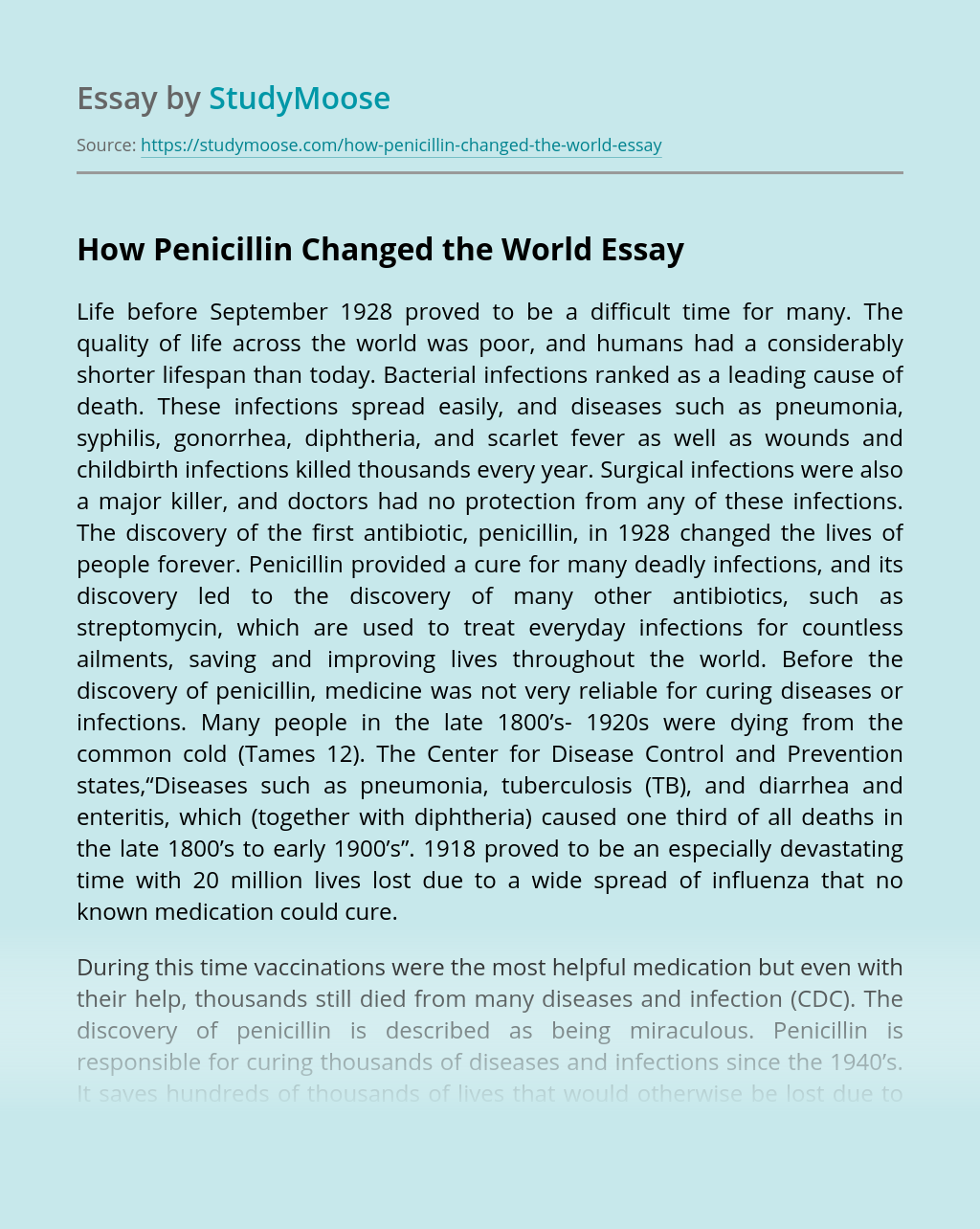 The aspects of community and aggregate are closely connected and people tend to use the terms interchangeably. The best way to explain the difference between the two concepts is by examples to differentiate and get a clearer understanding of the difference between the two concepts. This paper will define aggregate and community giving a brief... VIEW ESSAY

‘Phlebotomy’ comes from the Greek word phlebos, meaning veins, and tome, meaning incision. Bloodletting is one of the humanity’s oldest medical practices, dating back thousands of years and is linked to many ancient cultures, including the Mayans, Aztecs, Egyptians and Mesopotamians. Evidence suggests bloodletting for therapeutic reasons may have begun in Egypt around 1400B.C. Tomb... VIEW ESSAY

View sample
Get Essay
Should Physician Assisted Suicide be legal?

When we think about the idea of physician- assisted suicide, we most likely feel as though that the act itself should be considered murder. During 1997, The President at the time Bill Clinton signed into regulations “The assisted suicide funding restriction act”. The regulation omitted the use of federal monies to pay for physician assisted... VIEW ESSAY

Health care has come a long way in technology for the past, implementing new technology has made the health care industry grow in size. Major events of health care have paved the way for future technologies influence the physicians, administrators, clinicians, and staff to push pass the old ways of thinking and create new initiatives... VIEW ESSAY