Importance Of Oil And How It Has Changed World Politics

In the modern civilization, oil has excellent significance. However, lots of people do rule out oil to be of great significance due to the fact that they only associate it with the diesel or the gas that they use for transportation purposes. According to Yergin (Yergin, p 17), the world is addicted to oil. Due to the oil’s essential function in all countries all over the world particularly in the industrialized nations, there is need for nations to give attention to the global oil market.

Turn in your highest-quality paper
Get a qualified writer to help you with
“ Importance Of Oil And How It Has Changed World Politics ”
Get high-quality paper
NEW! AI matching with writer

Among the most essential functions of oil is its contribution to the global economic advancement. One of the ways through which oil causes financial development is its usage in offering energy for different kinds of transportation such as planes, cars and trains. The contemporary civilization is constructed on oil. In practically all countries all over the world, the transport system accounts for more than 50 per cent of oil consumption.

The transport sector due to its high dependence on oil is approximated to contribute to the world’s 90 per cent increase in carbon emissions in EU by 2010.

Advancement and technological improvement increases the need for oil in the transportation sector. According to Chomat (Chomat, p 10) depends heavily in oil.

Engdahl (Engdahl, p 23) asserts that in Europe and the United States, oil and oil-derived products in the transport industry account for about one third of the total amount of energy consumed in the world.  In India, China, and other developing nations in Asia, the economic prosperity and technological advancement has led to an increase in demand for oil in the transport sector as more trains, vehicles, and planes are being produced.  In America, the enormous fleet of vehicles, trains, and planes depend on oil for 97 per cent for fuel.  For countries that have oil reserves, oil that is used in the transport industry is much cheaper.

Research conducted on the members of the organization for Economic Cooperation and Development (OECD) indicated that the transport sector accounts for an increase in demand for oil.    Due to the high demand for oil, world oil prices keep on increasing, making bio-fuel, solar energy and nuclear energy to become  alternative sources of energy.

Apart from being used as fuel in the transport sector, oil provides energy in the operation of machines in the industries, factories, and production plants. Kenneth (Kenneth, p 36) asserts that in the industrial and domestic buildings, oil is used for heating hence making oil one of the most commonly used products at home and in industries.

In the industrial sector, natural gas produced from oil has become a primary energy source.  This sector has maintained the lead in the consumption of natural gas and it is estimated that by 2030, the industrial sector will account for 43 per cent of the projected use of natural gas. The gas has become an attractive choice for the power generating plants due to its low carbon dioxide intensity as well as its relative fuel efficiency.  It is projected that by 2030, 35 per cent of world’s consumption of natural gas will be accounted for by the electricity generation plants.

The developing countries consume half of the world’s production of kerosene which is used for lighting and for cooking. In the developed nations such as the United States and the European nations, kerosene is used as jet fuel.

Industries and factories that produce plastics and paints use oil as a raw material.  Industries in the modern economies rely heavily on oil to produce commodities and natural gas which is produced from oil fields is a major raw material in fertilizer production.  Examples of nations that produce fertilizers from natural gas are Saudi Arabia which is currently one of the world’s largest oil producers. Yergin (Yergin, p 12) asserts that oil is very important in the production of food all over the world because it supports agricultural production activities.

Oil that is derived from petroleum is used for heating, powering the combustion engines, and lighting.  When it comes to heating purposes, the high boiling point of the oil is good for cooling systems and the non-polarity quality of oil makes it very significant for lubrication for various engineering purposes.

This is one reason why oil is very important in industries where machines are used for production.  The high demand for paints has been increasing over the years as modernization result to construction of buildings in urban and rural areas.  Since the 15th century, oil has been used in paint production because color pigments in paints can be suspended in oil.    As industries grow while others are newly established, demand for oil will continue to increase.

How oil has changed world politics

The use of oil in all aspects of life in the modern civilization demands that countries have easy access to the resource.  In addition, accessing oil at a cheaper price has become a critical factor for countries.  The desire by nations to attain economic prosperity and financial independence influences the diplomatic and economic relations between nations. A good example of how oil has shaped the world politics is the relationship between the West and Middle East.  Currently, Middle East region accounts for the largest world oil production. Saudi Arabia which exports oil has established diplomatic ties with the US and European nations.

The great economic benefits that oil brought to Saudi Arabia led to good diplomatic relations between the kingdom and the United States.  Although the US had earlier shown little interest in Middle East political matters due to its isolationist policies, its relations with Saudi Arabia has made the US to be greatly involved in political matters in the region.

In addition, the good relations between America and Saudi Arabia assisted the US to deploy its troops during the cold war.  The US through its troops in Saudi Arabia helped it to contain the Soviet Union and eventually, the United States managed to gain political influence in the Gulf region at the expense of Britain.  The Saudi oil reserves have for a long time given America security in relation to oil. This has enabled the US maintain its political influence as a superpower. Through the diplomatic ties between Saudi Arabia and the United States, America has managed to influence the political agenda of nations such as Russia.  Just like the United States, Saudi Arabia does not support communism that is promoted by the Soviet Union.

For nations to achieve economic prosperity, oil is a very critical commodity. Matthew (Matthew, p 52) states that competition for economic and political power between nations has resulted to competition for oil.  For the nations, the security of oil supplies has become an issue of concern which has in turn made the major oil producing countries which are members to the OPEC play a critical role in the security of oil supplies.

It is estimated that 40 percent of oil demand in the world is met by oil supplies from OPEC countries because the countries account for 75 percent of world oil reserves.  This has compelled oil exporting nations to develop good relations with the oil producing countries.  The need to ensure that in future a country will have security of oil supplies has made countries to compete for the available oil resources. This has led to political conflicts as nations compete for the oil reserves.

The World War II had a great impact on political relations between nations that belonged to the Allies and the Axis alliances. The war encouraged diplomatic relations between nations while it increased hostility between others. According to Miller (Miller, p, 13), the Allied forces during the war recognized the importance of oil in the war hence it tried to drain the Axis oil reserves.

The Oil Campaign of World War II had Allied forces bomb the oil facilities that supplied the Nazi Germany with oil. The Allies and the Axis got involved into a military conflict due to differences in political ideology and need to have power. One of the factors that currently guarantee a nation’s of its power over other nations is oil security. To maintain power and oil security, the Allied nations formed the United Nations which up to date allows the nations to promote the achievement of their political agenda.

This is considered to be the reason why the US is determined to end the Taliban regime in Afghanistan. The US “War on Terror” promotes the US war in Afghanistan which has triggered political debates and shaped political relations all over world .Another issue that Wright (Wright, p 18) points out about the US political interest in Middle East is that the US invasion in Iraq was influenced by America’s quest for oil.

Various national oil companies compete for the strategic oil resources.  For example, development in Asian nations such as Japan and China has made the competition for the oil between oil companies to be stiff. The companies have been experiencing increased competition for oil in Eurasia and Middle East .In the past, the Chinese Sinopec and ENPC, India’s IOC and Russia’s Lukiol have been competing for oil resources in Iraq, Saudi Arabia and Kuwait.  The oil deals made between the national oil companies and oil producing countries has encouraged good diplomatic relations between nations. Consequently, this makes the nations promote political agenda that does not affect the business deals.

This reluctance has continued play a role in the political relation between Russia and the nations it considers to be a threat.  Roger (Roger, p 52) confirms that when nations establish trade deals that aim at ensuring that a country has access to adequate oil, good relations makes the countries offer each other political support when the need to do so arises.  Due to the benefits the country derive from each other, the countries tend to support similar political interests.  For instance, a nation offers its political support to another country to guard itself from economic loss if the country it depends on for oil has its oil reserves affected.

The Organization of Oil Exporting Countries (OPEC) for example has its member countries protect each others’ political agenda as long as it is for the good interest of the organization.  The mission of this intergovernmental organization is to ensure stability of oil markets, unify the member countries petroleum policies and ensuring regular supply of petroleum in the market.

In addition, the organization commitment to ensure that those who invest in the petroleum industry get  financial returns and that oil producers get a steady income has made it necessary for its members to support political agenda that benefits the member states.  The member states which include United Arab Emirates, Ecuador, Algeria, Angola, Libya, Venezuela, Saudi Arabia, Qatar, Iraq, Nigeria and Iran through oil have managed influence global oil prices.  The internal politics of these nations affect the OPEC production quotas which in turn influence political interests of other nations which export oil.

Importance Of Oil And How It Has Changed World Politics. (2016, Sep 26). Retrieved from https://studymoose.com/importance-of-oil-and-how-it-has-changed-world-politics-essay 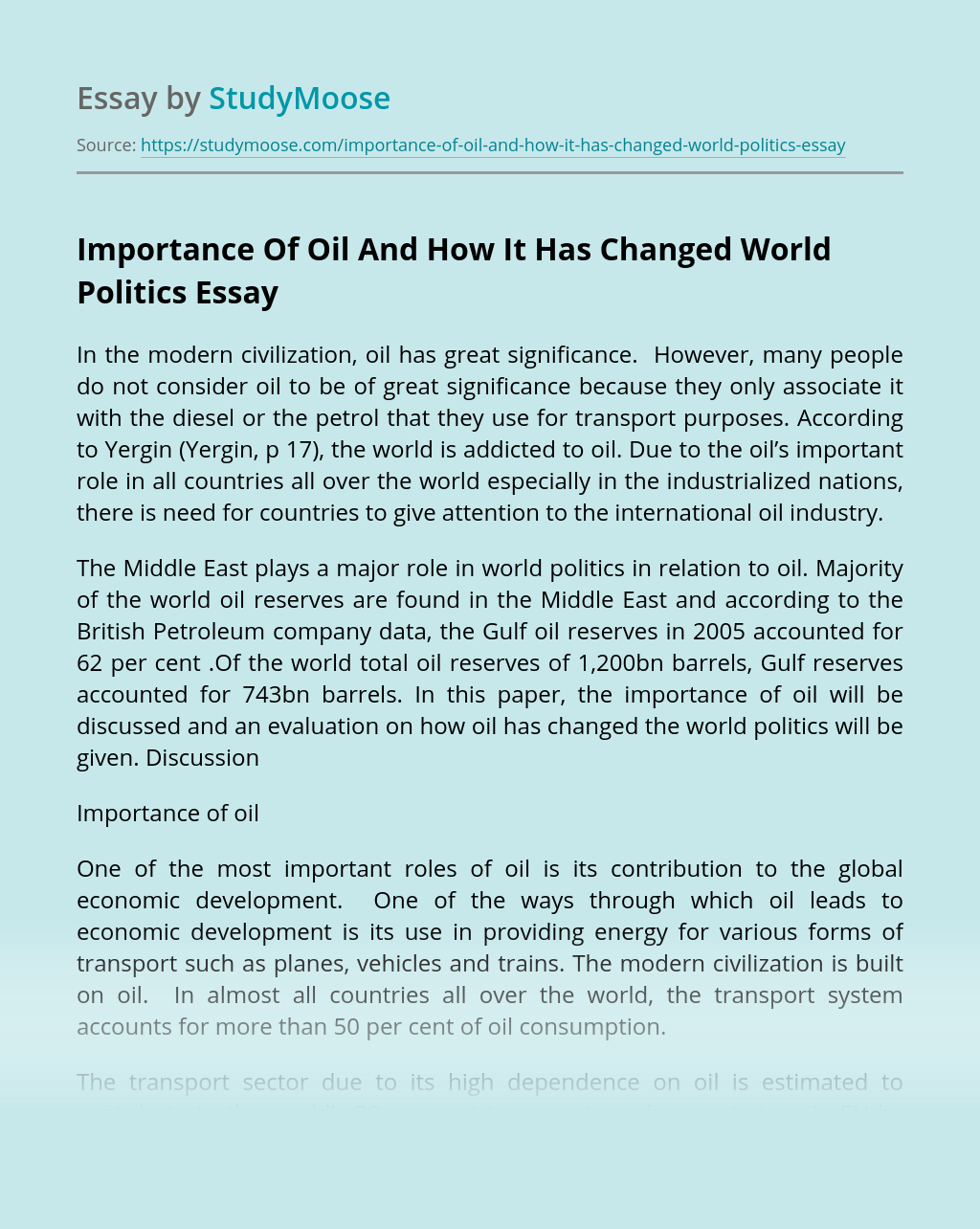 Turn in your highest-quality paper
Get a qualified writer to help you with
“ Importance Of Oil And How It Has Changed World Politics ”
Get high-quality paper
Helping students since 2015
Stay Safe, Stay Original