Marriage and How It Has Changed

Marriage has gone through profound changes over the last five decades, but we continue to speak about it as though it’s the same old familiar pattern. To see how much has changed; I am going to look at the shift from the forties, to the sixties, to today. In 1968, less than a year after the famous Summer of Love, as they used to say out in the country, “The times they were a-changing.” The sexual revolution, Viet Nam, drugs–the youth of the day were convinced the world would never be the same again.

Don't use plagiarized sources. Get your custom essay on
“ Marriage and How It Has Changed ”
Get custom paper
NEW! smart matching with writer

Yet they didn’t think about how such changes would affect marriage. It seemed as if they thought it would be about the same as it had been for their parents, except better because they (like most youth of most times) thought they were better than their gray and jaded parents that represented the “American Gothic” portrayed that day.

No matter how you describe it, it was a powerfully attractive vision.

The average age at which Americans got married dropped drastically, to just 19 for women. The number of children soared higher than it had for decades, to a peak of 3.7 children per woman in 1957. The goal back then was domesticity, and both partners worked for it–one to earn the pay, the other to make the home. If a man was a good provider, if he didn’t drink or beat his wife, if he was a “good father” to his children, he was a good husband.

A good wife had to be a decent cook and housekeeper, take care of the children and provide emotional support to her husband. Polls taken during that time show that more than 90 percent of people could not imagine an unmarried person being happy. When asked what they thought they had given up for marriage and family, most women said, “Nothing.”

Since the fifties, we’ve chased personal happiness, career and self-fulfillment and assumed that marriage and family would somehow fit in. One sign of this shift is the percentage of couples who say they would stay together “for the sake of the children,” which sank from about 50 to 20 between 1962 and 1977. We’ve lost something else, something far more surprising: the pure sexual drama of marriage. In Goin’ to the Chapel: Dreams of Love, Realities of Marriage, Charlotte Mayerson describes some startling discoveries about the Ozzie and Harriet generation. While talking in-depth to 100 middle-class women of all ages about their marriages, she found that those who enjoyed a passionate sexual relationship with their husbands were almost certain to have come of age in the fifties. In contrast, sex just wasn’t that important for younger women.

“Time and time again, the younger women say, ‘On a scale of one to ten, sex, I would say, gets a three,'” Mayerson writes. “These younger women had plenty of sexual relationships before they married, and the thrill was gone before the wedding day. For many older women, however, the excitement of sex had been a reason to marry, and the passion remained.” Those “Ozzie and Harriet” marriages, Mayerson suggests, could be considerably more passionate than those that have come since the Sexual Revolution. Baby boomers didn’t rebel against domesticity, they just took it for granted. Marriage wasn’t a treasure for which they worked and sacrificed, they thought of it as an adventure that happened because you fell in love; and it competed with other adventures–sex, travel, success, saving the planet.

Today, the fifties serve as an ideological battleground. For conservatives who regret the changes that have come, those years are a reminder of the good old days. For liberals who push society to escape oppressive patriarchal arrangements, they are a dreaded Dark Ages. Their constant cry is, “We can’t go back to the fifties!” Indeed, we can’t. But we would do well to recognize what we’ve lost and might regain. We’ve lost the emphasis on marriage and children that provided so much stability. Back then, a man’s career was to provide for the family, not his ego; a woman’s ambitions were put on the shelf if they conflicted with the children’s needs. That was certainly restrictive to some, but it created a strong social fabric. Since the fifties, we’ve chased personal happiness, career and self-fulfillment and assumed that marriage and family would somehow fit in.

The situation is hardly hopeless. After all, if something like half of all marriages ends in divorce, that means the other half don’t. We can’t guarantee that our children will succeed, but we can certainly prepare them and support them to be numbered among the successful. For previous generations, marriage was an inevitable destination. It didn’t take any special intention; it was a stage in life. For the ’00 generation, marriage will have to be a much more intentional act. They need encouragement, they need mentors, and most of all they need straight talk. We must ask them: “Do you know what you’re doing? Are you prepared to make this a success?” We often hear that if we do not learn from the past, we are bound to relive it. In my opinion, it is certainly something that wouldn’t hurt us a single bit in this particular situation.

Mayerson, Charlotte. Goin’ To the Chapel; Dreams of Love, Realities of

Marriage and How It Has Changed. (2016, Jun 21). Retrieved from http://studymoose.com/marriage-and-how-it-has-changed-essay 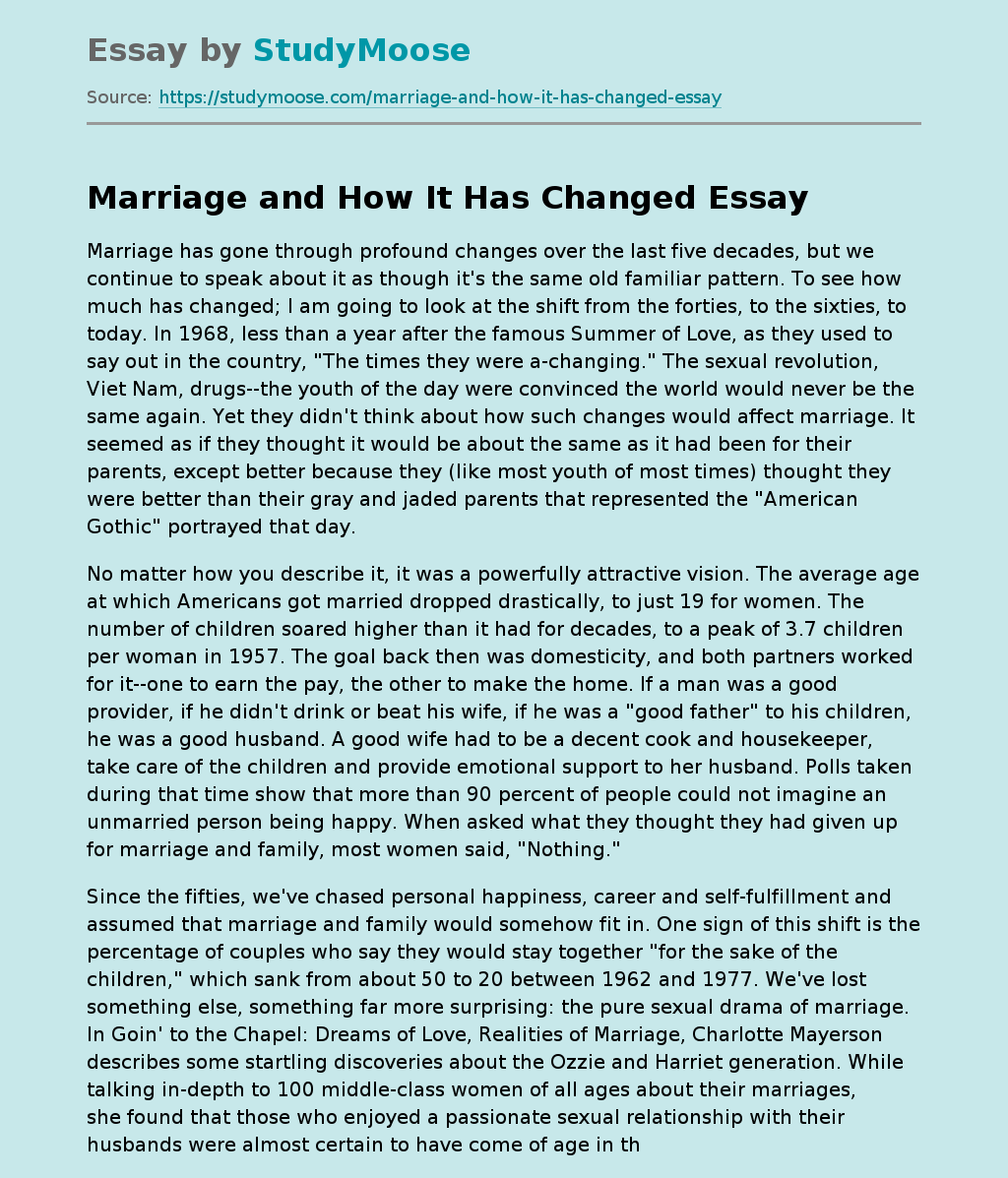