When you think of lions, you probably think of them being king of the savannah, right? However, it’s not easy being king. Over the past 50 years Africa’s lion population has plummeted from over 200,000 individuals back in the 1960′s to fewer than 25,000 today.

A shocking number if you consider the size of that continent, and by far the greatest number of remaining lion populations are small, scattered, and highly vulnerable. Ghana, Coted’Ivoire, and Congo are the latest African countries added to long list that have lost all their lions, and Nigeria, Kenya and Uganda predict local extinctions in the next ten years.

Turn in your highest-quality paper
Get a qualified writer to help you with
“ The African lion ”
Get high-quality paper
NEW! AI matching with writers

S. government is considering adding them to the list.

First of all, what is trophy hunting? Wikipedia defines “trophy hunting” as the selective hunting of wild game animals. Trophy hunting is most often criticized when it involves rare or endangered animals. Opponents may also see trophy hunting as an issue of morality or animal cruelty, criticizing the killing of living creatures for recreation. Approximately 600 lions are killed every year on trophy hunts, including lions in populations that are already declining from other threats.

These hunts are unsustainable and put more pressure on the species. Unfortunately, Americans are primarily to blame. Approximately 60 percent of all lions killed for sport in Africa are shipped to the U.S. as trophies.

There are several reasons why trophy hunting is so bad for lions, other than it kills healthy members of a jeopardized species. The adult male lion is the most sought-after trophy by wealthy foreign hunters. And when an adult male lion is killed, the decline of that lion’s pride can lead to more lion deaths as outside males compete to take over the pride. Once a new male is in the dominant position, he will often kill the cubs sired by the pride’s previous leader, resulting in the loss of an entire lion generation within the pride.

Trophy hunting is based on selectively taking the large, robust, and healthy males from a population for a hunter’s trophy room. These are the same crucial individuals that in a natural system would live long, full lives, protecting their mates and cubs and contributing their genes to future generations. Despite the wild claims that trophy hunting brings millions of dollars in revenue to local people in otherwise poor communities, there is no proof of this. Even pro-hunting organizations like the International Council for Game and Wildlife Conservation have reported that only 3 percent of revenue from trophy hunting ever makes it to the communities affected by hunting.

The money that does come into Africa from hunting is pale in comparison to the billions and billions generated from tourists who come just to watch wildlife. Even a new, much-hyped method of targeting aging lions, so that the animals are killed after contributing to the genetic pool, are difficult to pull off and rely on age verification after the lion has already been killed.

Although much habitat destruction can be attributed to human activity, it is not an exclusively man-made phenomenon. Habitat loss also occurs as a result of natural events such as floods, volcanic eruptions, earthquakes, and climate fluctuations. Habitat loss is probably the greatest threat to life on Earth. Animals are losing their homes because of the growing needs of humans.

Lions are coming into increasingly closer contact with humans, as their habitat is converted for human use, and livestock replaces their natural prey. This can fuel intense conflict situations where lions are speared, shot, or even poisoned. Dramatic loss and fragmentation of habitat is due to an ever-expanding agriculture frontier. This is confining lions to isolated islands of habitat, increasing their risk of extinction. People don’t realize that the savanna is in worse shape than the rain forests.

Using Google Maps, scientists from Duke University were able to zoom in on the African landscape and see what the other satellite images weren’t capturing: small fields and settlements fragmenting what used to be uninterrupted habitat. According to Dr. Pimm (head of the study), only about 25 percent of Africa’s savanna remains intact. Duke University compared maps of intact savanna with lion population data and statistics on human population density and distribution. Of the 67 lion areas the team identified, only 10 support lion populations that are large, stable and protected enough to persist into the foreseeable future. None of those areas are in West or Central Africa.

Finally, how can we save the African Lion? A simple and easy way to help is by signing an online petition, such as the one on this website: http://forcechange.com/6837/protect-the-african-lion-recognize-it-as-an-%E2%80%9Cendangered%E2%80%9D-species/. The petition is targeted to the members of the U.S. Fish and Wildlife Service to grant the African Lion the status of “Endangered” and allow it to be protected accordingly. Until these lions are recognized as “endangered” they will not be able to get the help that they need. There are also many other websites that you can sign a petition for protecting the African Lion.

In conclusion, the African Lion’s population has been decreasing drastically due to trophy hunting and habitat destruction. “Lions have slipped under the conservation radar for too long. If we do not act now, lions will find themselves in the same dire predicament as their Asian counterpart, the tiger. We need to tackle the problem at this level if we hope to ensure a future for Africa’s great cat.” -Dr. Guy Balme.

The African lion. (2017, May 21). Retrieved from http://studymoose.com/the-african-lion-essay 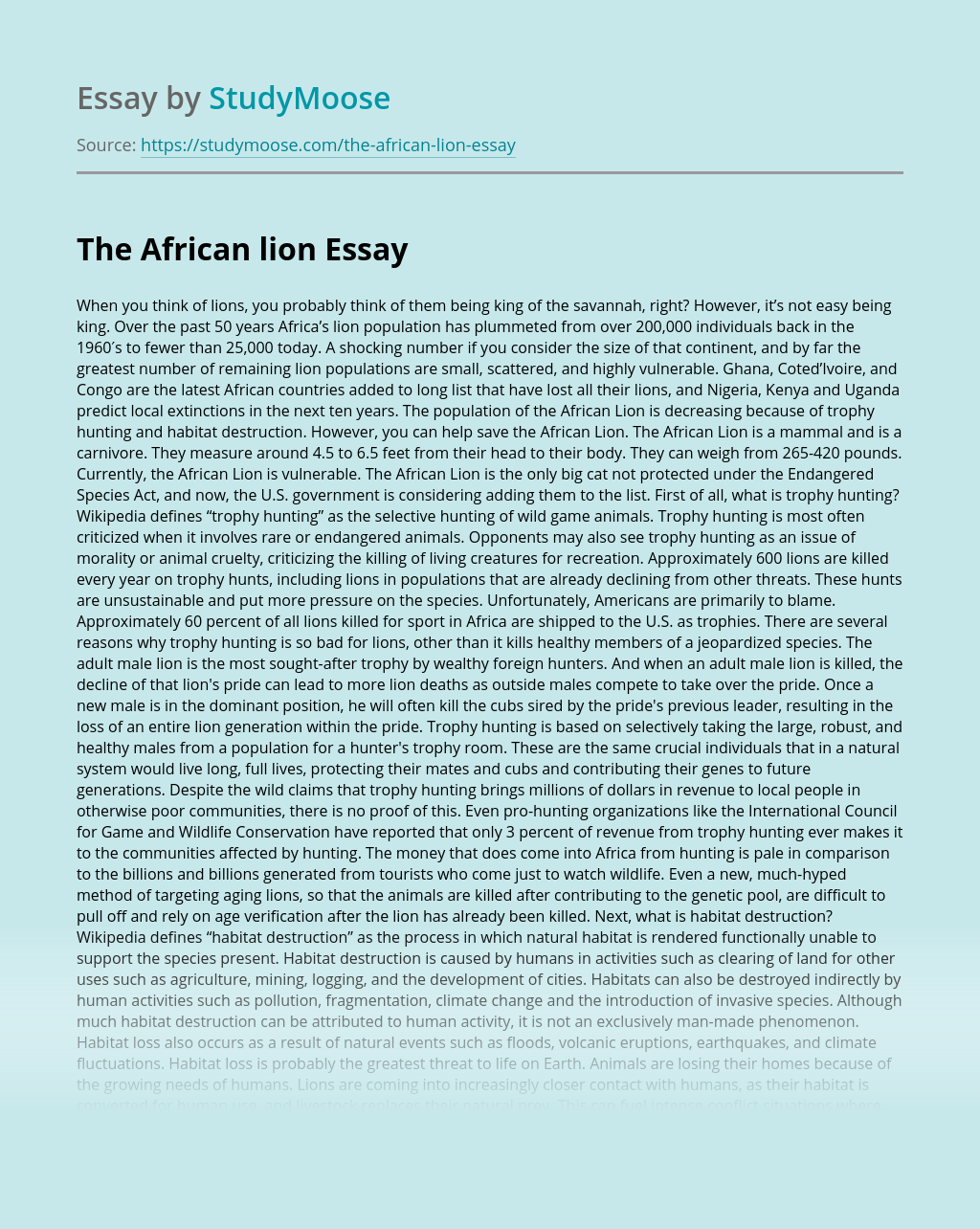 Turn in your highest-quality paper
Get a qualified writer to help you with
“ The African lion ”
Get high-quality paper
Helping students since 2015
Stay Safe, Stay Original