Still captivating people today, the story elements and classic plot of Hamlet, written by the influential William Shakespeare, have made it to the film screen in a version that the whole family can enjoy. The Lion King, one of Disney’s most legendary movies, illustrates aspects and characteristics of Shakespeare’s Hamlet, and captures it in a magical, enthusiastic style. More than just the unforgettable music and remarkable animations, The Lion King follows the popular plot, conflict, climax, and resolution that William Shakespeare scribbled on paper over 400 years ago.

Turn in your highest-quality paper
Get a qualified writer to help you with
“ Hamlet and Lion King Comparison ”
Get high-quality paper
NEW! AI matching with writer

However, all of Disney’s animation movies end with a happy ending, which means that movie writers of The Lion King had to change the story elements of Hamlet to better suit the movie for young audiences. Disney was overall primarily successful in delivering the dark, complex story plot of Hamlet in The Lion King by still preserving the optimism and purity of Disney movies, with only a few minor flaws.

The far-reaching influence Shakespeare’s Hamlet had on the movie The Lion King is evident through character comparisons, family conflict, and moral struggle within the characters.

Simba, who undergoes his fair share of hardships and worries, can be directly related to Hamlet. Both characters suffer the loss of their father and they both seek to be alone, running away from their responsibilities in the royal family. To escape the guilt of the death of his father, Simba runs away from all responsibility to forget about his past. Hamlet also runs away from his responsibility, with the thoughts of revenge and suicide overtaking his mind.

Both main characters have to reevaluate their morals as well; Hamlet decides whether it is moral or not to seek revenge on this uncle and Simba has to make the imperative decision of whether he should take control of the Pride Lands again. Hamlet’s father can be directly correlated to Mufasa, Simba’s father. Both kings ruled over their kingdom in peace and prosperity, with the intent of good ambitions.

Both kings also suffered a tragic death, due to the immorality and cruelty in their brothers. Scar and Claudius, characterized as Simba and Hamlet’s uncles, both used evil convictions to force their way onto the throne. Sarabi and Gertrude, the queens and mothers in both of the stories, care about their sons very much. They also have little to no power over their kingdom, leaving the uncles in full charge. When Simba returned to Pride Rock to declare his spot on the throne, he was furious when he saw how Scar was treating his mother, just like how Hamlet was furious about how Claudius didn’t treat his mother as good as his father once did. Nala can be related to the character Ophelia from Hamlet, mainly because Nala is Simba’s love interest, as Ophelia is to Hamlet. Disney did a very good job at preserving the main ideas and character significance of the original piece, without taking out anything important.

The Lion King placed a children’s perspective on a very gruesome story of responsibility and revenge. Disney was clever in adapting the story plot to a children’s audience. Most of the differences between the two works are because Disney had to change some of the stories conflicts to teach moral lessons and have more positive influences on the younger audience. Hamlet was written for an audience that is older and mature, and less vulnerable to the dreadful deaths and disturbing dialogues that Hamlet delivers. If a child ever saw the sinister plot and conflicts of Hamlet, they would be easily influenced to make bad decisions. The Lion King has a more encouraging, child-friendly essence to it, with positive songs and cheerful secondary characters that help lead to a happy ending. The Hamlet, however, has a very gloomy and depressing tone to it, with no foreshadowing of hope in the future. The ending of Hamlet ends in the terrible bloodshed of all the main characters, including Hamlet.

If this ending were to happen in The Lion King, it would not be suitable for children and it may even put some children into shock. It was a great idea that Disney decided to change the aspects of the story line that may influence child behavior, such as changing the horrible ending to a happy one, making Simba not contemplate suicide like Hamlet, and presenting the famous “Hakuna Matata” song, meaning “no worries.” When Simba ran away, he found a worry-free and happy life. This was changed from the original Hamlet plot to help children realize that problems can get better if they stop overthinking and worrying about them. The Hamlet version of this, if shown to little kids, would make them overthink their problems in life to the point of envisioning suicide or seeking vile revenge, just like Hamlet did. Disney did a perfect job at adjusting the story of Hamlet to the appropriate audience for The Lion King.

There were few minor flaws that Disney made in the remaking of Hamlet in The Lion King. In The Lion King, movie producers left out characters like Laertes and Polonius from Hamlet, and they weren’t very clear with the characterizations and placing of Horatio, Rosencrantz, and Guildenstern from Hamlet in The Lion King. Rosencrantz and Guildenstern could’ve been correlated to Simba’s friends Timon and Pumbaa, except for the fact that Simba’s friends didn’t betray him and spy on him for his uncle. Timon and Pumbaa could also be related to Horatio, but they weren’t Simba’s early childhood friends. The Lion King could’ve improved the movie by having Simba have a childhood friend to provide relief to the audience from the main focus of the story, and also by having Simba have two friends that spy on him for Scar to spice up the plot and conflict a bit more. Having characters similar to Laertes and Polonius in The Lion King would also spice up the plot and conflict more as well, because those additional characters would make it harder for Simba to reach his goal; in the end it would be worth it and show the audience that no matter how hard something is, they can get through it.

The only two obstacles that Simba had to go through were the weak hyenas and his uncle, Scar. Adding more antagonists to the story line would make the plot a little more interesting like Hamlet, considering he went through several obstacles to pursue revenge on his uncle. One other mistake that Disney made on The Lion King was that Simba didn’t mourn over the death of his father for a very long time, like Hamlet did. In the Hamlet, the death of his father affected Hamlet’s mind for the whole stretch of the play. Because of this, readers could tell that Hamlet loved and honored his father very much. Simba, however, forgot about this father and duties as king for many years when he ran away. Disney could’ve showed a better sense of companionship and love for family if they made Simba mourn a little longer over the death of his father.

To summarize our Hamlet and Lion King Comparison Essay, Disney’s movie, The Lion King, embodied the Shakespearian work of Hamlet in a way that it brought the story of Hamlet back to life, with modern day morals and important life lessons. Even though Hamlet was very evil with its dark schemes and dialogue, it taught the lesson that seeking revenge on someone will get that person nowhere; they must step up and be the better person. Simba stated clearly in the fight against his uncle that he wasn’t gonna kill his uncle because he wasn’t like him. In the end, fate ended up killing his uncle anyway and it wasn’t Simba’s fault, so the story of The Lion King didn’t end in a tragic way. Disney did a wonderful job at modernizing the enduring and classical themes and plot of Hamlet by making The Lion King a family-friendly movie. Throughout the plot, settings, characters and lessons, Disney proved to be very successful in rewriting the tale of Hamlet in the most optimistic and hopeful way possible, with very few flaws. 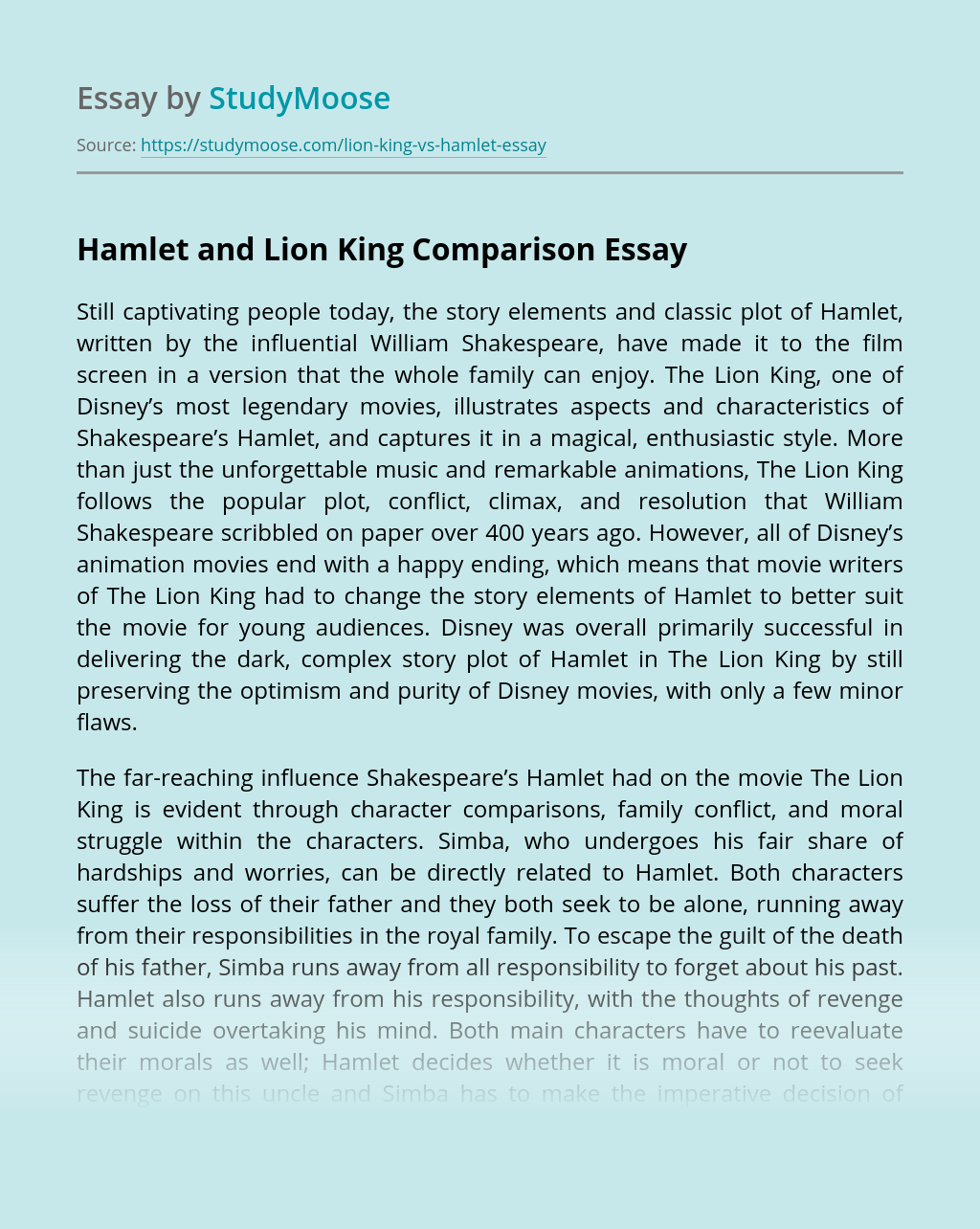 Turn in your highest-quality paper
Get a qualified writer to help you with
“ Hamlet and Lion King Comparison ”
Get high-quality paper
Helping students since 2015
Stay Safe, Stay Original