The lion and the Jewel Character Sketch and Background

Lakunle is the schoolteacher of the village.

He deeply admires Western culture and seeks to emulate, often to comically inadequate effect. He is portrayed by Soyinka as clumsy in both actions and words, throwing together phrases from the Bible and other Western works in hope of sounding intelligent. He is “in love” with Sidi, but has not married her because she demands that he pay the traditional bride price, something he refuses to do. Initially we chalk up this refusal to his Western beliefs, and the belief that women shouldn’t be bought and sold, but later in the play he reveals his true self – when Sidi’s virginity is taken away, he leaps at the chance to bypass the bride price by saying that she can’t really expect him to pay the bride price now that she’s no longer “pure”.

Don't use plagiarized sources. Get your custom essay on
“ The lion and the Jewel Character Sketch and Background ”
Get custom paper
NEW! smart matching with writer

He represents one extreme of the play’s central pendulum – the Western values.

Baroka is the leader of the village. He holds to his Yoruba traditional beliefs, but his power is coming under threat from the Western influence. The issue that troubles him throughout the beginning of the play, we learn, is his apparent impotence, a secret he reveals to his head wife. We later learn, however, that this feigned impotence was only a clever ruse in order to lure Sidi into coming to his palace. On the other hand, however, it is possible that he really was having a sexual “crisis” but this was resolved by Sidi’s visit; however the former option seems likelier.

Baroka represents the other extreme of the pendulum – traditional values.

Sidi is a young girl in the village who has just had her ego boosted by a visit from a big-city photographer, who took her pictures and published them in a magazine. From them on, she is extremely conceited, thinking herself even higher than the Bale.

The lion and the Jewel Character Sketch and Background. (2016, Mar 24). Retrieved from https://studymoose.com/the-lion-and-the-jewel-character-sketch-and-background-essay 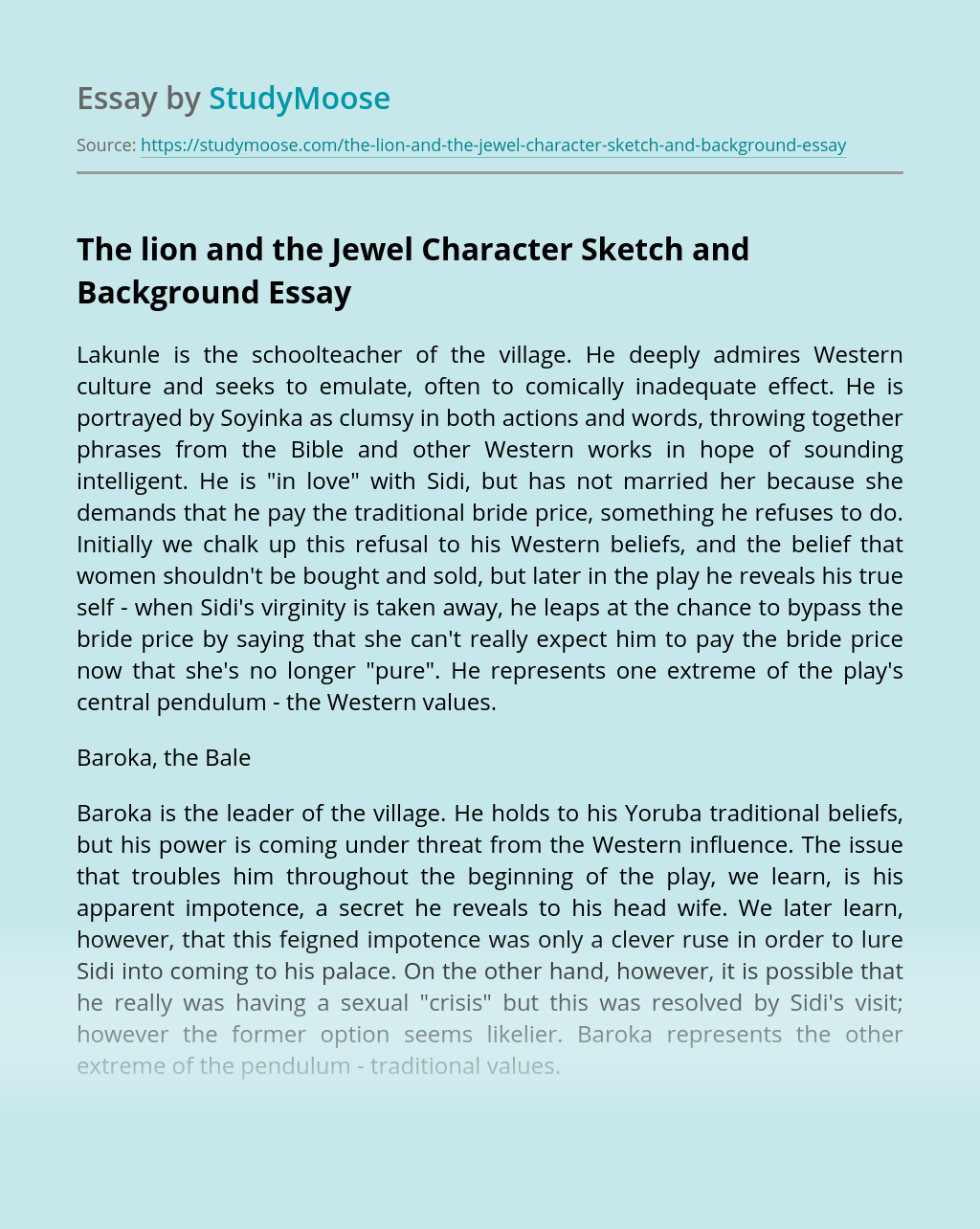