This assignment is based on Bessie Head’s classic novel, When Rain Clouds Gather. It gives an assessment of one of the novel’s main characters, Chief Matenge and in the process exposes him as an undoubtedly corrupt leader. This is supported by the many intertwined facts and quotations that portray his character as such a leader and these are selected and presented from the novel.

Byrne, Kalua, Scheepers and Kane (2012:100) provide the foundation for the reader’s agreement that Chief Matenge is a corrupt leader which in turn shapes the whole negative perspective of his personality when they describe him as representing the “Old Africa” at its worst – moral degeneration.

Going through the whole novel the reader struggles and eventually loses the battle in finding anywhere where any positive notions are associated with Chief Matenge. Bryne et al (2012:100) present Matenge as a “villain, a bad person who is openly corrupt”.

He is indubitably the antagonist and the opposer of Gilbert Balfour and Makhaya who generally stand for good in the name of progress and development in the novel.

Head (1987:18) introduces Chief Matenge as Paramount Chief Sekoto’s “troublesome and unpopular younger brother”. This already gives the reader an idea of what sort of personality Chief Matenge has. This description of him sets the tone in the whole novel as he is further described using such adjectives and phrases as “overwhelming avariciousness” and “unpleasant personality”, (Head 1987:18).

It soon becomes apparent that Chief Matenge’s brother, Paramount Chief Sekoto does not like his own brother, as the statement “nothing upset Chief Sekoto more than a visit from his brother, whom he had long classified as belonging to the insane part of mankind” (Head 1987:48) clearly displays.

Paramount Chief Sekoto is said to have always sided with villagers who his brother constantly upset. Head (1987:18) presents Matenge as having a “devil” that drove him and would subside after some chastising from Chief Sekoto only to awaken its “clamouring and howling” a few months later.

Matenge’s wickedness is further unfolded in the wish of Chief Sekoto to destroy him for “all the family feuds and intrigues he had instigated” (Head 1987:20). Ironically, Paramount Chief Sekoto was not what one would call a shining example of morality. Chief Sekoto, “although he was widely known as a good chief” (Head 1987:19) just like his brother Matenge “lived off the slave labour of the poor and his lands were ploughed free of charge by the poor, and he was washed, bathed and fed by the poor” (Head 1987:19). In turn Matenge also strongly despised his brother Paramount Chief Sekoto.

Head (1987:42) discloses this when she reveals his thoughts about his brother who he secretly thought was “an amicable, pleasant nitwit of a brother in the supreme position. Matenge coveted is brother’s position of Paramount Chief. Matenge is referred to as “evil” countless times in the novel. Dinorego further exposes this evilness or corruptness when he confides in Makhaya that he (Matenge) was the evil force delaying progress in the village. Dinorego reveals Matenge’s machinations to “damage” and “delay” the starting of the farm and the cattle co-operative which are projects that are supposed to push development in the village.

Matenge is said to have particularly sabotaged Gilbert Balfour on the cattle co-operative because he was personally benefitting from buying the poor villagers’ cattle at a low price and making huge profits by then selling them at a much higher price. Matenge took advantage of the poor villagers’ inability to hire railway trucks to transport their own cattle because they could not afford it. Matenge fought Gilbert Balfour’s cattle co-operative because it would put him out of business. Matenge’s falsehoods and cunningness are clearly portrayed when he lies to the villagers that Gilbert wanted to enslave them,

“Was it true they wanted to know, that Gilbert had secretly purchased land from the paramount Chief and was using the name co-operative to enslave the people? That was what Chief Matenge had told them” (Head 1987:35). The reader would not hesitate to label Matenge as greedy and selfish. Head (1987:41) reveals that Matenge lived alone (before Joas Tsepe joined him) in a “big cream-painted mansion”. The other villagers are said to have lived in small and primitive mud huts and were in fact not allowed to build brick houses without permission from the Chief which was rarely given, if at all.

Head (1987:41) goes on to mention that the central village where Matenge’s mansion was situated contained “one very poor general dealer’s shop which supplied the villagers with the “bare necessities” like sugar, tea and “cheap materials and shoes” among other items. The location of Matenge’s “big mansion” was also in proximity to a “three-roomed shack” which serves as the village primary school. The jarring contrast of Matenge’s seemingly luxurious life style and his surroundings nauseates the reader and speaks loudly of his greediness and selfishness.

The reader can safely accuse Matenge of being a tribalist. Byrne et al (1987:100) describe tribalism as the practice of advancing one’s own tribe above others and judging other people on the basis of their tribal origins. Matenge is described as a “die hard traditionalist” (Head 1987:42). He wanted things to remain the same. He is said to have understood tribalism and that it was “essentially the rule of the illiterate man who when he was in the majority, feared and despised anything that was not a part of the abysmal darkness in which he lived”.

(Head 1987:65) further portrays his disgust for other tribes when he is said to have dismissed Dinorego’s greeting at some point with a “slight gesture of the head which contained in it an inheritance of centuries of contempt for the ordinary man. ” His shaky and opportunistic relationship with Joas Tsepe is another revelation of Matenge’s lopsided and corrupt character. Joas Tsepe was also corrupt and this is revealed in the sponsor that was shrouded in mystery who supplied him with money which enabled him to remain unemployed and to travel every six months by air as a very important person. Matenge also has xenophobic tendencies.

His wish to chase Makhaya out of the village very much smelt of this. This is revealed when George Apple-by confides in Makhaya that Matenge wants him “removed” from the village because he is a refugee. Refugees were generally not liked in Botswana at the time of the book’s setting when many came from South Africa running away from Apartheid, but Matenge’s particular hatred for Makhaya as a refugee and all like him comes out when he referred to him as a “South African swine who always needs to run after his master” (Head 1987:66), referring to Makhaya’s close association with Gilbert Balfour.

To say Makhaya was thoroughly offended by this is an understatement for unbeknown to Matenge, he secretly formed thoughts of murdering him. In conclusion Head (1987:43) could not have summed up Chief Matenge’s character better when she described him as “the epitome of darkness with his long gloomy, melancholy, suspicious face and his ceaseless intrigues, bitter jealousy and hatred”.

Makhaya also equates him to several unsavoury items such as a “lout, cheat, dog and swine and he reckoned the “Matenges everywhere got themselves into a position over the poor” (Head 1987:136) The reader agrees with Mma Millipede when she quietly but unsuspectingly accurately predicts Chief Matenge’s demise. She tries to calm Makhaya after his dramatic encounter with Chief Matenge where he is labeled a South African swine and says, “People who err against human life like our Chief and the white man (referring to Apartheid in South Africa) do so only because they are more blind than others to the mystery of life.

Some time life will catch up with them and put them away for good or change them” (Head 169:137). In Chief Matenge’s case, he was unlucky to not suffer the later of these predictions, but the former. After he comes back from a rather long absence from the village, he immediately gets back to what he knows best and summons Pauline and six village elders to be tried. Unbeknown to him, the whole village was excited that the day had arrived that they would face their “persecutor of many years” (Head 169:184).

Because Matenge was not expecting a crowd, he panics, retreats into the house, and rather than facing the crowd, commits suicide, and the reader discovers another hidden character that was lurking in Matenge all along, cowardice. Not even his servants stand by him at his time of need; they beat a hasty retreat and leave him to deal with his issues alone and his eyes are opened and perhaps he finally sees himself for the monster that he is. The saddest part is not even his brother is quiet disappointed by his demise. Chief Sekoto’s digestion is said to have been “upset the whole day” by Matenge’s death, Head (1987:189).

The reader is sure it is not because he is grieving for his brother but he is unappreciative of the fuss and inconvenience that the death causes. Such is the fate of the antagonist of When rain clouds gather. The reader applauds Bessie Head on successfully creating a fitting villain who one cannot help but hate. SOURCES CONSULTED Byrne, D, Kalua, F & Scheepers, R. 2012. Foundations in English Literary Studies. Only study Guide for ENG1501. Pretoria: University of South Africa Head, B. 1987. When Rain Clouds Gather. Heinemann. 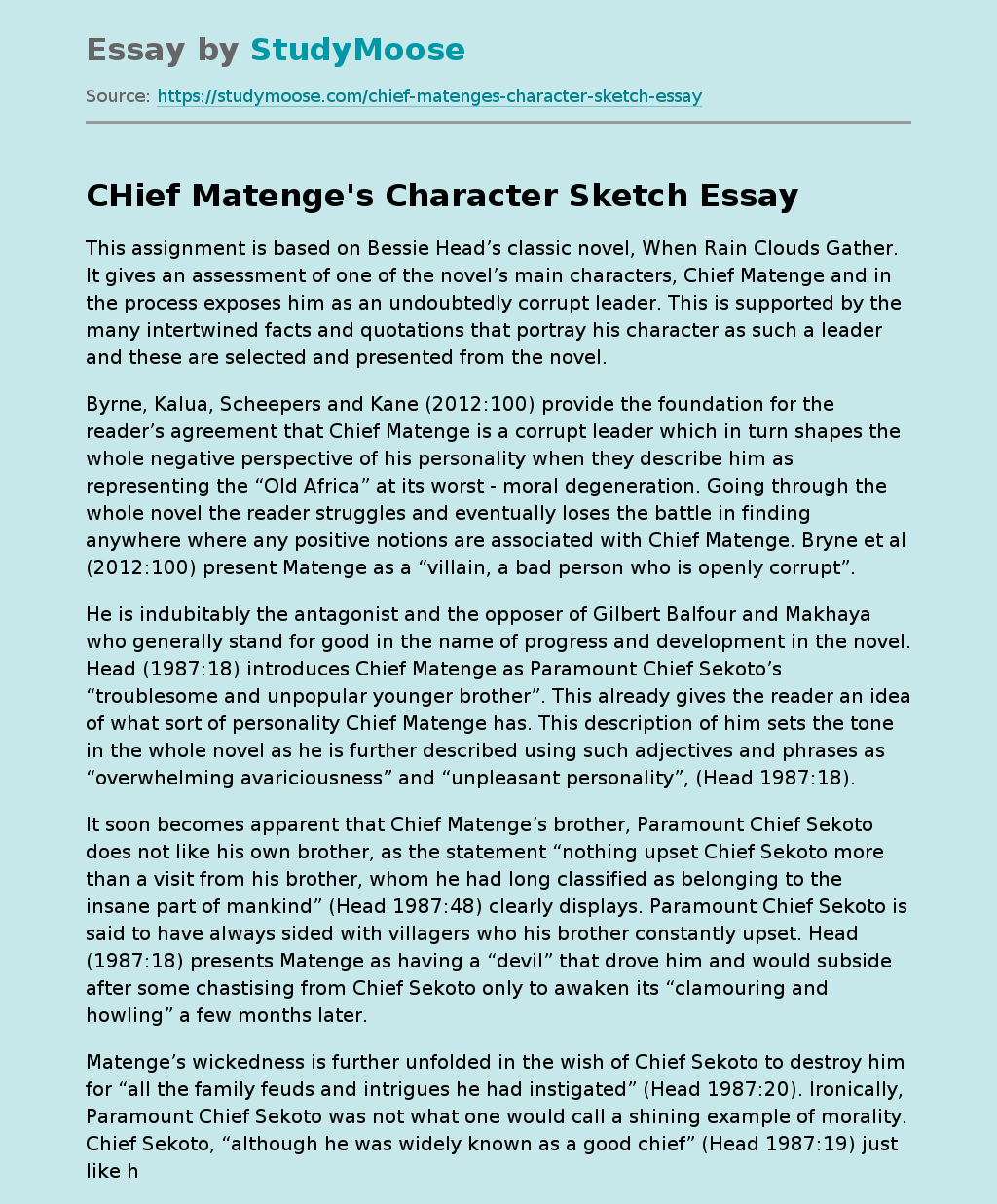