Splitting the Roles of the Chairman and the Chief Executive Officer

The split of the Chairman and the Chief Executive Officer (CEO) roles are considered to be clearer in many ways in Good Corporate Governance. Discuss this statement in view of the Zimbabwean context. There is much debate as to whether companies are better served by splitting the roles of CEO and Chairman.

The advantages and disadvantages of separating these two positions

What are the advantages and disadvantages of separating these two positions? Who is in the best position to determine whether it is worthwhile for a particular board? Does that person or group of people have the authority to impose that structure? These questions serve as a good way to look at the overall conflict between giving corporate management enough authority to do the job while maintaining sufficient accountability to make sure that the job is done for the benefit of shareholders.

Don't use plagiarized sources. Get your custom essay on
“ Splitting the Roles of the Chairman and the Chief Executive Officer ”
Get custom paper
NEW! smart matching with writer

The Zimbabwean Companies Act, King III of South Africa, the British Cadbury Report and the Sarbanes Oxley Act 2002 advocate for the separation or splitting of the roles of the Chairman and Chief Executive Officer.

The following paragraphs try to discuss the splitting of these above mentioned roles and with relevance case study of Zimbabwe. According to the King III the roles of the CEO and Chairman should be clearly stated so as to avoid conflicts. The Table below is a summary of the roles according to the Zimbabwean Companies Act and the King III report.

In large companies, good governance requires the roles be split, and virtually all companies do. In tech start-ups, often the founder assumes the CEO role. He may also hold most of the equity, and therefore appoint himself Chairman as well.

If the Chairman/CEO is an experienced entrepreneur and business manager with significant experience in Boards and fiduciary duty, then he may have the experience necessary to separate the roles of management and oversight. He can guide the Board in its duty, (one of which is to evaluate the CEO), and manage the company, (one duty of which is to report all material events to the Board). An example of such a company where the Chairman is the CEO and Chairman is ZECO Holdings where Phillip Chiyangwa holds these two positions.

This has seen him dominating the Z. S. E listed holding construction company in strategic decision making as well as the daily operations of the company. This further contributed to the underperformance of this organization as evidenced by huge losses suffered over the last two financial years. The very existence of the board is based on the need for accountability. The board exists to keep management accountable for the vast discretionary power it wields. Thus, when the chairman of the board is also the CEO, it makes management accountable to a body led by management.

CEO is put in the position of evaluating his own performance

It can mean that the CEO is put in the position of evaluating his own performance. For the same reason students are not allowed to grade their own exams, that presents conflicts of interests in the corporate context as well. If the board of directors is really there to represent the interests of the stockholders, what is the chief executive doing on the board? Doesn’t he have a conflict of interest? He is the professional manager. He cannot represent the shareholders and impartially sit in judgment of himself. F Nyamtandah of CAPS holdings holds a dual position of being the Chairman and CEO.

This is against the King III Report which states that no one person should hold the position of both the chairman and Chief Executive Officer as this compromises the his independency when there is need for evaluating the performance of the CEO, thus F Nyamtandah evaluates his own performance as he is also the Chairman. Typically, however, start-up company CEOs do not have this wealth of experience, nor the disciplined mind necessary to manage both Board and management processes which can sometimes be in conflict. Too often, having both roles vest in the same individual concentrates too much knowledge and power.

In such companies, other directors are dependent upon the agenda set by the Chairman/CEO for the Board. They can become marginalized, since they won’t know what questions to ask that are not on the agenda. Directors, no matter how diligent, cannot spend as much time keeping current as the Chairman/CEO. Consequently, there is a great tendency to defer to the judgment of the Chairman/CEO who is better informed. All of this is very unhealthy for the Board, directors, and the company. Best practices require the Board to provide independent assessment and oversight of management.

It is the Chairman’s role to guide the Board in its preparation and deliberation. There is no independence if the CEO is guiding the process. Importantly, it is more difficult for the other Board members to exercise oversight over the most powerful Director. Where contentious issues arise, the Board is hobbled in its ability to perform. In the worst case, it would be difficult for a Board to remove a poorly performing CEO if the CEO were also the Chairman. Therefore, it is invariably the case that the company is better served if the Chairman and CEO are different people.

The CEO can focus on managing the company and providing information to the Board. The Chairman in his role as mentor and overseer, can advise the CEO on alternative courses of action, question missing data, probe his analysis and decisions, advise on unintended consequences, etc. A second informed, experienced opinion will usually result in a better outcome. This is why as an important item of governance and best practice, the roles should be split. For this reason, the Chairman should ideally be an experienced technology executive and a former or current CEO.

As a mentor, the Chairman should be a confidante for the CEO; someone that the CEO can come to for advice on the many challenges he faces. There must be explicit trust between the CEO and Chairman, or else the CEO will not be able to confide in the Chairman. To facilitate the mentorship, the CEO and Chairman should meet or converse at least weekly. This will allow the Chairman to keep current. The CEO must alert the Chairman to any material issues that could affect the company’s performance. This is the best time to seek and be guided by advice. This is also the opportunity to identify issues that should come to the Board at the next meeting.

This simply implies that there should be a strong bond between the If a problem is identified at a Board meeting of which the Chairman did not have prior knowledge, then that is a clear indication that the communications between the CEO and Chairman are not as frequent or as strong as they should be. A worse situation would exist if the Board became aware of a material problem that had not been disclosed to the Board or Chairman. That said, the CEO must use discretion in identifying which issues to bring to the Chairman’s attention. It is not the Chairman’s job to review every operational issue; that is management’s responsibility.

The Chairman should be consulted on the material issues which affect the performance of the Company, where the decision or action is not obvious, or where the CEO does not have the requisite experience or skills to manage the issue. The Chairman also reviews the performance of the CEO. Formally, this is done at least annually under the control of the Compensation Committee. On a regular basis, and as required, the Chairman should review with the CEO his actions and decisions. The objective is to improve the effectiveness of the CEO and the quality of his decisions.

This has seen companies like Delta Corporation having Canaan Dube who is the Chairman reviewing the performance of J S Mutizwa who is the chief executive officer. The Chairman should take the opportunity to provide constructive criticism of the CEO’s performance, commending the good work, and suggesting how improvements might be made. The Chairman’s approach in this role is important. If the Chairman criticizes a decision or action that, with 20/20 hindsight proved to be a poor one, without providing any insight as to how the situation might have been analyzed differently at the outset, then he is ot adding value or helping the CEO to improve. He might lose credibility quickly which compromise his ability to continue as Chairman. Rather, the Chairman should review the facts and the thought processes leading up to the decision or action, the time frames, the risks involved, and whether the risks might be mitigated. An analysis of the action or decision can only be useful in the context of the information and risks known at the time. There are always unknowns and risks.

It may be that a thorough analysis leads to a decision that turns out poorly because of the risk involved: “right decision, wrong outcome”. This is not a management mistake. Chairman is not Net Chairman is CEO Revenue ($)USD 120 Million 36 Million  Holdings Net Revenue ($)USD (15 Million) (6 Million) However it can be noted that good corporate governance is characterized by the separation of the CEO an d Chairman roles as supported by the King III Report as well as the RBZ corporate governance requirements for financial institutions.

This is in line with the Zimbabwean Companies Act, Cadbury Report as well as the King III Report. In a nutshell, one may safely say that good corporate governance is characterized by the splitting of the CEO and Chairman roles and clearly defining these roles hence creating a good corporate culture for the greater benefit of stockholders and stakeholders.

Splitting the Roles of the Chairman and the Chief Executive Officer. (2020, Jun 02). Retrieved from http://studymoose.com/splitting-the-roles-of-the-chairman-and-the-chief-executive-officer-new-essay 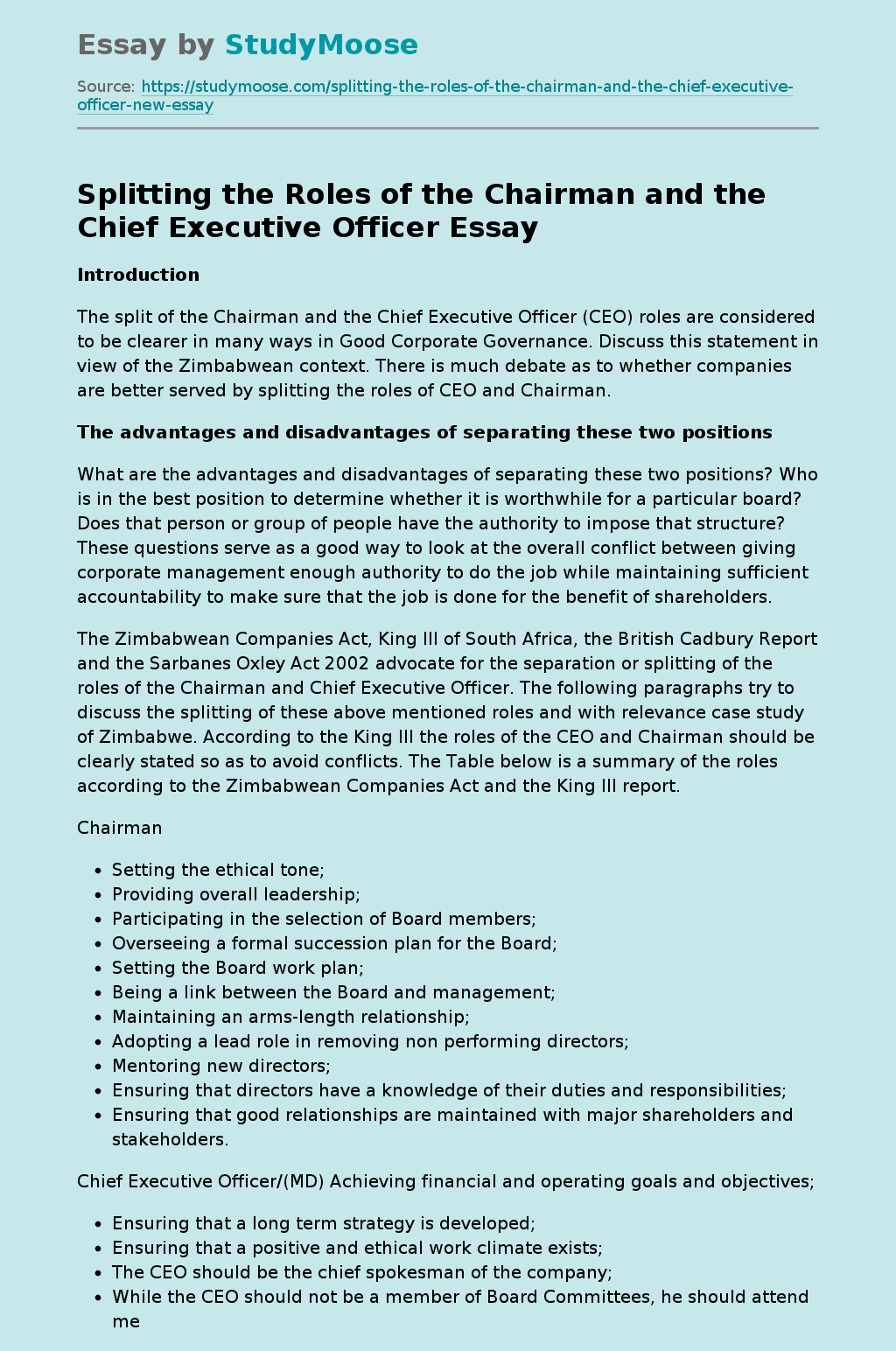