Summary about The Ransom Of Red Chief

“The Ransom of Red Chief” is a short story written by American writer William Sydney Porter, better known as O. Henry. Like many of O. Henry’s works, the story is notable for its plays on words, humor, and plot twist. Written around the turn of the 20th century, the story is a short rendition of what you might get if you crossed “Home Alone” with “O Brother Where Art Thou?” It makes for a diverting 5-10 minutes that will bring at least one smile to your face while reading and perhaps a couple chuckles.

Don't use plagiarized sources.
Get Your Custom Essay on Summary about The Ransom Of Red Chief Just from $13,9/Page

The story takes place in rural Alabama. Two crooks, Bill Driscoll and Sam (we never learn his last name) have about $600 between the two of them and figure they need another $2000 to pull off a “fraudulent town-lot scheme.” And by the way, you learn in the first paragraph of the story that these two fellows are the self-educated type who think that using big words makes them smart.

They have it all figured out. Except for the fact that the words they use are wrong or made up, accounting for the humor of the undereducated ne’er-do-well who thinks he has a plan.

So Bill and Sam decide that in order to get their money, they’ll kidnap a child from a prominent member of a small town and thus select little Johnny Dorset, a boy of nine and the only child of Ebenezer Dorset, a “mortgage fancier.” The trouble starts from the get-go when they call out to Johnny to tempt him to the car. Johnny throws a piece of brick and hits Bill in the eye. The two get out of the car and grab Johnny, who puts up a struggle before they get him in the car and drive out to a cave in the hills. Sam goes to return the car, and when he returns he finds Johnny has become Red Chief — and Bill has bruises on his legs.

Life over the next day doesn’t get any better for Bill as little Johnny, who hates school, doesn’t like girls, and is generally a little terror, finds the idea of camping out to be great fun and indulges his sadistic imagination on his captors, nearly scalping Bill the next morning, shoving a red hot potato down his shirt and smashing it with his foot, and riding Bill like a horse. It’s enough to make Bill announce that his favorite Biblical character is King Herod (who had all the young boys put to death around the time of the birth of Jesus). And even Sam threatens the boy with taking him back home if he doesn’t behave.

Sam and Bill then draw up their ransom letter and have it delivered to Ebenezer Dorset demanding $1500 (Bill insists that no one will pay $2000 to have Johnny returned). Mr. Dorset responds with a letter of his own telling “Two Desperate Men” that for $250 he will accept Johnny back, but that they better do it at night as the neighbors believe Johnny is gone for good and he can’t be held responsible for how they’ll act if they see him being returned.

Bill begs, and Sam relents. So that night, they take Johnny home. Johnny grabs Bill’s leg, holding on for dear life so he isn’t returned home. Johnny’s dad pries him off. Bill asks how long he can hold Johnny, to which Ebenezer replies he’s not as strong as he used to be, so maybe ten minutes, to which Bill replies that by then he should be close to Canada, and takes off running.

To be best appreciated, the story should be read. It can be found online in a number of places (the copyright has expired in the United States), and enjoyed in a few minutes. It crosses the line between reality and fancy, but it’s easy enough to suspend any notion of disbelief long enough to enjoy the story. If you have 5-10 minutes to spare for a fun story, give this a shot. And then you can read some of O. Henry’s other stories, many of which are also funny and have the twisted plot endings that have become common in today’s humor.

Analysis of the Book

“The Ransom of Red Chief” is not simply a story in the O. Henry tradition of surprise endings; it is also a story in the pattern of classical comedy, which assures the reader that sometimes in this world the underdog can win. Generally, however, slaves or servants, wives or lovers, have prevailed by outwitting their masters. In “The Ransom of Red Chief,” the kidnappers are defeated not by any scheme devised by Johnny but simply by his nature. Johnny is, himself, the ultimate ten-year-old terror, certainly worse than most small boys his age but not so unlike them as to be a monster. Part of the humor of the story comes from Johnny’s relationship to the generic ten-year-old boy. Like the generic boy, he asks questions, rambles, fantasizes, and enlists playmates.

While Sam and Bill could have coped with the average ten-year-old, they are helpless in Johnny’s hands because Johnny is not average. He is tougher, meaner, and wilder than the ten-year-old whom these street-smart criminals thought they were victimizing. A second element in the underdog theme involves the city and the country. The sophisticated con men, Sam and Bill, select Summit, Alabama, for the scene of their crime because they think that the country bumpkins will be easy to fool: their law officers inept, their bloodhounds lazy, and their weekly rural newspapers ineffectual. Sam’s visit to the bewhiskered, tobacco-chewing citizens of Poplar Grove is related with unconcealed… Related to technique

The narrative technique of the story is also reminiscent of the tall-tale tradition. Sam, the leading con man, speaks in the first person, as if relating his story to an audience: “Wait till I tell you,” “Yes, sir, that boy seemed to be having the time of his life.” He is given to malapropisms, such as “philoprogenitoveness,” and to literary words, such as “sylvan” and “dastardly,” which suggest that he is overreaching his real capacities, as he does in the story. However, both Sam and Bill can use the language of frontier America, too, comparing Johnny to a “welter-weight cinnamon bear” or a “two-legged skyrocket” when they choose to exaggerate, saying that Johnny has “somewhat got on my nerves,” in a comic understatement. Nor is the story without its scenes of comic pathos, all related by Sam, as when Bill apologizes for releasing Johnny, then turns to find the boy behind him and seems for a time to be losing his sanity. It is Sam who describes Bill’s pleas, which finally result in a “getaway”.

Summary about The Ransom Of Red Chief. (2016, Apr 14). Retrieved from https://studymoose.com/summary-about-the-ransom-of-red-chief-essay 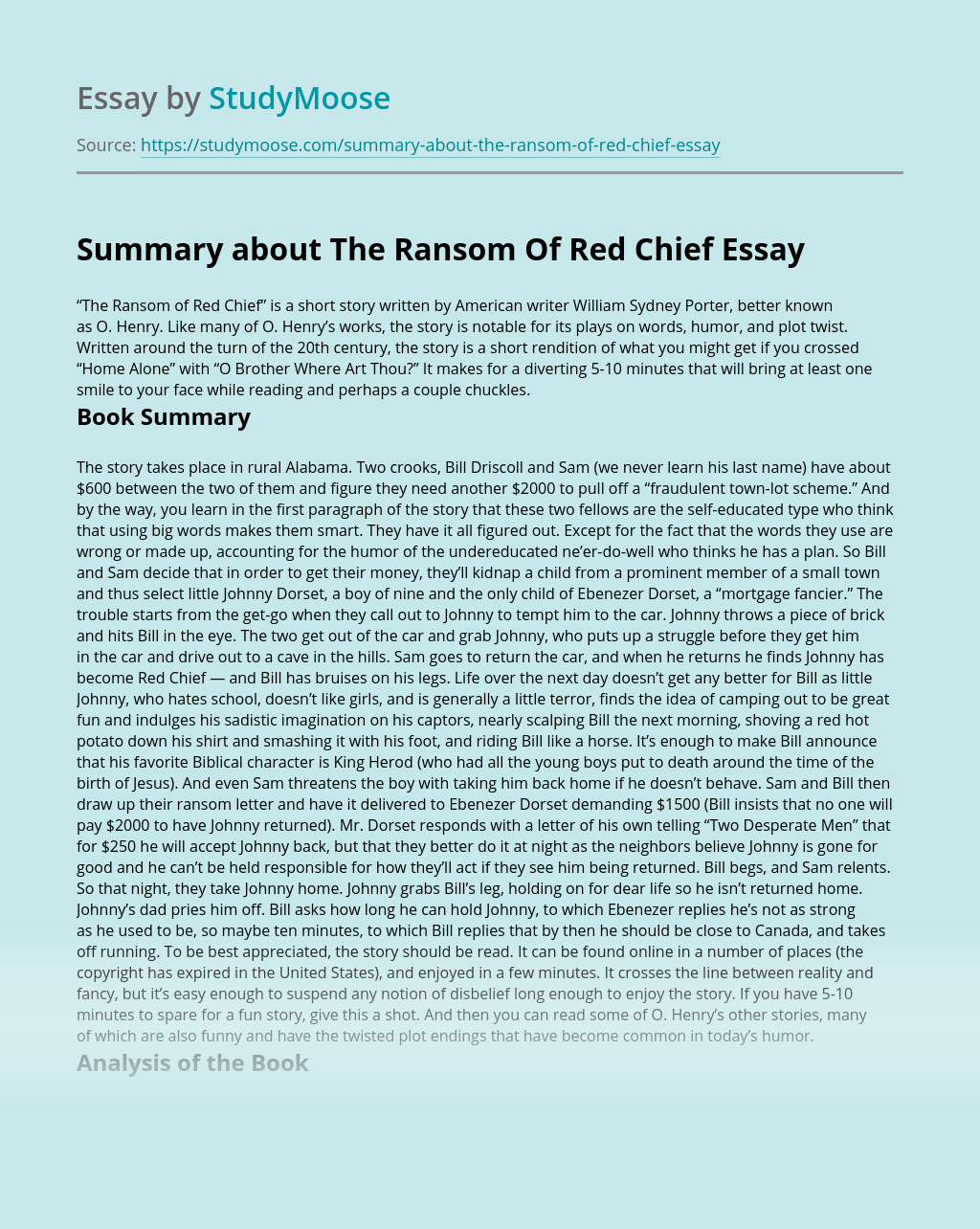 How to Keep Fit

Are you slouched in front of a computer all day long? Does your packed schedule leave little time for an honest-to-goodness workout? Having a desk job should not be a reason to slack off on keeping fit. There are ways to squeeze in some workout time to get your body in top form even while...

Biblical Worldview in Profession of Psychology

Introduction The foundation to Christian faith is the belief that mankind is created in the image of God. My major/program of study is psychology. I am wanting to counsel victims of domestic violence. Which can be a very rewarding job because it gives me many opportunities to be able to reach out and help others...

Get Essay
Poetry of William Shakespeare and Elizabeth Browning

Lord of the Flies Response to Literature

Every great society has strived and prospered due to the laws and principles the civilization has lived by. But when a society removes these principles that are laid out what could result? In The Lord of the Flies by William Golding, as a result of a terrible war a plane crashed landed, killing the pilots...

Think about the demand for the three popular game consoles: Xbox, PS3 and Wii. Explain the effect of the following event on the demand for Xbox games, and the quantity of Xbox games demanded, other things remaining the same. a) The price falls b) The price of a PS3 and a Wii fall c) The...