The character sketch of Lilian Matfield

Lilian Matfield is one of the main characters in the novel Angel Pavement that as the rest suffered from Mr. Golspie , who destroyed their life and happiness. But as far as Lilian is concerned, Golspie affected her stronger than the others as there were her feelings, her dignity that turned out to be absolutely neglected by the man who at fist lit the fire bw the two himself. Miss Matfield, a typist, was one of those strictly modern young ladies. She was not pretty, but she might have been handsome if somebody had kept telling her she was pretty.

Don't use plagiarized sources. Get your custom essay on
“ The character sketch of Lilian Matfield ”
Get custom paper
NEW! smart matching with writer

Miss Matfield was always dissatisfied with everything around, with people, things and life on the whole. And this dissatisfaction even reflected in her appearance. …her face, her voice, her manner, all pointed to the conclusion that Lilian Matfield nursed some huge, some overwhelming grievance against life, but though she gave tongue to a thousand little grievances every day, she never mentioned the monster.

But there it was, raging away, when she was complaining or being bitter about everything; and there it was, raging away more furiously than ever, when she was being bright and jolly, which was not often, and hardly at all during business hours. Miss Matfield had a good education behind her, she was a promising worker. In her own opinion she was quite different from these others, much superior, a more vital, splendid being. At the office she was posh and bossy, a rather formidable sort of girl, as Mr.

Dersingham considered her to be. She put Mr. Dersingham, Mr. Smeeth and the others in their places and knew exactly what she thought about the others. Mr. Dersingham she neither liked or disliked, she merely tolerated him. Mr. Smeeth seemed to her a pathetic creature who lived a grey life, his drudgery sometimes irritated her. Turgis she despised and even resented. Stanltey and little Cockney girl were for her just a couple of amusing little animals, a pair of spaniels, inferior and somewhat neglected.

It seemed that for her arrogance Lilian paid with solitude. The monster she lived with and was afraid of. The feeling that was an essential part of her life and a part of the Burpenfield Club, where she lived in. The Burpenfield Club was one of the residential clubs provided for girls who came from good middle-class homes. You were congratulated on getting into the Burpenfield when you first went there, and you were congratulated even more heartily when you finally left it. The atmosphere was rather depressing. What Miss Matfield disliked most about the Burpenfield was the presence of all the other members, whose life she had to share. There were too many of them and their mode of life was like an awful parody of her own. Miss Matfield saw in one of these women an awful glimpse of her future.

She was scared of turning into one of those spinsters in their early forties, whose lives narrowed down to a point at which washing stockings became the supreme interest. But time was slipping away and nothing was happening. Soon she would be thirty. Thirty! People could say what they liked — but life was foul. Although Miss Matfield disliked the club she still had some friends there. Her best friend Evelyn went roaming round the Empire and Lilian could not help envying her. another decent and amusing one gone! Something exciting happening to somebody else, as usual, but she stayed on in Angel Pavement. Lilian was so busy feeling sorry for herself. The other friend Caddie was really a silly creature, but nevertheless she contrived to have quite an amusing, even exciting time. Her boy-friend was even sillier than she was and Miss Matfield admitted to herself at once that she could possibly endure a single hour of his company.

It was possible to envy Caddies state of mind while despising her taste. It was pity that silly young men did not amuse her, for there were plenty of them about. The same was with Norman Birtley, whom she considered a feeble fool. She was Lilian Matfield, Lilian Matfield. She felt darkly that somehow she was being conjured into somebody miserably different, somebody stiff and faded and dull. What Lilian was beginning to like were middle-aged men, men who could make her feel she was still a mere girl. Mr. Golspie was definitely different from all the people that surrounded Miss Matfield. He claimed her attention, was amusing, easily the most amusing person on the horizon. She could not make up her mind about him and this annoyed her. Golspie irritated one half of her, the sensible half, by making the other half feel fluttered and foolish. She could not say whether she really liked him, but at least he made Angel Pavement more amusing.

Miss Matfield was bored with everything, she wanted to lead a real life of her own, full, adventurous, gay. That was exactly what Mr. Golspie suggested. It was all amusing and exciting. It was not an experience that could fall into easy categories. It could not be tasted, examined, reported on, like most of Miss Matfields experiences. If it belonged anywhere, it belonged to the fire, flood and earthquake department. Mr. Golspie promised to make her life interesting and she gave up yield. Now she felt tall, healthy, strong, a fine woman of the world. She was ready to go for the weekend with him and even to marry him if he had asked. But her amusing life ended very soon.

Mr. Golspie simply tossed the weekend away and Miss Matfield with it. She was burning with shame and resentment. Never before had she felt such bitter contempt for herself. His sudden indifference left her feeling pitiably small and silly. The whole affair was just a cheap imitation, as well as a cheap imitation of a wedding ring. With her feelings destroyed Miss Matfield remains firm and strong, although theres none to support her, she relies on herself, ready to work hard and do anything that any man can do to become a capable business woman. 23.The character sketch of Lilian Matfield

At the very beginning of the book M. makes an impression of a snooty and condescending secretary, indifferent to whats going on in T &D, possessing neither outstanding appearance nor character, just a usual out-of-the-crowd woman. She is supported by her fathers monthly payments and lives in a residential club for girls from middle-class homes in the country compelled by economic conditions to live in London as cheaply as possible. The place is so unbearable and the institution atmosphere so oppressive that the only thing M.M. wants is to get away. She never ceases to curse the place where she has to share life with all kinds of shadow and inferior people: young naive girls and old spinsters. The whole sight seems too depressive and cheerless and resembles a cage for Miss M.dreams and fantasies.

She wasnt pretty, but her voice, manners, all pointed to that she nursed some huge overwhelming grievance against her life, but though she gave tongue to a thousand little grievances every day, she never mentioned a monster. The idea of a man warms strongly her secret heart. If she married him she might want to domesticate in a beautiful old country house in which she has spent so many imaginary Christmases. She longs for love and attention, looking forward to start a new life, tired of dullness and shabbiness of everyday life and office routine. She hates it and wants to run away from it all to a deserted island and spend the rest of her life in isolation with a handsome man from her fantasies.

She wants to evade reality and escape from her secretly imaginary world. Her feelings have already been hurt by a monster and its immensely difficult for her to revive faith in love and romance. Miss M. is a young, energetic, good-looking woman, deeply dissatisfied with her present life and oppressed by the surrounding atmosphere and people, waiting for her savior, her prince. As soon as the first candidate turns up, Lillian readily jumps at the chance and throws herself upon new experience, no matter how improper and indecent it seems to look like.

She creates an idealistic image of Mr. G. and falls in love. For sure she has doubts about her relationships but now its too late. She patiently waits at the station for her man, full of hopes and expectations and inevitably gets disillusioned. Finally when Lillian realizes thats its all in vain and that her savoir isnt going to come, she feels uncomfortable, foolish and develops disdain towards herself, her dreams and her imaginary world.

The character sketch of Lilian Matfield. (2016, Nov 09). Retrieved from https://studymoose.com/the-character-sketch-of-lilian-matfield-essay 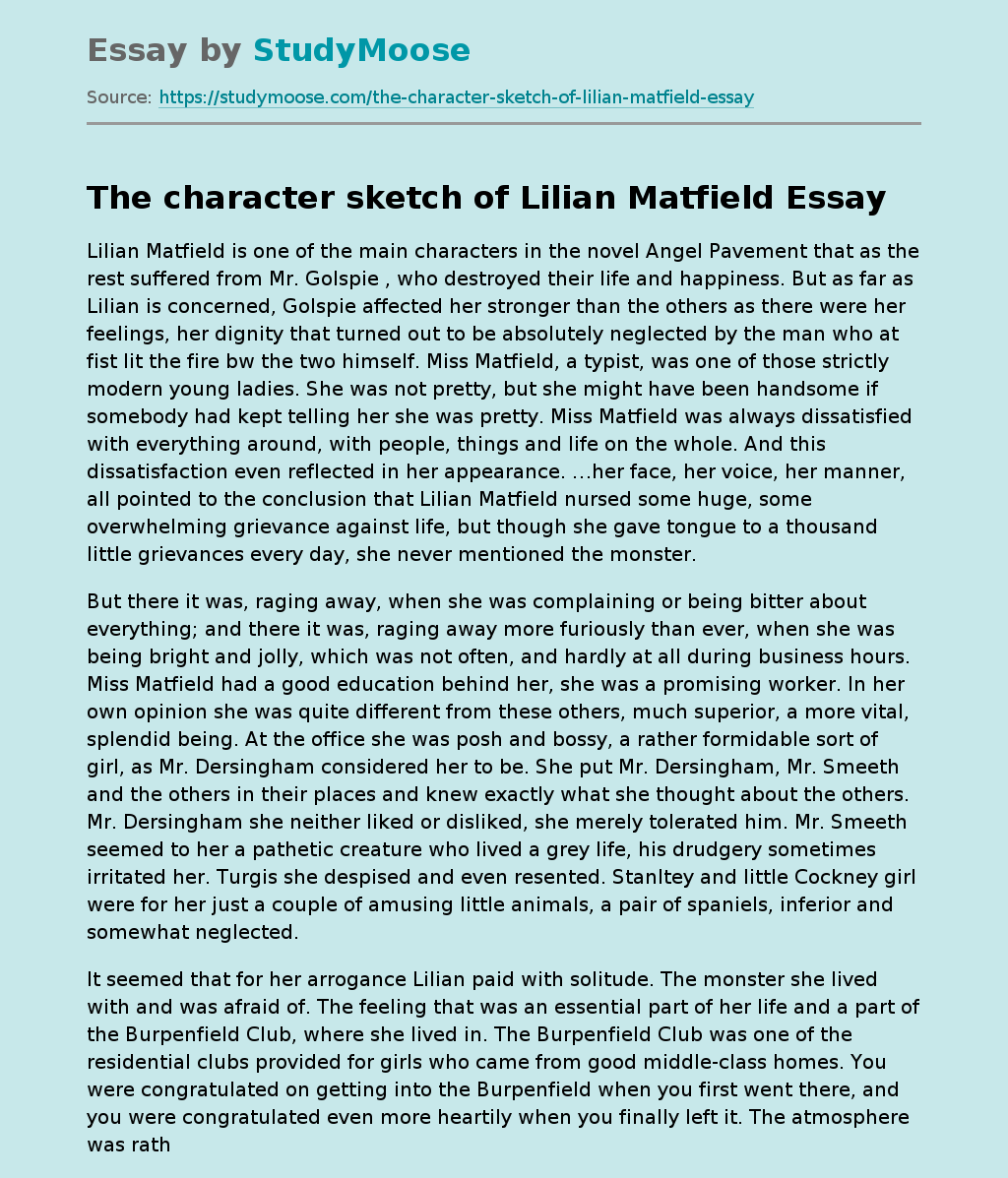