In the beginning of the movie I think the only person who falls under the open self category is Brian. He is upfront with the others about his grades, his academics, and his family. As the day goes on and he starts to bond more with the others he starts to talk about his thoughts and emotions as well. I didn’t think there was any one with a blind self. I felt that John was under the hidden self because he was just know for breaking rules, and doing what adults told him not to do.

Don't use plagiarized sources. Get your custom essay on
“ The Breakfast Club Film Analysis ”
Get custom paper
NEW! smart matching with writer

They also thought he was selfish and did not take into account any one else’s feelings or care about what he would say to the others.

He then proves himself as not selfish when he distracts the princable so the others can get back to the library without being noticed. I also felt Allison would be under hidden self because she is very quiet and to her self, not revealing anything about her life to the others in the beginning, but then she starts to get more comfortable with them and starts to open up and be truthful with them about why she is there and how she feels about her family.

Andrew and Claire to me both fell under the unknown self. Andrew just wants to please his father. He lives his life through what his father is expecting of him especially with his wrestling.

He doesn’t do his think on his own, but through what he thinks his father would want.

Claire is the privileged girl, who is unsure of herself in her own crowd of popular friends. I don’t think she wants to be popular and live up the other kid’s standards and have the same type of reputation. An example of the self-fulfilling formation is when John makes his comments about the rest of the student’s home life, and what it is like for them and their families at home. Claire judging John and saying that he is a “pig” when he is pressing her with sex questions would be a personality formation.

And I think all the kids making their first impressions on the others are the primacy. Consistency would be Andrew being an athlete. I think for the fundamental attribution error I will talk about all five of the students in the movie. The students judge John on being the bad boy, menace, and bully. He does act like all of these things at the beginning of the movie, but with bringing out the other kids insecurities, and making them all feel uncomfortable with the things he says, he faces his own home life reality of being abused by his father.

The abuse he is receiving at home is making him act out in school, and put up the act of being defiant, and bad. All of the students have a preconceived notion about Andrew because he is a star athlete, he has a perfect life. The reason he is in detention is because he injured another student. He did this to try and impress his father; he also says he joined the wrestling team because his father wanted him to. So essentially he is just looking for acceptance from his father and is willing to go as far as hurting another student to get that acceptance.

Brian is known as the nerd, or the brain. He is in almost all of the academic clubs and does great with his grades in school. He says his parents push him very hard to maintain his grades and tell the others that he would rather kill himself then get a failing grade. Which his why he is in detention. Allison is the quiet one. She starts off by not saying much of anything. Then she opens up with the group saying her family ignores her at home, and would rather be at detention because she has nothing better to do.

Claire is the rich and privileged girl, who everyone thinks gets anything she wants. She opens up and says that her parents play her against each other in their relationship, and how she really doesn’t like the fact that she is under so much pressure from others because she is in the popular group. To everyone’s surprised she also reveals that she is a virgin. I think when John is talking to Claire about her being popular and assuming she has sex she has a mental distraction and gets so mad she cannot think straight.

John is also bias towards Brian when talking to him about when academic clubs he is in. Andrew starts to put John on the spot when talking about his home life and I think John has a lack of appropriate focus when he tells Andrew that he doesn’t want to talk about it anymore and walks away frustrated and mad to sit on the staircase. In my opinion all five of these kids have premature judgment. They think Andrew is just a jock, Claire is the popular girl, Brian is the nerd, Allison is the quiet and weird one, and John is the menace, and is obnoxious. 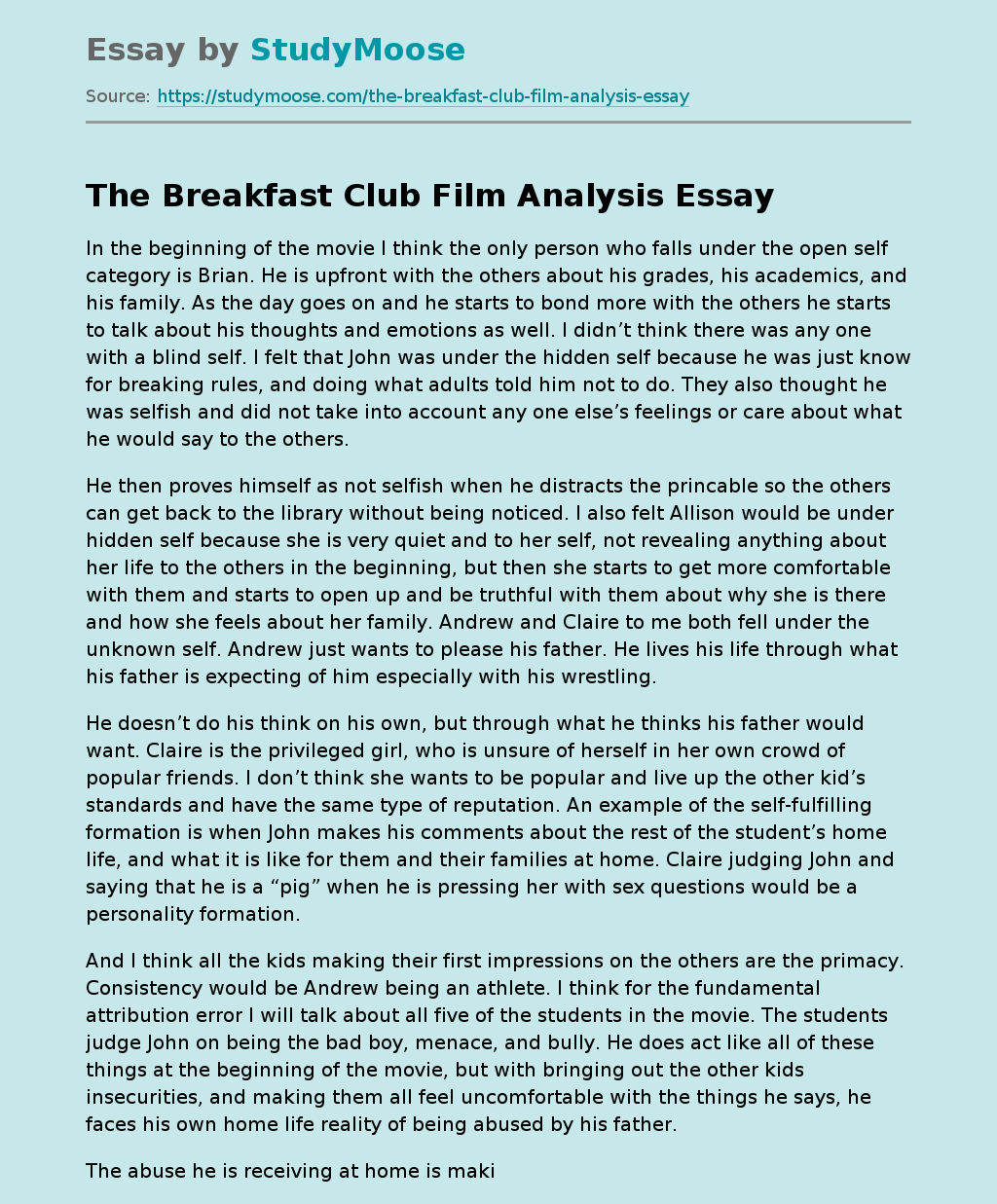