The change that occurs from middle childhood to adolescence is arguably one of the most profound changes that children go through. Not only do children change physically but emotionally. “Adolescence is the transitional period between late childhood and the beginning of adulthood, and marks the beginning of the reproductive lifespan in humans. Adolescence involves sexual maturity in terms of hormones and physical development of the body, and is also characterized by an increase in the complexity of group interactions and thus social behavior (Lerner and Steinberg, 2004)”.

Don't use plagiarized sources. Get your custom essay on
“ Middle Childhood and Adolescence Paper ”
Get custom paper
NEW! smart matching with writer

During this time of transition many develop a stronger sense of self and begin to separate from completely associated themselves with their family members. This is a completely normal stage of transition for children turning into adolescents and becoming a vital part of a larger community.

There are many ways a child’s upbringing can affect how they mature into adults. A primary aspect taken into consideration is the family dynamic in which a child is raised.

In many cases a child with a family that is well structured, has sound moral characteristics, and provides a stable environment is more likely to be a successful member of society. Whereas a child who has a family that is dysfunctional is less likely to be in a healthy environment emotionally or physically. For example, “Recent research has suggested that the family plays an important role in depressive disorders (Keitner & Miller, 1990; Keitner, Miller, Epstein, & Bishop, 1990).

”(Miller, I. W., Keitner, G. I., Whisman, M. A., Ryan, C. E., Epstein, N. B., & Bishop, D. S. ,1992). A dysfunctional family can become a catalyst for many undesirable emotional attributes and or physical reactions that can occur after being subjected to higher levels of dysfunction. For example if a child is verbally abused by a parent they may exhibit such behaviors towards their peers to gain some form of control in their life.

Peers from middle childhood onto adolescence make a substantial change with age. Many children at a young age learn how to socialize with other children and generally behave well with the collective group. As children grow in age and their hormones develop, they become more aware of their surrounding social group. This can have both negative and positive impacts on development. “The poor peer relations of aggressive children could make them isolated psychologically or physically from peers, which in turn might result in depressive or disruptive problems.” (Yamasaki, K., & Nishida, N. 2009). Whereas in a healthy peer relation environment a child will be more likely to excel socially and develop a strong sense of individuality amongst those around them.

During the change from middle childhood to adolescence, children are begin to develop their own identity. They are physically going through major changes. Where sexual differences before adolescence usually played a dividing factor when it comes to social interactions, chemical changes that happen to most adolescent boys or girls bring about a change in interest. Often children begin to think more abstractly during this change instead of just asking why they think of the multiple possibilities. Children going through adolescence are going through body image struggles, boys feel pressured to have to meet “masculine” standards, whereas girls go through major changes in body image and can feel vulnerable. “With puberty, normal increases in girls’ body, fat can impact body image and self-concept negatively for many. Both boys and girls might be concerned with skin problems, height, weight, and overall appearance.” (Oregon State University, 2001).

Almost all children face this significant change through puberty, which brings on emotional changes as well. It is important to encourage an understanding of healthy body image to boost confidence. Changes in Moral Values from Middle Childhood to Adolescence During the change from middle childhood to adolescence moral values begin to advance beyond just the understanding of what is right or wrong determined by peers. During middle childhood children think more along the lines of what is fair, and rely on more of a give and take dynamic. With a transition to adolescence children begin to take into account others feelings and their perspective.

Also when a child becomes older they come to see “the bigger picture”, and become influenced by society’s moral standards. “Increasing ability to take perspective of others into account with own perspective. (Children) Begins to question social conventions and re-examine own values and moral/ethical principles, sometimes resulting in conflicts with parents.”(Oregon State University, 2001). The mind begins to open to understanding different scenarios. This is when most children begin to question their peers and even formulate their own opinions, sometimes that involves changing from having the same ideals as their parents.

There are many changes that happen during the change from middle childhood to adolescence. Physical changes include changes in bodily image, many children enter into puberty at this time. When children become adolescents they become more involved with their self-image and individuality. Emotional changes begin to happen at this age as well, some attribute it to hormone changes, however cognitive growth also has a lot to do with the change. During this time of change it is important for families to provide helpful guidance without over stepping personal boundaries of young budding adults. Being a supportive family will increase a child’s ability to transition well and become a successful, well-rounded member of society. 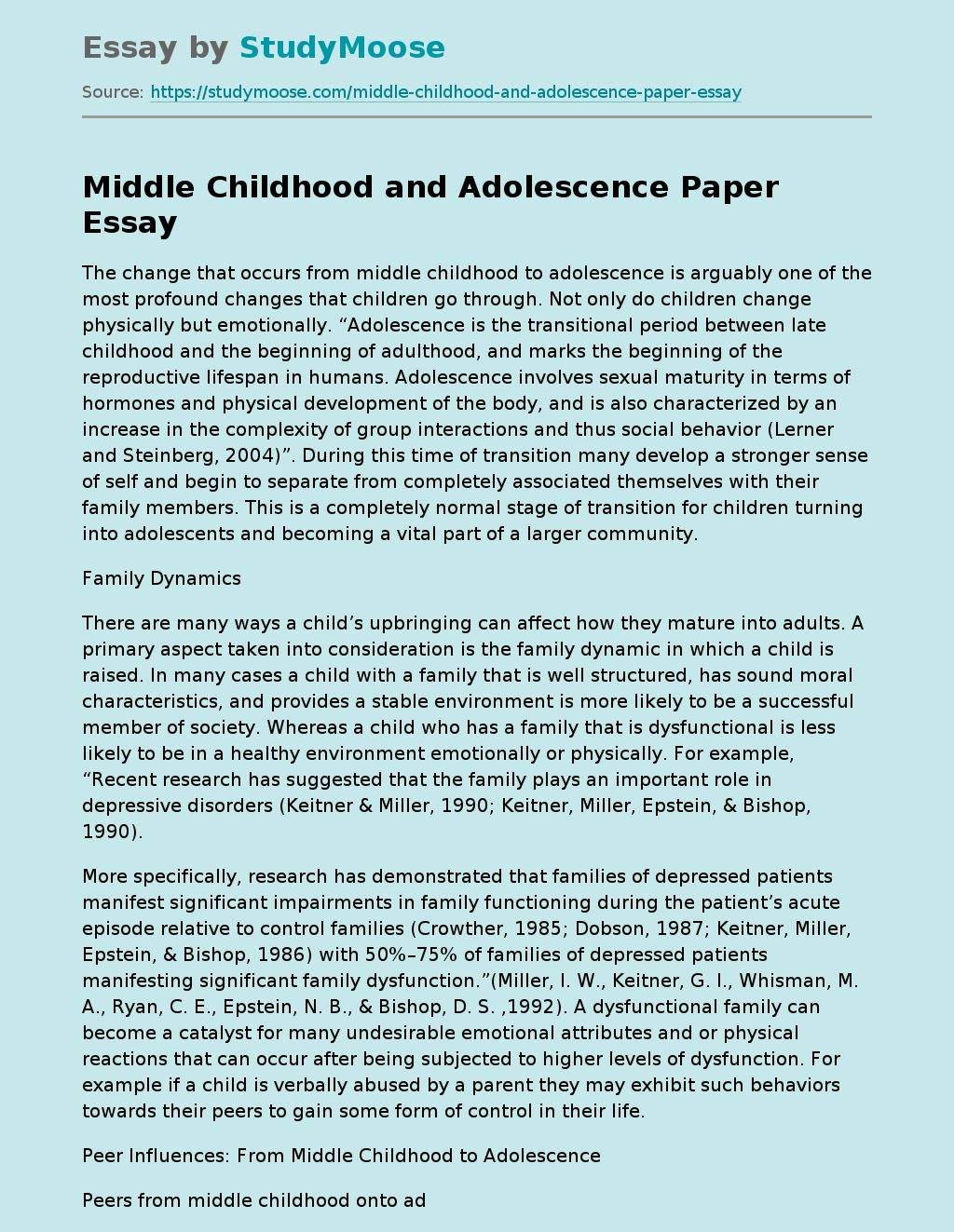