Middle childhood development is a big time in a child life. They begin to become more independent and rely more on themselves without the help of their parents. This is also a great time to still create solid bonds with your child before they enter the adolescence stage which begins at 13 (Dr.Laura Markham, 2013). With the peer pressure from friends and associates having a good foundation with your child early can save you a ton of stress.

Don't use plagiarized sources.
Get Your Custom Essay on ﻿Middle Childhood Development Just from $13,9/Page

They understand more and can differentiate between right and wrong. Children at this age give more attention to friendship and teamwork, but continue to be strongly influence by their parents’ judgment. At this age children have the ability to experience and describe feelings and thoughts with parents and friends. Middle childhood is a time when children develop social relationships. The social skills learned through family and peers give them ability to participate in meaningful communication that later provide foundation for challenges as adolescence.

This improves their relationship and encourages them to be successful in future.

According to Piagets theory of Cognitive Development between the ages of 6-11 children are at the stage of concrete operational thought. This involves a growing ability for children to use logic and thought. For example, a child age 8 will understand that it is wrong to steal even if they only did it because they were hungry. A toddler may take the food and eat it while knowing that it was wrong but not feel bad because in their mind they only did it because they were hungry. Same situation but different thought processes because of the age and development of the child. Stable and supportive families are crucial during middle childhood development stage. Supportive family members and friends improve social development and children’s self-concept is basically shaped by relationships with parents, teachers and peers.

Often they have little concern about their physical appearance though certain pressure during the later years 9-11 to look like the traditional boy and girls’ body image declines, especially with puberty. At this stage lower self-control and emotional stability may be observed. At this stage parents should be very careful about how they say and do things because children especially look to their parents at this age for confirmation on how to act as such. Culture also plays a major role in child self esteem because if influence your children to be strong and independent as children they take that into adolescence and early adulthood. In conclusion, middle childhood is an important stage in a person’s development in life. These are the crucial years that you start to see a change in your child and you can either change with them or have a hard time adjusting to them. I myself have a child that is 11, and I can honestly say that she has grown so much over years both physical and emotionally. 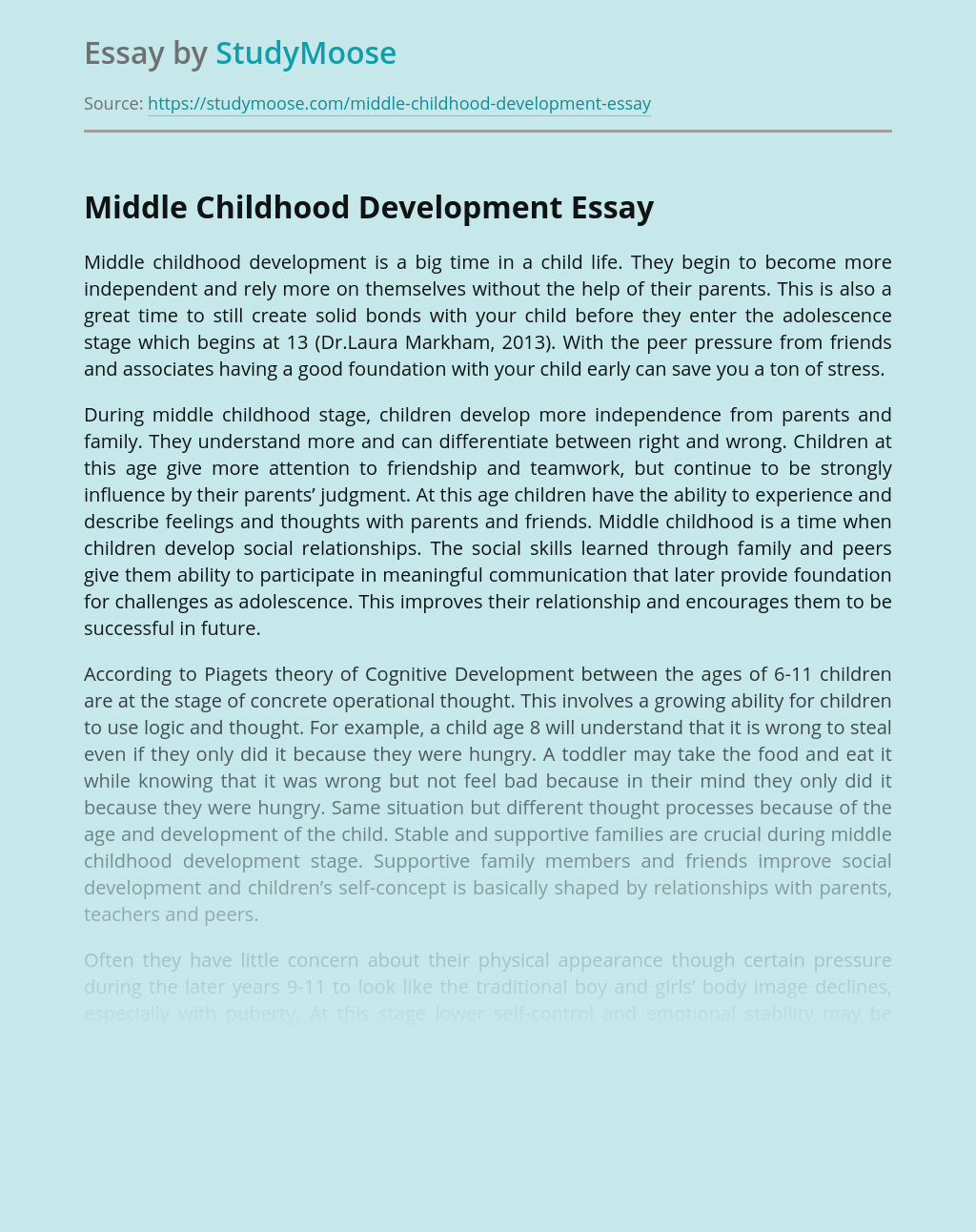 The Causes of Premarital Sex among Teenagers

Teenagers are immature and innocent, they are curious about trying new things in their adolescences. Therefore, they can easily go astray if they lack correct guidance in this period. Premarital sex is a sensitive but attractive topic to teenagers, which requires correct guidance from their parents or schools. It is reported by Wang (2012) that... VIEW ESSAY

Physical, Cognitive, Social, and Personality Individuals experience many changes to the physical body, cognitive abilities, social development, and personality development throughout the various stages of life. This article looks at a few of the changes experienced during stages of development of the adolescent, young adulthood, middle adulthood, and late adulthood. Adolescent Stages of Development The... VIEW ESSAY

Today, many high school students are entering the work force. Students are becoming more and more eager to start working and become independent. Although a beneficial balance of school and extracurricular activities as well as employment can be productive, it is very difficult to maintain. If a student is intending on going to college, he... VIEW ESSAY

Middle childhood development is a big time in a child life. They begin to become more independent and rely more on themselves without the help of their parents. This is also a great time to still create solid bonds with your child before they enter the adolescence stage which begins at 13 (Dr.Laura Markham, 2013).... VIEW ESSAY