Why did Maria Montessori encourage the development of imagination rather than fantasy? Why not fantasy under the age of 6 years old? How can we stimulate imagination and its productivity? Give detailed relevant examples.

“Imagination extends man beyond his wildest dreams-fantasy will ultimately limit him.” There is difference between Fantasy and imagination that people seem to misunderstand and the value that each has to the child’s development. Imagination is the ability to conceptualise objects or events which are not present, but which are reality based, so imagination is linked to cognition.

Fantasy on the other hand, is unrealistic, it’s is a mental process whereby we create or escape to an alternate world that doesn’t exist.

Maria Montessori observed that the developmental and normalising effect of reality- based activities had more important role as the central pastime for children. When children got given a choice, children chose real rather than pretend activities. Maria Montessori encouraged the development of imagination rather than fantasy because imagination is the manifestation of abstract thought; it’s a mental process whereby the child comes to understand the world we live in.

The child uses his intellect to take what he has learnt and picturing and implements it in his work and play. “Human consciousness comes into the world as a flaming ball of imagination. Everything by human beings, physical or mental, is the fruit of someone’s imagination”. Maria Montessori believed that children need reality and accurate information, based on concrete things that the child can explore sensorially.

‘Imagination can only have a sensory basis. The sensory education which prepares for accurate perception of the different details in the qualities of things is therefore the foundation of the observation of thing phenomena which present themselves to our senses’. She believed that Fantasy obstructs a child’s natural development, “when a mind is full of fantasy, they build up a wall against reality” this she called the “flight into fantasy”. Children look to us as role models, we are trying to teach him about the world and if we feed the false information or allow fantasy the child will build up impressions that is not reality based. A child engages with real life stories because it reflects his/her own experiences, this all aids imagination as games of role play or pretend games the child
will engage with- it reflects their lives and helps them come to terms with and understand it. Through the use of imagination the child comes to build understanding and knowledge of his world gradually.

Maria Montessori believed that when a child becomes engrossed in his character she/he is often unreceptive to other stimulation or social interaction. The child misses out on the activities around him/her because she/he is lost in fantasy.

Maria Montessori believed imagination is a wonderful attribute for children. It allows them to use prior experiences to inform their understanding and play. The repetitive nature of activities in a favourable environment allows impressions to become fixed in the mind.

She didn’t believe that children under 6 years old should be exposed to fantasy because they are still in the process of developing themselves and learning about the world. She felt it was not helpful to young children. She believed that it is very hard to remove fantasy once it had been in embedded in the child and try replace it with reality,” there is nothing so difficult as to remove a prejudice once it is ingrained in the human mind and adhered to by a community. If you want to bring in a new truth, you must hammer it into it will simply be disregarded”.

Children pass through definite sensitive periods from birth to 6 years old. Fantasy will interfere with a child’s sensitive periods. A child passes through these definite sensitive periods to develop skills and gain mental knowledge, if a child’s mind is stuck in a fantasy world (unreal world) he will miss his/hers sensitive periods and once a sensitive period is past it can never be repeated. “No amount of higher education can outweigh what a child has learnt in infancy”. Fantasy is not tangible; it is not concrete and has no sensorial base. Fantasy will then cause a child to be deviated, this could cause tantrums and a child will much rather escape from reality than facing his/her problems. Fantasy can be dangerous, children become unaware of the consequences of their actions, they develop a false idea about life and this can lead to disappointments.

We can stimulate imagination and its productivity by preparing a rich environment for the child. The prepared environment should have activities and materials, reference and information books are valuable resources for this. The activities of everyday living and sensorial material provide the child with experiences which a firm foundation for later learning. The materials are simple and uncluttered by unnecessary decoration, such as popular cartoon characters. The activities which are presented are attractive because of their focus, not because the child is enticed by a clown or kitten on the box. The information that the activity provides is clearly assimilated by the child and gives her/him valuable skills. It must also recognise that these activities themselves prompt the use of imagination, often based on a child’s life experiences. Children will pretend that opening and closing of boxes and bottle is part of their makeup routine or home based situation. The broad stair becomes a train as the prisms are organised in a sequence length-ways. Children talking to themselves during these activities bear witness to their imaginative play usually reflect their everyday life.

“No toys for the children, but houses for them; not toys for them, but land on which they can work with small tools; not dolls for the children, but real other children and a social life in which they can act for themselves” If a Directress loves nature and she loves life she can convey her reality to her class in a way that transforms lives. She can show them pictures or programs about nature, visit farms and zoos, and show books and magazines such as the national geographic and books on animals. She can show photographs of different parts of the world and the people that live in the places and what they eat and wear and how they live. She can have discussions with the children on places they have been to and what they observed there, she can ask then do an art piece about what they enjoyed most about a place they have visited or even they purposeful work that they are currently doing, this all aids the children with a sense what is real and they can use their imagination to build on those experiences. A child learns through purposeful work it is up to us as Directresses to guide the child.

To develop imagination a child needs, freedom of thought, movement and encouraged and permitted to discover new things. He needs order, a real world, no fantasy, sensorial materials, concrete materials, a full understanding and a healthy imagination. This will lead to Normalisation. Maria Montessori “was not totally against fantasy. But against nothing but fantasy”. 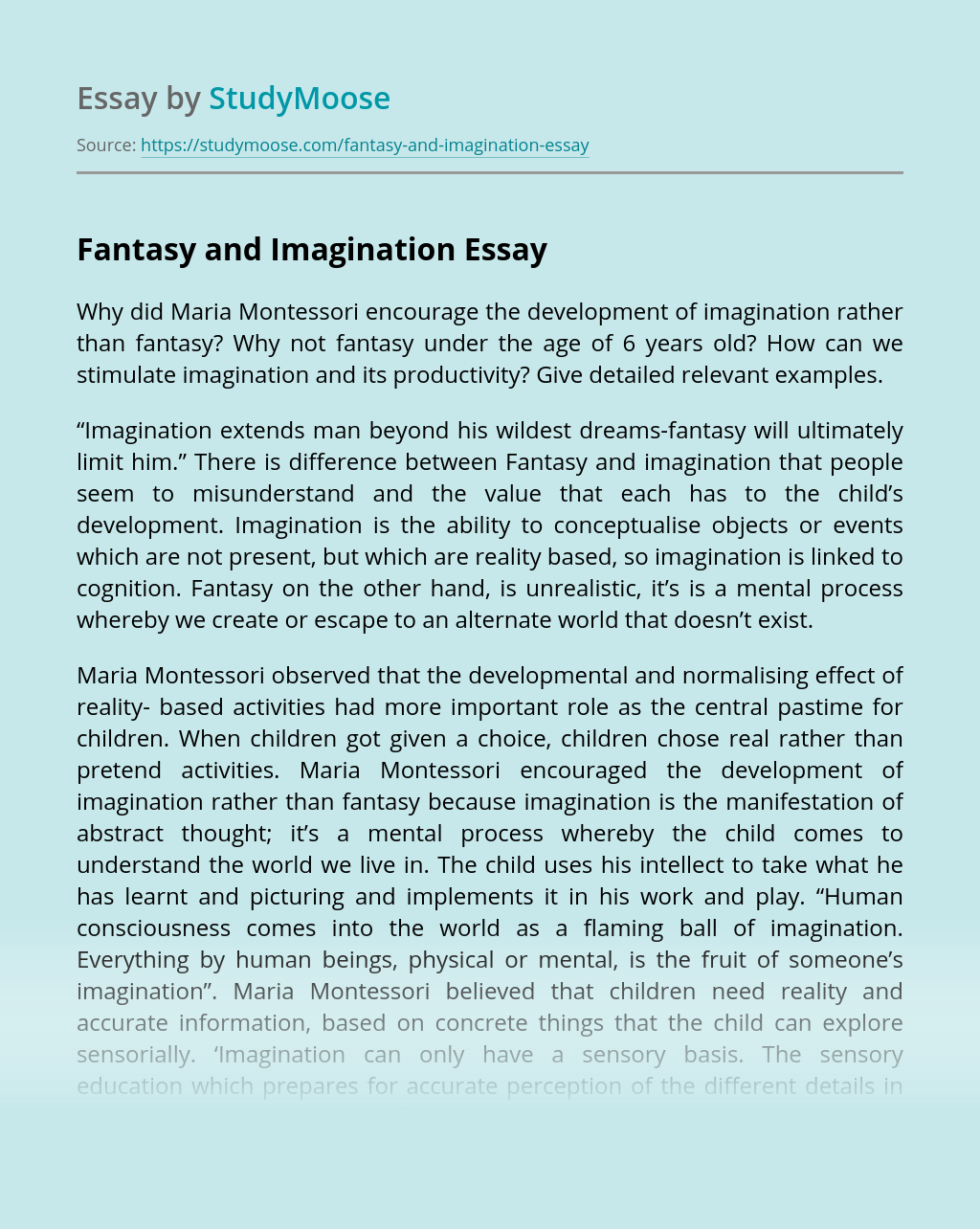 Don’t waste time
Get a verified expert to help you with Fantasy and Imagination
Hire verified expert
$35.80 for a 2-page paper
Stay Safe, Stay Original