The life and works of Dr. Maria Montessori

Maria Montessori, whose revolutionary approach to teaching changed the course of modern education. It is important background reading for parents considering Montessori education for their children, as well as for those training to become Montessori teachers. The first woman to win a degree as a Doctor of Medicine in Italy in 1896, Maria Montessori’s mission to improve children’s education began in the slums of Rome in 1907, and continued throughout her lifetime. Her insights into the minds of children led her to develop prepared environments and other tools and devices that have come to characterize Montessori education today.

Her influence in other countries has been profound and many of her teaching methods have been adopted by educators generally. She worked in the fields of psychiatry, education and anthropology. She believed that each child is born with a unique potential to be revealed, rather than as a “blank slate” waiting to be written upon. Her main contributions to the work of those of us raising and educating children are in these areas:

•Preparing the most natural and life supporting environment for the child
•Observing the child living freely in this environment
•Continually adapting the environment in order that the child may fulfill his greatest potential — physically, mentally, emotionally, and spiritually

LIFE AND WORKS THE EARLY YEARS

Maria Montessori was, in many ways, ahead of her time.

Born in the town of Chiaravalle, in the province of Ancona, Italy, in 1870, she became the first female physician in Italy upon her graduation from medical school in 1896.

Shortly afterwards, she was chosen to represent Italy at two different women’s conferences, in Berlin in 1896 and in London in 1900. In her medical practice, her clinical observations led her to analyze how children learn, and she concluded that they build themselves from what they find in their environment. Shifting her focus from the body to the mind, she returned to the university in 1901, this time to study psychology and philosophy. In 1904, she was made a professor of anthropology at the University of Rome.

HER RESOLUTE DEVOTION AND DADICATION

Her desire to help children was so strong, however, that in 1906 she gave up both her university chair and her medical practice to work with a group of sixty young children of working parents in the San Lorenzo district of Rome. It was there that she founded the first Casa dei Bambini, or “Children’s House.” What ultimately became the Montessori Method of education developed there, based upon Montessori’s scientific observations of these children’s almost effortless ability to absorb knowledge from their surroundings, as well as their tireless interest in manipulating materials. Every piece of equipment, every exercise, every method Montessori developed was based on what she observed children to do “naturally,” by themselves, unassisted by adults.

Children teach themselves. This simple but profound truth inspired Montessori’s lifelong pursuit of educational reform, methodology, psychology, teaching, and teacher training–all based on her dedication to furthering the self-creating process of the child. Maria Montessori made her first visit to the United States in 1913, the same year that Alexander Graham Bell and his wife Mabel founded the Montessori Educational Association at their Washington, DC, home. Among her other strong American supporters were Thomas Edison and Helen Keller.

WORLD WIDE ACCEPTACE OF HER METHOD

In 1915, she attracted world attention with her “glass house” schoolroom exhibit at the Panama-Pacific International Exhibition in San Francisco. On this second U.S. visit, she also conducted a teacher training course and addressed the annual conventions of both the National Education Association and the International Kindergarten Union. The committee that brought her to San Francisco included Margaret Wilson, the daughter of U.S. President Woodrow Wilson. The Spanish government invited her to open a research institute in 1917. In 1919, she began a series of teacher training courses in London. In 1922, she was appointed a government inspector of schools in her native Italy, but because of her opposition to Mussolini’s fascism, she was forced to leave Italy in 1934. She traveled to Barcelona, Spain, and was rescued there by a British cruiser in 1936, during the Spanish Civil War. She opened the Montessori Training Centre in Laren, Netherlands, in 1938, and founded a series of teacher training courses in India in 1939.

In 1940, when India entered World War II, she and her son, Mario Montessori, were interned as enemy aliens, but she was still permitted to conduct training courses. Later, she founded the Montessori Center in London (1947). In her later years, Dr. Montessori conducted training courses in Pakistan, London and the Netherlands. Montessori traveled worldwide for over 40 years, establishing training courses, lecturing, writing and promoting her principled method of learning. She was nominated for the Nobel Peace Prize three times–in 1949, 1950, and 1951. Maria Montessori died in Noordwijk, Holland, in 1952, but her work lives on through the Association Montessori Internationale (AMI), the organization she founded in Amsterdam, Netherlands, in 1929 to carry on her work.

MARIA MONTESSORI WAS A WOMAN FAR AHEAD OF HER TIME

Maria Montessori was a woman far ahead of her time, a visionary and a scientist. She developed a system of education, and a way of understanding and honoring children, that was based on scientific observation, seeing the child as he or she truly is. These principles of Montessori philosophy—such as the absorbent mind, sensitive periods, and intrinsic motivation—are confirmed by the most recent brain research about how children learn and how the brain develops. These principles have still not been assimilated into standard educational practice; in many ways Montessori remains ahead of our times. It was during that period, late in her life, that her view of cosmic education fully developed. She became committed to a global vision of humanity, arguing that only through right education of our children will world peace be achieved.

Once again she was ahead of her time, with this understanding of the planet as a whole, and a vision of the potential evolution of humanity. She was nominated for the Nobel Peace Prize several times. Since her death, Montessori education has flourished, with schools on every continent, and training centers worldwide. A diverse and sometimes competing group of Montessori organizations and training centers developed over the years. It is worthy of note that in the last decade there has been a strong and heartening move among some Montessorians, including the leaders of the largest organizations, to work together more.. In this second decade of the 21st century, a hundred years after her first “Casa,” Dr. Montessori’s insights and holistic method of education are more relevant and necessary than ever.

The life and works of Dr. Maria Montessori. (2016, May 05). Retrieved from http://studymoose.com/the-life-and-works-of-dr-maria-montessori-essay 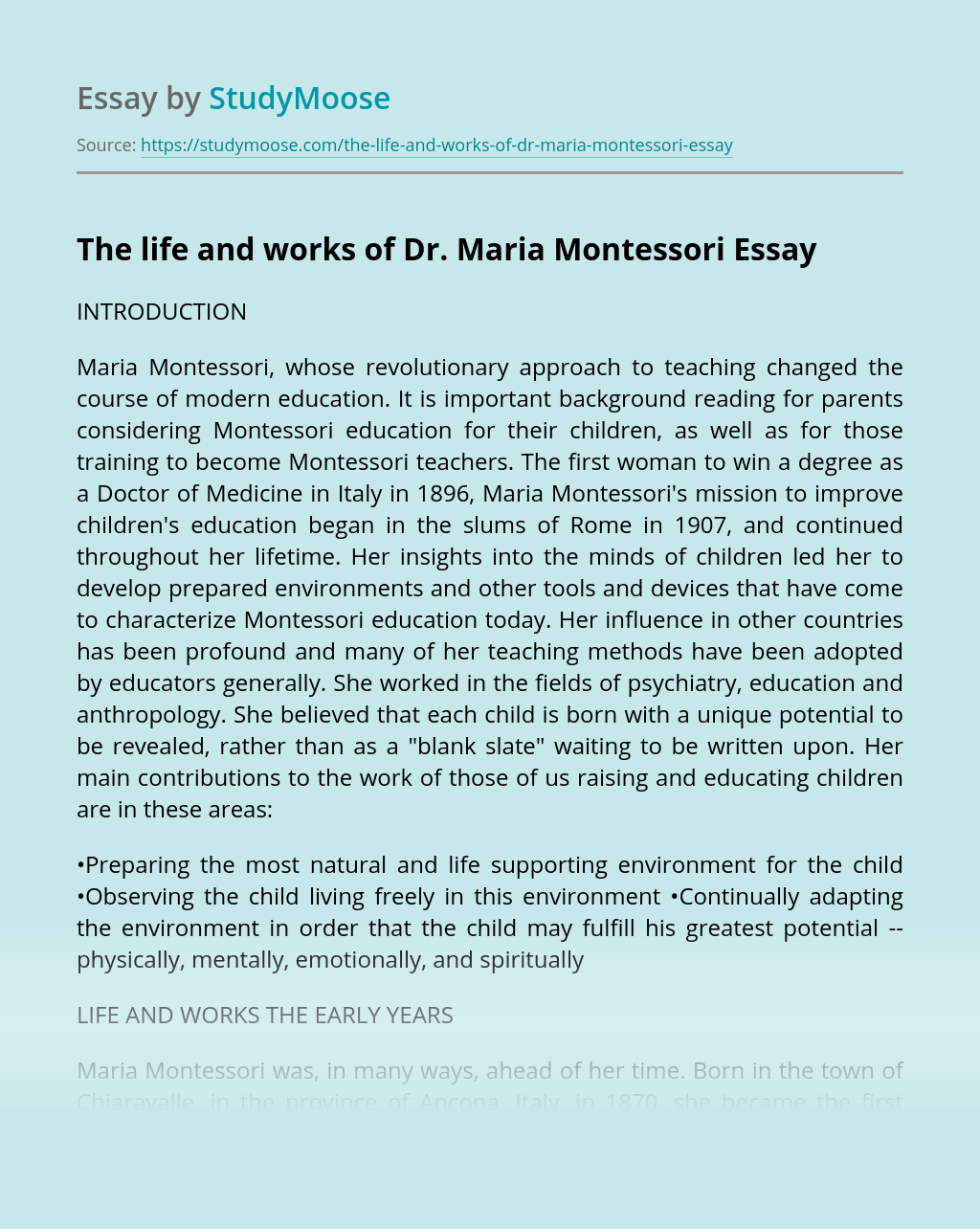 Don’t waste time
Get a verified writer to help you with The life and works of Dr. Maria Montessori
Hire verified writer
$35.80 for a 2-page paper
Stay Safe, Stay Original