Written by Rory McDowall Clark “Childhood in Society for Early Childhood Studies”, discusses a wide variety of topics regarding the true meaning of children in society. Rory McDowall Clark has an MA in Sociology: Contemporary Studies and her research interests include gender, cultural views of the child and continuing professional development (Clark, 2010, p. IV). Thus, resulting in an extremely informative and educated textbook divided into chapters discussing topics such as the history of childhood, the social policy of childhood and the global context of childhood.

Don't use plagiarized sources. Get your custom essay on
“ Childhood in Society for Early Childhood Studies ”
Get custom paper
NEW! smart matching with writer

Chapters one, five and nine are most certainly striking. As they explore the key themes of Childhood, Social Deprivation and the twenty-first-century child. Each of which these chapters are clearly labelled and laid out making it, in most cases, an easy read.

For many the true definition of “child” is in fact unclear. A child is a young person who is developing socially, emotionally, physically and cognitively (Clark, 2010, p.6). Equally, there can be many definitions and understandings of “Childhood”.

Clark successfully demonstrates the meaning of childhood throughout this chapter by providing factual evidence. Such as Steve Wagg: “Childhood, like so many other vitally important aspects of social life- gender, health, youth and so on- is socially constructed. It is, in other words, what members of societies, at times and places, say it is”. (Wagg, (1992, p.10) cited in Clark, 2010, p.7)

There is little denying that Clarks understanding of no two childhoods being the same is a breath of fresh air. The detailed explanations allow the reader to have a different perspective and understanding.

Unfortunately, certain childhood experiences can be badly influenced by social laws and regulations resulting in a complicated adulthood. The important message conveyed in this chapter is children do not control their childhood, society does. This chapter also included an “Activity” section which enabled the reader to imagine and practice certain scenarios. Most certainly a very effective aspect of the book.

The Author does not shy away from the cruel realities of social deprivation such as poverty in a child’s life and the gruelling consequences. Poverty affects children in all aspects of their lives from low birth weight·bad housing and·an unstable family situation (Clark, 2010, p.62). It is truly an eye-opener to learn how many children and their families are suffering with the effects of poverty daily. However, as informative as the statistical information is, one could argue there are too many figures and dates throughout the chapter. Therefore, making it a slightly difficult read. Such as, Government figures claim some success in removing children from poverty with numbers down from 3.4 million in 1998/9 to 2.9 million by 2006/7 (DCSF, (2009) cited in Clark, 2010, p. 62). As a reader, it could be rather confusing trying to grasp the various figures and dates. Although, in contrast, the strong point of this chapter is the clear layout. Each topic such as poverty and community development have large titles that breakdown the information visibly. This chapter would be aimed at those trying to research childhood poverty and help find a solution for social deprivation. Perhaps social workers, various charities and third-level students. Clark effectively highlights how children can play a positive part within their community. According to Nimmo (2008), it is vital that young children are involved within their community and voice their opinions, as many children spend countless hours in an Early year’s environment. Clarks way of thinking is simplistic yet truly thought-provoking.

This topic is very relevant today, given we are in the twenty-first century. Yet, have people really thought about the anxieties or pressures it brings to one’s childhood? Clark highlights this issue during this chapter. It becomes obvious that many, like Clark, feel the modern world is not negative merely the outlook on realities is. Many may disagree with this, as the modern world is growing at a rapid and dangerous rate. Children are no longer protected like they once were, they are exposed to many harmful aspects of life, such as, technology and supervision. Clark took a more persuasive style in this chapter, arguing the effects of today on children. However, many could agree that its not just the child’s environment but the childhood’s personality and outlook on situations. This helps them to grow and learn, the “modern world” cannot be solely blamed. This may have irritated the reader yet still excellently written with backed up points.

There is little denying that Rory McDowall Clark most certainly wrote an effective and well-educated book. There is no shortage of factual evidence and statistical information. It is an easily accessible book due to the visible layout and clearly labeled titles. The titles are in bold writing with a slightly bigger font making it noticeable for the reader. The bonus of this book is the summary included towards the end of each chapter; this enables the reader to grasp a greater understanding of what the chapter was about. This book also included a Theory focus section in certain chapters, which zoned in on various topics in a little more detail. Overall, there are very little weaknesses about this book, apart from the large number of figures and dates in one page and maybe the size of the writing could be a little bigger. Perhaps, some of the language used may be challenging to understand but this is only in small cases. Many readers, whether it be those in the education profession or students, will find Childhood in Society, to be an enjoyable and beneficial read. 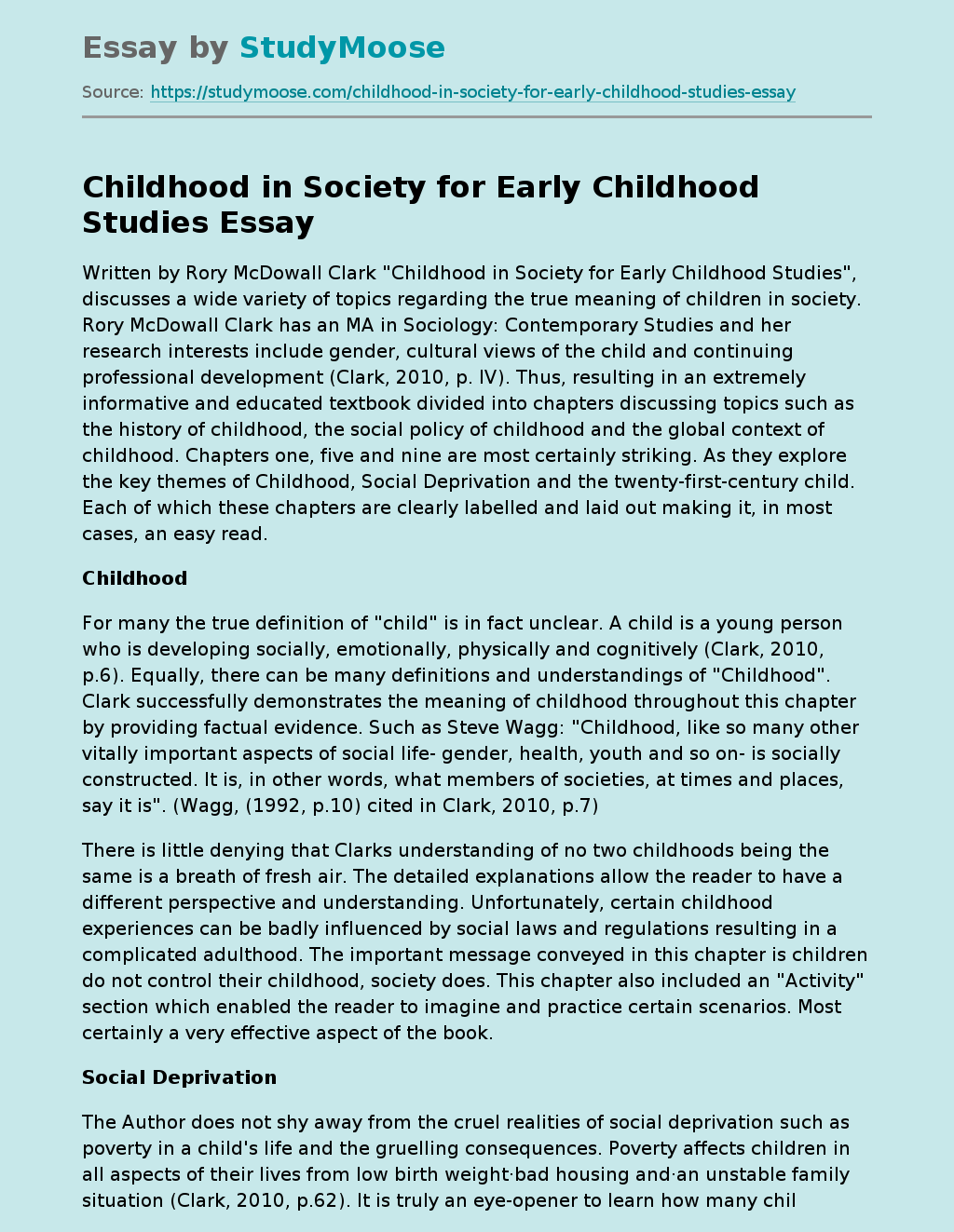