In Bruce’s bedrock principles, the first of the ten states: “The best way to prepare children for their adult life is to give them what they need as children.

Don’t waste time
Get a verified writer to help you with Tina Bruce’s Ten Principles for Early Childhood Education
Hire verified writer
$35.80 for a 2-page paper

” The core value statement for early childhood care and education states that, “Childhood in its own right.

Looking at both statements it can be seen how Bruce has influenced the core value statement. In Bruce’s, all three pioneers of early childhood practise Frobel, Montessori and Steiner say that childhood should not just be used for children simply to get ready for adult life. All three believed that childhood is important in its own right. “Childhood is a state to be protected and allowed develop without damage in a specially prepared environment.”(Bruce pp18) Childhood is a period when the basic fundamentals of life are introduced. Bruner used a spiral curriculum to teach children the basic of things that could be thought in more depth when the child is older. Bruner stressed that the early childhood practitioner should be preparing children for later learning and knowledge. Childhood is a stage in its own right but it also provides a foundation of knowledge for children to build upon and enter adulthood well prepared.

Number four of Bruce’s principles is “Children learn best when they are given appropriate responsibility, allowed to experiment, make errors, decisions and choices, and are respected autonomous learners.

Relationships with other people (both adults and children) are of central importance in a child’s life, influencing emotional and social well being. Core

Values parents, guardians and family as the child’s primary source of well being. In comparison there is little difference in the principle and core value they both see relationships with other people of importance to the child’s well being. Steiner saw the importance of interaction with other adults and children because the child takes in the moral atmosphere gave out by these people. Mothers were the first educators in a child’s life in Froebel’s eyes. He believed children first learned in the home then school.

He saw adults as helpers in children’s learning unlike Montessori, who saw adults including parents as a threat to children’s freedom. Frobel also saw the wider community as helping the child’s well being. The interaction with other children by playing helps the child’s state of well being by allowing them to develop physically, intellectually, emotionally, socially and morally.

This essay has looked at how Tina Bruce’s Ten Bedrock Principles have influenced the core value statements in Ireland. It has shown that even though the wording may differ in both, they both see the child as being an active learner and having the right to make decisions and errors. All learning in the early childhood care and education sector in Ireland should be child centred. Both the core value statement and Bruce’s ten principles see others including parents, guardians and family as helping the child’s well being. 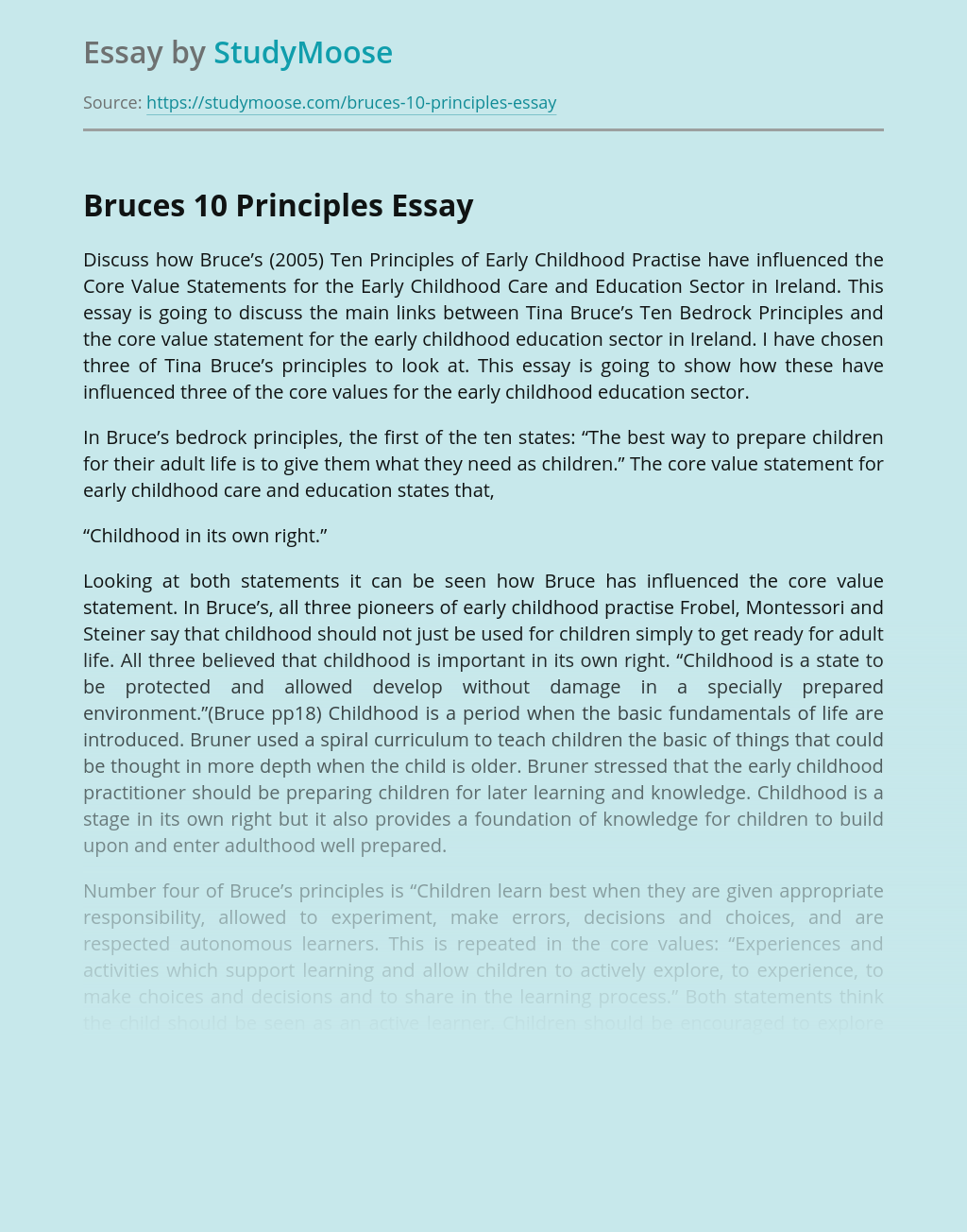