The need for scientific research methodologies that would bring about accurate and analytic research findings and results have put early childhood education scholars and researchers into the question of whether quantitative or qualitative methodology would best fit in the studies of phenomena (Shavelson and Towne, 2002). Needless to say, the debate in the early education research literature concerns the need for reliable and validated research studies in order to contribute to the existing literature as well as to aid in the policy making of educational institutions and the government (Cobb, et.

Don't use plagiarized sources. Get your custom essay on
“ Qualitative and Qualitative Research Methods in Early Childhood Education ”
Get custom paper
NEW! smart matching with writer

al. , 2003). However, the issue of using the quantitative or qualitative methods are still ambiguous for most educational researchers particularly on the issue of which is more scientific between the two (Berliner, 2002). This paper examines two research articles on early childhood education specifically on the promotion and acceptance of young children of their disabled peers in early childhood education. Specifically, the focus of this paper is on the methodological approach of the two articles (quantitative vs.

qualitative) and how these articles have contributed to the literature and understanding on the topic. Methods of Research in Early Childhood Education The approaches for the promotion for the acceptance of young children on their peers who are disabled have been an important issue in the inclusion of children with disabilities in regular early childhood education classroom. Two studies using two different research methodologies had explored the attitudes of young children as well as the means of improving their acceptance on young disabled children.

The first study conducted by Favarazza, Phillipsen and Kumar (2000) employed quantitative and qualitative research in answering the problem whereas; Batchelor and Taylor (2005) had used the qualitative approach alone.

Using the Acceptance Scale for Kindergarten (ASK), Favazza, Phillipsen and Kumar (2000) interviewed 48 kindergarten students and used pre-tests, post-tests and follow up in order to provide a reliable quantitative data from the purposive sampling that was done. The data obtained from their study were then collated and a quantitative analysis was made.

Consequently, a qualitative data analysis was made from the responses on the interviews that were conducted from the researchers. Hence, the authors used what is termed as the multi-method research approach wherein, quantitative data is verified and further analyzed through the use of qualitative data. The research findings revealed that teachers and their activities in the classroom can significantly impact on the levels of acceptance of young children on their disabled peers.

On the other hand, Batchelor and Taylor (2005) drawing upon the case study of a four year old with a moderate developmental disability had employed interviews, observation through the employment of programs such as the Stay, Play and Talk as well as social integration activities. Before the impact of the program was measured, the researchers had developed a baseline data in order to examine the degree of differences in the attitude of the children and the four year old subject on her peers.

The study revealed that social intervention programs can promote a more positive attitude from young children on their disabled peers as well as disabled children’s attitude towards their peers. Primarily, the similarity of Favarazza, Phillipsen and Kumar’s (2000) and Batchelor and Taylor’s (2005) articles includes their use of interviews in order to expound and further analyze the data they have on hand. For instance, both authors had interviewed the teachers of the children in order to determine the attitudes of the children on their disabled peers.

Second, both articles had used observation in their analysis- while Batchelor and Taylor (2000) had used observation more extensively than avarazza, Phillipsen and Kumar’s (2000), their recorded observations were significant part of their analysis of the issue. Finally, the result of the studies of both articles is similar: that the attitudes of young children on their disabled peers are positively influenced by the social interaction programs that are implemented by the teachers and the schools.

Consequently, both articles contributed greatly to the understanding of the ways to promote positive attitude in inclusive early childhood education programs. While there had been similarities between the two articles, there are more differences in terms of orientation and methodological approach. First, Favarazza, Phillipsen and Kumar (2000) used a qualitative-quantitative method of inquiry- employing both quantitative and qualitative method through the use of a standardized survey (ASK survey), interviews and observation.

On the other hand, Batchelor and Taylor (2005) utilized the qualitative approach alone employing a case study approach of one four-year-old girl. Hence, the primary instrument used in their study is observation and report notes including interviews made to the teachers of the child. With the different methods used, the article of Batchelor and Taylor (2005) provided a more in-depth study in the psychological and social impact of social activities in the promotion of positive attitude of young children on their disabled peers.

For instance, Batchelor and Taylor (2005) were able to discuss and evaluate the responses of the child on specific activities at different points in time. Hence, the degree of the exploration of the authors on the child’s psychological aspect has been deeper than the results outlined in the study of Favarazza, Phillipsen and Kumar (2000). However, while the case study rendered a better discussion of the psycho-social impact of social activities programs, the study of Favarazza, Phillipsen and Kumar (2000) provides a broader and more general view of children’s responses to their disabled peers.

Drawing from forty eight (48) respondents, the authors were able to capture not just an individual response but rather a more generalized response. The use of a bigger population is necessary in order to plot differences and similarities in attitudes- something that was not accomplished in the study of Batchelor and Taylor (2005). Consequently, the use of a standardized survey served not just an empirical purpose but also a theoretical purpose. The study of Favarazza, Phillipsen and Kumar (2000) was able to validate the ASK survey.

Hence, the study provided not only empirical significance but theoretical significance as well. Second, the quantitative-qualitative approach of Favarazza, Phillipsen and Kumar (2000) can be considered to be more rigorous and hence, more scientific than that of Batchelor and Taylor’s (2005) study. This is because the study of the former had used pre-tests, post-tests as well as follows up tests in order to evaluate the effectiveness of the survey measure in determining the validity of the opinions expressed in the survey questionnaire.

Consequently, the perspectives that were solicited in the study of Favarazza, Phillipsen and Kumar (2000) had come from several numbers of students and teachers while that of Batchelor and Taylor’s came from some teachers and one student alone. Suffice it to say, the attitude of the young children on their disabled counterparts cannot be accurately described and explained by the teachers- it is the students themselves who can accurately express their perceptions and feelings. However, it should be noted that both studies had been objective in recording their observations through careful record keeping.

Finally, as concurred by Batchelor and Taylor (2005) in their study, the case study is limited in scope because it only employed one child hence, the need to further explore the topic by including more children. On the other hand, there is a need for Favarazza, Phillipsen and Kumar (2000) to provide a more detailed study on the psycho-social impact of social promotion programs of the children. The method of employing record keeping and direct observation by Batchelor and Taylor (2000) had been effective and important measures in order to provide a deeper psycho-social analysis of young children.

Analysis Qualitative and quantitative research methods had been traditionally been seen as poles apart in terms of administration, instruments used as well as the depth and degree of analysis that they contribute in education researches. However, while the difference between these two methods had been pronounced in earlier literature, contemporary research methods in education (McMillan, 2008) recognizes that quantitative and qualitative research methods can be used in conjunction with one other- one can actually validate the other.

Consequently, the qualitative-quantitative method was able to provide a more generalizable study because of the scope of its respondents whereas the qualitative study through the use of case study of one person is limited- particularly on the issue that it cannot be argued that it is representative of the population. Moreover, a case study would be highly dependent on the individuality of the participant hence; the result would more likely be different with a person in the same situation.

However, in the quantitative-qualitative study, the validity of the findings are more general and hence, more acceptable because it was not confined to one person alone but on a sample that is representative of a given population. While the quantitative-qualitative approach is generally seen as more valid, the qualitative study of Batchelor and Taylor (2005) provided deeper analysis on the behavior and the changes that can be made on a young child. By focusing on one person, the authors were able to provide a holistic approach in studying the psychological responses of the child in social interaction programs and activities.

Quantitative and qualitative approaches both have their strengths and weaknesses- the goal of early childhood researches are to determine the most appropriate method to be used in the questions that are being ask. Suffice it to say, there is no inferior or superior research method but rather it would depend on the science, objectiveness and the devotion of the researchers to answer the questions. Hence, valuable scientific findings can be found in both modes of inquiry. References Batchelor, D. and Taylor, H. 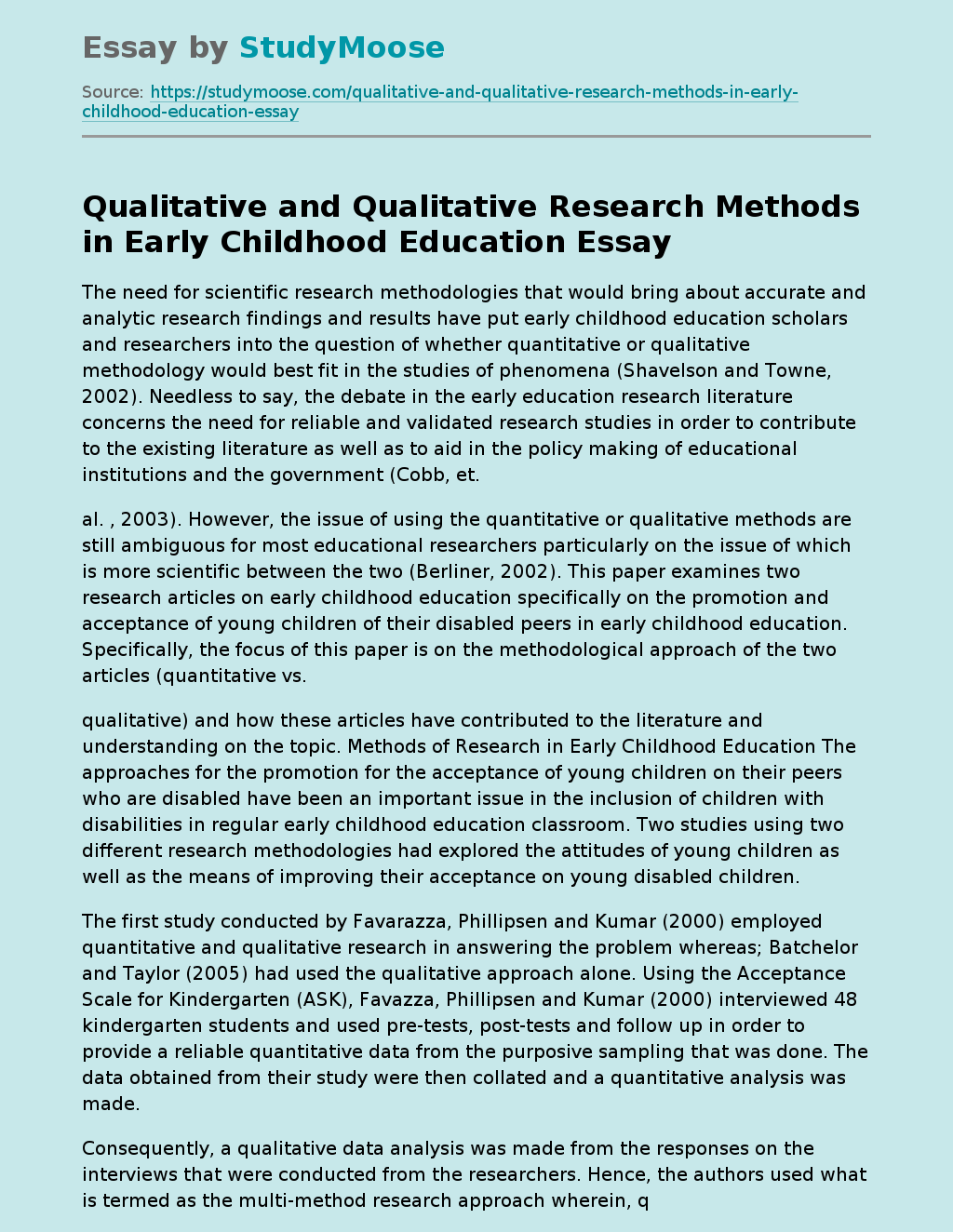