Fabliau genre in The Miller's Tale

Compare and Contrast the characters of Absolon and Nicholas and assess their contribution to the comedy of the fabliau genre in The Miller’s Tale The fabliau genre is a medieval French literary invention that depicts bourgeois characters in satirical or openly humorous plots. These brief comic tales in verse, involving unlikely and complex deceptions, are usually ‘scurrilous, scatological or obscene’ (The Riverside Chaucer).

Chaucer employs the traditional form of the fabliau in the tale that proceeds the Knight’s; The Miller’s Tale.

Don't use plagiarized sources. Get your custom essay on
“ Fabliau genre in The Miller’s Tale ”
Get custom paper
NEW! smart matching with writer

Within the prologue and tale, several characteristics and defining factors of the genre style such as; unintended versus intended outcomes, practical jokes, slapstick, irony and farcical developments are used in relaying the satirical story of a husband cuckolded by his wife and lodger.

The particular natures of the characters involved are obviously a determining influence in how the fabliau is to unfold. The young sexual intruder, Nicholas, is typically a student or cleric and thus belongs to no definable class.

The Chaucer tales therefore were not simply a middle and lower class diversion; elite audiences of Chaucer’s time appreciated the tales, for painting condescending and vulgar portraits of the lower orders. Humour and satirical value are inevitably key threads in the fabliau tapestry network.

However it is the specific type of humour that identifies itself with the genre. A strong sense of mockery and repartee are made towards often-defenceless characters and personality traits. The superstitious, ingenuous, kind-hearted and above all foolish are treated with ridicule and derision.

Within The Miller’s Tale, we see that John the carpenter for example is cruelly mocked and deceived for his gullible actions. The narrator constantly rebukes the character for his ignorance (both of Cato and of common sense) and for his pride in this “blessed be alwey a lewed man.”

A ‘bawdy’ and amoral quality is also characteristic of the fabliau humour. Due to this, from the outset of the Prologue, a sharp contrast in tone is noticed between the tale about to be told and the chivalric, gallant speeches of The Knight’s Tale. References of a sexual nature, whether these are implicit or explicit, are certainly not found in the realms of young Thebans of royal blood Palamon and Arcite and the demure, chaste Emily. This juxtapositioning of the two tales is an important factor, which serves to emphasise intentional parodies and contrasts between secular and non-secular in the farce. Ideals and aristocratic principals such as effictio, love service and chastity, are also not safe from this parodying between the tales. The characters in The Miller’s Tale therefore become ‘pastiches’ of their more noble counterparts from the previous tale; a factor which heightens their humorous nature.

Lastly, the realism of fabliau is setting, is crucial in allowing seemingly unimportant details mould and add to the farcical situation leading to eventually hilarious spiralling consequences. Specific details concerning employment of the characters are included. It is pivotal, for example in the tale, that John the ‘riche gnof…of his craft…was a carpenter’ so that there are legitimate and believable reasons for him to visit ‘Oseneye’ and for a plan to develop. There are also descriptions of the dwellings, which are in turn emphasised by humble and domestic language or phrasing.

The Miller’s Tale takes the listeners to the semi-rurality of ‘Oxenford’. It is interesting to note that ‘hende Nicholas’ is introduced within four lines of the tale’s beginning; ultimately suggesting that he is an important character. It may also be observed that because John is not given any description of character, appearance or occupation and due to prompt switching to the ‘poure scoler’, that the carpenter is intended to be perceived, throughout the tale, as secondary. This also provides and intimation as to which character is to be the ‘fabliau victim’.

Nicholas is instantly described as knowledgeable who ‘turned for to lerne astrologie’. This is seen as a respectable branch of learning, however ‘hende’ Nicholas is aware of its potential power over others and is able to supplement his income by ‘demen’ and predicting the weather. In line 89 it describes how Nicholas can answer anything ‘if men asked him what sholde bifalle.’ The word befall is a subtle hint as to John’s fate. It is interesting to note that Nicholas is the ‘marle-pit’ in which the carpenter will ‘yfalle’ (lines 351-352).

Fabliau genre in The Miller's Tale. (2017, Nov 03). Retrieved from https://studymoose.com/fabliau-genre-in-the-millers-tale-essay 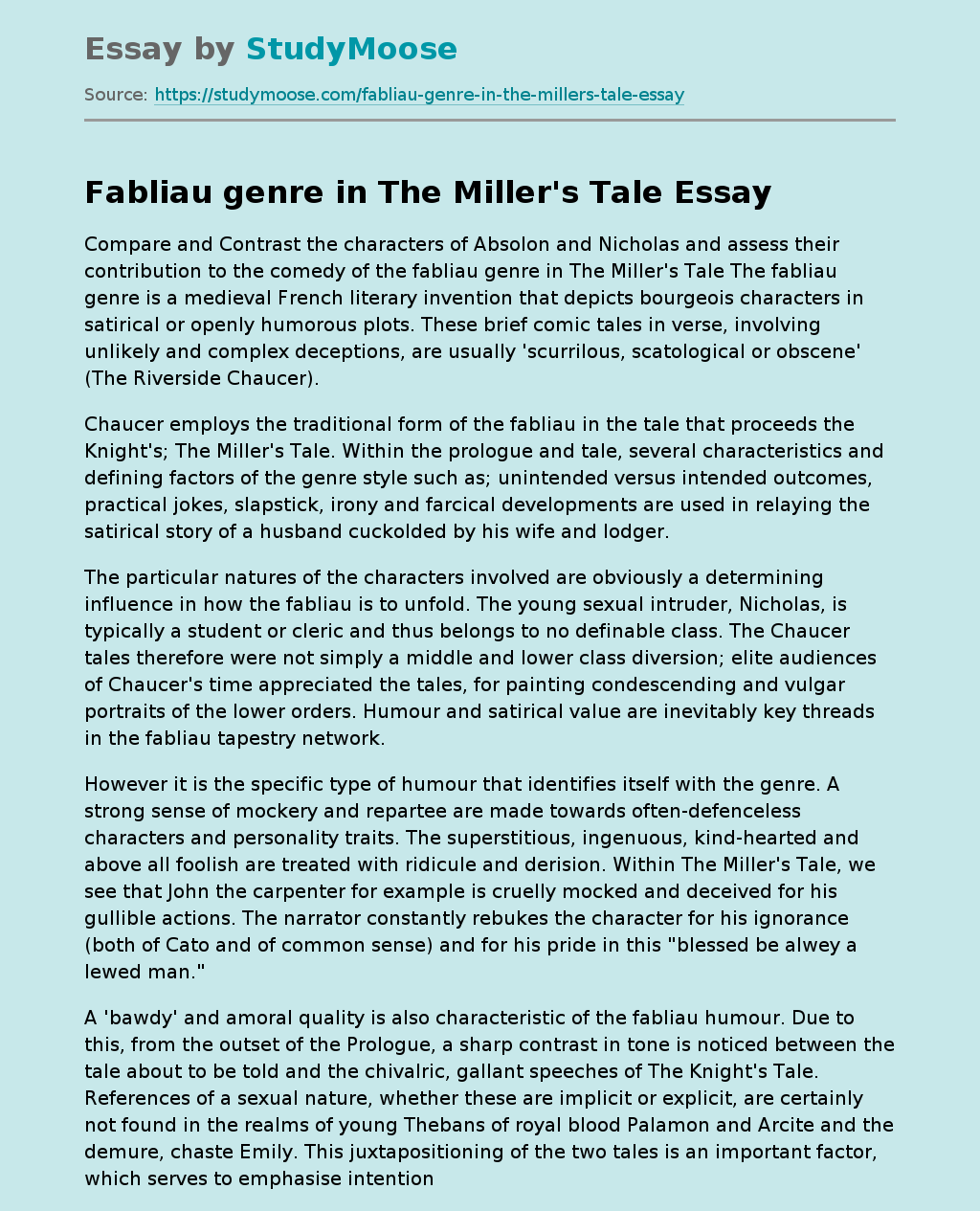