Nicholas, with his outrageous sense of humour and eager pursuit of love, functions as the charming, likeable hero in Miller’s Tale. He is introduced as “hende Nicholas”, and his conduct does not at all answer to the usual sense of the adjective which implies great courtesy, but its suggestion of approval is repeatedly invoked as the Miller refers to his hero by this formula. We learn at once that he is knowledgeable and of his interest in astrology. This is seen as a respectable branch of learning, but Nicholas is aware of its power to impress others, while he is able to supplement his income by weather-forecasting.

Don't use plagiarized sources. Get your custom essay on
“ Character of Nicholas in Chaucer’s Miller’s Tale ”
Get custom paper
NEW! smart matching with writer

He is also helped financially by friends. The imaginary flood of which Nicholas tells John shows us his cunning, his confident attitude, his inventiveness and especially his contempt for the stupid tradesman: ‘Don’t worry about that,’ said Nicholas, / ‘His time’s been badly wasted, if a scholar / Can’t get the better of a carpenter.

In spite of this, however, the Miller presents the astrologer in a way that makes the audience like Nicholas. He does this by making John seem deserving of punishment for his unwise marriage and subsequent jealousy. Nicholas’s youth and attractiveness makes us less critical of his boldness, and the comic manner of the tale’s telling makes his conduct seem less worthy of censure than would be the case with real people. Nicholas seems a more appropriate partner for Alison than does John, and the Miller’s repetition of the formula “hende Nicholas” encourages us to be more sympathetic.

However, it is important to note that Nicholas does not escape his daring plan without any consequences. His over-confidence and lack of prudence earn him a punishment appropriate to his offence, and in keeping with the farcical spirit of the tale he is “scalded in the towte” by his rival, who mistakes him for Alison. Thus, Nicholas may be the character that has the audience rooting for him by being likeable and providing good laughs, but his charming yet arrogant attitude does not prevent him from suffering the consequences of his actions. 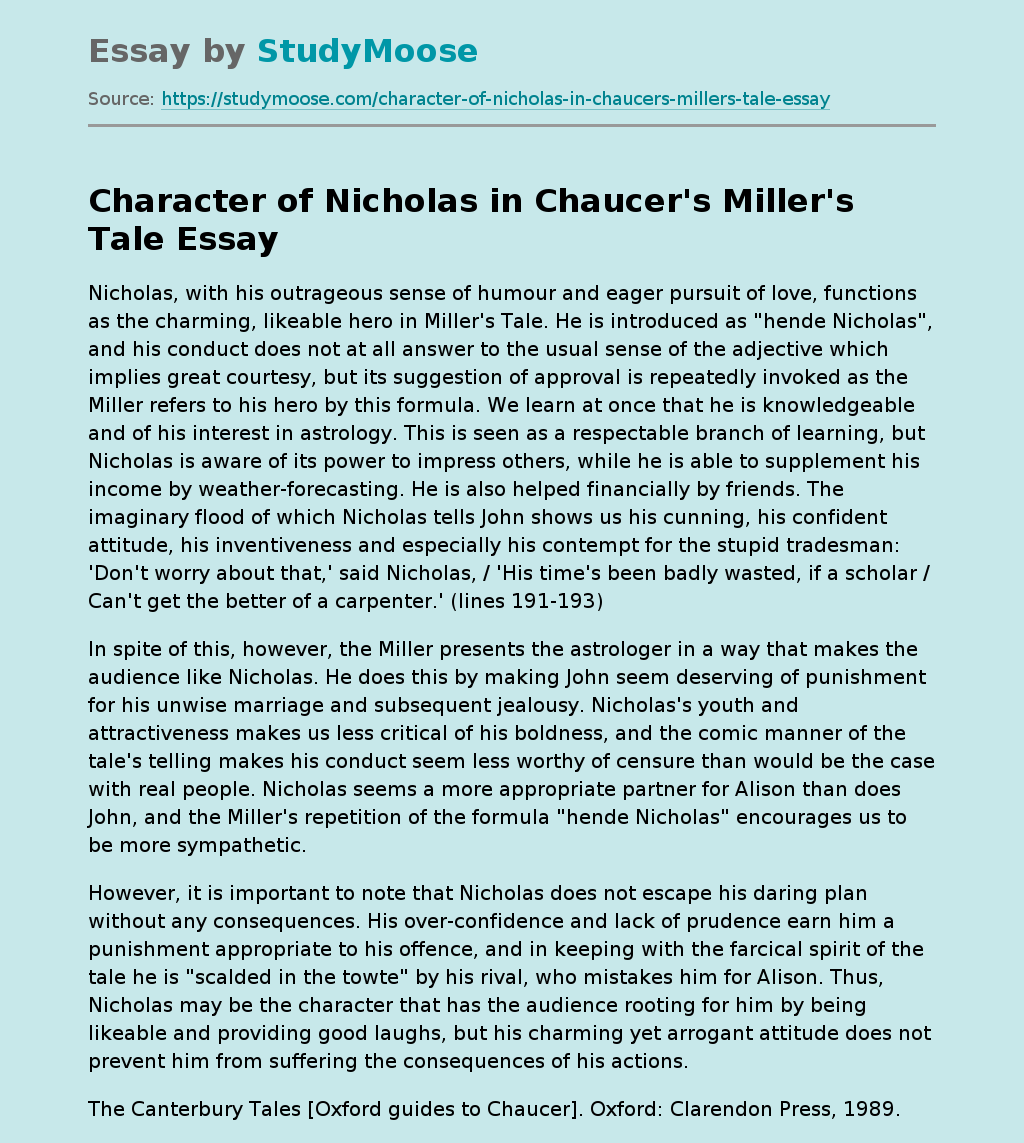