For centuries, mariners have spread stories about giant sudden waves which appeared out of nowhere without warning which were strong enough to capsize even the mightiest and largest ships. Several vessels—such as the S. S. Waratah, the M. S. Munchen, and the S. S. Edmund Fitzgerald—were all rumored to have been sunk by rogue waves (Walsh par. 3).

Further, rogue waves have been blamed for ripping the bow off of a Norwegian freighter near the tip of South Africa in 1974, almost capsizing the Queen Elizabeth in 1942 off the coast of Greenland, striking the Queen Elizabeth H in 1995, and for swamping military aircraft carriers and tearing tankers in half (McDonald A21).

Turn in your highest-quality paper
Get a qualified writer to help you with
“ Rogue Waves as Natural Disasters ”
Get high-quality paper
NEW! AI matching with writers

These waves have also been immortalized in popular culture, as evidenced by the 1972 film The Poseidon Adventure and its 2006 remake Poseidon.

These huge waves are called rogue waves—or monster or freak waves—and can be encountered during bad weather storms or even in calm seas, but the fundamental aspect is that they appear with little warning.

The biggest problem is the lack of scientific data from shipboard measurements of such waves because of their propensity to appear quickly and without warning. Rogue waves can also disappear as quickly as they form. Scientists have been studying the formation and characteristics of rogue waves with the goal of creating an accurate prediction and detection method to mitigate the potential damage of these waves.

Generally, ocean waves are created by “random pressure fluctuations in the turbulent wind … [and] reinforced in a feedback process that involves the airflow over the wavy surface” that creates a wave’s crests and troughs which travel at the wave’s phase speed (Garrett & Gemmrich 62).

In other words, waves are created when the wind produces a ripple across the surface of a body of water that increases with the wind’s intensity and speed. Waves can also interact with currents, seabeds, and coastal features of shallow waters (Wallace par. ). Initial waves are relatively short and succumb to wind pressure; however, interactions between multiple waves have the potential to transfer energy into creating longer and faster ones. As the wind increases in strength and duration, waves become larger and longer and the variations in different wavelengths produce the appearance of a turbulent and rough sea. Waves tend to travel at the “group speed”—defined as “half the phase speed for all but the shortest waves” (Garrett & Gemmrich 62).

Hurricanes can increase the wave amplification to a few stories; however, rogue waves can be as high as ten stories. Accordingly, rogue waves occur when a regular wave “exceed[s] the surrounding waves by a certain proportion” (Perkins 328). The basis for comparison is significant wave height—an oceanographic parameter calculated by “taking the average of the tallest one-third of the waves in a particular patch of ocean” (Perkins 328). Consequently, scientists classify a wave as a rogue if it is “2. 2 times as tall as the significant wave height” (Perkins 328).

Rogue waves can range from 20-foot waves which suddenly appear in two- to three-foot surf as was the case in Daytona Beach, Florida in 1992 to over-100-foot waves during a nor’easter with 20-foot swells (McDonald A21). Basically, rogue waves are those waves which “don’t fit the pattern” (McDonald A21). Rogue waves also differ from “regular” waves in their shape. Whereas regular waves have “the approximate shape of a smoothly curving sine wave”, rogue waves’ profiles are more divergent from this sine wave with much higher crests and deeper troughs which have been described as “mountains of water” and “holes in the sea” (Perkins 328).

Some mariners who have experienced rogue waves describe these troughs as riding a down elevator. Further, rogue waves differ from tsunamis and tidal waves in that the latter are both extremely rare instances which are caused by an earthquake, volcanic eruptions, or landslide which displaces a large volume of water, thus creating a single large wave whereas rogue waves are more of a more regular and fundamental property of the sea (BBC par. 8; McDonald A21). Moreover, tsunamis are relatively small waves in height but long in length whereas rogue waves are inordinately tall.

Rogue waves are particularly prominent off the southern coast of South Africa in the imaginary boundary between the Atlantic and Indian Oceans on the edge of the Agulhas Current where one’s chance of encountering a rogue wave is estimated at about 3. 1% per hour (Perkins 328). These waters are not only geographically complicated but also highly dynamic in that the current flows from the northeast while prevailing winds in the area blow from the southwest (Perkins 328). This opposition creates winds striking the faces of tall, current-driven waves, thus increasing their height.

However, rogue waves are also prominent in South America despite drastic differences in sea conditions there. Data from the region suggest that rogue waves can also occur in relatively calm seas. Researchers found rogue waves when the significant wave height was 12 meters as well as when it was only 50 centimeters (Perkins 329). In addition to South Africa and South America, scientists have determined that rogue waves are also more likely in Norway and parts of the Pacific Ocean (BBC par. ). Scientists used to believe that rogue waves could appear at any particular area of ocean only once every several millennia; however, recent oceanographic data suggest these waves are far more common than originally believed (Perkins 328). Early scientific models suggested that any particular spot in any ocean should encounter a rogue wave approximately every 10,000 years or so; however, as mentioned, emerging data suggests that these waves occur far more frequently (Perkins 328).

Data obtained in 1995 by a North Sea oil rig recorded an 84-foot-high (25. 6 meters) wave that appeared out of nowhere while in 2000 a British oceanographic vessel recorded a 95-foot-high (29 meters) off the coast of Scotland, thus giving credence to these sailors’ tales (Walsh par. 4). Similar data obtained by the European Space Agency in 2004 in its MaxWave project that utilized satellite data to illustrate 10+-story high rogue waves further confirmed their existence (Walsh par. ). Further, data obtained by Dr. Wolfgang Rosenthal of Germany’s GKSS Research Centre suggests that as many as ten rogue waves exist across the world’s oceans at any one time (Wallace par. 5). Underestimation of rogue waves’ frequency in the scientific community was a direct result of the presumption that real ocean waves behave the same as mathematically ideal waves defined by the principle of linear superposition (Perkins 329).

In other words, the assumption was that if two hypothetical one-meter-tall waves crossed each other’s path they would briefly form a two-meter-tall wave; however, in reality these waves typically join to create a wave which is “larger than the sum of its parts” (Perkins 329). Compounding the problem is that while large waves have been recreated in tanks of water to approximate rogue waves, establishing a universal mathematical equation that describes their formation, shape, and speed is quite difficult.

Perhaps the closest success was the application of nonlinear Schrodinger equations by mathematician Howell Peregrine in 1983 that demonstrated that “pulselike waves called Peregrine solitons can pop out of sine waves under certain conditions” (Powell 12). Peregrine’s application of mathematics to ocean waves has demonstrated how the wind could generate certain modulations in open waters which could produce rogue waves and has opened a new door of research for physicists and oceanographers.

Granted, circumstances in a carefully-controlled lab experiment are different than in nature; however, Peregrine’s formulaic applications have significant promise for future study. Since 2009 scientists from Harvard University and Tulane University have been examining patterns of microwaves—instead of water waves—in the hope of better understanding how rogue waves may arise by creating a laboratory-based metal platform that measures about 10 inches by 14 inches and which contains around 60 small brass cones “to mimic the effect of unexpected ocean eddies in the current” (Walsh par. ).

Accordingly, when microwaves are directed at the platform, hot spots emerged which represent the microwave equivalent of rogue waves. Further, these hot spots appeared as many as 100 times more frequently than former wave theory would have predicted, thus indicating that rogue waves are far more common than once believed and lending greater explanation as to why a large number of large ships sink in the absence of inclement weather (Walsh par. 7).

Despite a current lack of accurate prediction of rogue waves, new and innovative mathematical analyses have proved successful in demonstrating how some rogue waves form, as well as how long they last before dissipating, by demonstrating that rogue waves both form and recede more readily than both past research and marine lore had formerly indicated (Perkins 328). Accordingly, scientists have grasped a better understanding of how to actually better predict where such waves may appear.

One scientific mechanism which has assisted current research is the Benjamin-Feir (BF) instability, discovered in the 1960s, that attempted to create a perfectly regular series of waves in a wave tank under the hypothesis that a regular series of waves will always become irregular and some waves will be higher than others (Garrett & Gemmrich 63). Application of the BF instability provides one theory to explain the existence of rogue waves; however, such an explanation is not all-inclusive and only accounts for a small portion of occasional rogue waves. 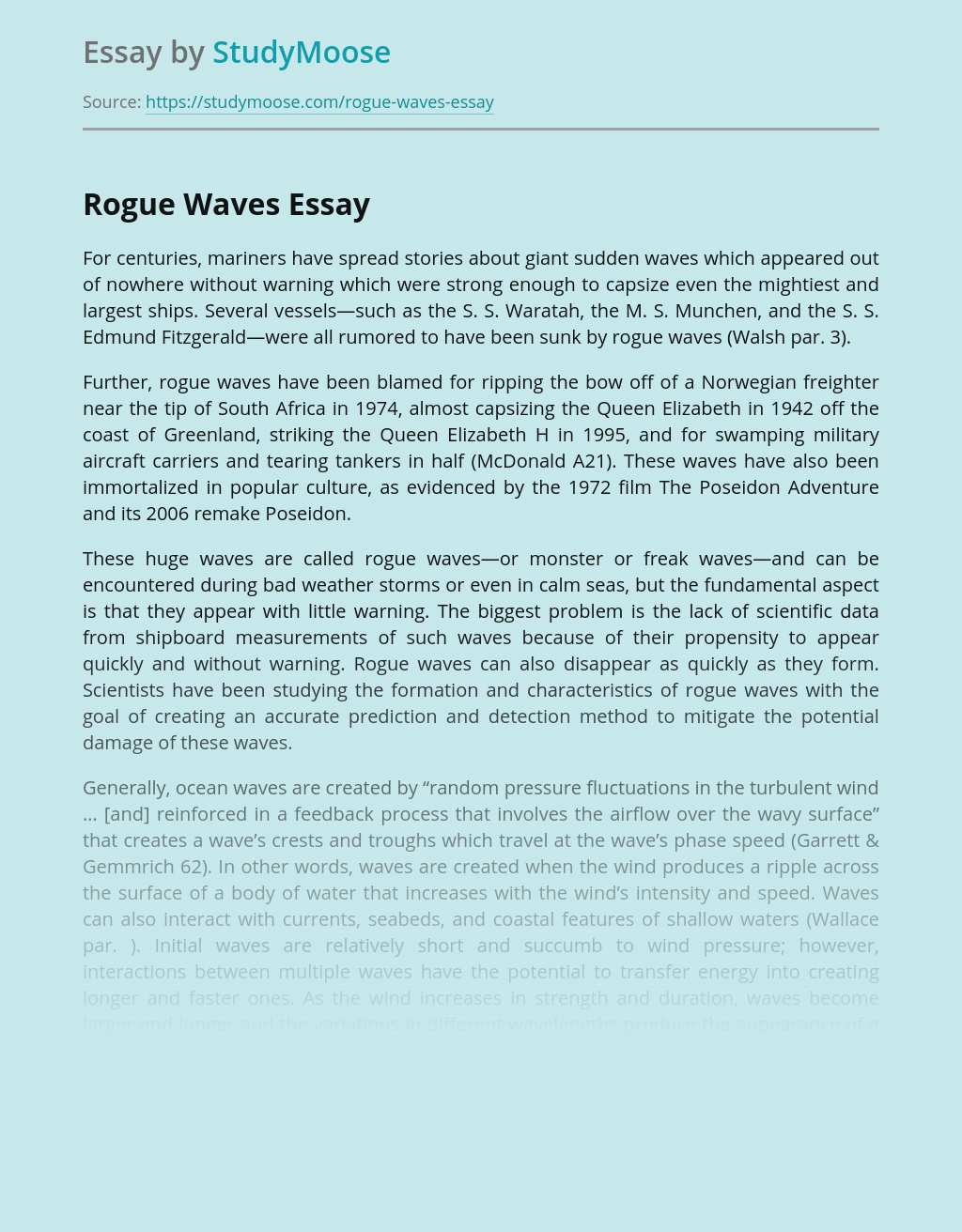 Turn in your highest-quality paper
Get a qualified writer to help you with
“ Rogue Waves as Natural Disasters ”
Get high-quality paper
Helping students since 2015
Stay Safe, Stay Original