A natural hazard is a threat of a naturally occurring event will have a negative effect on humans. This negative effect is what we call a natural disaster. In other words when the hazardous threat actually happens and harms humans, we call the event a natural disaster. Natural Hazards (and the resulting disasters) are the result of naturally occurring processes that have operated throughout Earth’s history. Effects of Hazards

Hazardous process of all types can have primary, secondary, and tertiary effects.

Don't use plagiarized sources.
Get Your Custom Essay on Natural Hazards and Disasters Just from $13,9/Page

Tertiary Effects are long-term effects that are set off as a result of a primary event. These include things like loss of habitat caused by a flood, permanent changes in the position of river channel caused by flood, crop failure caused by a volcanic eruption etc. Vulnerability to Hazards and Disasters

Vulnerability refers the way a hazard or disaster will affect human life and property Vulnerability to a given hazard depends on: Proximity to a possible hazardous event
Population density in the area proximal to the event
Scientific understanding of the hazard
Public education and awareness of the hazard
Existence or non-existence of early-warning systems and lines of communication Availability and readiness of emergency infrastructure
Cultural factors that influence public response to warnings
Construction styles and building codes
There are three main types of “earthquake proof” building structures, all used in Japan over the past decade. The first has a heavy concrete weight on the top of a building that, activated by computer-controlled dampers, is shifted across the roof to counteract the force of the earthquake; however, a power cut could stop this sophisticated system working.

The second employs shock absorbers, normally a sandwich rubber composition that acts as a form of suspension; this is suitable for buildings up to 15 storeys. The third method, represented by Foster’s Century Tower in Tokyo, is the eccentrically braced frame. “This”, says Ed Booth of the engineers Ove Arup and Partners, “has steel braces providing stiffness for moderate earthquake motions, but a sacrificial ductile shear link between braces designed to yield in an intense earthquake, absorbing seismic energy and acting as a fuse which prevents the braces from buckling.” “But, earthquake engineering”, adds Mr Booth, “is still a relatively new field.

During this century more than 1.5 million people have lost their lives as a result of earthquakes and the vast majority of this toll because of buildings that have collapsed through unsuitable design.” “I telephoned my parents in Kobe”, says “Mog” Morishima, a Japanese architect working in London, “and they tell me that many of the new buildings on Port Island, a major land reclamation project in the Eighties, have survived. These include the Port Opia Hotel, the tallest building in the area. This is where you can find many new fashionable buildings designed by architects like Tadao Ando and Frank Gehry; it seems that new methods of construction and the new building regulations established in 1971 and revised in 1980 have saved many buildings and, so, many lives.” (The Atlantic, MAR 11, 2011)

In general, less developed countries are more vulnerable to natural hazards than are industrialized countries because of lack of understanding, education, infrastructure, building codes, etc. Poverty also plays a role – since poverty leads to poor building structure, increased population density, and lack of communication and infrastructure.

location of buildings, highways, and other infrastructure in the areas subject to hazards potential exposure to the physical effects of a hazardous situation the vulnerability of the community when subjected to the physical effects of the event. Risk assessment aids decision makers and scientists to compare and evaluate potential hazards, set priorities on what kinds of mitigation are possible, and set priorities on where to focus resources and further study.

Prediction and Warning
Risk and vulnerability can sometimes be reduced if there is an adequate means of predicting a hazardous event.  Volcanic eruptions are usually preceded by a sudden increase in the number of earthquakes immediately below the volcano and changes in the chemical composition of the gases emitted from a volcanic vent. If these are closely monitored, volcanic eruptions can be often be predicted with reasonable accuracy. In the prediction of earthquakes, the word forecast is used in a much less precise way – referring to a long-term probability that is not specific in terms of the exact time that the event will occur.

Natural Hazards and Disasters. (2016, May 06). Retrieved from https://studymoose.com/natural-hazards-and-disasters-essay 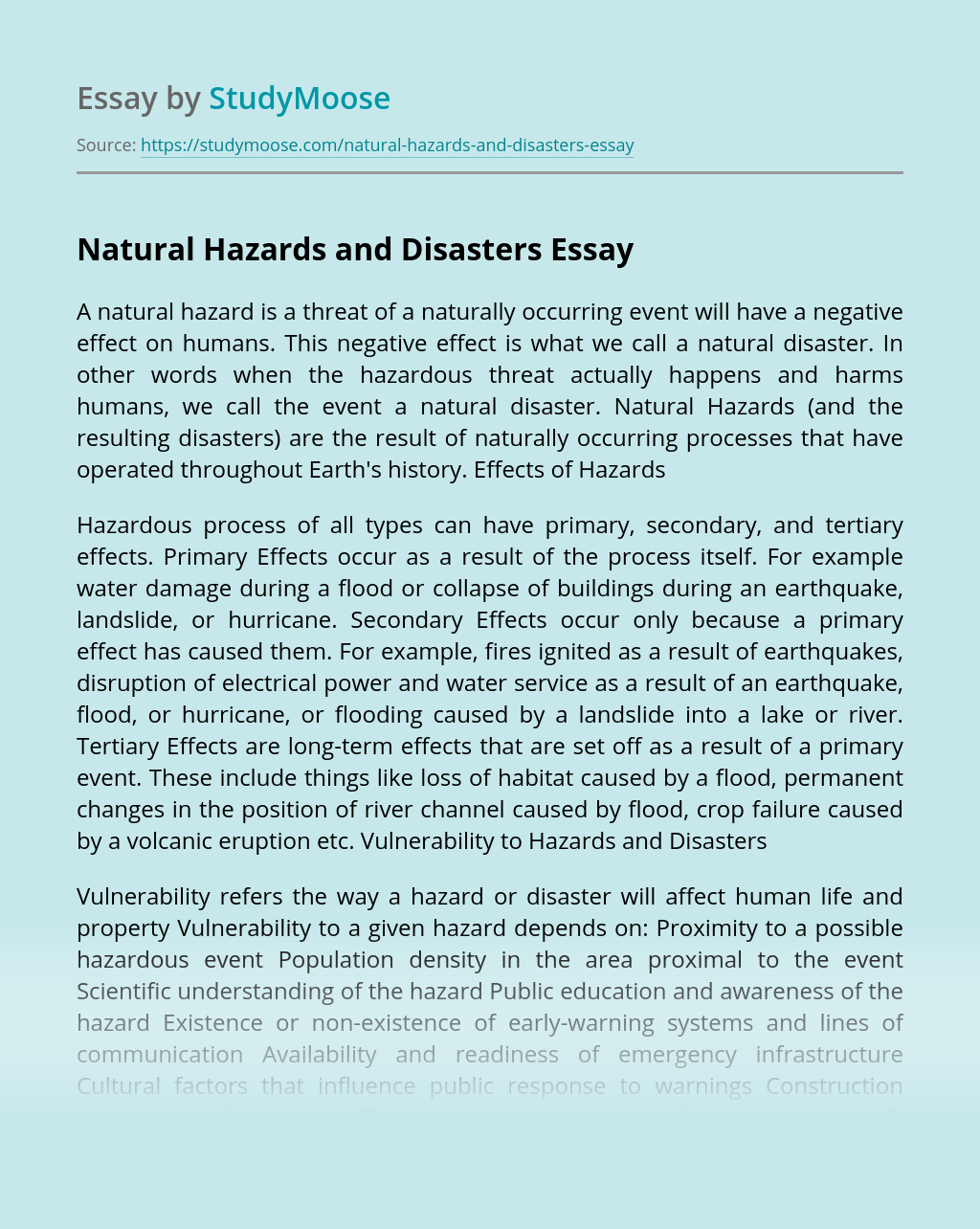