Hazards and Benefits of Science and Technology

The last two centuries have seen monumental changes in our lives, brought forth by advancements in science and technology. These advancements have their hazards and benefits in the society. It is these negative and positive impacts that this paper will be looking at. Right from the days that men discovered how to make fire, discoveries have come streaming our way at an amazing rate. Telephones, cars, rockets and computers have all been brought by science. Undeniably these inventions have made our lives better and tolerable.

Don't use plagiarized sources. Get your custom essay on
“ Hazards and Benefits of Science and Technology ”
Get custom paper
NEW! smart matching with writer

The benefits reaped throigh the inventions in medicine cannot be underscored or under estimated. It has helped us to cope with our bodies and health in uncountable ways. The benefits of medicine now can enable us live a full life with the best health possible. Many epidemics in the early days caused immeasurable human sufferings and losses of untold magnitude, and so too could small pox and polio have done had it not been for science, leading to a discovery of effective vaccinations.

Medicine is saving lives and giving patients a second chance to live. A heart surgery and a transplant had always been unimaginable and a patient with a heart ailment was considered to be living his/her last days. This however changed in the 20th century when the first heart transplant was conducted by Bernard. Medicine continues to help us fight deadly diseases while giving us an opportunity to take control of our lives. It is just but a matter of time that pandemics such as AIDS and diabetes will have a cure.

These are just but a few examples of how medicine, occasioned by advents in science and technology, is benefiting our lives. Technology continues to ease communication in a phenomenal way. Looking at how far we have come amazes me even more- from the days of drums and smoke to a complete different era of digital technology where almost everything is done at the touch of a button. Now it is taking only a few seconds to communicate to somebody you are separated with by seas and vast lands. The hallmark of these inventions in the communication sector is the computer.

It has revolutionalized our lives in ways that could not have been imagined before. Storage and retrieval of data has improved a lot, analysis of data and events is only now a matter of seconds. Telegraphs and tele faxes came but now they have been undertaken by the internet and mobile phones. Internet has also revolutionized research and information access which has become cheaper and fast. Business transactions are now completed at the touch of a key through e-commerce saving a great amount of time.

The entertainment industry has not been left behind, with greater inventions seeking to improve the comfort and luxury of a modern person. Looking also at the citizen security and protection also highlights the benefits of science and technology. It is now possible to predict earthquakes, foul weather and other natural calamities that may befall humanity. This ensures that people raise their level of preparedness. In the energy field, experts are looking into new sources of renewable energy.

With the day to day dangers and risks of ozone layer depletion, fossil fuel which is the lead cause of environmental depletion could soon be replaced by a more clearer and efficient hydrogen,which will be a permanent non polluting source of energy. It is clear for all to see how the inventions in science and technology continue to benefits the society in a great way. However, it is a two edged razor that also leads to adverse effects in ways that can lead to a miserable end to the humanity (Burby, R. J 15-25).

Our world today is trying to grapple with how to cope with the hazards caused by the ever expanding inventions in science and technology. Developments in the science and technology sector in the last centuries have seen an increase of global warming occasioned by the continued depletion of the ozone later-a thin layer protecting the earth from the harmful radiations of the sun. This is greatly caused by; continued use of fossil fuel, air transportation and green house technology in farming just to mention a few. This has led to a change in climatic patterns, making it unpredictably hazardous to the humanity.

The increased cases of earthquakes, droughts, floods and desertification have been attributed to global warming. Another example of the hazards brought forth by science and technology is the improvements of inventions in the art of warfare. The 20th century evidenced major inventions in weaponry used in the first and second world wars. The invention of ground and ballistic air missiles and most importantly the nuclear and biological war heads transformed warfare to another level. For the first time, human beings were faced with the reality that they could fight themselves to extinction.

This was demonstrated when the United States of America responded to the Pearl Harbor attack by the Japanese. They reiterated by using nuclear bombing the cities of Hiroshima and Nagasaki expunging thousands of lives and wounding many more. This is a living example of how science and technology can lead to a hazardous end of humans. All in all, many people are on agreement that the few isolated hazards that can result from science and technology cannot water down the benefits arising from the same. A simple cost benefits analysis indicate that humanity stand to gain more as inventions in science and technology continue to be realized.

Hazards and Benefits of Science and Technology. (2016, Sep 06). Retrieved from https://studymoose.com/hazards-and-benefits-of-science-and-technology-essay 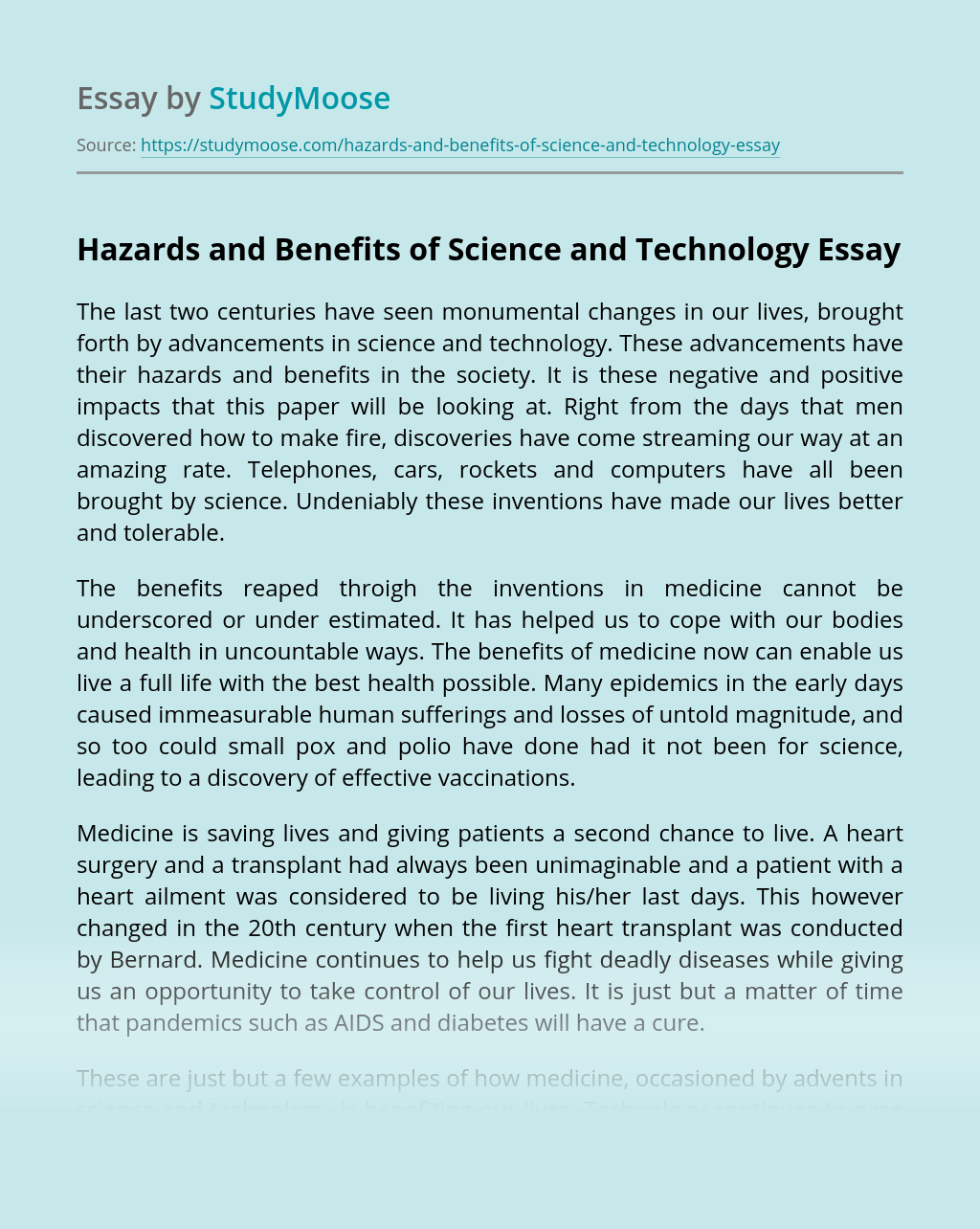